“We’re the last of the first class,” Hank McCoy (Nicholas Hoult) solemnly tells Mystique (Jennifer Lawrence), in an acknowledgement of the loss accrued over the past three films, and a expressed crisis of faith that reframes their role within Xavier’s (James McAvoy) dream. It’s a moment of reflection we don’t see enough in superhero sequels. Simon Kinberg’s Dark Phoenix, the last film in 20th Century Fox’s 19-year X-Men saga, is punctuated by moments like this. Rather than relying on the explosions, global travel and giant set pieces that led to X-Men: Apocalypse (2016) being dubbed overstuffed, or lacking focus like first adaptation of this story in X-Men: The Last Stand (2006), Dark Phoenix is held together by small interactions where two characters take time to debate, to contemplate and to work through moral issues in a way that limits the film’s scope to what at times feels like a stage-play interpretation of a superhero film.

A lack of urgency in this era of quick-paced superhero films that aim to make every moment top the previous, either by way of action, jokes or stakes, is a tough sell. While Kinberg’s decision to go with a quiet epilogue instead of a grand finale isn’t earning any favor with film critics (and it is struggling at the box office), Dark Phoenix’s intimacy is a refreshing change of pace that outweighs its issues.

It’s odd that a film adaptation of a story as iconic and epic as Chris Claremont, Dave Cockrum and John Byrne’s Phoenix Saga should be associated with a limited scope, but the chamber piece-esque perspective on the X-Men provides denouement we’re so rarely afforded. We expect superhero sequels to grow bigger and bigger as they go along, with the hopes that they culminate in something as epic as Avengers: Endgame. Regardless of how much we love superhero cinematic universes, there is often an emotional shorthand at play, one that doesn’t always allow for breathing room so that characters and audience members can sit with a loss or question decisions. But Dark Phoenix, taking a page from Logan, goes for a more restrained route. It breathes deeply, slowly, while denying us that whoosh of an exhale. While not nearly as assured as Mangold’s film, and more than a little self-aware of being unable to beat the mighty MCU in scale, Dark Phoenix is far more interesting and coherent a film than its being given credit for.

The X-Men have won, and the film opens with them embraced by society, seen as superheroes for the first time. But what happens when they’ve earned the respect of the world and there are no more villains left to fight? This is the scenario Dark Phoenix presents, one that sees the X-Men divided not only about what to do about Jean Grey (Sophie Turner) and her newfound power surge, but where to place the blame. It’s dramatic, and at times a bit soapy, and even though it strays far from the source material, it recognizes that if there’s one thing the X-Men have consistently been across the past nearly 60 years, it’s dramatic. 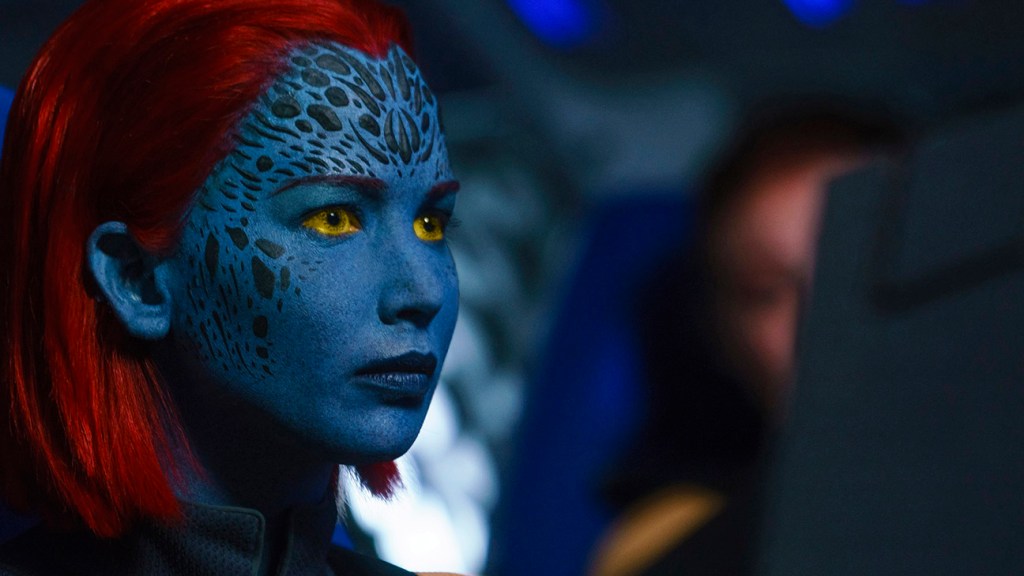 An early conflict arises in the film when Mystique confronts Xavier about risking their lives in order to serve his own ego. His counterpoint is that by risking their lives for humans they become embraced by a society that could revert back to hating and fearing them with any wrong move. Mystique claims he enjoys the positive attention and Xavier admits that he does, but only because it’s what he dedicated his life to. Both characters are right, though Mystique is arguably limited in her vision and Xavier manipulative in his. This argument sets the stage for the film’s entire conflict built on the minor distinction between ego and self-preservation, and how the two concepts overlap within a space where they create major distinctions between right and wrong. Self-preservation can manifest as the most egotistical thing in the world, but that doesn’t necessarily make it wrong. We see the other, gentler side of this argument in the aforementioned moment between Hank and Mystique, where Mystique suggests they could leave the X-Men behind and start their own lives and Hank convinces her to stay. It’s a less pronounced conflict than the one Xavier and Mystique had but in it the stakes are mirrored, rather than escalated. 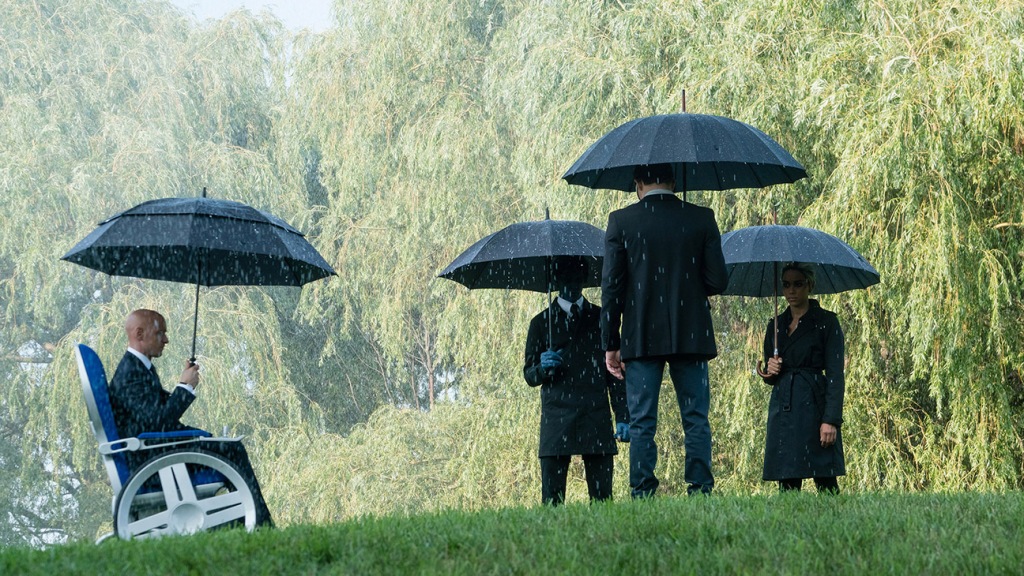 These mirror conversations happen throughout the film. Jean confronts her father at the end of the first act and he admits he gave her up because he had no hope of controlling her powers, no hope at a sense of normalcy. The scene gets to the heart of parental fear aspect of the X-Men in a way that feels more natural and contemporary than the on-the-nose “can’t you try not being a mutant” scene in X2 (2003) ever could. The scene feels like more than lip-service to the social allegories at play, and instead an honest admission to humans’ very real need to feel a sense of control and normalcy and the failure to do so creates an emotional impotence, a complete lack of ego.

When Jean goes to find Magneto (Michael Fassbender) living on an island he’s been given as a mutant homestead, he rejects her even after she points out that they’ve both done terrible things. Magneto’s rejection of Jean comes from a similar place as Jean’s father in that her presence disrupts the normalcy he’s carved out for himself, the barrier of self-preservation. Magneto, whom Fassbender has presented with a kind of scenery-chewing relish over the series, is calmer here, subdued. It’s not that he’s without ego, rather that his ego has changed and he wants to protect his people rather than risk their lives. It’s only when he learns of Mystique’s death from Hank that he is driven to take revenge. But even then, he only brings two of his mutant followers with him, suggesting this need to protect his new nation is an inherent part of him now. In many ways, Magneto and Xavier find themselves on opposite paths from where they started in X-Men: First Class (2011).

Jean’s betrayal by three fathers, her biological one, Xavier, and Magneto, leads her to a new mother, the alien Vuk (Jessica Chastain). Vuk embraces Jean, but only to control her Phoenix powers and use its life creating abilities to make a new home for her race. She’s ego and self-preservation taken to their heights. Yet, her end goal for a new world is not so different from Xavier’s or Magneto’s. But she isn’t limited by any sense of morality in achieving her dream. Her desire to control Jean is more direct than Xavier’s, who acted to protect her and because he overestimated his own abilities. Her lack of consideration for Jean’s life is cold when compared to Magneto’s passion.

Vuk’s alien nature is impersonal and as a result it makes the personal drive of the mutants, to either save or kill Jean, all the more human. Who does killing her or saving her benefit, and what’s the moral rationale behind either option? Is Xavier’s desire to save Jean a means of saving himself and erasing some of the blame in his role in her change? Is it altruistic? Or is it another moment to prove his heroism to humans? Do Hank and Magneto’s desire to kill her come from any place other than vengeance? Do they think that this act will make them any better than her, or lessen their own roles in Mystique’s path towards death?  Ultimately, these questions only prop up a decision that Jean has to make for herself by severing the limits of control others have placed on her, and deciding where ego and self-preservation meet for her.

Rather than rise on a steady incline, Dark Phoenix circles its narrative, drawing tighter and tighter until the end, but never straying from the single central idea that first started the film. Is the dream of a better world achieved through insular, and cautious self-preservation? Is it through the egotistical belief that costly decisions, ones that create emotional detachment, ultimately allow control? Or is it a mixture of both? Dark Phoenix is a chess match waged with distinct methods. The stakes remain largely the same from beginning to end, but there’s investment to be had in the old-fashioned drama of it all.