For the past 18 months, a river of money has been flowing between Detroit and Silicon Valley. In March 2016, GM spent $1 billion to acquire self-driving car startup Cruise Automation. More than 10 automakers, including Tesla, Audi and Mercedes-Benz, have set up autonomous vehicle development labs in Silicon Valley. Even Apple has its own model in the works, seen driving itself on the Cupertino streets of the new $5 billion Apple Park campus. With an estimated 21 million new connected cars (or vehicles with internet access) on the road in 2017 in the lead-up to fully autonomous vehicles hitting the streets over the next decade, it’s no wonder that a 2016 Ernst & Young report projects that in-car streaming entertainment could bring $20 billion in incremental revenue to the industry.

“Our mobile lifestyle is expanding into cars — that is the next journey for entertainment. Hollywood is an important part of that discussion,” says Ted Schilowitz, futurist at Paramount Pictures. He points out that while passengers will continue to use personal mobile devices, a self-driving car could deliver a more sophisticated offering of movies, TV and games as well as emerging platforms such as virtual, augmented and mixed reality. In a driverless car, “there’s a lot of real estate,” says Schilowitz. “If you look at the windshield and windows, they are ‘screens’ at the right distance to be entertainment portals. Can the windshield be the movie screen of tomorrow?”

Right now, the technology is in a development stage. Says Alex Hilliger, advanced engineer at Mercedes-Benz Research & Development North America: “We’re re-envisioning the automotive experience. The vehicle could have a lounge atmosphere, and the passengers face forward or backward. If you don’t need a steering wheel or driver’s seat, the car can be a new space.”

The broadcast industry is positioning itself for this scenario: Its next-gen broadcast standard (known as ATSC 3.0) brings together internet and live over-the-air signals with mobility for delivering video-on-demand content, Ultra HD (4K resolution) and High Dynamic Range TV. “In cars, that might mean riders view network or new types of programming,” says ATSC spokesman Dave Arland. “Broadcasters are interested in conversations with automakers. ATSC 3.0 is a very big [content] pipe into the car.” 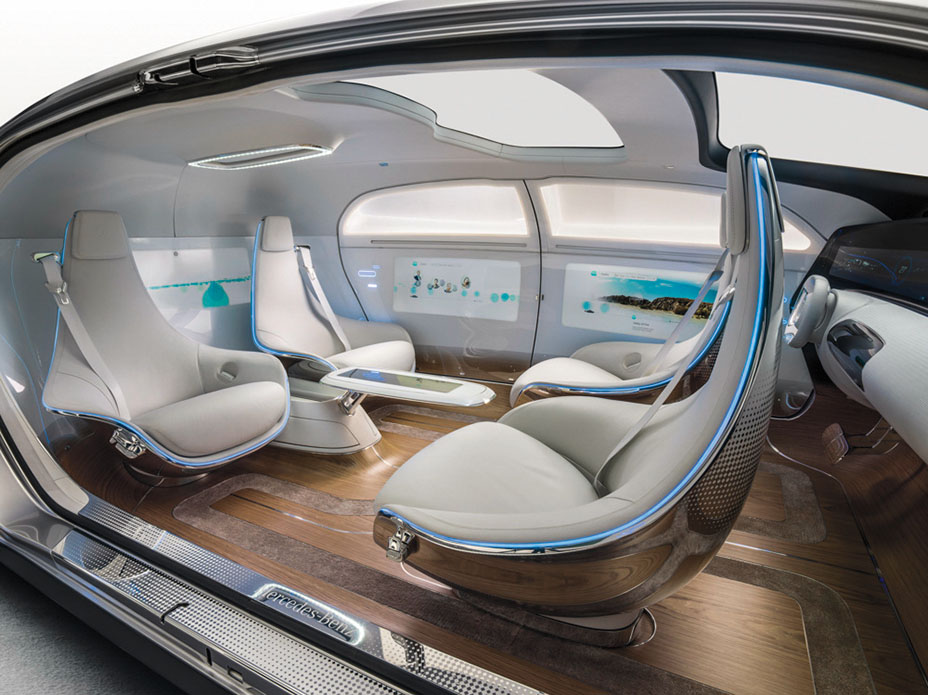 Though it will be a few years before the technology is widely used, “deployment will start almost immediately,” as the first version is expected in the fall, says Arland. Revenue models will be in place even sooner: “We could deliver interactive, geolocated advertising based on nearby shops, restaurants and businesses,” says Dennis Wharton, executive vp at the National Association of Broadcasters.

With such capabilities, experts are wondering if in-car entertainment services — like in-flight entertainment — are on deck for driverless vehicles. Says Schilowitz: “Multiple studios are looking at this and meeting with strategic partners. I’d guess that they are all looking at it.”

Viewing a movie that has been edited and packaged for in-car consumption is only the tip of the iceberg: Think content customization prompted by facial, voice and gesture recognition. “Artificial intelligence will be permeating every aspect, from monitoring what’s going on outside the vehicle — making sure the road is clear and safe — to a robust in-car AI system that recognizes who is in the car via facial recognition,” says Danny Shapiro, senior director of automotive at tech developer NVIDIA. “The content personalization possibilities are endless and will be based on a voice-activated and gesture-based system. The telcos, content providers, game developers and e-commerce companies will be transacting business within the car. We’ll also see new types of interfaces — we can even turn the whole interior of the car into a holodeck.”

THR's Full Animation Roundtable Now Available on 'Behind the Screen'

Ron Howard to Be Honored by Sound Editors