As positive social media reactions roll in for Disney’s live-action reimagining of its classic animated film, Green has a lot to be proud of as she not only flew Dumbo but conquered her deep-rooted fear of heights in the process. The Casino Royale star plays aerialist Colette Marchant, and much to Green’s dismay, director Tim Burton requested that she perform some of Colette’s aerial stunts.

After a couple months of rigorous training alongside circus performers and acrobats, Green realized that she just might be able to pull off the impossible.

This is Green’s third collaboration with Burton, and the actor has become known for stepping into highly stylized worlds. But she first broke out in a grounded and hard-edged reboot, 2006’s Casino Royale. Green’s star-making role of Vesper Lynd helped launch the Daniel Craig era of Bond films, and her performance still has many 007 enthusiasts ranking her as the preeminent “Bond girl.”

Oddly enough, Green nearly missed out on her breakout role after turning down an audition nine months prior to actually getting the part. By the time producers returned to Green, production was looming and Angelina Jolie and Charlize Theron were also in the running.

“I was probably a bit stupid or naive. I said, ‘Ugh, a Bond girl? What kind of prissy girl is that?’ They also kept the script secret,” Green tells The Hollywood Reporter. “So it wasn’t until they gave me the script [nine months later] that I realized it was a meaty role. I didn’t see her as a Bond girl. She’s a strong character; she’s got cracks.”

In a conversation with THR, Green opens up about working with Tim Burton for the third time, her reluctance to return to her native French accent for Dumbo, and her fondness for Bond producer Barbara Broccoli.

Clearly, you thrive alongside Tim Burton since Dumbo is your third film together. What makes his sets such a fertile environment for you to create?

First of all, he’s such a kind man. You feel safe as he always wants the actors to feel comfortable. There’s never any judgement or anything like that. His sets are very playful. You don’t have the pressure or the tension that you might have on other projects. He just trusts you; he lets you be free. He also has a very particular way of communicating as well. He would draw and say, “This is how I see the scene.” Suddenly, off we go. It’s just a fun way to be working.

Would you say that he’s an actor’s director? Does he spend a lot of time on performance?

He’s not the king of words, and I, myself, am not the queen of words. He is a more physical director; he speaks with his hands. You kind of understand what he wants with the vibe that he exudes. It’s a very particular way of working, and it’s difficult to explain, exactly. It’s more visceral.

With the exception of Dumbo himself, this film was mostly shot in-camera by way of practical sets and effects. I presume fully realized sets only complement your performance?

Totally. The sets were so complete, which is quite rare. Now most sets are very minimal with lots of greenscreen and just a few props. But with Dumbo, you felt like you were going back to the golden era of Hollywood. It was so big with all the extras — and very colorful and vibrant. We even had a jazz band so you could really get into the mood. When all the characters are in the car and driving through Dreamland, it was really, really magical. 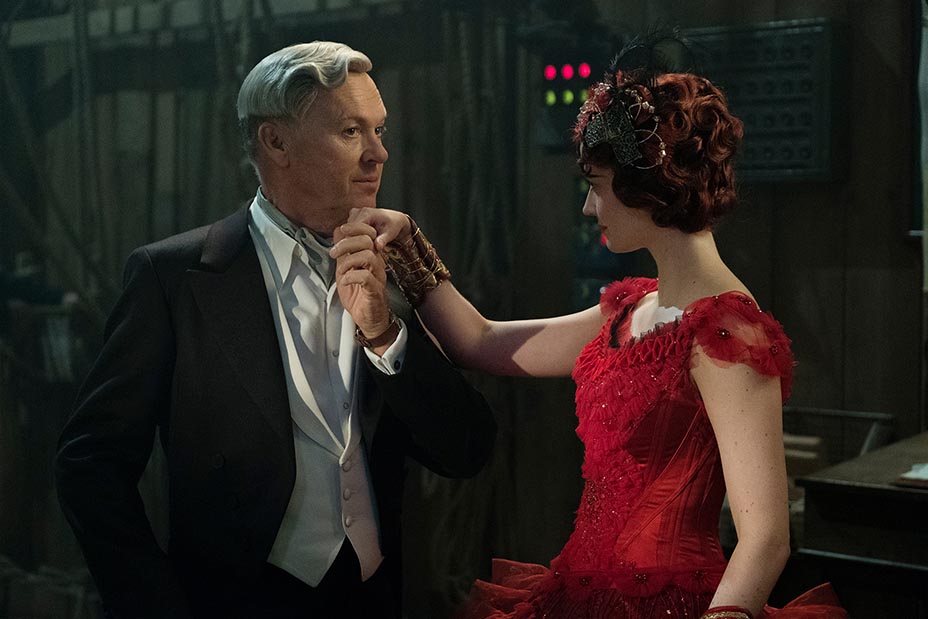 Do you find a personal connection to your characters including your Dumbo character, Colette Marchant?

As an actor, you always use your own self. It’s your instrument; it’s your body. Of course, there are bits of me in her. It’s an interesting character; it’s also somebody that I’ve never played before. It’s somebody much clearer and lighter than the characters I’ve played in the past. She’s fun to play; she’s haughty and cold at the beginning. And then she gets to see Dumbo fly, which changes absolutely everything. She will do absolutely anything to help Dumbo and reunite him with his mum. It’s a very sweet story, and Colette is a fun, playful character. 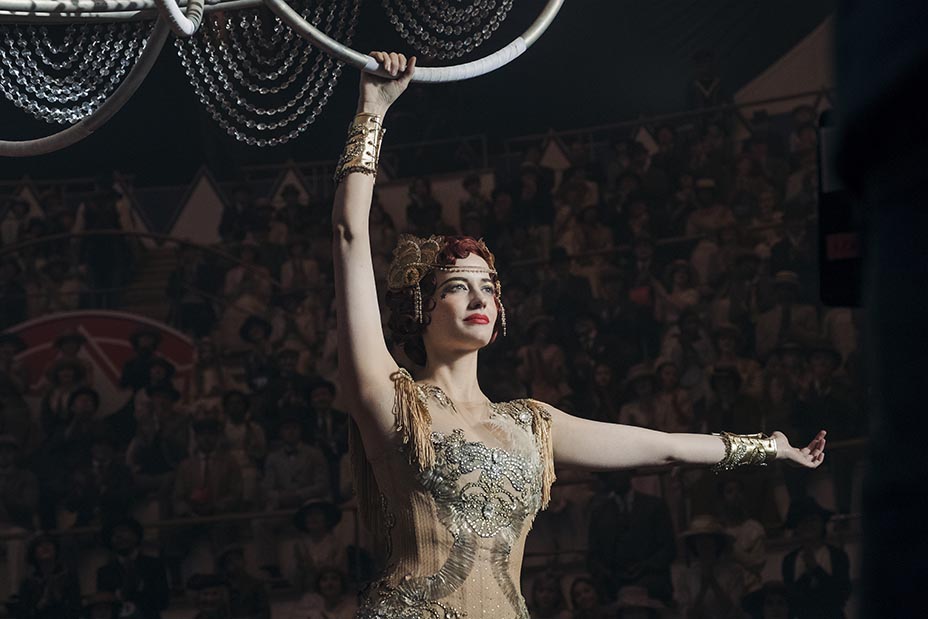 You’re afraid of heights, and yet you’re playing an aerialist. You actually did some of Colette’s trapeze artistry in the film. Were these stunts as terrifying as you expected? Do you ever forget about your own fears when in character?

My fear of heights and swinging is really serious. Even as a child, I couldn’t get on swings at 4 years old. It was a real issue. Roller coasters — I couldn’t do any of that. So when Tim said I would have to do some of my own stunts, I kind of panicked. (Laughs.) He said, “You’re gonna train for a couple months with circus performers, and we’ll see how we go.” I was secretly hoping that, at the end, he’d use the body of an acrobat and add my head in post (Laughs.). But then I started training seriously — three to four hours per day — with those amazing trainers and acrobats. Little by little, I got higher and higher. It was a very hard thing because it requires a lot of strength as well; it’s not just fear. So, on top of it, you have to get really strong –– core and arms. The circus people were just so dedicated and gave me lots of confidence. We went quite step-by-step, and I can’t believe I managed to do those things. I always thought I would be afraid of heights for life, and it’s really in facing my fear that I was able to overcome it. I’m very proud of myself on that one. 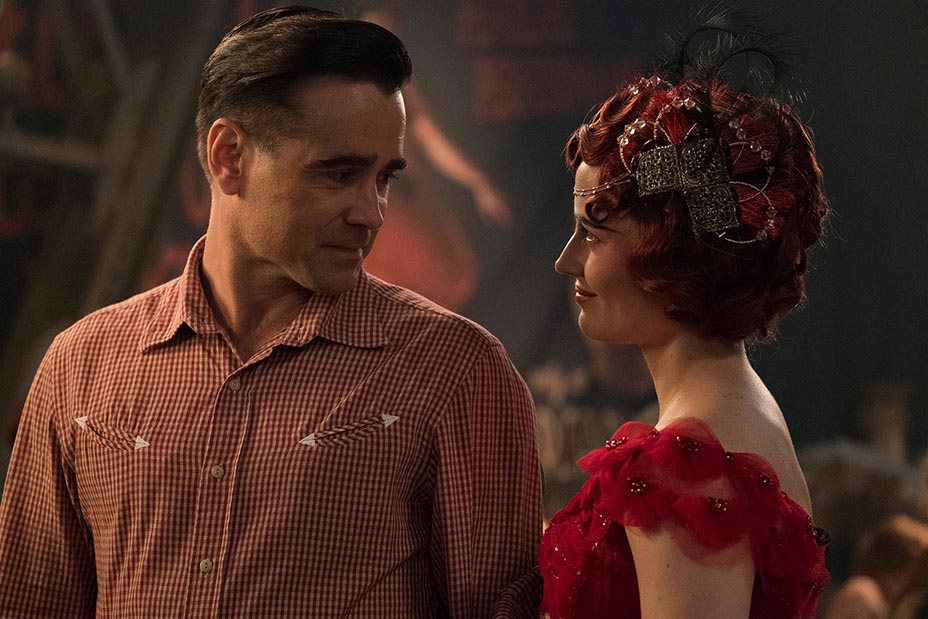 It’s funny because I remember I had a lot of pressure from the studio on Casino Royale to get a British accent. So I worked really hard to get rid of my French-ness. Now I live in London, so to go back to the French thing would be unnatural. When Tim said, “She’s a very French character, and it would add some color if you had a French accent.” And I said, “No, I can’t go there!” (Laughs.) It’s interesting because it’s actually the perfect accent for Colette. It helped me to create who she is. It suddenly changes everything when you have an accent. As an actor, it’s really wonderful to be able to play with your voice; you get out of yourself. So, that was actually very helpful.

Do you still need a dialect coach for your British and American accents since you do them so well? Or, is it something you have to keep doing in order to maintain?

Absolutely. British is the easier accent for me, but the stressors are very, very different in British than French. So, I sometimes don’t know which words to stress. Sometimes, I’ll still have the demons that come back. I think people really underestimate how much work it requires. Also, my name is Green, so it’s very misleading. I just did a project in New Zealand where I had to play an American. So that was yet another challenge. As I said, it’s such a wonderful thing to work on accents because it’s not you.

You often perform in worlds that are quite glamorous and stylized, even Gothic in some cases. Is atmosphere a big factor in your decision-making? Or do the characters that speak to you just so happen to exist in these lavish worlds?

When I read a script, it’s true that I always look at my character on a narcissistic level. Is it meaty enough? Is it interesting enough? Can I sink my teeth into it? Usually, I like layered, complex people, where there’s a journey. Of course, with Dumbo and Tim Burton, you know it’s going to be an otherworld. Yeah, I like playing different characters; of course, I use a bit of me. But, it’s true that I like something that is bigger than life. It’s such a wonderful thing when you’re an actor because you can explore people and travel a lot. It’s kind of an accelerated therapy.

When it comes to Vesper Lynd and shooting Casino Royale, what are some of the smaller moments or memories that you can’t seem to forget?

It was such a big movie — a big machine. I was new and very nervous. I very much remember the love of producer Barbara Broccoli, actually. She’s one of the best I’ve worked with, I have to say. She has so much heart and she really took me under her wing and protected me. Of course, she’s at the head of a big machine, but what I love about her is she cares. It’s not just money; she’s quite rare. Due to that love, it was very wonderful — and of course, all the traveling. My first scene was in the Bahamas so I had to pinch myself. Then Venice and Prague. It was big in a beautiful way.

You originally said no to an audition nine months prior to actually getting the role of Vesper. Do you think your rejection made you even more desirable to Casino Royale producers, which would explain why they returned to you? Basically, you played hard to get.

(Laughs.) Rejection is always desirable in any field, I think. Yeah, it was not on purpose. I was probably a bit stupid or naive. I said, “Ugh, a Bond girl? What kind of prissy girl is that?” They also kept the script secret. So it wasn’t until they gave me the script that I realized it was a meaty role. I didn’t see her as a Bond girl. She’s a strong character; she’s got cracks. I liked her, so of course I’ll go and audition.

Even though you haven’t appeared in person, Vesper’s presence is felt throughout the remaining films. Has a cameo or flashback ever come close to fruition?

I heard rumors and stuff like that, but it’s such a hard one when you bring back a character in a flashback. It can look a bit cheesy. Of course, Bond cannot turn into a horror movie where I come back from the dead. (Laughs.) Although, that could be interesting. When there’s a love story as strong as it was, I think it’s better to leave it as a beautiful through-line. 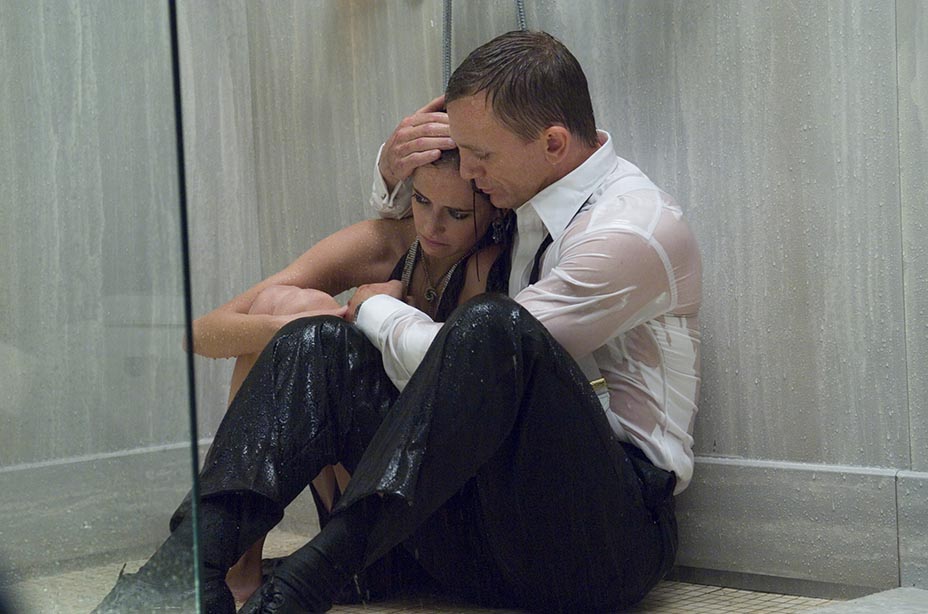 When Vesper was traumatized in the shower, was the water temperature actually set to cold in order to help sell Vesper’s trauma and how cold she was?

(Laughs.) It was a good temperature.

Vesper was shivering, so James asked if she was cold before adjusting the temperature.

I remember thinking that Vesper was more cold on the inside because she was traumatized.

I would say Snow White and the Seven Dwarfs; that’s one of the first. Dumbo was not far behind. Those two really marked me as a child. I love the old Disney movies. They had some beautiful darkness.

Is Tim Burton Returning to Form With 'Dumbo'?