[This story contains spoilers for Glass]

M. Night Shyamalan is no stranger to controversial endings, a trend that can be traced back to 2000’s Unbreakable.

Unbreakable, now considered one of his finest works, initially received a divided response, something the filmmaker credits in part to its downbeat conclusion, which saw Samuel L. Jackson‘s Elijah Price revealed to be a villainous mastermind.

So perhaps it’s appropriate that 19 years later, the writer-director has crafted an ending that is sparking a divided response again with Glass — the conclusion of a three-film journey that includes Unbreakable and 2017’s Split. Shyamalan conceived of the Glass ending years ago while working on Unbreakable, but he wasn’t sure if he’d have the guts to pull the trigger on it.

“I didn’t know whether I’d have the fortitude to keep going and do it, but I’m so glad that I did,” Shyamalan tells The Hollywood Reporter.

To reiterate the above warning, there are spoilers for Glass‘ ending below.

Though Glass teases a big confrontation on the top of the tallest building in Philadelphia, that never happens. Instead, David Dunn (Bruce Willis), Kevin Wendell Crumb (James McAvoy) and Mr. Glass (Jackson) have their final confrontation outside of their psychiatric hospital — where they meet their ultimate fates. It’s a move that not only goes against audience expectations, but one that actively encourages the audience to anticipate something it won’t ultimately get. The film ends with its three superpowered men dead, but with Mr. Glass getting the last laugh; he’s arranged for footage of their battle to be distributed around the world, thus informing humanity that superpowered beings are among them.

That ending has been a point of contention among critics and film journalists. Some love it, some don’t. But test audiences fully embraced the ending, says Shyamalan.

“They just were not polarized in any way by anything that we just mentioned,” Shyamalan says when asked about the lack of a giant showdown. “It was one of my highest testing movies ever.”

In his conversation with THR, Shyamalan also discusses why he doesn’t spend time focusing on negative reviews of Glass, his choice not to expand the franchise beyond this film, and his decision to mortgage his property to fund the film himself, which is headed for a $47 million four-day weekend.

How many drafts did you go through as you were writing Glass, and what did you learn along the way?

It was one of the quickest screenplays. Signs being the quickest screenplay. I think that the buoyancy of both films probably added to that. If you think about all my movies, those two are probably the most buoyant. They are kind of fun and with a wink kind of thing. When I write like that, the engine is a little bit less clogged up. When you are dealing with darker, earnest stuff it’s harder to navigate a bit. I would say my memory is seven drafts…. Maybe there was an eighth draft. Signs was six. So, I think this one was seven. 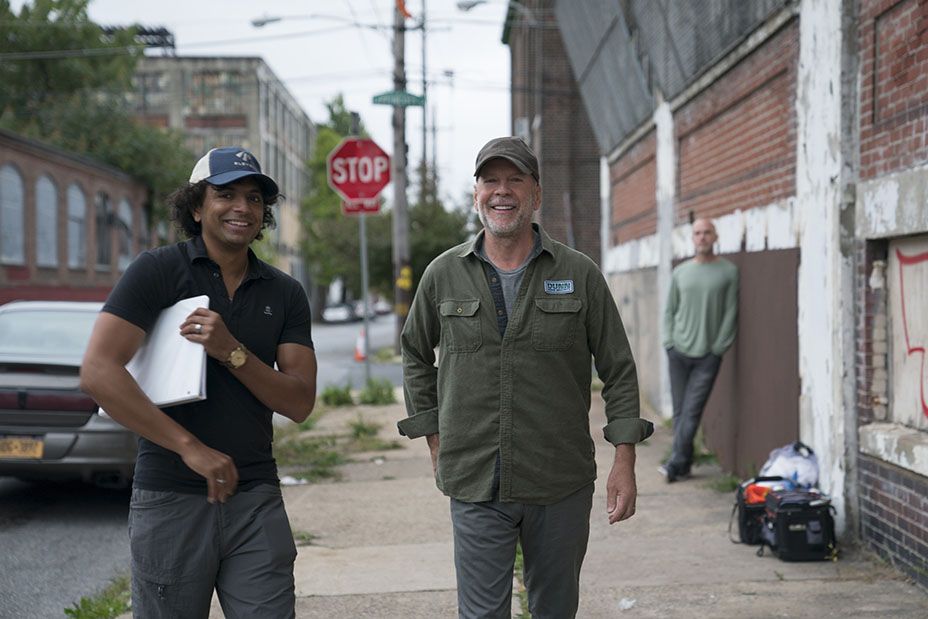 How much has your vision changed from 19 years ago? Did you have the ending to Glass in mind back then?

I did. I didn’t know if I could have the balls to do it. But I did. That was in my head and I kind of said, “Maybe we could do this at the end” and chuckled about it. Can you do that? I didn’t know whether I’d have the fortitude to keep going and do it, but I’m so glad that I did.

You want to convey to the moviegoers that the things that interest the filmmakers here aren’t necessarily about any opportunism involved. This wasn’t that. That’s obviously unusual in the marketplace. Just because there is an opportunity we’re not going to take it. If you took that off the table. Closure is important to me, as a narrator, as a storyteller. How do we get to a definitive end so that you understood someone had something to say specifically and not then continuing. It’s always been on my mind how to do this. Obviously, I’ve never done a sequel before and wanting to make sure it was from the right motivations, from the characters themselves and that world and keeping a certain level of purity about it. I think that the shelf life of the three movies will increase dramatically because of it. 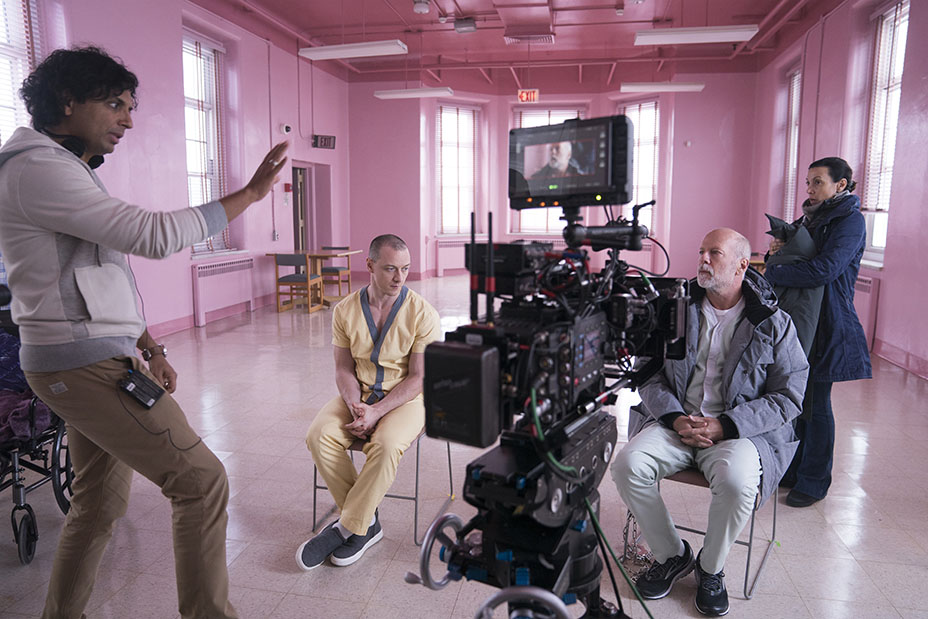 Unbreakable was seen somewhat as a disappointment at the time. Had it made as much money as The Sixth Sense, perhaps this trilogy would have been completed a decade ago. Then again, waiting may have made the trilogy richer. Have you given thought to those pros and cons of that?

A couple things came to mind when you said that. Partly it wasn’t really as much the money it [Unbreakable] made as it was the reaction to the movie. The reaction to the movie was very polarizing and very mixed. It was hard to understand what it was. They didn’t understand that it was about comic books or that that was even a thing and it was a weird, somber movie. It had a weird, dark, downturn ending where somebody you liked turned dark and became the villain. It was a lot of taboo things that were being done there.

The audiences, the journalists, the critics, they didn’t know how to take it. So, it kind of had a wonky reception. And that’s the thing I’m reacting to more than the numbers. The audience is not really embracing it at the time and as it had time to marinate, it grew. It kind of stayed and stayed. The resonance of it. That was wonderful and rewarding to see that happen.

Having nostalgia now as part of the trilogy, because of the time that has passed, has added a wonderful new color to the piece. And being able to see characters do multiple generations in one trilogy is really beautiful. And kind of touching. It gives it a certain kind of pathos it might not have had before. To see a child who has grown up until a 30-year-old man. Or a man in his prime who is now an older man. And all of those touching things that you don’t want to manufacture but you get to see now juxtaposed against each other. I think also another side effect of waiting was that I could have a more meta conversation about comic books because it’s become so culturally significant. Being in an institution where people think they are comic book characters is possible! If you and I heard that there was an institution in the Mayo Clinic somewhere, you’d be like, “Oh yeah, that makes sense. I could see how people would think that.” 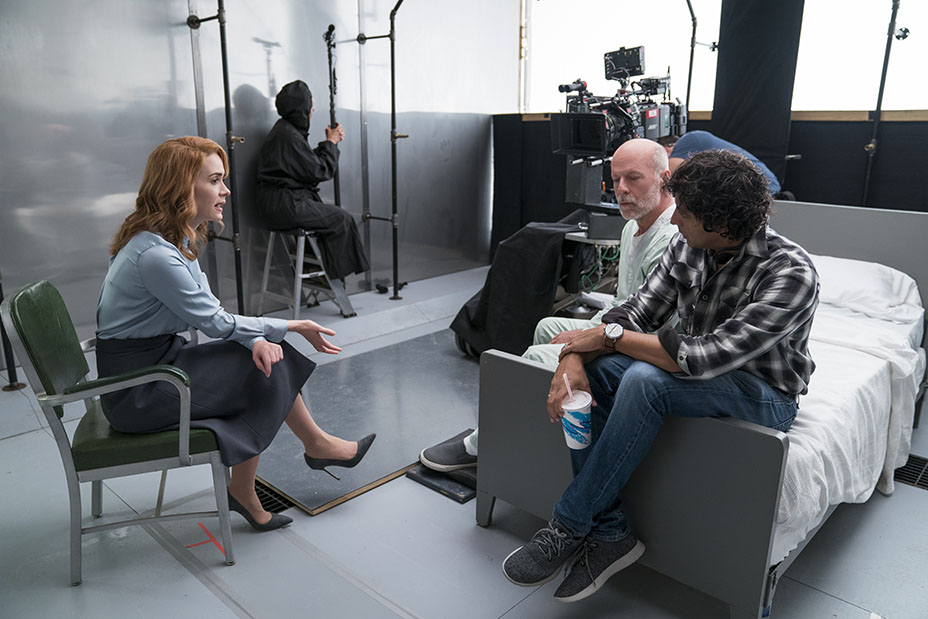 I chose. Both studios [Universal and Disney] wanted to pay for it and, in fact, they were like, “Just take the money! Do it normally.” And I was like, “No. let’s not do that.” It’s hard to explain. Some of it is emotional for me and everyone on the movie. You should be coming for the right reasons. If you are coming for a payday up front, that’s not for the right reasons. I’m happy to make money, but only if we deserve it. And if our partners made money. I’m not scared of not having that crane or not being able to shoot at that location or not having 10 10Ks on the set all the time ready for us anytime we need. I’m OK with that. So who else is OK with that? You find those crewmembers and those actors that are willing to come and do it kind of old-school way. And for me, when you get rid of all of that, you make a tighter crew, a tighter cast and there’s more commitment. It’s hard to explain, but it’s a philosophical thing as well.

I’m sitting here right now today [Monday, Jan. 14] and the movie is going to open Friday and I’m out a lot of money! It better go well on Friday. I’m nervous. I’m scared. And that’s what you want. I’m nervous on the set I’m nervous when I’m writing. You want no safety. It’s a way of tricking you into not being complacent. If you know there is no safety net, then when you are falling asleep you go, “Oh, wait, wait I know what’s wrong with that scene” and it pops in your head and you just keep on working on it. 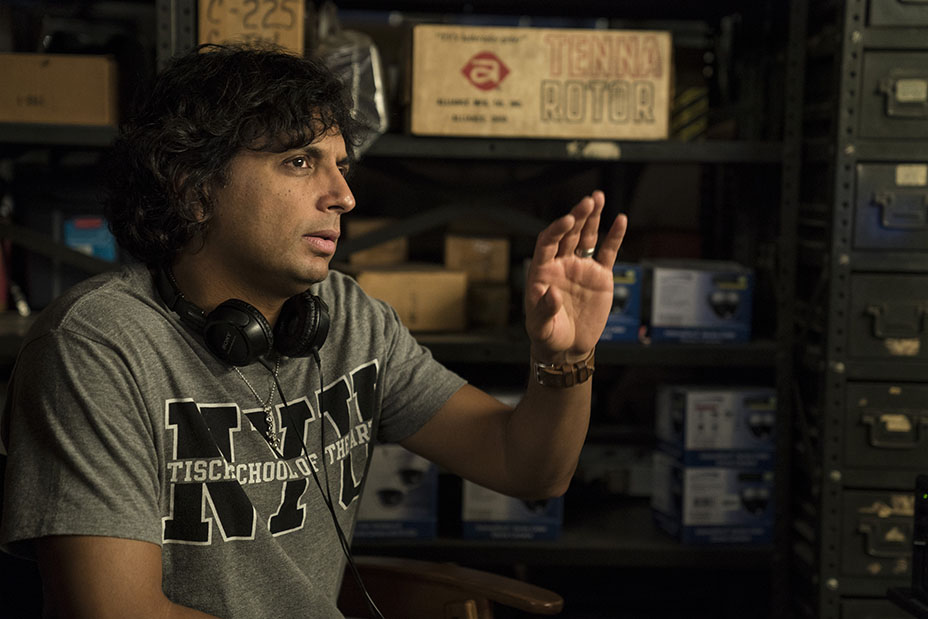 What did you learn from test screenings for Glass? Did audiences go with the ending, in particular, the fact that there is no big showdown on top of a building?

The test screenings were really crazy. We did do them and they were crazy because audiences just went with us. They just were not polarized in any way by anything that we just mentioned.… It was one of my highest testing movies ever. This thing we are talking about [the ending] was refreshing to them. That we were doing the opposite of everything. It was really contained and it was unusual and thought-provoking.

Normally when you do test screenings, there’s a fan of reactions, meaning a spectrum of reactions from “excellent” all the way to “poor.” We were getting no negative reactions of any kind, and I think that’s attributed to the anomalous nature of doing the subject of comic books in a weird and strange different way. And they are ready. They get the other thing every six weeks, so this is something that’s different. That was the gamble and I was really pleasantly surprised with the audiences.

There seems to be a divide between audiences and critics. Have you given thought to why that is? It seems possible that this is an Unbreakable situation, where perhaps the film’s stock could rise over the years.

Definitely don’t want to comment on that [the reviews]. That’s not my purview. The less energy spent in that arena the better. All of it should go toward making the highest quality audience movies that I can possibly make. Really pushing cinema to tell accessible stories. That’s the balancing act I’m trying to study and learn over the years.

Do you have a favorite moment from Glass?

The pink room was a big moment. An 11-minute therapy scene with all of the stars battling it out and the movie is kind of very influenced by One Flew Over the Cuckoo’s Nest and the idea of doing a comic book version of it was always super interesting to me. They get to showcase some of their great talents in that scene, and I enjoyed shooting it.

'Glass' Was Always Building Toward This Ending