[This story contains spoilers for Godzilla: King of the Monsters.]

There are two contemporary Godzilla movie franchises, and they’re both about the end of the world — as we know it, anyway. You probably know about the live-action English-language series that began in 2014 with Godzilla and then continued in 2017 with Kong: Skull Island and now Godzilla: King of the Monsters. But there’s also a Japanese-language animated trilogy that Toho produced and Netflix released over the course of last year. In both series, Godzilla is a representative of a very pissed-off Mother Earth, who is now intent on getting rid of us after centuries of ecological self-destruction. Humanity is an infection — so says Vera Farmiga’s Dr. Emma Russell in Godzilla: King of the Monsters — and Godzilla (and his kaiju pals) are the planet’s antibodies.

Both Godzilla franchises are uneven, but they’re satisfying for the way their creators re-imagine Big G as a metaphor for the violent terrestrial changes we’ve forced the planet to undergo during our brief time as the dominant species. But while the American Godzilla movies are more impressive for their spectacular monster fights and (in the case of 2014’s Godzilla) human melodrama, the Toho-produced anime trilogy — like the impressive 2016 political satire Shin Godzilla before it — is much more ambitious than the American series, which has taken a few noticeable steps back with Godzilla: King of the Monsters after the generally superior Godzilla (2014).

In King of the Monsters, Godzilla is put on a pedestal: at the film’s end, his fellow kaiju all literally bow down to him after he trounces the malicious Ghidorah, a three-headed dragon and the genocidal weapon of choice for an eco-terrorist group  led by Charles Dance’s angry (but polite) Jonah Alan. Using a Doolittle-like sonar doodad, Alan’s group seeks to restore balance to the planet by unleashing Ghidorah, who, at their command, psychically orders his fellow monsters to go on a global rampage.

Godzilla’s absolute victory is, in this context, weirdly dissatisfying. Director Michael Dougherty and co-writer Zach Shields provide a pat, reassuring conclusion to a story that began with discomforting questions about humanity’s cosmic insignificance. Farmiga’s character gives voice to those concerns, but she pretty much comes to her senses by the end of King of the Monsters, when she distances herself from Alan’s gang and rejoins her estranged family, led by know-it-all ex-husband Mark (Kyle Chandler). King of the Monsters is a comedown after Godzilla, since its human melodrama (Save the earth, I mean the family!) reassures viewers that not all monsters are capital-B Bad: some are good enough.

King of the Monsters is also a throwback to a monster movie formula established by decades of entertaining but conventional sequels. That retro mentality pays off during reverent and tense (though not always visually coherent) action set pieces. But even these scenes are a little diminished by Dougherty and Shields’s staid, goalpost-shifting consideration of Godzilla‘s dark themes. Their Godzilla is both a wild animal, like the wolves that Chandler’s Mark studies, and an elder god, regaining his strength in his underwater temple. We’re told that he’s “evolving” in his R’lyeh-style home (sleeping off the beating he took from Ghidorah and powering up for the next battle), but he’s also surrounded by hieroglyphics and mural art that confirm Emma’s reading of Godzilla as an ancient deity. Meet the new god, same as the old god.

But wait, hang on: If Ghidorah is a “false king” (as Emma says) and the other monsters all bend the knee to Godzilla, doesn’t that make Godzilla more than just a generic symbol of “natural disaster,” to borrow a phrase from actor Ken Watanabe? Watanabe’s sad (but patient) scientist Dr. Serizawa sacrifices himself for the greater good, detonating an atomic bomb that gives Godzilla the steroids-like boost — an analogy borrowed from Bradley Whitford’s snarky (but mild) Dr. Rick Stanton — that he needs to destroy Ghidorah. But before Serizawa leaves on his suicide mission, he insists that humanity learn to live with its mistakes, or die trying. Then he detonates an atomic bomb, thereby helping a giant monster save the day. King of the Monsters doesn’t make more sense than that, but apparently it doesn’t need to, because hey, neither did the other kaiju movies! 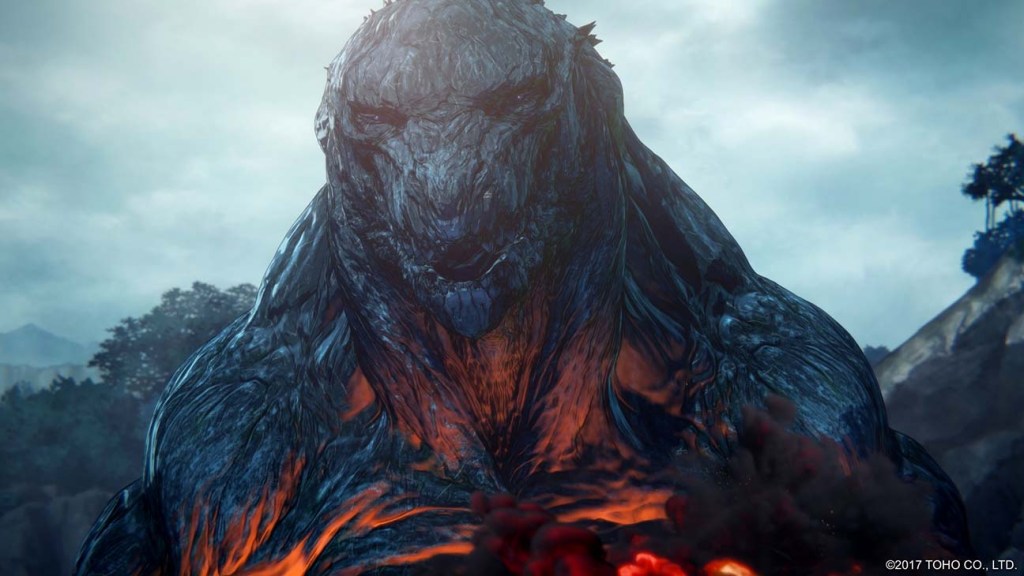 By contrast, Toho’s anime trilogy — comprised of Godzilla: Planet of the Monsters; Godzilla: City on the Edge of Battle; and Godzilla: The Planet-Eater — has a consistently bleak/emo view of humanity as a bunch of obsolete, irresponsible warmongers. The year is 2019; humanity abandoned Earth 20,000 years ago — which they experience as only 20 years after they board the space station Gematron in 1999 and flee for parts unknown — after Godzilla and his pals go on a tear. Many human survivors are fed up with life on the resource-poor Gematron and are now desperate to land on any planet, even a fatally inhospitable one (see Planet of the Monsters‘ shockingly grim pre-credits sequence). Enter hawkish Captain Haruo Sakaki (Mamoru Miyano), an angry young man who grew up on Gematron and is now convinced that the key to saving humanity is killing Godzilla. Sakaki leads an expedition to Earth, where he and a group of soldiers launch an attack on Godzilla’s dorsal fin, the big man’s one weak spot. Sakaki’s logic is initially simple: even if his team cannot defeat Godzilla, they can prove that Godzilla is vulnerable, thereby giving the Gematronians the shot in the arm they need to save themselves (somehow).

But Sakaki’s war-like mentality softens over time as he becomes more familiar with a post-human Earth. Some people have survived: the warpaint-and-loincloth-clad Houtua tribe worship a long-dead deity — who looks a lot like Mothra — and her dormant descendant, a big ol’ egg. But humanity’s most enduring legacy is Mechagodzilla City, a huge military base designed by the artificial intelligence that once controlled Mechagodzilla. Over time, Mechagodzilla’s computer transforms from a robot into an even bigger anti-Godzilla weapon. Now Sakaki has to make a choice: use Mechagodzilla City (and its supply of Godzilla-killing Nanometal) to finish Big G or accept him as the planet’s new guardian. Strangely enough, Sakaki’s choice only becomes really imperative once Godzilla starts to fight with Ghidorah, who, in these movies, symbolizes humanity’s need to dominate rather than adapt to their home planet’s ecosystem.

What’s most remarkable about Toho’s anime trilogy — beyond its unpredictable, bonkers plot — is how committed its creators are to following Sakaki as his understanding of Godzilla changes over time. He gains perspective and is humbled in a way that makes his inevitable sacrifice that much more meaningful, especially when compared with Serizawa’s death in King of the Monsters. These movies may not showcase the Godzilla we know and love, but they are thrilling because of their creators’ dedication to exploring uncharted (and potentially alienating) territory.