In some ways, the 2015 family film Goosebumps was the most pleasant of surprises. It was a case of a major corporation utilizing nostalgia for a specific brand, but somehow figuring out a way to make it charming. Instead of doing a straight adaptation of one of R.L. Stine’s myriad entries in the young-adult series of books, the filmmakers alighted upon making Stine himself a character, and grafting a Jumanji-like narrative of stories coming to life onto the proceedings. Though the film isn’t perfect, it was far better than it needed to be. Catching lightning in a bottle is hard enough once, and doing so twice is next to impossible. So it perhaps isn’t surprising that Goosebumps 2: Haunted Halloween can’t hope to recapture the magic of its predecessor, but it’s awfully easy to pinpoint the problem.

The new film, directed by Ari Sandel, begins and ends with an entirely new set of characters. There’s really only one crossover character from the original, and that’s the movie version of R.L. Stine, played by Jack Black. (More on him in a bit.) The teenage leads of the original are nowhere to be found, and aren’t referenced at any point in the sequel. We’re in a new town in upstate New York, following Sarah Quinn and her younger brother Sonny (Madison Iseman and Jeremy Ray Taylor, respectively). Sonny and his friend Sam (Caleel Harris) one day stumble upon an old house in their neighborhood that includes an unfinished manuscript. When they open up the book, they bring to life that mischievous marionette Slappy (once again voiced by Black), who in turn wants to bring Halloween to life permanently. Only the three kids can stop him and his series of wild monsters.

It’s not like a sequel to Goosebumps was a bad idea — the deftness of the first film suggested that returning to the kid-friendly, but terrifying well of ideas courtesy of the real Stine made perfect sense. But resetting the location and characters is a baffling idea that never pays off. Most anyone watching Goosebumps 2 will understand immediately what’s going on with Slappy, even before we meet him. (When Sam and Sonny enter the abandoned house, they pass the nameplate “STINE” next to the front door without noticing it.) It takes a good half of the 90-minute film for the three leads to understand that a Goosebumps story has come to life; even the Quinns’ neighbor (Ken Jeong) seems more excited than they are once they get a clue. 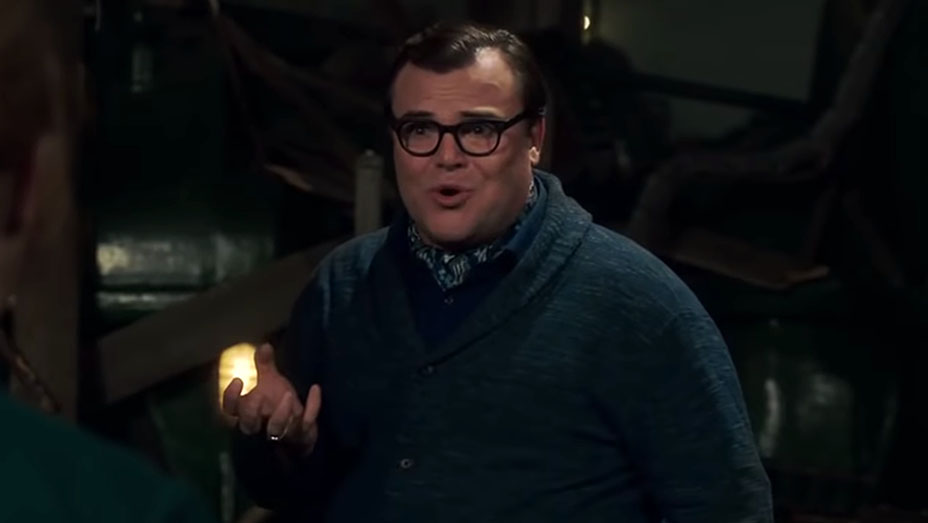 The three kids are charming enough: Taylor once again seems natural and enjoyable as he was in last year’s It, and Iseman does her best selling Sarah’s concern at not being able to nail a great college-application essay. But Sam and Sonny’s dealings with local bullies and Sarah’s frustration with her boyfriend and the college essay all feel like the cinematic equivalent of week-old leftovers. The first Goosebumps was, of course, not intensely original in its storytelling arc, but it had more cleverness in the way it built a romantic relationship between its lead characters, one of whom was straight out of a book without even realizing it.

One of the best parts of the first Goosebumps was the presence of Black as Stine, portrayed as someone who was convinced of his own genius even if the world saw him as a second-tier Stephen King. Though Black still voices the nefarious Slappy, we see him as Stine for maybe five minutes and seems like a complete afterthought. He’s alerted to Slappy’s machinations and arrives in town just as the kids are thwarting the marionette’s plan, suggesting that his only purpose in the film is to fulfill a contractual obligation, or that — possibly more likely — Stine was only written into the story during a reshoot. (Black does get one genuinely good bit, as the author sees a red balloon floating over a sewer and crows that he knew he came up with that idea before King did.)

The real disappointment is that Goosebumps 2: Haunted Halloween, as a whole, feels like an afterthought. Black appearing in a family film with horror-movie stylings isn’t a bad idea, so it’s a good thing he did that in last month’s The House With a Clock in its Walls. That pic is not perfect, but it is wittier and more exciting than Goosebumps 2 could hope to be. (It is mildly funny, admittedly, to see Black and Iseman share screen time here, seeing as Black appeared in last year’s Jumanji: Welcome to the Jungle as the video-game version of Iseman’s high school ditz.) Goosebumps 2: Haunted Halloween feels like the product of a studio that knew it needed a sequel, and grabbed together enough elements to hopefully create a winner. The ingredients for this movie to work are here, but it just feels lifeless because it feels so unconnected to the original.