Leigh Whannell’s new take on The Invisible Man is at once a good film and a lacking reboot, and perhaps the best example to date of how a film can be both these things at once. It’s true, existing IP generally makes it easier to secure funding for remakes and sequels than original ideas because they feel less risky. It’s not unusual to see “adaptations” or “remakes” that are really original concepts with some tweaks and added bits thrown on top to force a connection to an existing property — for instance, the 1992 film The Lawnmower Man, which bears such little resemblance to the short story of the same name by Stephen King that the author actually took the filmmakers to court.

But there are creative merits to reboots and adaptations — or at least, there can be. Building off an existing IP presents the opportunity to expand and have dialogue with what came before, giving a film the opportunity to say something that goes beyond the bounds of its runtime through its connection to existing works. The best reboots can be enjoyed on their own merits, but also reward those familiar with what came before. One of the best examples of such a phenomenon would be the first two film adaptations of The Thing. John Carpenter’s 1982 version takes much from John W. Campbell’s original novella than the 1951 Howard Hawks version The Thing From Another World left on the cutting room floor and then scraps almost everything the earlier film did feature to avoid being repetitive. The result is a novella and two films that can be appreciated individually, but are made all the more fascinating when viewed collectively and put into dialogue.

Whannell’s The Invisible Man is a film where familiarity with the original does not add to the viewing experience but takes away; trying to put the two in dialogue does not generate food for thought. Ironically enough, the 1951 The Thing From Another World, which re-creates the first shot of the original 1933 Invisible Man directed by James Whale in its own opening scene, ultimately pays more due to the film than the new reboot. This is a shame, because though the new Invisible Man tackles important social issues, the central themes of the original remain impressively relevant.

The basic concept of Whannell’s reboot is strong — a psychopathic narcissist invents an invisibility suit in order to terrorize the woman who had the nerve to leave him. But the particular way in which the new film reinvents both the story and the characters of the original also scraps the essence of James Whale’s film.

In the 1930s golden age of Hollywood horror, “mad scientist movie” was a veritable subgenre, and Whale’s The Invisible Man stood apart from the crowd, first and foremost because the mad scientist, Jack Griffin (Claude Rains), wasn’t really a villain so much as a very early anti-hero. Like other mad scientists, his hubristic aspirations toward scientific greatness backfire in spectacular fashion, but his journey is one tied to class commentary in ways that remain relevant considering the proliferation of class warfare films as of late, from the crowd-pleasing Knives Out to the best picture Oscar-winner Parasite. While other mad scientists hole up in their reclusive estates and secret laboratories, Griffin has neither, because he’s poor, a scholarship kid amongst gentleman scientists of leisure. He works through the night because that is the only time he can use his mentor’s laboratories to pursue his own research, and he makes the ultimately fatal mistake of preemptively testing his experimental invisibility serum on himself because he’s driven by a desire to prove his superiority to colleagues who look down on him. Upon realizing his serum works a little too well, he scrambles to set up shop in a village inn to seek an antidote but finds his research efforts repeatedly thwarted by interruptions from the nosy innkeeper and suspicious locals. 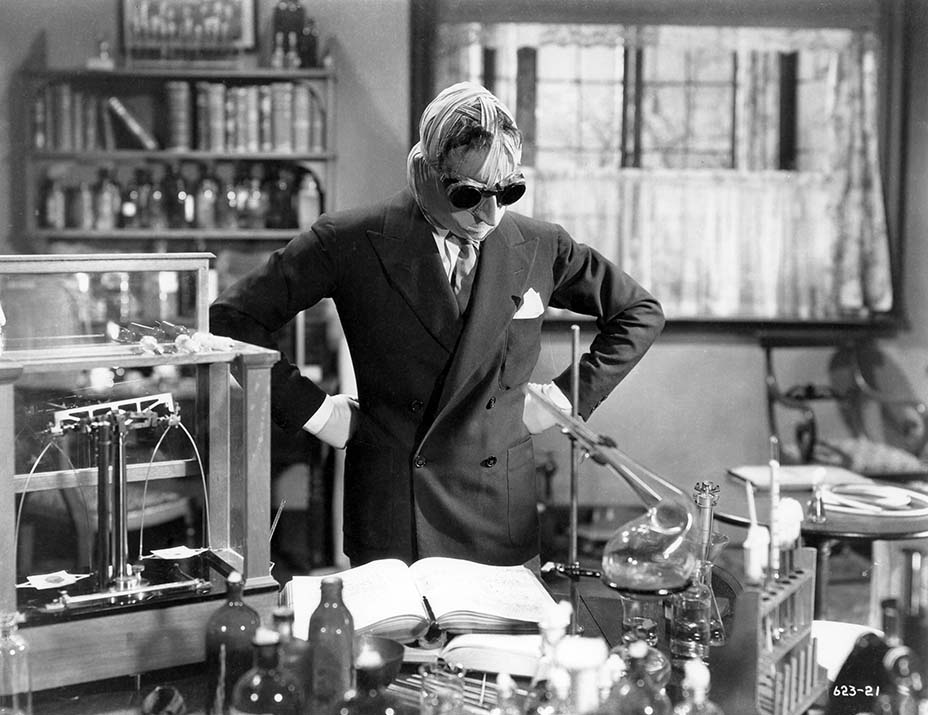 In time, it is revealed that Griffin’s fateful mistake in developing his serum was not knowing that the key ingredient, monocaine, had been proved to cause madness in dogs — a finding only reported in German research journals. Considering Griffin is described elsewhere as a brilliant, well-read scientist, there’s the implication that not receiving the more thorough early education of his more privileged peers made his accident unavoidable. Pride might be his sin, but not growing up with a German tutor is his downfall.

In the end, Griffin repents on his deathbed because the morality-minded standard storytelling practices of the time dictated he had to, but the film doesn’t really mean it. Griffin is more empathetic than most mad scientists, but his status as more of an anti-hero than a traditional villain is most evident through the characterization of his nemesis, Dr. Kemp, a rival scientist working under the same mentor who also happens to be enamored with Griffin’s fiancee, Flora.

Several other mad scientist movies feature characters like Dr. Kemp as heroes, such as the 1935 Werewolf of London and the 1936 The Invisible Ray — beaus on standby ready to sweep the leading lady off her feet once the mad scientist she’s shackled to dies for his sins so the film can end with “and they lived happily ever after.” But Kemp is a far more straightforwardly detestable foe than the Invisible Man. Flora is not pining for Kemp and staying with Griffin out of a sense of duty; she cannot stand Kemp but he does not regard her disinterest as a deterrent. When she interacts with him while trying to track down her missing fiance, he is only interested in making unwanted romantic overtures. When Griffin eventually sends his rival to a fiery death it’s hardly a tragic moment.

The eponymous character of Whannell’s reboot, Adrian Griffin (Oliver Jackson-Cohen), has almost nothing in common with Jack Griffin — motive, personality, strengths, weaknesses — but a great deal in common with Kemp. In his obsessive harassment of ex Cecilia (Elisabeth Moss) and established fame and fortune, the new Invisible Man turns Griffin into his original nemesis, not to make pointed commentary or anything of the like, but as a coincidental by-product of telling a totally different story. The better you know the original film, the harder it is to appreciate the new one because of the fundamental ways in which the two are in total discord.