“It’s good to be back!” Tony Stark (Robert Downey Jr.) says after landing his Iron Man suit in the middle of the Stark Expo stage, surrounded by cheerleaders and pyrotechnics. This opening ceremony for the Stark Expo is an impressive spectacle, featuring celebrity cameos (Olivia Munn, Stan Lee as Larry King, an ode to the past); a video message from Howard Stark (John Slattery) doing his best Walt Disney; and the threat of the future: Stark is secretly dying from exposure to his arc reactor. To suggest there’s a lot going on would be something of an understatement. That sentiment can be applied to all of Iron Man 2 (2010), which takes the theatricality of Stark’s grand entrance to heart with all the zeal of a man chasing his last hurrah. In the sequel, which opened 10 years ago on May 7, 2010, director Jon Favreau doubles down on all the elements introduced in the opening minutes throughout the rest of the film. The result is an overcrowded sequel that feels like an afterparty, a flashy, sequined, champagne-soaked celebration that showcases both the ingenuity of the Marvel Cinematic Universe and its initial growing pains.

With 23 films in the Marvel Cinematic Universe (MCU) and nearly a dozen more in development, it’s strange to think about a time when there were only two, Iron Man (2008) and The Incredible Hulk (2008). That was only a decade ago. Although it’s now difficult not to consider the MCU within the context of it being the biggest franchise in the world, a coalition of filmmakers and stars, and a grand story arc stretching from the Infinity Saga to beyond, the state of the cinematic universe was very different at the time of Iron Man 2’s release. Iron Man (2008) not only launched Marvel Studios, but propelled the careers of Favreau, Downey and producer Kevin Feige to new heights. It’s funny now, in the age of billion-dollar box office expectations, thanks in no small part to The Avengers (2012), to look back at the $585.3 million Iron Man grossed on a $140 million budget. But what’s more fascinating is the fact that The Incredible Hulk only grossed $264.8 million on a $150 million budget. Yes, Marvel Studios had ambitious plans and a stable of comic book characters, but in terms of box office heavy-hitters, all it really had was Iron Man.

Marvel Studios’ mantra at the time couldn’t have been too far off from what Stark says in Avengers: Endgame (2019): “My priority is to bring back what we lost? I hope so, yes. Keep what I found? I have to, at all costs.” Iron Man 2 was always going to be a film made under the pressure of trying to retain the magic of what made the first pic a success for the burgeoning studio.

While Iron Man 2, penned by Justin Theroux, who had helped cement Downey’s second coming as the screenwriter for Tropic Thunder (2008), lacked the narrative focus and urgency of the first film, it delivered on big personalities and a specific rhythm found in the dialogue. That dialogue, which frequently plays fast and loose with word associations, hinges on callbacks and uses double-entendres in such a way that would make Mickey Mouse blush, which not only supported the improvisations of Downey but also those of Don Cheadle’s Rhodey and Sam Rockwell’s Justin Hammer, who is arguably the film’s MVP outside of Downey.

And then there was wild card Mickey Rourke, hot off his best actor Oscar nomination for The Wrestler (2008), who infamously came to Favreau and Theroux with a list of ideas for his character, Anton Vanko, including the bird, and later bristled at studio execs when, to his testament, most of his work ended up on the cutting-room floor. In hindsight, it seems there were simply too many voices and ideas involved in Iron Man 2, all being catered to by a director and screenwriter who wanted to please everyone. Yet this crowded process also allowed for each actor to imbue their character with strong and memorable personalities, to give supporting players the voices of leads, something that would aid the MCU as it continued. Theroux spoke about his experience on Iron Man 2 in 2017, saying that “after the first Iron Man, the expectations for the second one were huge. … We tried to please the fans and tried to make it really big … but sometimes these things, they don’t just quite work. But there are parts of that movie that I’m very proud of.” 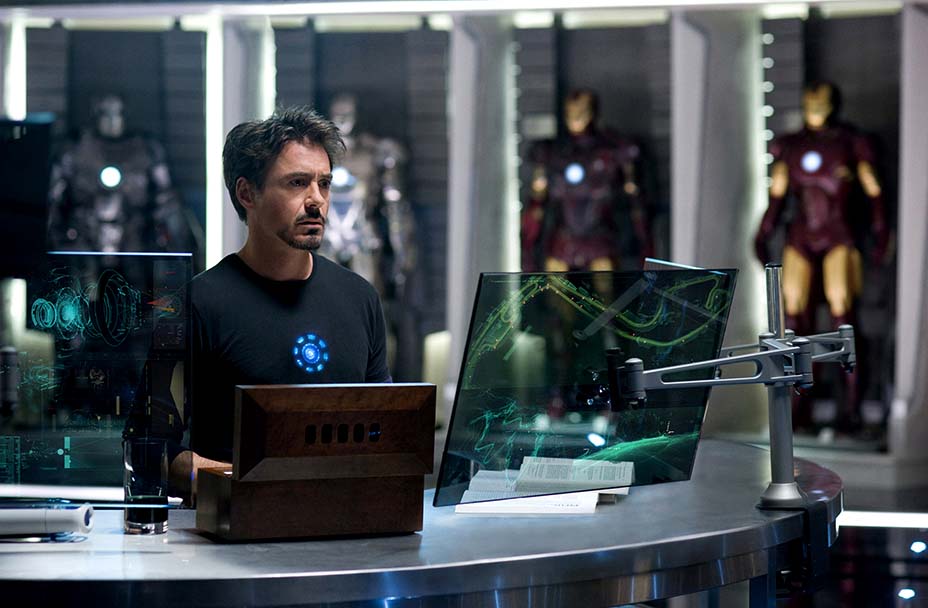 Where Iron Man only had to contend with the brashness of Downey’s Tony Stark and a delightful, scenery-chewing performance by Jeff Bridges as the villain Obadiah Stane, Iron Man 2 was jam-packed with actors who could all steal the scene and one-up each other in a playful competition. Even the supporting players — Favreau, Gwyneth Paltrow, Scarlett Johansson, Garry Shandling and Samuel L. Jackson — were edging in on the spotlight and creating something that felt more like a Monty Python-esque collaboration than a solo film defined by a singular voice. Much of the same elements that made Tropic Thunder so great are present in Iron Man 2, but where getting carried away with situational humor works great for a comedy, it doesn’t always work in service of a film trying to juggle the seriousness of its lead character’s confrontation with mortality, legacy and weapons manufacturing.

But what a juggling act it is, and even with a few balls being dropped and rolling under the table never to be picked up again, Iron Man 2 is never anything less than immensely entertaining. From the aforementioned performances to the action set-pieces like the Grand Pix race and fight, and Iron Man and War Machine’s battle against hordes of Hammer drones in the midst of falling cherry blossoms, beautifully shot by cinematographer Matthew Libatique, there’s a lot to love about Iron Man 2. But much of this love, and the memory of the film’s initially positive reception (73 percent on Rotten Tomatoes and an A CinemaScore), seems to have softened greatly over the years, particularly in light of additional MCU entries. Some of the most common complaints have focused on how we never got an adaptation of the famous “Demon in a Bottle” comic book storyline that saw Tony Stark dealing with his alcoholism, and the notion that too much of Iron Man 2 feels like an advertisement for future movies. Both of these complaints get to the root of the MCU, and how much you’re willing to buy into the inner workings of a cinematic universe.

While some fans were disappointed in the way Tony Stark’s drunken state is played for comedy in Iron Man 2, falling far closer to a Todd Phillips’ Old School (2003) than Leaving Las Vegas (1995), the “Demon in a Bottle” storyline isn’t entirely absent. Iron Man 2 doesn’t entirely follow through with it, but the idea of Stark’s addictive personality is cemented here, only it’s not alcohol he’s addicted to. Tony’s addiction is to being Iron Man, unable to think of himself and the armor as separate entities, which he states as the case at the Senate hearing. His willingness to take wild and unnecessary risks, and resign himself to death without telling Pepper, all speak to a kind of drunken sense of invincibility and self-destruction that comes with his attachment to Iron Man.

Shane Black’s Iron Man 3 (2013) and the Russo Brothers’ Captain America: Civil War (2016) both took this idea of Stark’s addiction to his own technology further, essentially making his suit of armor a bottle for Stark to pour his insecurities into. Iron Man 2 works better in context with later films, which may be something of a cheat, especially considering that at the time of its release, most superhero sequels, such as X2 (2003), Spider-Man 2 (2004) and The Dark Knight (2008), were largely self-contained. But it is the very thing that the MCU, and subsequent cinematic universes, aimed to sell us on, the idea that none of these stories exist in a vacuum, and planned or not, flaws had a means to later become advantages.

Along those lines, there’s the existence of all of the Avengers references in Iron Man 2. From Nick Fury, SHIELD, Black Widow, references to Thor and footage from The Incredible Hulk to Captain America’s shield and a map of global hotspots including Wakanda, Iron Man 2 is chock full of teasers, or advertisements if you prefer, for future movies. Notably, Marvel has gotten better at including these references, or at least saving them for post- or mid-credits scenes, with nothing so seemingly egregious as two characters referencing the work they had to do in New Mexico in order to set up Thor (2011).

But even then, these methods of referencing other storylines and characters popping up and disappearing weren’t unfamiliar to comic book readers. There’s always going to be the argument that films are not comic books and can’t work the same way, but for Marvel Studios they have. No, references to Thor, Captain America of Howard Stark being a founding member of SHIELD were not necessary for Iron Man 2’s narrative, but even if ancillary elements like Nick Fury’s presence and the introduction of Black Widow could have been handled better, those characters were key parts of Iron Man’s publication history and aren’t entirely out of left field.

It’s easy to forget, especially today, that Marvel Studios sprinted to The Avengers with five films in four years. So while the obvious answer now to the overcrowding issues of Iron Man 2 is to suggest that Nick Fury and Black Widow solo movies should have been part of Phase 1, those weren’t financially viable options. Marvel Studios had to bet the future of The Avengers, and its cinematic universe, on the character who would draw the biggest audience, Iron Man.

Iron Man 2 had to carry the weight of a cinematic universe, and not only serve as a sequel to a critically acclaimed hit, but also work in the building blocks that would entice audiences for what was coming down the pipeline, the first Marvel Studios event film that would be the means to measure the success of the MCU. Iron Man 2 is messy, often endearingly so, and it’s far from being the best film in the MCU, yet it was an essential piece in making the MCU the titan it is today, and shifting perceptions on what a sequel within the confines of a cinematic universe meant, for better and for worse. Ten years later and it’s become all too easy to loosen the screws on Iron Man 2, but when it comes to looking at the 20 films that followed, Favreau’s sequel, as both a learning lesson and success story, may be the essential component, that missing element in the arc reactor, that powers this whole mighty Marvel machine.

What If Robert Downey Jr. Were Never Iron Man?