In the absurd, low-budget WTF-is-that-film-called world of low-budget horror where Sharknado recently ruled the seas, one ludicrous title made the most noise this year. The VelociPastor, an unlikely story of a grief-stricken priest who, given the power to transform into a dinosaur when angry, teams with a local prostitute to fight crime, became a viral smash when its sales agent and U.S. distributor Wild Eye Releasing dropped a poster (“The Man of the Claw,” it screamed) and trailer in late April.

From there began, in the words of writer-director Brendan Steere — whose idea for the film began with a comical autocorrect on his phone — “a fucking crazy whirlwind” that caught all off guard.

Within weeks, Steere had to turn off his Twitter notices because of the onslaught of interest, was interviewed by Forbes and — perhaps most bizarrely — saw his creation, made for about $35,000 (a budget the movie wears very much on its torn, ketchup-splattered sleeve), become a Spanish political meme when a right-wing priest campaigning in the presidential elections was compared to the titular character.

Around the time of The VelociPastor’s internet eruption, Avengers: Endgame was being released, and the two often were mentioned in the same sentence, Steere claims. “Which was very flattering, but the only thing I kept thinking was that their opening logo must be 10 times our budget,” he says, adding that, by his calculations, VelociPastor could have been made 5,400 times for the cost of Marvel’s superhero epic.

But for all this buzz, just how many filmmakers and producers working in this high- (or low-, depending on how you look at it) end world of killer clowns and demonic living-room furniture (more on that later) can lay claim to financial success? Does having a crazy concept and head-turning title necessarily lead to riches? Most who deal in such content would admit, not quite.

According to Wild Eye CEO Rob Hauschild, it’s still “way too early” to assess the figures for VelociPastor, which was released digitally and on home entertainment in late August and had not yet hit the SVOD platforms where people often wait to “really dig into these films that are on their watchlist.” 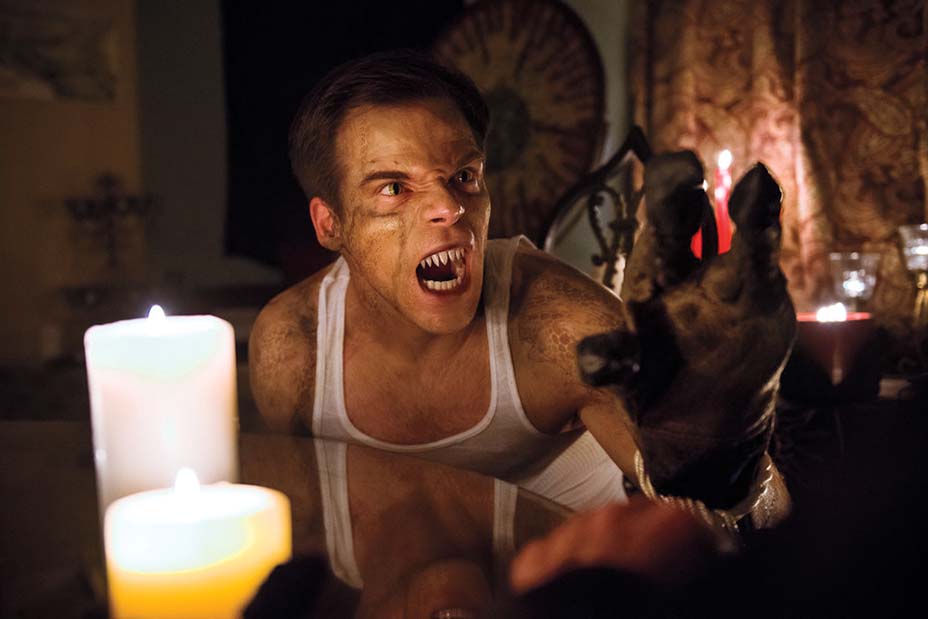 That said, the enduring interest in the horror genre — even at the very low end — does often lead to a “higher bump in the returns,” he says, and gives it “breakthrough potential.”

However, a breakthrough film in this tier of the industry isn’t exactly Marvel territory. And it isn’t quite Sharknado, which was made for $1 million, came backed by Syfy and became a cameo-strewn franchise.

“If something on this level made $100,000, that would be considered a big hit,” says Hauschild. “[That] would be considered a failure anywhere else in this business, which is the beauty of what we do. Some of these producers are making films for $10,000, so if they get a check for $15,000, they’ve already won the game and are onto the next film.”

In 2017, High Octane Pictures had a “hit” with the low-budget horror Clowntergeist, in which a college student with a crippling fear of clowns comes face to face with the evil spirit of, you guessed it, a clown. Like VelociPastor, the mash-up name sparked a media frenzy, according to High Octane president Galen Christy, receiving coverage in such mainstream outlets as The Guardian and Entertainment Weekly (the phenomenon was so significant, the film also landed on The Drudge Report).

“We hit six figures with that one, which was nice,” says Christy, adding that the reboot of Stephen King’s It — released around the same time — might have helped. This year, High Octane has perhaps set the lunacy bar higher with the furniture-based horror Killer Sofa — the title is a bit of a misnomer since the film is really about a homicidal easy chair — released in time for Halloween (and being shopped internationally at AFM with Devilworks).

No stranger to this world either, Uncork’d Entertainment in 2014 unleashed Beaster Day (giant man-eating Easter bunny wreaks havoc on small town). To aid the super low budget comedy horror, CEO Keith Leopard says the company created some “really crazy high concept art,” putting a rabbit on the poster “that clearly wasn’t even in the movie” in order to attract the “WTF coverage.”

Leopard admits such films are “never going to make a ton of money” but can often do well on ad-based subscription services, where people whose interests are piqued — but not significantly enough to actually pay for the movie — can give it a try. “And then they can watch 10 to 15 minutes and go, ‘Oh, this really is shitty,’ and then they turn it off.”

But even such quick bailouts add to a film’s bottom line. On ad-based services, money is made based on how many commercials viewers watch (so it’s essential they stick around long enough to hit the first ad break), while on Amazon, it’s paid by the hour, with total minutes aggregated. And having a title that causes a stir — complete with splashy artwork that momentarily masks the low-budget nature — certainly helps.

“If a movie could do 20,000 or 30,000 hours in a month, you’re talking anywhere from $18,000 to $30,000 in returns,” says Hauschild, whose Wild Eye this year also released a title that mashed up the Sharknado craze with the enduring horror appeal of killer clowns — the appropriately titled Clownado.

And for all the viral success, even if this isn’t converted into cold, hard cash, having such a recognizable title in a company catalog serves as a solid calling card. Like Sharknado for Asylum, Hauschild says his company will likely be known as “the guys who did VelociPastor, so check out these other great films of ours.”

As for Steere, he admits VelociPastor will probably ensure that whatever he does next will get “at the very least” a little bit of press: “Those wacky VelociPastor dudes are back with another round!”

For those hoping for a sequel, however, he says his next project will likely be an idea “actually very serious and heartfelt,” tonally similar to “something by Lars von Trier.” And without dinosaurs.

5 AFM Horror Flicks To Not Miss

This comes billed as “Friday the 13th meets Bridesmaids,” but presumably without Melissa McCarthy defecating in a sink. When a group of friends head to a summer camp closed in the ’80s to celebrate a marriage, guests begin disappearing, and it’s up to the bride to solve the dark secrets and save her wedding. Features an evil, possessed teddy bear. 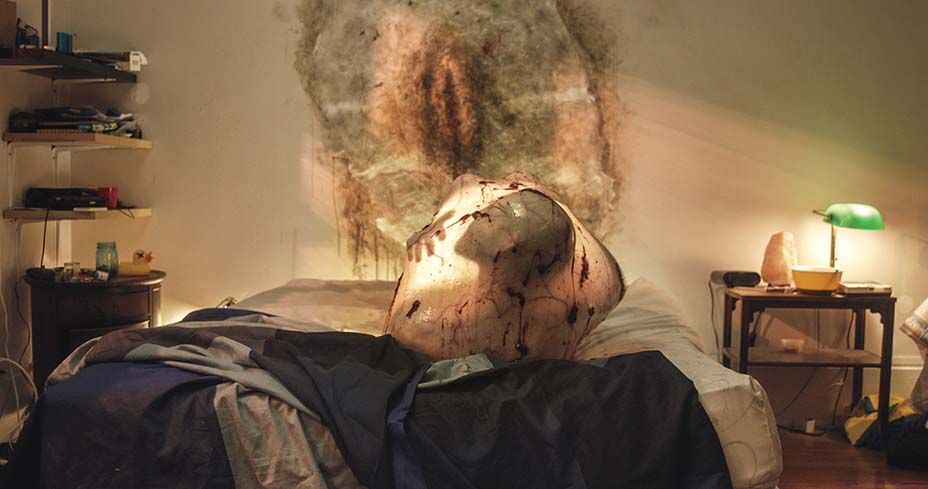 Ignore the name; this isn’t quite a goofy comedy. Instead,the Fantasia Festival-bowing horror drama is a bold and clever feature where the “Dicks” refer to the main character. When Becca receives a call from her suicidal brother, Richie, she races to his apartment only to find it full of corpses that look just like him. 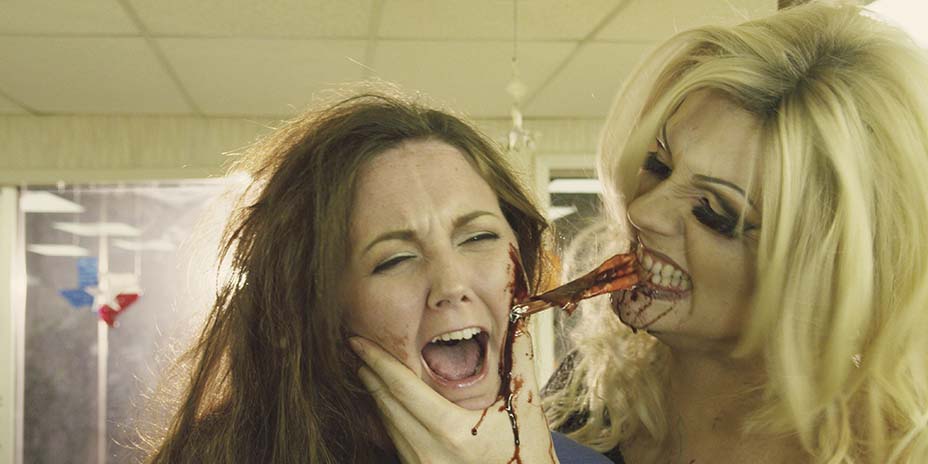 Also known as the slightly less eye-catching (but more alliterative) Dead Don’t Die in Dallas, this zombie apocalypse spoof sees a miracle pill supposedly set to cure all diseases leaving just homosexuals and “bible thumpers” left to fend off the undead in a small Texas town.

My Uncle John Is A Zombie

With a title that doesn’t leave too much to the imagination, this horror comedy actually comes from genre hero John A. Russo (screenwriter on the 1968 classic Night of the Living Dead). A zombie, funnily enough an uncle called John, suddenly becomes famous when the world discovers he can talk and reason as if he were alive. One review suggested that if Citizen Kane and Shaun of the Dead were to have a child, this would be it.

This is the fifth film in the low-budget Robert horror franchise, which is loosely based on an allegedly haunted doll at Florida’s East Martello Museum. This time, the setting is Soviet Russia in 1951 and sees the killer doll battle Joseph Stalin’s henchmen on a plane.

This story first appeared in The Hollywood Reporter’s Nov. 8 daily issue at the American Film Market.