[This story contains spoilers for episode six of The Mandalorian.]

The adventures of a single dad looking for a job continue in this week’s episode of The Mandalorian. I’m only slightly kidding here. The episodic structure of the series has focused primarily on Mando (Pedro Pascal) seeking job after job in order to pay his way across the galaxy in his efforts to protect Baby Yoda. And over the course of these episodes, Mando has softened considerably from the bounty hunter we met in the first episode. Episode six, “The Prisoner,” directed by Rick Famuyiwa, who also directed episode two, sees Mando meet up with an old mercenary friend, Ran (Mark Boone Junior) who hires him for a simple prison break job alongside a motley crew of scoundrels including ex-Imperial sharpshooter Mayfield (Bill Burr), Twi’lek mercenary Xi’an (Natalia Tena), droid Zero (Richard Ayoade) and a monstrous Devaronian Burg (Clancy Brown). But the job encounters unforeseen complications and Mando’s reluctant new allies quickly become enemies.

From the onset, this episode is reminiscent of The Clone Wars episode, “Bounty” (season four, episode 20), in which Asajj Ventress is forced to reassess her morality alongside a group of bounty hunters, including the young Boba Fett, who are planning a train heist. But where that episode offered a sense of closure for Ventress, this action-heavy episode of The Mandalorian feels like it’s opening a new door, despite being light on mythology, and even lighter on Baby Yoda. Instead, the episode serves to highlight Mando’s skill set and cunning, as well as to muddy the specifics of his moral code a bit. Given the title and the fact that the prisoner that Mando and crew are tasked with breaking out of New Republic prison isn’t named for the first half of the episode, there’s an expectation that it will be a familiar face, or at least a major player in the story going forward. But that isn’t the case. The prisoner is simply Xi’an’s brother, Qin (Ismael Cruz Cordova) who had a bit of bad blood with the Mandalorian from a past job gone South. Ran’s crew betrays Mando, which seemed inevitable, and locks him in Qin’s prison cell while they look for an escape route as the clock ticks down on steadily approaching New Republic forces. Mando manages to escape his cell and traps the crew within the maze of the prison, stalking them down one by one and striking fear into their hearts like some kind of galactic Batman. It’s badass for sure, but the aftermath dilutes some of those actions. 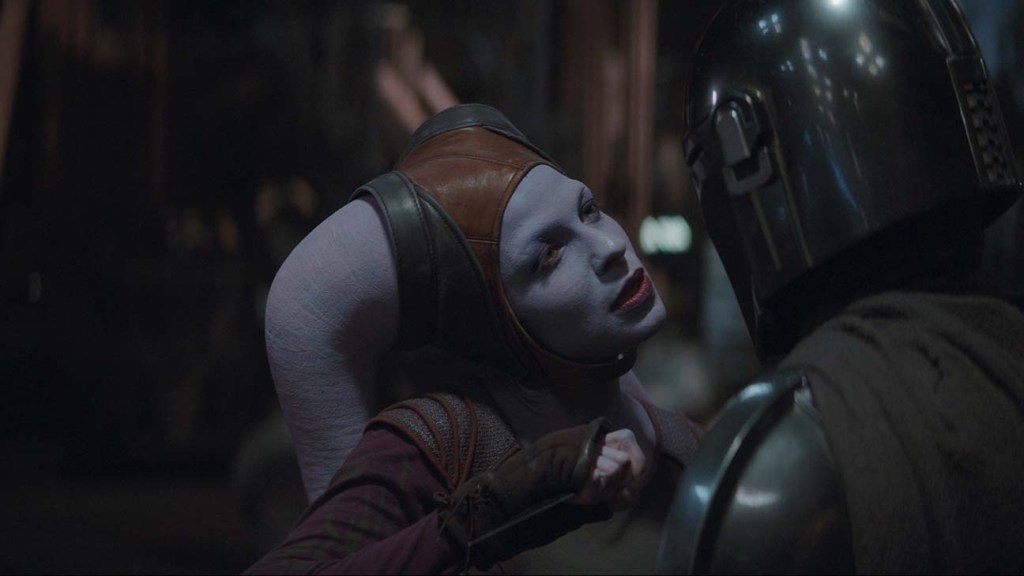 The way in which Mando hunts down the crew leads us to believe he’s killing them. He’s already proved to be a killer, not only if it presents him opportunity to escape, but also if it comes to double crossers, like Toro Calican in the previous episode. Yet, as revealed in the episode’s ending, Mando didn’t kill Ran’s crew as we were led to believe, and instead confined them all to a prison cell. There’s seemingly no good reason why he spared them. And he doesn’t offer the same pass to Ran and Qin, who were both in on his betrayal, when he sends the New Republic X-Wings to bomb their station. In terms of what we know of the character thus far, it makes little sense for Mando to have spared Ran’s crew, even if Baby Yoda has softened his temperament. The fact that they live seems at this point to be a flaw in the writing, but also a setup for a larger story. Call it an uneasy balance between the light side and the dark of the show’s arc for its central character.

The Mandalorian has left a trail of bodies behind him through these six episodes, but more important, he’s left a trail of enemies. The Imperial forces, the Bounty Hunter’s Guild, Fennec Shand (Ming-Na Wen), and Ran’s crew. Undoubtedly, all of these forces are going to come together in their efforts to bring down the Mandalorian and capture Baby Yoda. And let’s not forget that there’s the mysterious stranger who saved Shand at the end of the last episode. My colleague Ryan Parker supposed that stranger was Boba Fett, and it makes sense. Not only because of the location and the spurs on his boots, but also because who better to organize all of the disparate forces against the Mandalorian? And who better to give the real Mandalorian a literal run for his money than the false one, the clone, who wears the armor and carries the weapons but does not follow “the way.”

If we’re looking at the long game for this season, and into the next, it would appear that The Mandalorian is setting up for a showdown, a battle between the mercs and bounty hunters on various sides. If Fett does end up leading the charge, Mando won’t be fighting alone. Not only does he have the remnants of his people, refugees of Mandalore, he also has an ally in Cara Dune (Gina Carano). So far the series hasn’t done much to tie these characters or episodic events together, but it feels as though something is brewing. This may not be a galactic struggle to determine the fate of the galaxy and the balance of the force, but this is still Star Wars and mark my words, a war is coming.

'The Mandalorian' and Luke Skywalker's Fade Into Obscurity