“Men my age dictate this war — why should we be allowed to send our children to fight it?” says Mark Rylance in Dunkirk, Christopher Nolan’s World War II movie recounting the British military evacuation of the titular French city in 1940. Alongside seasoned stars like Rylance, Tom Hardy, Cillian Murphy and Kenneth Branagh are newcomer Fionn Whitehead and One Direction’s Harry Styles, actors who are making their feature debuts and might draw younger viewers — or those who are most likely to enlist.

“It’s good for young people to see a truthful war film like this,” reflects the Oscar winner. “There are horrible deaths in the film, horrible deaths, but they’re not all bloody and gory, and therefore it’s got a PG-13 rating, which means that the young boys who, if they were like me, are always fascinated by war can come and see just how awful and chaotic any war is. And if, God forbid, they come to a time when they’re going to be drafted or something like that, they’ll be a little more informed about what might be asked of them.”

'Dunkirk': What the Critics Are Saying

Ahead of Warner Bros.’ release of Dunkirk on Friday, Rylance tells The Hollywood Reporter about the movie’s sparse dialogue, fresh faces and Imax moments — and why a German is never seen onscreen.

You play a civilian who boats into the war zone with Barry Keoghan and Tom Glynn-Carney. How would you describe your character’s role in the story?

My story is a distillation of the story of thousands of men who went over with their brothers or sons — some women as well — on their pleasure boats to take part in the rescue and return the soldiers stuck on the beach. The journey takes about a day in our lives, but you probably only get about 30 minutes of snapshots of [our] events happening in that day. It’s an example of civilian bravery in a violent situation. I was surprised — I knew it would be thrilling, and it is, but I found it very emotionally moving as well. Just that nature of people helping each other and working together moves me. I would hope that people take encouragement in that, that no matter how inconsequential or powerless they may feel — and we can feel it so easily these days as a normal civilian — that, actually, small actions make a big difference. And in this case, because a lot of them did something for society, not just for themselves, and risked their lives for the larger group, the situation came out much better than it would have if they hadn’t.

There’s such worship of the individual now in both England and America, but when terrible things do happen — as have been happening in England, unfortunately, over the last few months — we’ve seen extraordinary, extraordinary bravery not only from civilians, but from the firemen and ambulance men and policemen. The tyrants of the world like to convince other people that there’s no point to even voting or struggling at all, that there’s nothing you can do about it. But actually, you can. 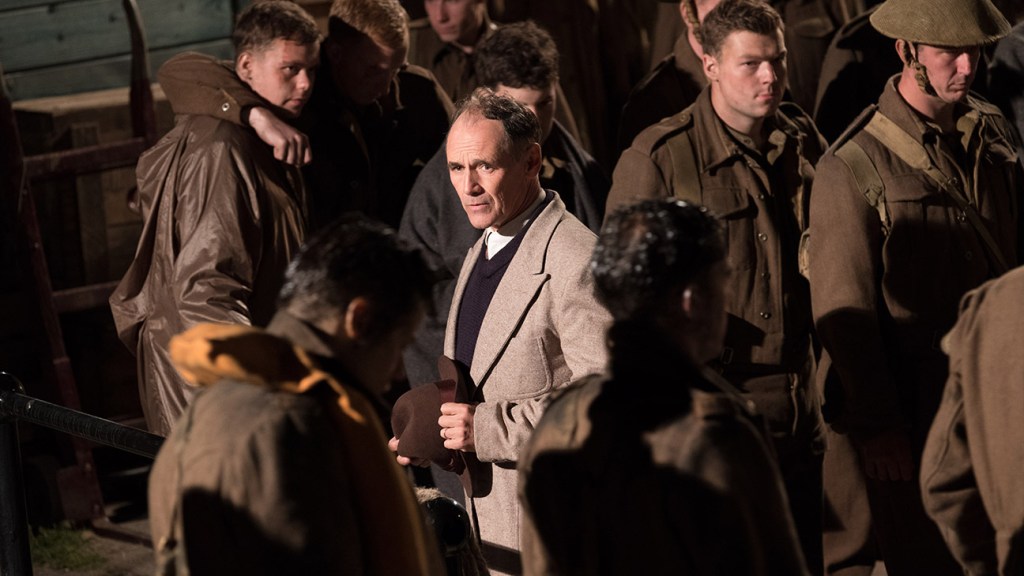 What did you think of Nolan’s decision not to include much dialogue?

It just seems true. It didn’t ever feel like people were being more quiet than they would in nature. English people, certainly, were very much more reserved and had an idea at that time in society that to express your emotions to another person was an imposition on them, that you were imposing on their thoughts and their mood by telling them your problems. I don’t know if that was a very healthy idea. (Laughs.) But certainly, my father was about age 6 when this took place, and he had that idea. He is a very private man with his emotions.

Well, I applaud that and, in fact, we had a conversation when he first approached me about whether the Germans should ever be referred to. He took out any reference to the Germans and just called them “the enemy,” which I thought was really good in that it’s not a history lesson. And even when you think about it, the Second World War was not a war between the German people and the English people. It was a war against the idea of fascism, the idea that one man, a dictator in this case, or one race of being, the Aryan race, is better than another individual or race of people. And the English had taken advantage of that idea just as much as the Germans in our treatment of African slaves, which was just as cruel and vicious. So the fact that he calls them just “the enemy” and you never see their faces, I felt this respect towards the German people, who I think are rightly a little tired of being banged on about the Second World War.

There is certainly still, in England, a nasty nationalism whenever the Germans come and beat us in football, which they always do! (Laughs.) And there are horrible jokes about the Germans being Nazis. They’re not Nazis; they’re a most wonderfully inspiring people with a wonderful culture. They just, after the First World War, fell foul of this horrible Nazi idea. So I like the way that [Nolan] made it more about an essential situation of people trapped and surrounded by an enemy.

Oscars: Can 'Dunkirk' Go Where No Christopher Nolan Movie Has Gone Before?

What was the toughest scene to shoot?

Chris calls it an intimate epic. Everything has to happen for real in front of the camera when you’re in a Chris Nolan film, because he doesn’t like to add anything with [too much] computer-generated images. I think the scene where there are a lot of men in the water, a boat is sinking and an airplane crashes — that technically took a long time to set up and was a very, very complicated thing to coordinate in the air and the water as well.

You first saw Dunkirk at the London premiere. Any favorite Imax moments?

It was wonderful to see the three Spitfires fly across the huge screen. But it was also great to see the close-ups of the young soldiers’ faces very largely [since] they’re often in enclosed spaces and boats and things like that. It really was very convincing that that’s the kind of cinema I like if I’m going to go out to a cinema. A type of big experience, not to go into just a room that’s only a little bit larger than your television! (Laughs.) 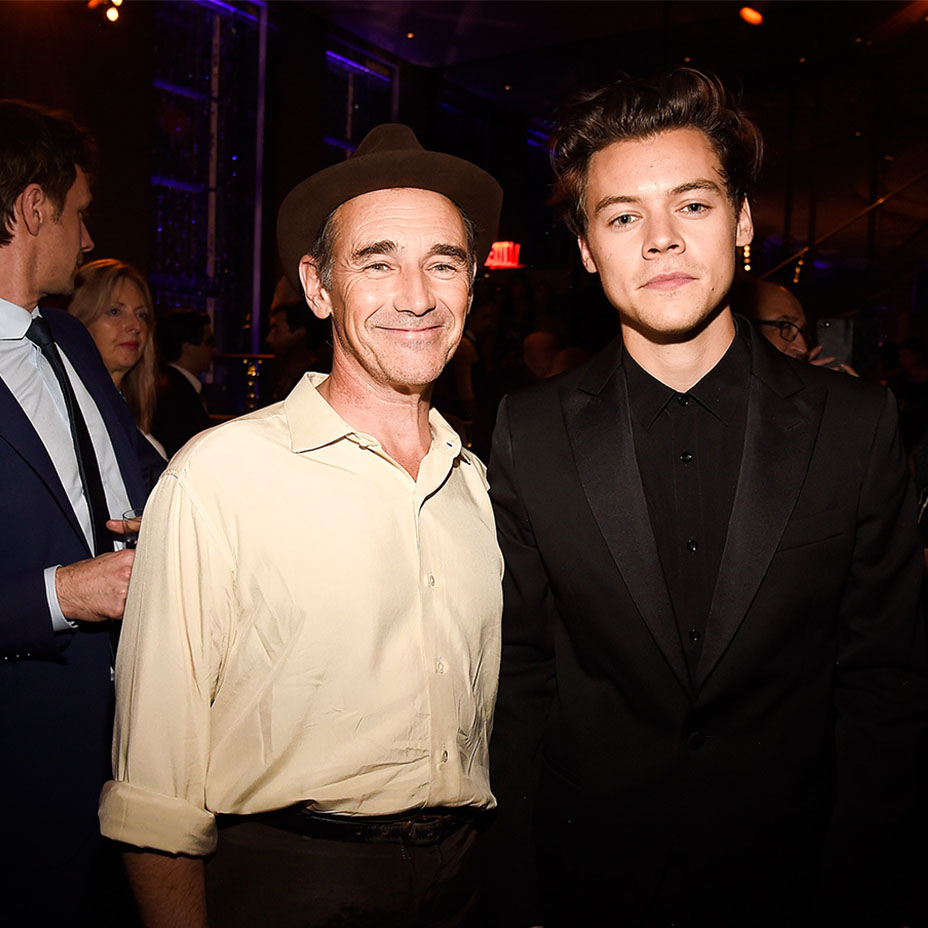 What’s your take on the movie’s young actors?

Particularly the boys on the beach — Harry and Fionn — were being pushed very, very hard. I wanted to encourage Harry that he entered the film business in essentially the deep end. (Laughs.) Most acting roles are not so difficult and uncomfortable as that must have been, sitting around wet on the beaches in the cold. I don’t know if he’s going to carry on acting! (Laughs.)

It was the first film where I was the eldest member of the cast, to my surprise. I guess, because of the internet, young actors are so much more conscious of a wide range of international filmmakers from Korea, Spain and all over the place. They have much more taste than I remember having at their age. The ones on this film were much more keen to be involved in good films with very artistic directors than just to be famous or make a lot of money or anything like that. Their enthusiasm for quality was very encouraging. I hope [Dunkirk] is like The Deer Hunter — so many people were introduced to us, in terms of film, like Christopher Walken and Meryl Streep. Here, you’ve got a number of actors making their first film ever. I hope it’ll become a collector’s item in that way.

Has shooting Dunkirk changed your opinion on pleasure boating?

I do enjoy it! I don’t have a boat — I live in London, so I’m not very near the ocean, unfortunately — so I’m not very experienced, but I still would be happy to go on a boat. (Laughs.) Now, I’m not so frightened about it.

Shopping: The Best Retro Sneakers for Stepping into Fall with Style