Speak the name “Rambo,” and a few choice images pop into your mind, each related by blood and by excess: Men’s throats torn out barehanded, companies of soldiers reduced to carmine mist courtesy of an M2 Browning machine gun, tanks driven into helicopters, gunboats blown sky high by a well-placed RPG shot. You think first of brawn. You think of badassery. You don’t, most likely, think of bitterness, or bleakness, or the unknowable and crippling sense of isolation too many soldiers experience on returning to civilian life after serving in combat. That’s partly on you. It’s also partly on, well, the Rambo movies that aren’t 1982’s Rambo: First Blood.

Thirty six years have passed since the cardinal chapter in the Rambo franchise opened in theaters, since Sylvester Stallone first introduced the movie version of David Morrell’s haunted Vietnam War vet to audiences across the world, since “John Rambo” became synonymous with “muscle-headed, braindead action.” Charting the course the series took after First Blood, and ignoring First Blood pretty much across the board, the relationship between Rambo’s name and violent rah-rah machismo makes sense; with a bit of credit given to Rambo: First Blood Part II, which at least tries to acknowledge the character’s painful backstory, everything after First Blood devolves from character study and antiwar critique to a nonstop montage of explosions, gunfire, dudes getting arrowed, more explosions and manly grunting, all buttressed by guts and arterial spray.

A shame, that. The good news, at least, is that Lionsgate’s 4K Ultra HD release for First Blood, which hit this week, gives viewers opportunity to revisit the movie 10 years after the franchise’s last update, Rambo, and just over a year ahead of its next, Rambo V: Last Blood, dropping in September of 2019. There’s violence here, too, and of course, there’s a bit of viscera, but more than anything else there’s heartache and anger, two things mostly absent from the films that followed in its wake.

Not that there isn’t a certain pleasure in watching Stallone fully embrace Rambo as an unstoppable killing machine capable of leveling armies all by himself, of course; Rambo isn’t exactly a smart film, but it’s certainly an entertaining film, assuming you like your action over the top and completely apathetic about optics. 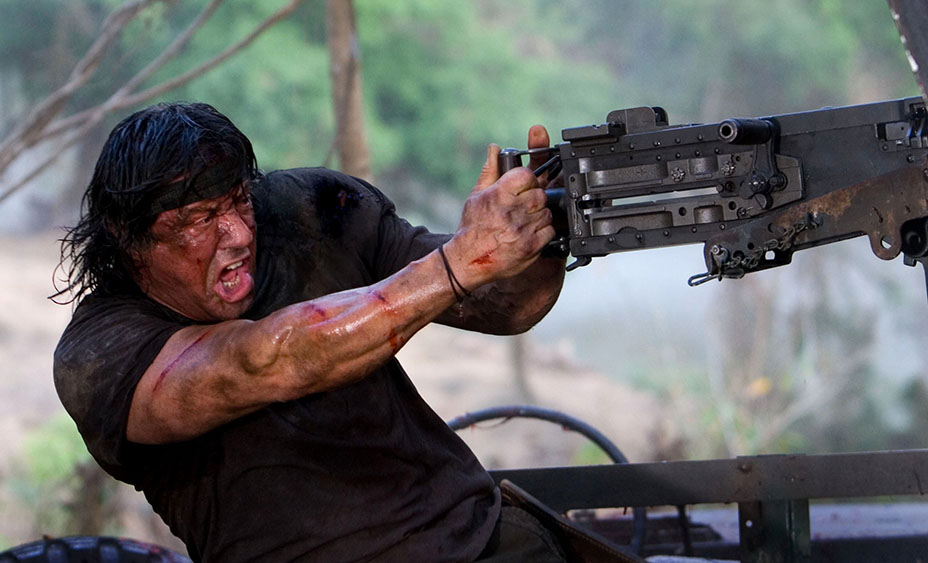 First Blood, in comparison to 1985’s Rambo: First Blood Part II, 1988’s Rambo III, and 2008’s Rambo (and, at least according to early images of Stallone dressed for the dude ranch, Rambo V: Last Blood), looks like an Oscar movie, a story built on the foundation of genre but concerned with ideas and themes that marry well to its genre of choice.

Yes, Ted Kotcheff’s film lets Rambo go, well, Rambo, sneaking about through the woods of Washington state, dispatching hapless lawmen hot on his trail; yes, he sets up traps that even the Predator would gaze on in admiration; yes, he’s a one-man wrecking crew trained to take out enemies beyond count and improvise supplies with scraps and detritus found in the belly of a mineshaft. But even with Rambo at his most superpowered, Kotcheff — working from Morrell’s blueprint and from the screenplay cobbled together by William Sackheim, Michael Kozolland Stallone himself — ensures that he remains at all times simply, and dolefully, human.

Rambo doesn’t want to fight. He doesn’t want trouble. Maybe, if you read the franchise closely enough, that concept carries through even to Rambo ’08’s absolutely bonkers climax, but First Blood never forces its audience to parse out the message because the message is the soul of the movie. Rambo’s wandering the United States seven years after being discharged from the army, searching for one of his buddies, a member of his old unit; his travels take him to the Evergreen State, where he’s told that his friend died of cancer via Agent Orange exposure in Nam. Once a part of a collective, Rambo, mere minutes into First Blood, finds himself utterly alone, which makes his treatment at the hands of Sheriff Teasle (Brian Dennehy) all the more appalling. Teasle mistakes Rambo for a drifter and literally drives him out of town. All Rambo wants is a bite to eat, maybe a place to rest. After putting his life on the line for the country, even in a war as corrupt as Vietnam, food and shelter seems little to ask.

But this is the United States, a land of performative patriotism, where we love our troops when they’re at war and willfully neglect them when they come back home in one piece. Teasle’s a tough guy. He’s not about to be out-toughed by a shaggy-haired vagrant, no matter that he’s a decorated war hero. It’s bad enough to wake up one morning to find that you’re the last of your former military unit, and worse still to return from Vietnam only for hippies and activists to spit on you and call you baby killer. But the greatest ignominy of all may be finding that even the law of your land doesn’t care about you, and in fact considers you a stain on the country you fought for. First Blood isn’t about a beefy rebel kicking indiscriminate ass. It’s about a man bereft of everything, right down to his dignity, by the government he trained to serve. Ultimately, it’s a tragedy first and a spectacle second.

And the film demands more respect for it. For prestige and respectability, Stallone has chapter in the Rocky franchise, being, of course, Rocky, Rocky Balboa and Creed (and, perhaps, Creed II, which opens just before Thanksgiving). But First Blood demands the same respectability for its defiance of convention and the strength of its conviction. It’s a protest film that packages its dissent within the comfortably straightforward structure of its genre.