The follow-up (a prequel) to 2010’s Red Dead Redemption, centers on outlaw Arthur Morgan, a leading member of the notorious van der Linde gang in the last dying days of America’s Wild West. Featuring a sweeping open world, incredible immersive gameplay and an attention to detail unlike anything else in gaming, Rockstar’s return to the Old West is a masterpiece of design, craft and storytelling.

Heat Vision‘s Ryan Parker and Patrick Shanley were granted advanced copies of the new game, and both offer their thoughts on the opus below.

Ryan Parker: I already love this game so much, and I feel like I have not even scratched the surface. I am about 22 percent into the story — and barely opened up the map, most of it is still blank.

Patrick Shanley: I’m a little bit farther along than you, but am still in awe of the size of this game. There is an almost overwhelming amount of activities to engage in here, and the variety of them is absolutely astounding. So often in open world games in the past I find myself repeating the same mission over and over. Here, there is less of a sense of action being of a premium. Some of my favorite missions and quests have simply involved going down to a nearby fishing hole or tracking game with my cohorts.

Parker: The details are hypnotizing. From watching the snow and rainfall to mud getting on the character’s clothes, it is just amazing how this world works and reacts to itself. I watched a pack of wolves hunting a deer and was just mesmerized because it was so unexpected… and I wanted to see how it played out. And the fact that every building and every character you come across is interactive is just terrific. The world feels alive. 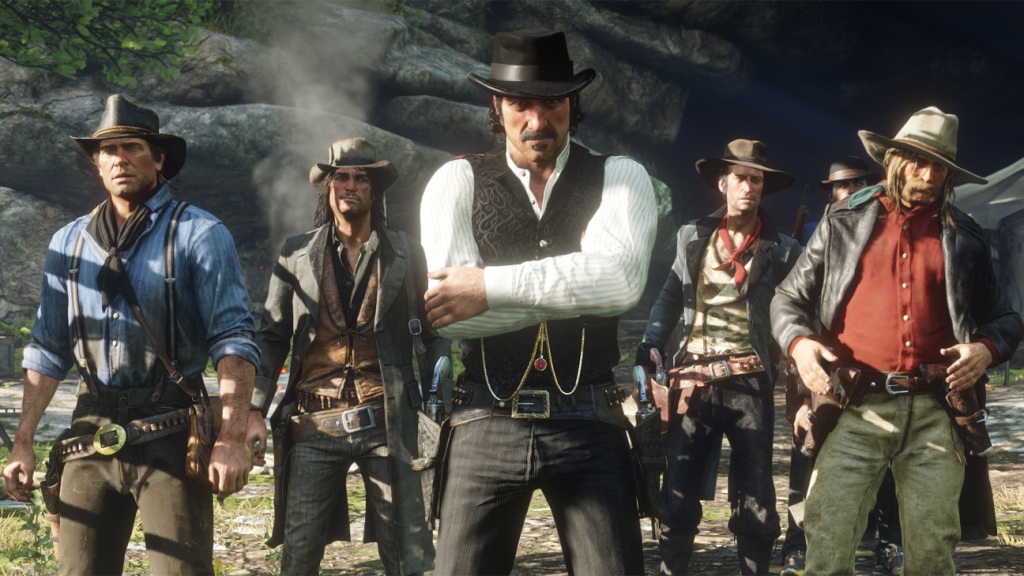 Shanley: What gets me is that not only is the world full of buildings I can enter whenever I feel like it but that they are inhabited by what feels like actual human beings. I have had a great time just overhearing conversations that spin into side-quests or peering into windows to discover some nefarious underground business practices. Every open world game is pitched as a “living, breathing world” but up until Red Dead Redemption 2, I don’t think that promise has ever been delivered on. Everything in this game interacts with everything else. I mean, I’ve gotten into fist fights with townsfolk just because I accidentally walked into them!

Parker: Yes, that is so right on. And I am so into how you are given a hard time by townspeople if you were a jerk last time you were around. They remember your face, your misdeeds. It is kind of creepy — but in an awesome way!

Shanley: One major thing that sticks out to me about this game, particularly when compared to other video games, is just how slow-paced it can be. It really does take its time, and I am amazed by how well that works. Fast travel options in Red Dead Redemption 2 are not like in other open-world games. You actually have to hoof it to a train station, and often I found myself opting to just gallop my way there on my own. Doing that opened up a myriad of possibilities and, just like that, I’d find myself in the middle of the wilderness helping a photographer take pictures of local wildlife some two hours later.

Parker: It is funny because this game makes me want to be more responsible in that world. Even when I am out and about, putzing around town or in the woods, I feel this calling to get back to my gang’s camp and make sure everyone is OK. (Did I contribute enough cash to the gang’s fund? Did I do enough chores before I left? Should I have chopped more wood? Do we have enough to eat for a few days?) And, do not even get me started on my horse. It is wild how you bond with your horse in this game. I already lost one horse early on. I wasn’t even all that attached, but still, it was hard to start from scratch with another animal. But if anything ever happened to Plugger (my current Mustang randomly found in the wild), I would be devastated. Put a lot of time in with that horse — a lot of pats, a lot of brushing, a lot of carrots. And physics in this game are no joke. If you run into something, like a tree, you will eat it hard. If you crash into a stagecoach, you and your horse will likely die.

Shanley: My trusty steed, Pie-O-My (my wife’s offering), is the heart of the game for me. I almost feel embarrassed by how much I care for this fake horse. What you said is interesting, though, in regards to the camp and your horse. I was slightly concerned that it would feel like a chore to have to be a part of a camp, constantly checking on it and not just being free to do my own thing whenever and however I pleased, but that could not be farther from the truth. I not only feel obligated to check on the camp, but I want to do so. It’s impressive that Rockstar could pull off something like that in an organic way and still make it feel so fun.

Parker: I knew the game would be violent, but I was still taken aback by how realistic the gun violence is — the way a shotgun blast just decimates a body. And seeing people being hanged at the gallows is pretty intense, too. In fact, it is so brutal, I find myself not wanting to be violent unless I have to be, whereas in Red Dead Redemption, I just would shoot at everything and everyone sometimes. I do love the guns, like, a lot. They look so real and handle so well. I love that they need to be cleaned and maintained to function correctly. One of my favorite little things from Red Dead Redemption was hearing John cock his gun when the player aimed. Now you get to cock the gun yourself and recycle a round in the rifles after each shot. Such a neat touch — and a tricky one in a shootout. 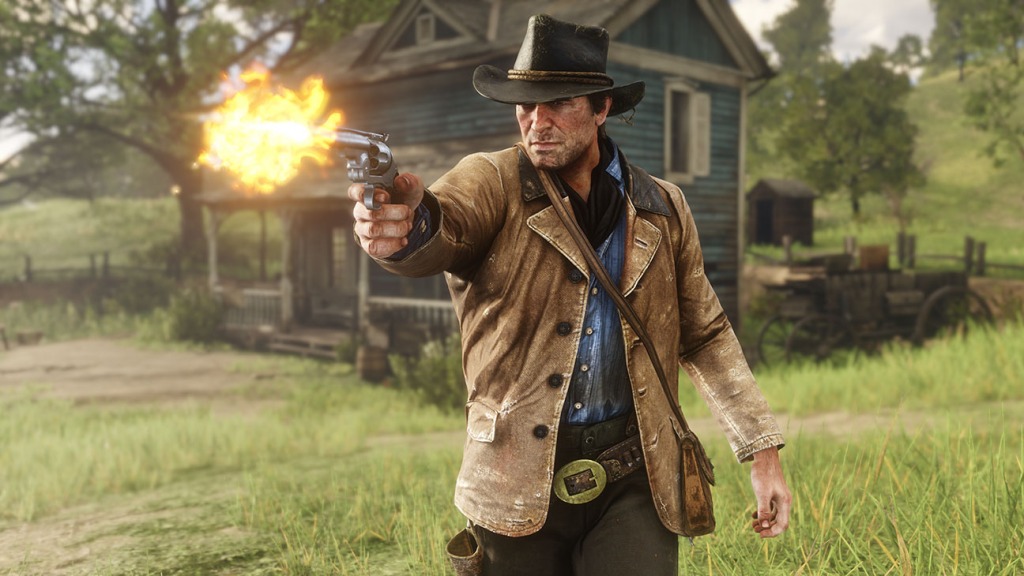 Shanley: Not only that but the reloading and cocking animations are different for each gun. I agree with you on how well the guns feel in this game. I love the differing weight and recoil factors that individual weapons have, it is very satisfying. The 19th Century American West was a brutal frontier, no doubt, but I similarly find myself trying to inject as much humanity into Arthur as I can — unless, of course, you mess with Pie-O-My, then you’re going to get got, pardner.

Parker: I am not too deep into the main story, but so far, what I have seen is really captivating. It reminds me of some of Unforgiven and some of Magnificent 7. The gang is great, the characters really fleshed out and they have a purpose for being there. They each contribute to the gang’s well-being in unique ways. There is no filler, either in the characters or the story. It is all substance and feels authentic.

Shanley: As the game progresses, that only becomes deeper. What adds an even greater level is the fact that this is a prequel to John Marston’s story in the previous game. Knowing the ultimate fates of so many of these characters makes it bittersweet to really get to know them personally in this game. I also think Arthur Morgan is every bit, if not more so, of a compelling lead as Marston. Morgan’s journals, his wit, his brutish charm — he’s a cowboy hero for a new generation and should stand alongside Clint Eastwood’s Man With No Name, John Wayne’s Rooster Cogburn and Val Kilmer’s Doc Holliday as one of the best the genre has ever produced.

Parker: Oh, yes! I am so with you on True Grit! With the dual revolver feature, I totally feel like Rooster Cogburn on horseback! And I see Kilmer’s Doc Holliday in there, too. It is amazing how down and dirty some townspeople can be and how “tony” others are in the world.