It’s been nearly a decade since Michael Myers last made his presence known on movie screens. The previous time around, it was rock star turned director Rob Zombie who brought the Shape back into the public consciousness and led a new generation of horror movie fans to seek out John Carpenter’s 1978 classic and the eight sequels that followed. Of course, Zombie’s Halloween (2007), which gave Michael Myers a background he’d never had or needed before, proved to be controversial. Even though the film raked in a little more $80 million worldwide, which made it the highest-grossing film in the series — a record that’s surely about to be beaten — there was the consensus that Zombie’s additional exposition, Grindhouse brutality, and roughed-up characters did the property no favors.

Zombie’s Halloween and its sequel Halloween II (2009) are still contentious films. And I get it. These aren’t easy films to love, particularly when compared to the perfection that is John Carpenter and Debra Hill’s original. Yet, there’s something within Zombie’s grungy, trailer park takes on an American classic that’s impossible to get clean of. Rob Zombie’s Halloween and Halloween II are dirt-under-your-fingernails movies, and while you may not like them, they leave an impression, and that’s more than many of the era’s remakes have managed to do.

Remakes are almost always controversial, but perhaps none more than horror remakes. Despite the fact a few of the genre’s remakes have gone on to become vital films in the horror catalog — John Carpenter’s The Thing (1982) and David Cronenberg’s The Fly (1986) chief among them — horror fans are fiercely protective of original films and canon. Rob Zombie’s Halloween came during a cycle in horror that was characterized by constant remakes, some with solid reception, but many that both critics and fans found disposable. Emboldened by the success of The Texas Chainsaw Massacre (2003), titles like The Amityville Horror (2005), House of Wax (2005), Black Christmas (2006) and The Wicker Man (2006) filled cineplexes. And that’s to say nothing of the Asian horror remakes like The Grudge (2004), Dark Water (2005) and Pulse (2006), which offered a steep downturn in quality from The Ring (2002). Yet a number of these remakes, while not reaching the heights of Cronenberg or Carpenter, did offer an execution that lived up to the original property, sometimes exceeded it and added to the conversation. Films like Zack Snyder’s Dawn of the Dead (2004) and Alexandre Aja’s The Hills Have Eyes (2006) made duds like The Fog (2005) or The Stepfather (2009) worth sitting through, in the hopes that some filmmaker would be able to make the case that if a remake was not necessary, it was at least worthwhile. Many of these movies were the horror films those in their 20s and 30s were weaned on. Before streaming platforms gave us such broad access to back catalogs, many a millennial horror fan, myself included, experienced these remakes before they had seen the originals, or at least saw them so close to seeing the originals that there was no time gap in which the seed of nostalgia or reservation could grow. 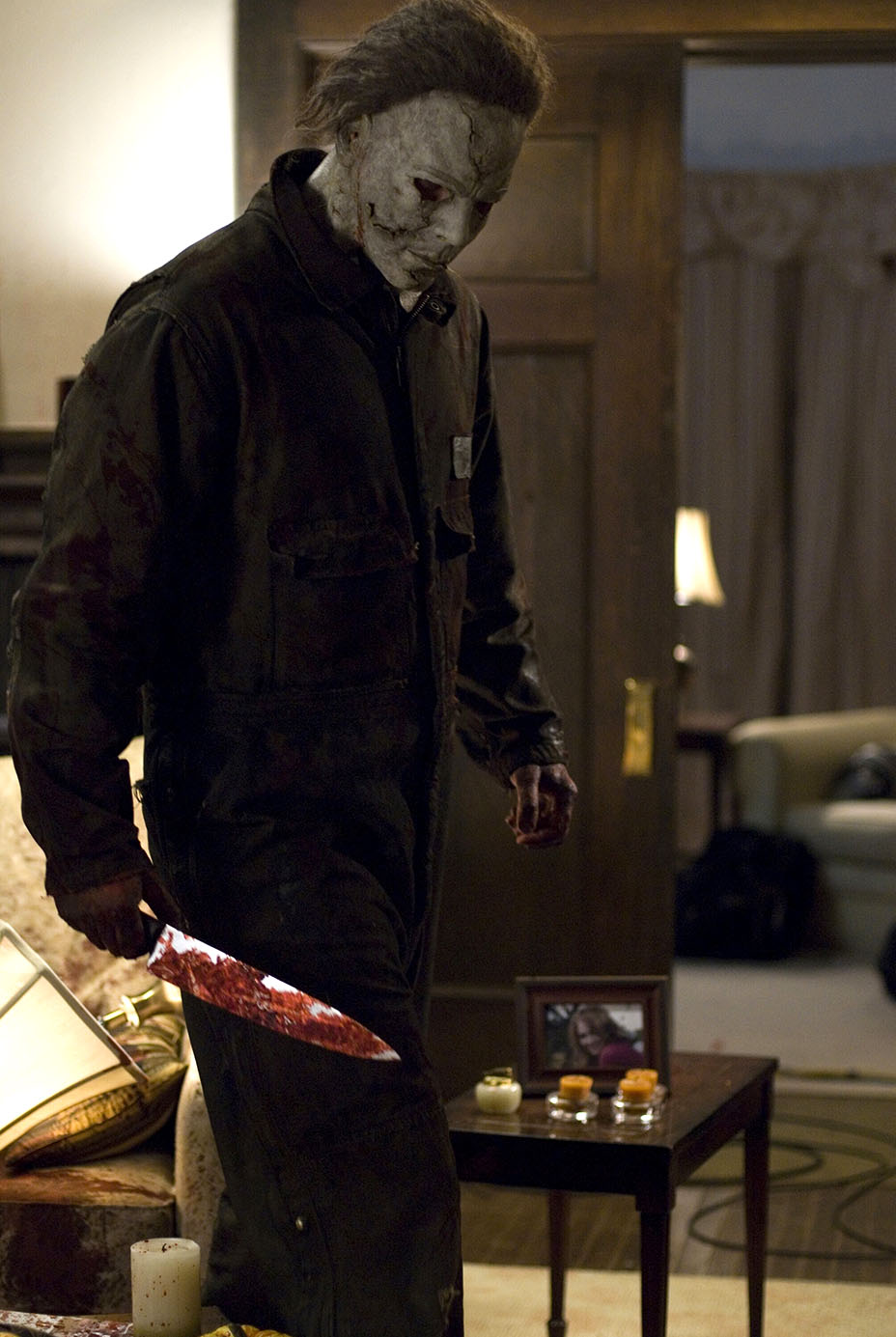 Perhaps it was this time factor that allowed Zombie’s Halloween films to make such an impression. When I watched John Carpenter’s film, though familiar with the premise and characters Michael Myers and Laurie Strode, it was in preparation for Zombie’s film. Thus, the changes that he offered weren’t so much treading on the original’s legacy but offering a point of comparison, carving out a space where both films could exist and be respected simultaneously. This is not to say that Zombie’s Halloween exceeds the quality of Carpenter’s. It doesn’t. But as a film lacking the beautiful simplicity of Carpenter’s, Halloween ’07 made a case for itself as an inelegant, raw and dirty psycho-fantasy drawn out of the idea that, as the Zombie-utilized Nazareth song goes, “love hurts.”

One of the biggest changes to the Halloween mythos that Zombie created was an explanation for Myers’ evil. While Carpenter’s film presented a blank canvas of pure wickedness — later retconned and given explanation in Halloween: The Curse of Michael Myers (1995) — Zombie gives him humanity, makes him a result of circumstance rather than preternatural inhumanity. Young Michael Myers (Daeg Faerch) grows up amid extremes, raised by foul-mouthed hicks who owe more to Texas Chain Saw Massacre filmmaker Tobe Hooper than to John Carpenter. With a mother forced to work too much at a strip club to support her family, a homophobic and abusive stepfather, a sister equally abusive and school bullies possessed by a level of cruelty beyond their years, the Myers boy never stood a chance. He was always going to become something. The mask simply gave him a shape through which to channel his sense of loss, betrayal and rage. Michael is, to borrow from Sam Loomis (Malcolm McDowell), a result of internal and external influences. As the film’s title card says, “the darkest souls are not those which choose to exist within the hell of the abyss, but those which choose to break free from the abyss and move silently among us.” It’s psycho-babble to be sure, but one that Zombie holds true to over the course of his two films. 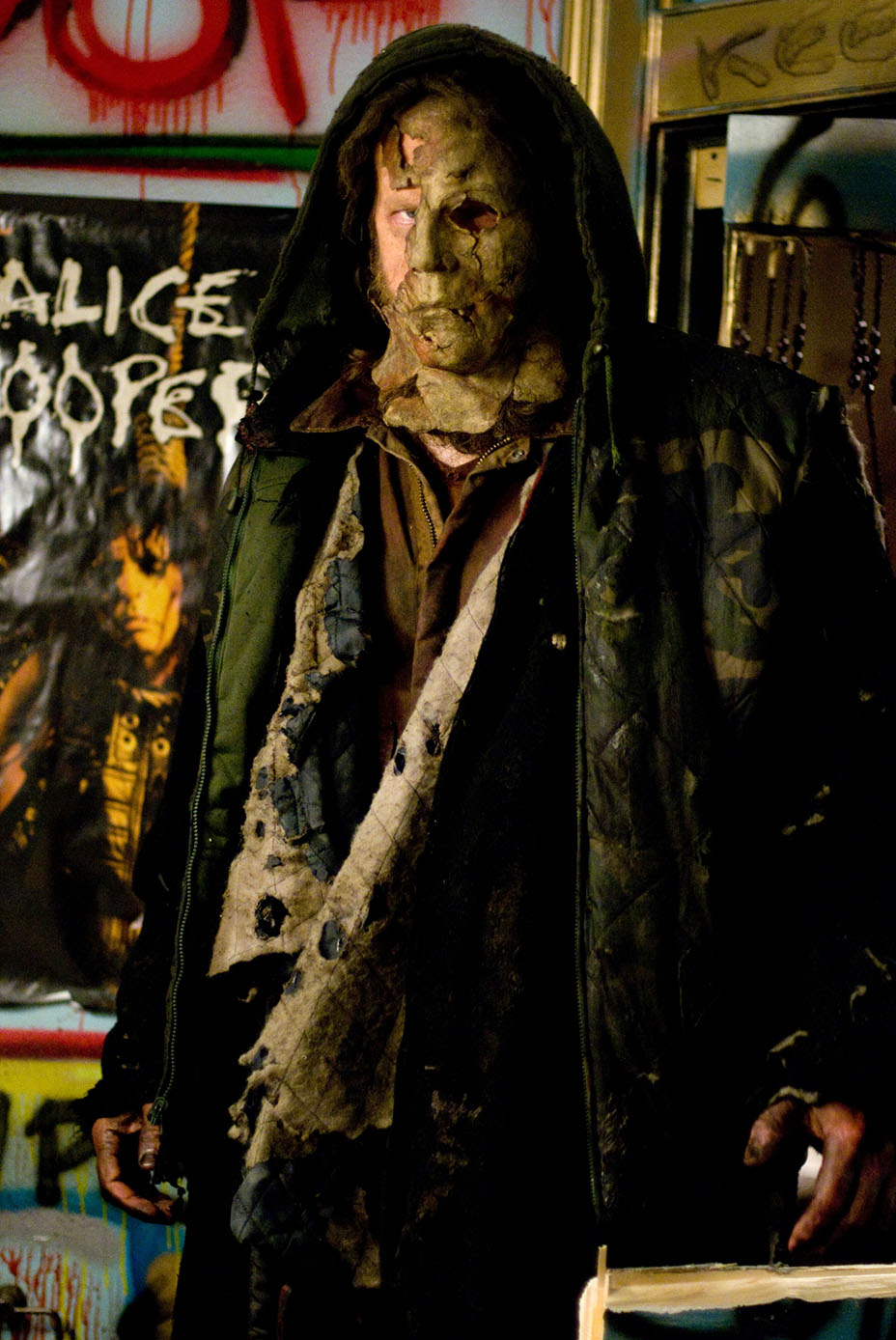 Is Michael a less terrifying figure once we see so much of his childhood and are given concrete explanations that explain why he is the way he is? Perhaps. But this need to explain evil feels apt in a decade defined by looking for answers as to why people commit the acts of atrocity they do. Sept. 11, 2001, and the War on Terror that followed shaped our horror films. How could they not? Even though the events that explain who Michael is and why he does what he does takes place in the ’90s, there’s a sense that Zombie, whether consciously or as a result of the world in which he made his film, is placing our need for answers in the subtext, tying modern horrors to the past in a way that is directly traceable, though obscured. For Zombie, horror is generational and familial, and that’s something that rears its bloody head in his prior films as well — House of 1000 Corpses (2003) and its sequel The Devil’s Rejects (2005).

Once Halloween reaches the second act and moves to modern day, revisiting much of the plot mechanics of Carpenter’s original through Laurie Strode (Scout Taylor-Compton), the film still remains fixated on Michael. He’s not a boogeyman, but a fully formed man driven by primal urges. Carpenter’s Michael evoked purpose while never letting us in on his intent. But Zombie’s Michael Myers (Tyler Mane) remains a lost little boy trying to find his way back to a home, a loving familial connection that never existed. Loomis and Laurie are both paths toward what he seeks — the loving father figure and the kind-hearted sister — but neither has the capability to form around him the family that he needs, as one seeks to control his narrative and the other fears his intrusion into her life of normalcy.

Both of Zombie’s Halloween films owe more to Halloween II (1981) than to the original, with the plot of Laurie being Michael’s sister coming to the forefront in a more powerful way. But beyond Michael’s backstory and the inclusion the sibling subplot, Halloween ’07 remains largely faithful to Carpenter’s, while never refraining from an aesthetic that is pure Rob Zombie. The film’s sequel Halloween II (2009) was met with even more disdain, despite Zombie backing away from Carpenter even more and venturing into his own experimental take on the great American babysitting tragedy by way of the hallucinatory metaphor of a white horse. It’s in Zombie’s Halloween II that the director is at his most interesting and assured as a filmmaker. Michael Myers takes a back seat to Laurie Strode and the trauma she’s endured. Taylor-Compton’s girl-next-door vibe from the first film is stripped away and replaced with something damaged and genuinely human in its fragility. It’s a performance, one of the best and most surprising to come out of horror in that decade, that rejects former notions of the final girl and her invulnerability.

While Jamie Lee Curtis’ Laurie was tough, assured, and in control even in the grips of fear, Taylor-Compton’s Laurie is caught in a downward spiral, and not simply because she looks like she belongs in a Nine Inch Nails video. Laurie becomes a tragic figure, one that echoes her brother Michael, as the film seeks to explore whether a similar confluence of internal and external factors can once again create the hurt and rage that created Michael Myers. Zombie creates a dark fairy tale where one character’s wish for family has devastating ramifications, particularly for the foster family Laurie has found. While Annie Brackett and her father Sheriff Brackett had little consequence outside of the 1978 film, here, portrayed by horror legends Danielle Harris and Brad Dourif, they become a possible means for Laurie to escape some of the damage, or at least share it. But Michael, and Laurie herself, rip away that outlet over the course of the film, until their bottled emotions, both on the surface and subconscious, explode and leave nothing but devastation and the shattered remains of families in their wake.

While so many horror remakes in the 21st century feel like a shadow of the original, Zombie managed to create two films that feel fully formed, even if audiences disagree over whether they enjoy the shape they took. Halloween ’07 is a remake with a voice of its own and Halloween II ’09 is one of the most original films to come out of the slasher movie subgenre, and ended on a note far more interesting than any of the sequels that had come before it. The psychological aspects of horror, the trauma of the final girl, and the thematic through-lines across franchises that have become so key in modern blockbuster horror today in such films as Get Out, A Quiet Place and even David Gordon Green’s newest Halloween, were evident in Zombie’s films, which was uncommon for slasher movies. As horror fans, we’re constantly seeking out the new, and Rob Zombie gave us something new with his Halloween films. Risky, divisive and elevated only by the standards Zombie wished to reach, Halloween and Halloween II are love letters to horror’s broken figures and broken minds. They hurt, they scar, and yet in the end, they are entirely worthwhile exercises in giving new voices to old stories.

The Comeback of the Slasher Movie