How do you create a humanoid amphibious creature that a cleaning lady, Sally Hawkins’ Eliza, could fall in love with? Guillermo del Toro challenged his team with that question as they embarked on The Shape of Water, his imaginative variation on the theme of Beauty and the Beast, which Fox Searchlight releases Dec. 1.

“Guillermo brought me in and said, ‘Give it a soul,'” Hill recalls, which meant fashioning a creature that was sexy and with whom a woman could fall in love. Its face had to have key features that included big, expressive, doe eyes, “kissable” lips, a strong jaw and cleft chin. The body required a slim waistline, broad shoulders, and “Guillermo was adamant that the creature have a nice butt.”

The $19.5 million production used a variety of techniques to ensure the fish-man would move naturally: a man in a suit, makeup and computer graphics. 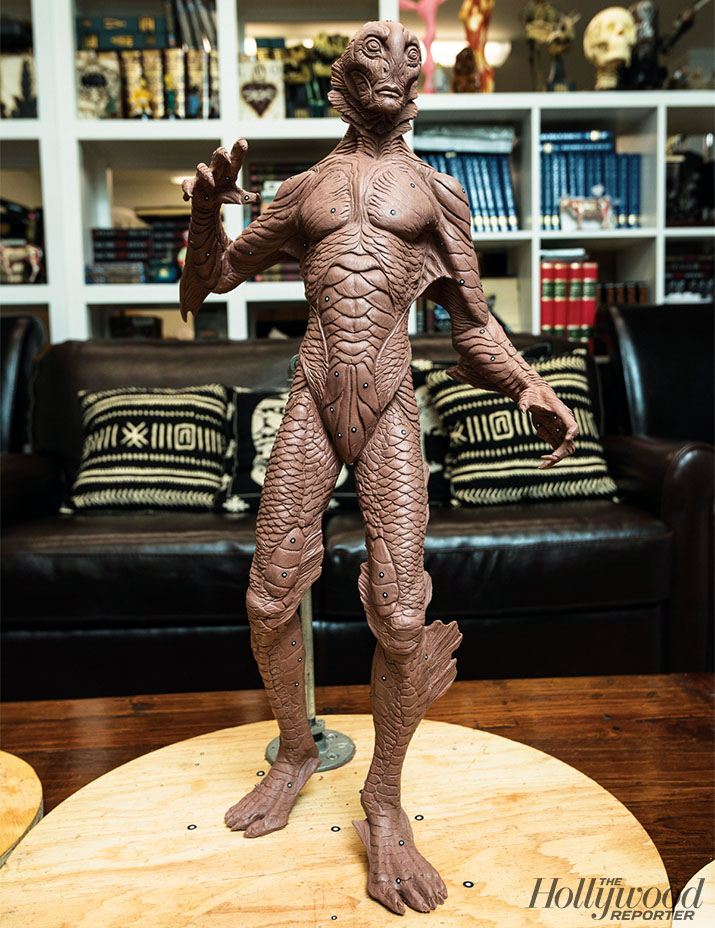 Legacy Effects developed the makeup effects and a heavy latex rubber and silicone suit with radio-controlled gills for actor Doug Jones (who played the del Toro creatures Pale Man in Pan’s Labyrinth and Abe Sapien in the Hellboy series).

Jones wore prosthetics on his face, but the number of animatronics that could be built into the skintight suit was limited. Jones’ own eyes and mouth couldn’t be used since those of the fish-man are not human-shaped, so the actor’s features were replaced with CG versions by Technicolor-owned VFX house Mr. X.

Every creature shot was digitally altered in some way — from the very subtle (making the eyes blink) to the fully CG (the underwater body shots). “Our marching orders were to keep the audience guessing; there’s a charm to practical effects,” says digital effects supervisor Trey Harrell. “The majority of the digital work was eye replacement and forehead, upper-lip performance.” The VFX team referenced how Jones performed the scene, but instead of using facial motion capture, they hand-animated the effects.

Finally, the creature needed a “voice,” which was created in layers, starting with a foundation based on vocalizations of supervising sound editor Nathan Robitaille and del Toro himself. Robitaille then manipulated the pitch to feel “unusual,” and also subtly layered in additional sounds of swans, frogs, hippos, monkeys and other vocalizations to complete the touching performance.