Darkness, tears and sighs is what the latest trailer for Luca Guadagnino’s Suspiria promises. Thursday morning, after a week of cryptic teasing, Amazon Studios released the full trailer for their remake of Dario Argento’s Italian horror masterpiece. Although the 1977 film, a staple among horror fans, is still something of an unknown entity to general audiences when compared to the likes of The Exorcist (1973) or Halloween (1978), it remains a sacred cinematic property. The notion of a remake certainly didn’t thrill everyone when it was first announced, originally in 2008 with the upcoming Halloween (2018) director, David Gordon Green, attached.

How Rami Malek Learned to Move Like Freddie Mercury

'Suspiria' and Rethinking the Witch

But in the 10 years since, Hollywood’s horror remakes have waned in output, to the effect that a remake of Suspiria doesn’t seem quite so damning or unnecessary. Coupled with the fact that this new version of Suspiria is directed by Guadagnino, who wowed audiences with best picture nominee Call Me by Your Name (2017) last year, and we have a remake that looks to be not only the horror event of 2018, but a necessary interpretation by one of the great modern Italian filmmakers. 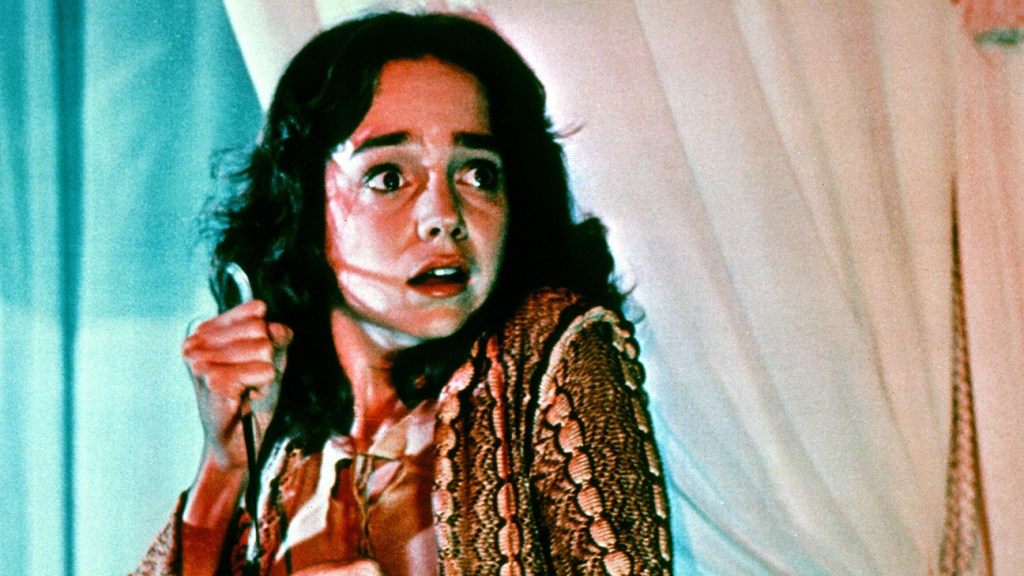 The immediate takeaway from the trailer, something we got a sense of in June’s teaser trailer, is that the film’s visuals will differ drastically from the 1977 version. Argento’s film is punctuated with electric blues and reds that bleed into each other, forming purples and pinks that manage to create a sense of beautiful brutality rather than the warmth we’d expect from those colors. With long, empty corridors and open spaces that suggest secrets hidden but impossible to find in the vastness, Argento’s Suspiria, through Luciano Tovoli’s cinematography, set an aesthetic standard that today has been followed by filmmakers like Nicolas Winding Refn. Rather than attempt to replicate Argento’s style, Guadagnino creates one of his own that aims to be just as chilling.

The use of grays and browns in the remake may come across as dull by comparison, a symptom often attributed to modern studio horror, but that’s not all that’s going on in the frames of this trailer. Guadagnino and cinematographer Sayombhu Mukdeeprom are using flesh tones, ones that gel with the film’s use of dance and bodies in motion. The color red also stands out prominently in the trailer, particularly in Suzie Bannion’s (Dakota Johnson) clothing and hair. The ballet dancing, which we only get glimpses of here, is lively and involving. This stands in contrast to the sense of death and decay suggested by the color palate. While not nearly as vibrant as Argento’s film, the film does make allusions to the original in the way light washes over several characters and the surroundings, notably the green and purple shades that wash over Madame Blanc (Tilda Swinton) early in the trailer. While the remake will lack the thrumming music of prog-rock group Goblin, Radiohead’s Thom Yorke seems to have composed a score that will feed our fear just as well.

The film’s narrative, which finds a young American dancer traveling to a dance academy in Berlin only to discover a sinister supernatural presence, seems to follow similar beats as the 1977 film, at least at first. While Susie remained the incorruptible wholesome protagonist in the original film, where she was portrayed by Jessica Harper, the remake suggests a darker turn for the character. “You’re making some kind of a deal with them,” Sara (Mia Goth) says, accusing Susie. Despite the horror happening to those around her, including Chloe Grace Moretz’s Patricia, Susie seems captivated by Madame Blanc in a way that suggests our protagonist may not be the film’s moral center. Is it possible that rather than defeating the witch at the heart of the academy, Susie will become one herself? While it would be a drastic shift from the original, it would fit the darker and more ambiguous endings that many modern horror movies have adopted.

Beyond possible character shifts, the trailer also suggests a wider narrative scope than the original film. Argento followed up and broadened the events of Suspiria with Inferno (1980) and Mother of Tears (2007), which together form his Three Mothers trilogy, which was inspired by Thomas de Quincey’s collection of essays and prose poetry, Suspiria de Profundis. Inferno featured Mother Tenebrarum, Mother of Tears had Mother Lachrymarum, and Suspira included Mother Suspiriorum, who respectively sought control over the world with darkness, tears and sighs. While the book featuring their names in the trailer could simply be an Easter egg for fans of Argento, the fact that both the teaser and the latest trailer feature this shot in close-up suggests Guadagnino’s film may be exploring a deeper mythology, and one that doesn’t just center on Mother Suspiriorum.

Guadagnino’s Suspiria could set a new precedent for horror remakes in terms of respecting the original and serving as a companion piece instead of attempting the impossible and trying to better it. While there’s sure to be plenty of surprises still waiting in the darkness when the film is released, this trailer promises to chart new territory both in terms of style and story while reminding us that after all this time, we still know nothing about witches.

Suspiria will open in New York and Los Angeles on Oct. 26, followed by a wide release on November 2.