Continue to The Hollywood Reporter SKIP AD
You will be redirected back to your article in seconds
Skip to main content
October 6, 2018 6:00am
Logo text

How do you build a cinematic universe around supporting Spider-Man characters without Spider-Man? That’s exactly the question that Sony is in the process of answering, starting with this weekend’s release of Venom.

It should come as no surprise by now that Ruben Fleischer’s Venom makes significant changes to the character’s origin story, removing journalist Eddie Brock’s connection to Peter Parker/Spider-Man. Comic book movies have a long history of changing the origins of characters in the process of adaptation, sometimes to the point where characters have little in common with their source material. This was perhaps the central concern hanging over the heads of comic-book savvy audiences going in to Venom, though not enough of a concern to slow down its box office domination this weekend.

'Spider-Man: No Way Home' Returning to Theaters With Added Footage

Can Venom/Eddie Brock still be the character that has captivated fans over the past three decades without an origin story expressly tied to Spider-Man? Absolutely — that is, if we accept the fact that Venom is more than another name in Spidey’s sizable rogues’ gallery. Despite whatever comic canon we hold dear in our hearts, the truth of the matter is that Venom doesn’t need Spider-Man. In fact, he may be more interesting without him.

On the last page of The Amazing Spider-Man No. 299, a musclebound monstrosity with Spider-Man’s symbiote suit stretched over his massive frame and a menacing grin stretched across his face says two words: “I’m home.” This was readers’ first full look at Venom, the character created by David Michelinie and Todd McFarlane, who had been teased across Spider-Man titles in the months prior. Those initial appearances of Venom and his thirst for vengeance on Spider-Man were riveting, largely because of the unique style and edge McFarlane brought to the world of Spider-Man. But once Venom began appearing in Spider-Man’s books more frequently, and with the same motivation, he lost a significant amount of the threat he first had when he crept his way into Peter Parker and Mary Jane’s apartment. 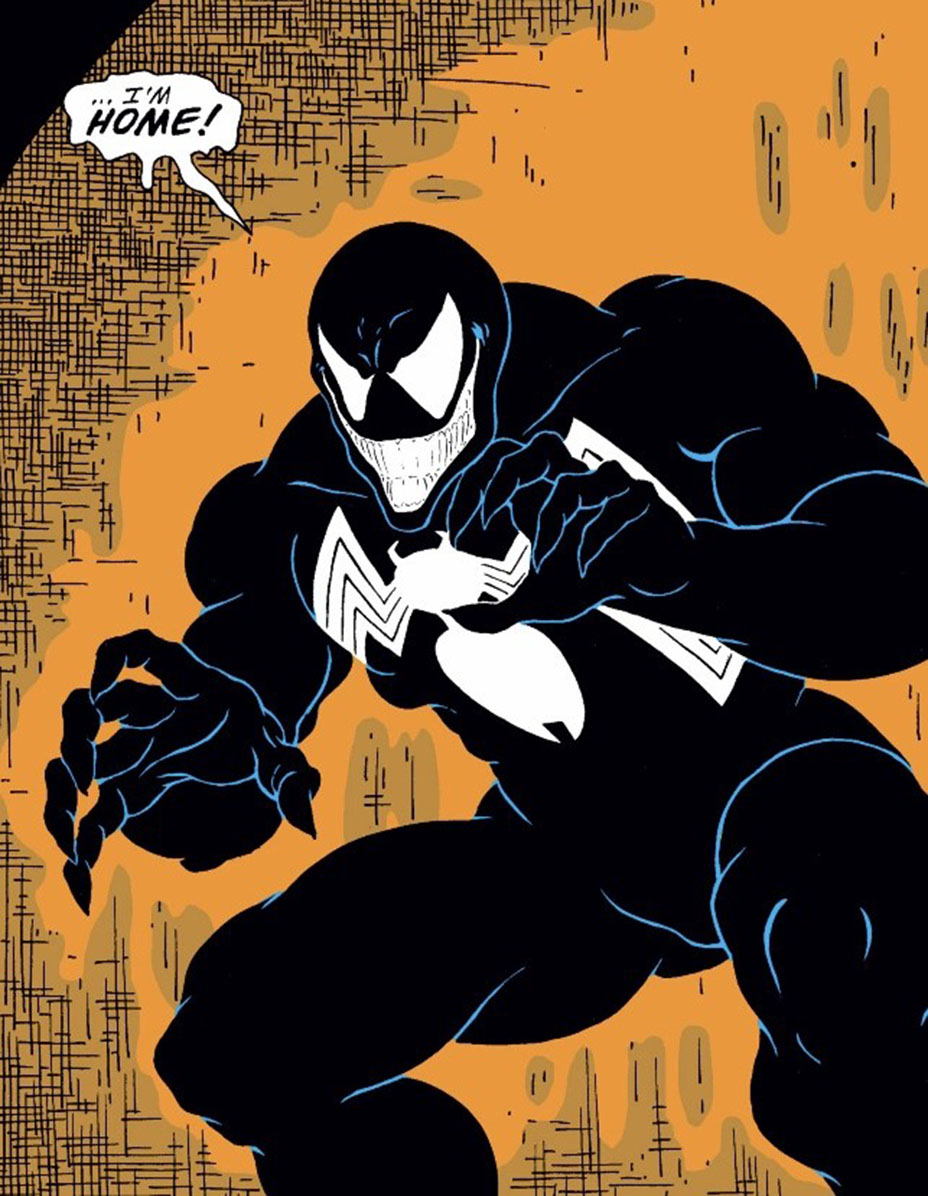 Venom’s villainy was always personal and therein lay the problem. While Spider-Man’s other significant adversaries Doc Ock, the Green Goblin, Vulture and Mysterio were driven by greed, or personal endeavors that Spider-Man happened to get in the way of, and thus their desire for revenge was logical from a supervillain standpoint, Venom’s often lacked logic. For Brock, it was revenge all the time and mind-consuming obsession. In those early appearances, Brock got the catch-all comic book motivation of being crazy. But crazy only goes so far.

Brock’s motive for hating Peter Parker and Spider-Man has always been a bit flimsy. He published an interview with a man who claimed to be serial killer the Sin-Eater, who happened to be a serial confessor to crimes he didn’t commit. When Spider-Man caught the real Sin-Eater, Brock was shamed and disgraced, barred from the only career he ever loved and, as we found out later, his one chance at making his abusive father proud. But the thing is, Brock’s firing was his own fault, not Spider-Man’s, and for a character supposedly as smart as Brock is said to be, his sense of blame and guilt always felt like a stretch, as did his understanding of journalism ethics. When Brock, on the verge of suicide and praying for forgiveness at a church, joined with the symbiote spurned by Spider-Man, he was consumed with a vengeance so singular that it at times became unintentionally comical. 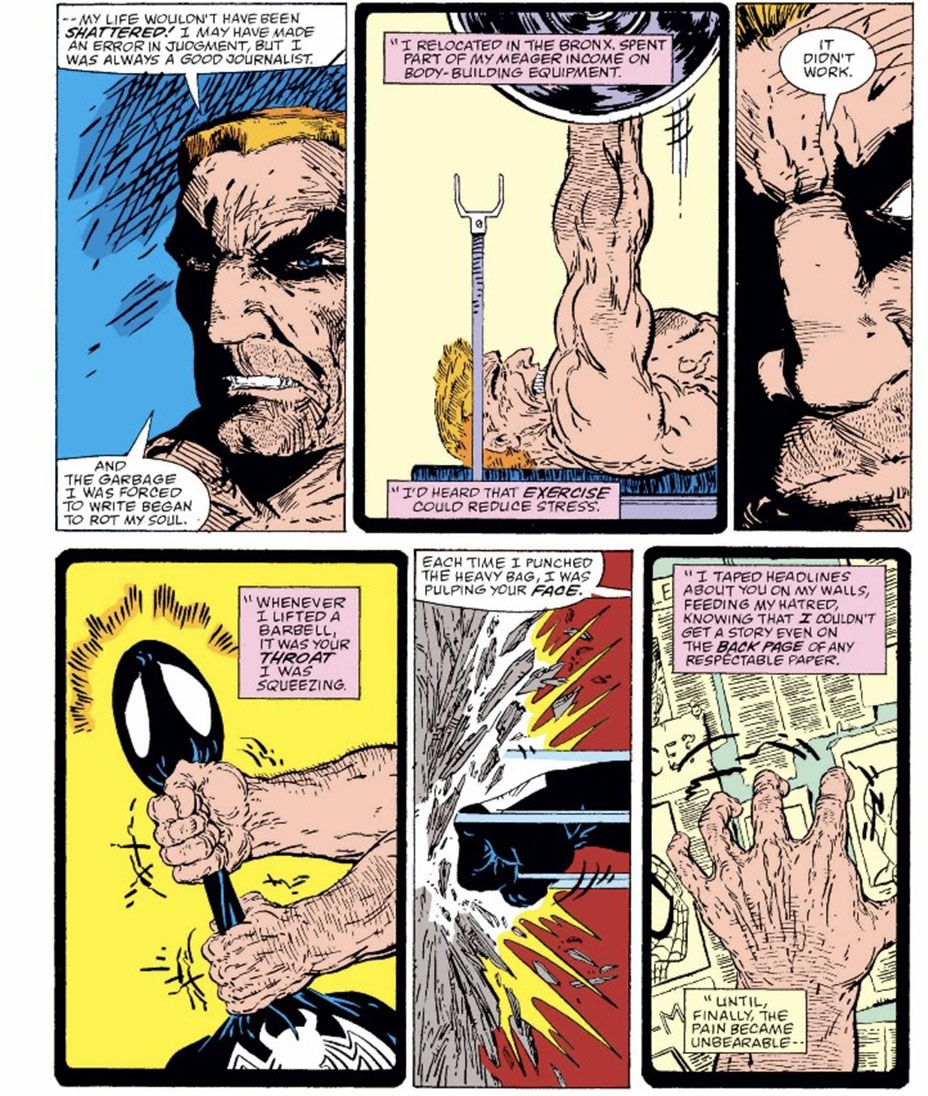 A stalker driven to kill Spider-Man is interesting the first couple times, but after a while it became more of the same, and Brock’s motivations became more difficult to believe as a long-term threat. Yes, he looked cool, but the guy had no sense of expanding his tactics, looking at the big picture or simply taking a cold shower. He challenged Spider-Man physically, but there was an emotional disconnect between the two characters, furthered by Brock’s belief that he was innocent and Spider-Man was the source of all his misfortune. If there were some truth behind the accusation, some source of guilt for Spider-Man, then the scenario would be different. But Venom’s fixation never came across as naturally as villains like Norman Osborn’s or Kraven’s because they had something to lose, whereas Brock didn’t.

Beyond his dubious motivations — a number of writers would later question if they were Brock’s or the symbiote’s — Brock wasn’t that thought-provoking of a character originally, particularly when pit against Peter Parker, arguably the most interesting man in comics out of the costume. Guilty Catholic bodybuilder Eddie Brock was a Sunday pot roast with a mullet. It was only when the character took off in his own miniseries, away from Spider-Man, that he came into his own.

Surprisingly Venom never received an ongoing series until 2003. But throughout the ’90s, Venom populated nearly two dozen miniseries and one-shots that made Brock into something more than a bully with a grudge. Beginning with Venom: Lethal Protector (1993), Venom became independent of Spider-Man after a truce, moved to San Francisco, and began protecting the city’s innocent and homeless population. Spider-Man wasn’t entirely absent, showing in the occasional miniseries to lend a hand or help Venom stay the course of his lenient no-killing policy, but largely Venom was left to his own devices and writers were able to delve into who Eddie Brock really was — a severely depressed individual with abandonment issues and a moral compass that bordered on zealotry. He was forced to become more introspective about his actions and struggle with his past mistakes and efforts to be a hero. But these miniseries also used his “madness” as a way to bring some humor to the character, and a quippy nature not quite as sharp as Spidey’s but more varied than “I’m going to eat your brains.”

In the 21st century, Venom has been put through the ringer, suffering from cancer, separation from his symbiote and, more recently, the very real possibility that his symbiote was only a Band-Aid over what seems to be schizophrenia and bi-polar disorder. His mental illness has evolved from comic book crazy, to a complex, and genuine look at a man trying desperately to keep it together.

It’s the solo runs of the ’90s that Fleischer’s Venom borrows from, sidestepping his Spider-Man obsession but still keeping the character intact. Hardy makes the character endearing from the outset, a down-on-his-luck loser who is able to realize his own mistakes. While not overcome with the same severity of mental illness of the comics version, he is a more grounded human being that is clearly struggling and looking for comfort. Venom is able to exist as his own character in the movie, rather than a character adjacent to Spider-Man and Peter Parker’s personal arc.

Perhaps Venom simply isn’t a great Spider-Man villain. Spider-Man 3’s (2007) Venom, portrayed by Topher Grace, borrowed from Brock’s petty comic book motivations, resulting in the character feeling empty, whiny and ancillary to the real emotional drive of the film established by Peter’s battle against Harry and the Sandman. It can be argued that this is because Sam Raimi was never that interested in Venom, but it’s not like he sabotaged the character out of spite. Rather that, onscreen against Spider-Man, Venom was fully revealed as a weak villain with a cool design.

This isn’t to say that it wouldn’t be a blast to see Tom Hardy’s Venom interact with Tom Holland’s Spider-Man, but an adaptation of their relationship from 1988 doesn’t do either character any favors. Venom makes for a more fascinating superhero, or antihero if you prefer, than he does a villain. As a villain, Venom doesn’t allow for us to see Spider-Man at his best, and Spider-Man doesn’t allow for us to see Venom at his most versatile. While it’s too early to say whether Hardy’s version of Venom will meet Spider-Man as Fleischer hopes, right now the wicked web-slinger is right where he can make the biggest, gooiest impression.