Continue to The Hollywood Reporter SKIP AD
You will be redirected back to your article in seconds
Skip to main content
July 16, 2019 2:59pm
Logo text

Hear that rumble in the distance? That’s not just any storm. Today we learned that the God of Thunder, Thor, will be returning for a fourth entry in the Marvel Cinematic Universe. This news comes ahead of Marvel Studios’ San Diego Comic-Con panel on Saturday where fans are expecting to get a first look at Marvel’s plans for its next phase. Taika Waititi, who directed Thor: Ragnarok (2017) will return to helm the fourth entry that will see Chris Hemsworth wield the lightning once again. After the events of Avengers: Infinity War and Avengers: Endgame, Thor is in a very different place than where Waititi last left him. Most of the Asgardians are dead, Thor’s no longer a monarch or an Avenger (Is he a Guardian of the Galaxy?), Loki is dead, and most of his greatest adversaries from the comics have been dispatched. Thor 4 will be a challenge, but if there’s anything the God of Thunder welcomes more than mead, it’s a challenge.

Thor: Ragnarok grossed $854 million worldwide, compared to the worldwide gross of Thor (2011), $449.3 million and Thor: The Dark World $644.6. It’s clear that Waititi captured something audiences responded to, with the majority of critics and audience members naming it their favorite of the series. Before the success of Ragnarok, Thor always felt like one of Marvel Studios’ secondary franchises, despite boasting one of Marvel’s biggest characters. There was a lack of confidence in the comic book mythology, and a hesitance to delve into some of the more fantastical elements associated with the Nine Realms. Ragnarok didn’t rectify all of that, and like the previous entries it still suffered from too little time to explore too many characters, and quick deaths for characters and themes yet to be given their due. But at least it did so with more style and passion, one that reflected the art of legend Jack Kirby.

While Waititi’s film didn’t deliver on the serious epic those familiar with the Ragnarok of the comics were expecting, it did rejuvenate interest in the character for both audiences and Hemsworth. Hemsworth’s ability to harness his comedic timing in his last three performances as Thor have allowed for a greater emotional range within the character. Undoubtedly Thor 4, which also sees Waititi on board as writer, will continue to explore new facets of the character, while leaning on Waititi’s penchant for action-comedy and surprising emotional beats. Waititi’s return to the franchise likely means we won’t be getting the kind of grandiose high-fantasy and exploration into millennia spanning godhood explored in Jason Aaron’s current, stunning run on the comic book series. But the filmmaker has never made two films that feel entirely alike, and I can at least be confident that Thor 4 will be different from Thor: Ragnarok.

So is there anything we can expect from Thor 4 this early on? It’s hard to imagine Valkyrie (Tessa Thompson) won’t return as the ruler of New Asgard. It seems possible that the Hulk (Mark Ruffalo) could return as well, especially since the distribution rights issues have left the character unable to lead his own series for the foreseeable future. Korg (Taika Waititi) and Miek, two of Ragnarok’s breakout characters, seem like guarantees as well to round out Team Thor, or the Revengers. As for new characters, fan-favorite character Beta Ray Bill is long due to make his debut. He was teased in Ragnarok, with a statue of his head appearing on Sakaar. Early drafts of the script included the character but he was dropped after it was decided there wasn’t enough room to do him justice. The Korbinite hero seems right up Waititi’s alley of weird. But the events of the comic that allowed Beta Ray Bill to join the Asgardians and prove his own worthiness would have to be restructured for the MCU. Walt Simonson’s run on The Mighty Thor saw Beta Ray Bill leading the charge against Surtur, who was responsible for the death of most of his race. But with Surtur (Clancy Brown) having already brought Ragnarok about, and his use as a punchline rather than the ultimate evil, there’s arguably little threat left that could come from the villain. Like Malektih, Surtur was given little room to grow in the MCU. But hopes for a great big bad aren’t entirely lost. 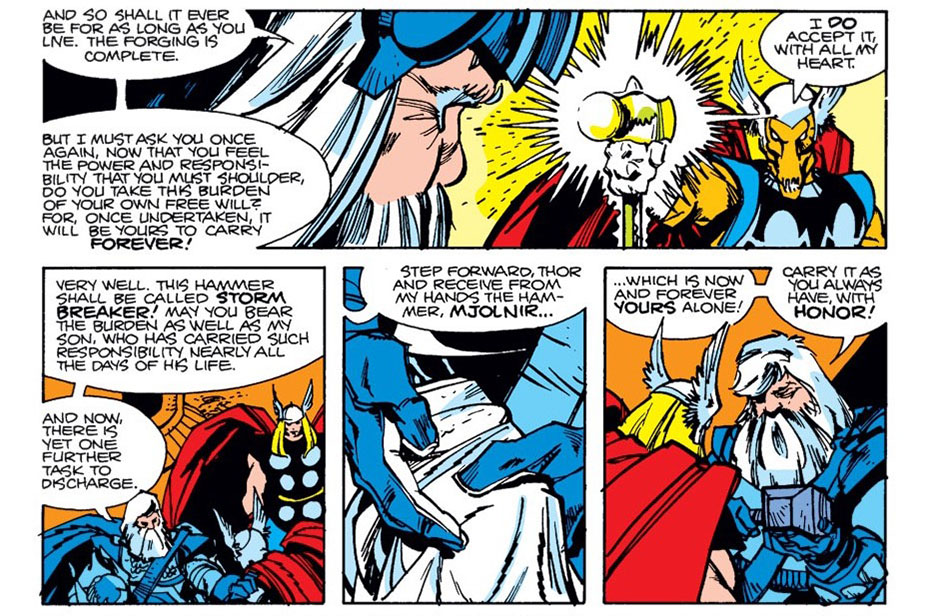 Assuming Thor 4 does introduce Beta Ray Bill, we likely won’t see the same story beats of the comics, with Thor becoming unworthy and losing possession of Mjolnir, given how that arc was already covered. So without Surtur or Mjolnir, what could lead Thor and Beta Ray Bill to unite? To answer that question, we must go back to Stan Lee and Jack Kirby’s original Thor run, specifically Thor No. 154 “To Wake the Mangog.” The Mangog is one of Kirby’s goofier-looking villains, which again seems to fit with Waititi’s interests. But despite his appearance, Mangog has one of the more interesting backstories of Thor’s adversaries. The monster is the total hatred of a billion alien lifeforms whose race was wiped out by Odin. Mangog is awakened by Ulik the Troll, another frequently appearing Thor character we’ve yet to see in the MCU, in hopes to form a partnership. But Mangog has no interests in partnerships, and his hatred drives him to seek out the Odinsword and draw it from its scabbard, an act that will end the entire universe.

Thor No. 154 to No. 157 could be just the storyline Thor 4 needs in order to continue those themes established in Ragnarok, Infinity War and Endgame. Ragnarok already revealed Odin’s (Anthony Hopkins) imperialist tendencies, through wars waged alongside his daughter Hela (Cate Blanchett). And while Thor coming to term with his family history was an aspect of Ragnarok, it felt shortchanged in favor of the Planet Hulk-inspired Sakaar storyline. Mangog in Thor 4 could continue that exploration of legacy, one in which not even Thor’s relinquishment of his crown can protect him from. And perhaps Beta Ray Bill could be the last surviving member of that now extinct race that drives the Mangog, allowing for the character to receive his own exploration of legacy that parallels Thor’s. Thor and Beta Ray Bill could be seen as two contemporary heroes battling to right the wrongs of their ancestors, which could play into the themes of reparations that imperialism entails.

While no Thor film has yet to completely balance all of its numerous elements in a way that fully captures the magic of reading the very best Thor comics, Waititi has allowed the franchise to make serious strides. Now that he’s comfortable with this world and hopefully able to employ more of his style as the screenwriter, and Hemsworth is feeling more confident about his future as Thor than ever before, we can only expect a stronger film. Hopefully the film doesn’t mark the end of Thor’s franchise, but a new beginning in which so many more stories and tones for the character can be explored. So bring on Beta Ray Bill. Bring on the Mangog. And bring on Thor for round 4. And may they all be worthy.

Tatiana Maslany, Mark Ruffalo on She-Hulk Future: "There's Not Going to be Another 'Avengers' Without Her"