It’s been seven years since Sony last brought the Men in Black to the big screen with the time-travel-focused third installment. Now the studio is hoping the addition of Chris Hemsworth and Tessa Thompson — fresh off their well-regarded pairing in Thor: Ragnarok — will provide the spark needed with the loss of original stars Will Smith and Tommy Lee Jones.

Thompson’s character has made it her mission to find the mysterious Men in Black. When she succeeds, she’s welcomed into the group as the newly minted Agent M, assigned the veteran Agent H (Hemsworth) as her partner. It’s not long before the team is assigned a globe-hopping mission to root out a suspected mole in the organization.

Sony’s campaign for Men in Black: International features the same slick technology and humor the franchise is known for. A $30 million stateside opening weekend tracking estimate (which would mark a franchise low) speaks to a challenge that marketing for the movie faces. It hasn’t been helped by reviews, as the film sits at a less than mediocre 30 percent on Rotten Tomatoes and 43 percent on Metacritic.

Audiences definitely got the message that the overall humor and tone from the previous movies will carry over to this new one on the poster (from marketing agency BOND) released in late December. Hemsworth and Thompson are shown with their feet up on a desk looking relaxed and cool while sporting big, glowing weaponry. Copy at the top reads, “The universe is expanding.”

Two more posters arrived in early April, one (also from BOND) showing close-ups of Agents M and H as they’re about to flash their memory-erasing device at the camera and another (from marketing agency Creative Arts) that displays the whole cast along with Paris landmarks to communicate that the action has shifted overseas.

Agents H and M are once more shown as stylish and confident on the IMAX poster. The pair are leaving the scene of an extraterrestrial incident on the Real 3D poster that, with the addition of the Union Jack in the background, once more highlights the international setting of the story. For Dolby Cinemas, a picture of the two agents looking stylish and ready for action is once again used, without much else going on.

The first trailer (21.1 million views on YouTube) from December makes it clear we’re following Thompson’s character in this story as she infiltrates the Men in Black’s headquarters, making the case that her finding them makes her perfect for the job. She suits up and is sent to London, where she’s paired with Agent H on a mission involving investigating how the agency has been infiltrated. Lots of exact locations and silly aliens follow, and the trailer ends with Hemsworth’s Agent H wielding a very small hammer that is easily caught.

Late April brought the second trailer (12.3 million views on YouTube), introducing MiB in the same way as the first movie did and showing how Thompson’s character has found the organization because she wants to be part of it. She’s sent to London and partnered with Agent H, and the two of them are soon investigating the Hive, a mysterious race that can shape-shift to assume anyone’s identity. That leads to all sorts of fighting and shooting, as well as some cultural humor, as Agent M is outside her usual environment.

A promoted tweet that ran in mid-May used a 30-second commercial offering audiences only a brief look at the story, focusing instead on the humor and big special effects they would be enjoying. Another promoted post later on included a nod to Hemsworth’s role as Thor, including a clip from the trailer of him wielding a much less majestic hammer.

? Lexus, which debuted a co-branded commercial in late May to promote the 2020 Lexus RC F, showing it as the car used by H and M and chosen by MiB because they accept nothing but the very best. The campaign, announced back in April, extended to digital ad buys to YouTube, Fandango and other entertainment sites that are popular with moviegoers and included at least one promoted tweet run shortly after launch. It was also featured in a prank video that had car buyers walking into a Lexus dealership only to find an alien hiding inside the manager they were expecting to talk to.

? The NBA, which debuted a series of commercials during broadcasts of the league finals that followed the story of Agents M and H deciding to investigate whether or not basketball players were aliens and continued through interviews with Chris Paul, Russell Westbrook and Anthony Davis.

? Listerine, which offered a free movie ticket with the purchase of two qualifying products. A co-branded commercial promoted that campaign.

? Paul Smith, which launched a capsule collection of fashion items inspired by the movie and its signature look.

? Police Lifestyle, which offered movie-inspired sunglasses similar to those worn by the agents. Online and outdoor ads used the key art of Thompson and Hemsworth posing with sunglasses on and weapons in hand.

A paid Facebook Camera effect allowed users to add one of the movie’s aliens to their videos and photos. Instagram stickers featured characters both alien and human that could be added to Stories.

Sony released a video recapping a fan event held in Bali featuring the cast. During a trip to London, the cast and crew engaged in a Q&A session later released as a video by Sony. There were also appearances elsewhere by members of the cast, including a stop by Thompson at Brazil Comic-Con in December.

Hemsworth and Spider-Man: Far From Home star Tom Holland interviewed each other about their respective films, a video that included lots of references to their roles in Marvel Studios films.

Director F. Gary Gray was honored late last month with a star on the Hollywood Walk of Fame, in a ceremony that included praise from actors he’s worked with in the past, including Vin Diesel, Jamie Foxx and others.

The new cars — including the Lexus RC F — were the focus of a featurette released earlier this week. An exclusive clip was given to Apple TV showing H and M apprehending a couple alien threats.

Snippets of dialogue and sound effects from the film were included in a remix of the theme music from DJ Mike Relm. That video featured Les Twins, who also have a role in the movie. The pair got involved with actively promoting the film by hosting a dance party at Something in the Water in April.

“MiB HQ Chaos” was a casual online game allowing players to explore the group’s base in search of alien artifacts while fending off hostile intruders. A mobile AR game is scheduled to come out that has players taking on the role of a rookie agent responsible for capturing aliens, taking on their weapons and abilities to fight future threats.

The exterior of Carrera Cafe in Los Angeles featured a painting of the worms used by the Men in Black as office help that people could pose in front of. 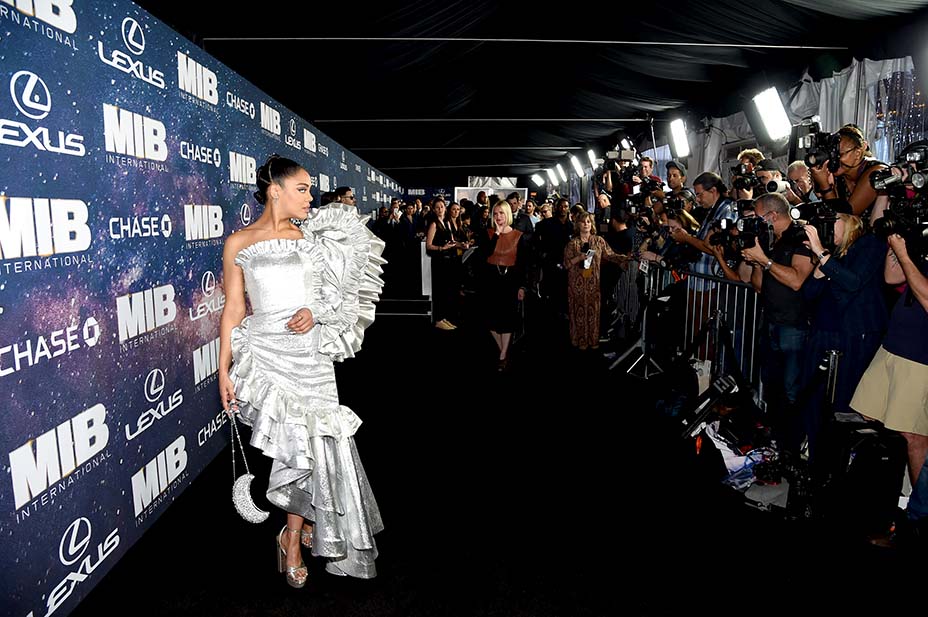 Sony appears to be hoping that by introducing new characters — especially played by actors who are about as popular as they come these days — it can revitalize a franchise that’s over 20 years old. By focusing the campaign on aspects of the actors’ public personas, including Hemsworth’s goofy hunk and Thompson’s self-assured rule breaker, the studio wants to send the message that it’s not just about coming to see the story but also about stars the audience already enjoys.

That story isn’t a big part of the campaign. It’s clear that the action takes place across the globe, but the details are often glossed over in a marketing push that tries hard to bring the series into 2019 but still seems rooted in the late ’90s.

Instead, the focus has been on the chemistry between the two leads, a dynamic that’s very different from the combative relationship between the characters played by Smith and Jones. But the swagger Smith brought to the story, as well as the dark humor from original director Barry Sonnenfeld, were part of what gave the 1997 original such a distinctive feel.

A24 Nabbing Sundance Horror Movie ‘Talk to Me’