Signing on to play Vincent van Gogh in At Eternity’s Gate was a no-brainer for Willem Dafoe. Friends with director Julian Schnabel for 30 years, Dafoe figured that “the idea of a great painter and a great filmmaker making a film about a painter made sense,” he said. “I wanted to be his van Gogh. What can I say?”

Dafoe, 63, who won Venice’s best actor prize when the film premiered there in September, portrays the iconic painter during his time in Arles, France, when he painted some of his greatest works but also suffered from mental illness and cut off part of his ear.

Dafoe, who will be honored at the Gotham Awards with the actor’s tribute, spoke to THR about personalizing van Gogh, which paintings he kept from the set (and which one he wants back) and what he thinks of awards season.

When preparing to play van Gogh, what research did you do?

I read biographies, of course. I had seen Lust for Life and the [Robert] Altman film [Vincent & Theo] years ago. But when you make something, you really want to forget those things. You can’t copy them. It’s the idea that to express what a work of art is you have to make another thing. There are parallels to what you learn in painting: It’s not about likeness.

The film features replicas of many of van Gogh’s paintings. How did that come about?

We had a workshop of people making copies of van Goghs. I’d hang out there and they’d work with me to get me painting and teach me things, how to draw. When we’d come to set in the morning, sometimes Julian would see a painting that was a good copy of van Gogh. But he’d say, “Get my paints,” and he’d work on them some more. He’d personalize them. He’d make some of the well-known self-portraits look more like me. You might think, “Oh that’s a betrayal of van Gogh,” but the best way you can honor him is in spirit. What you want is a living painting, not a museum piece. 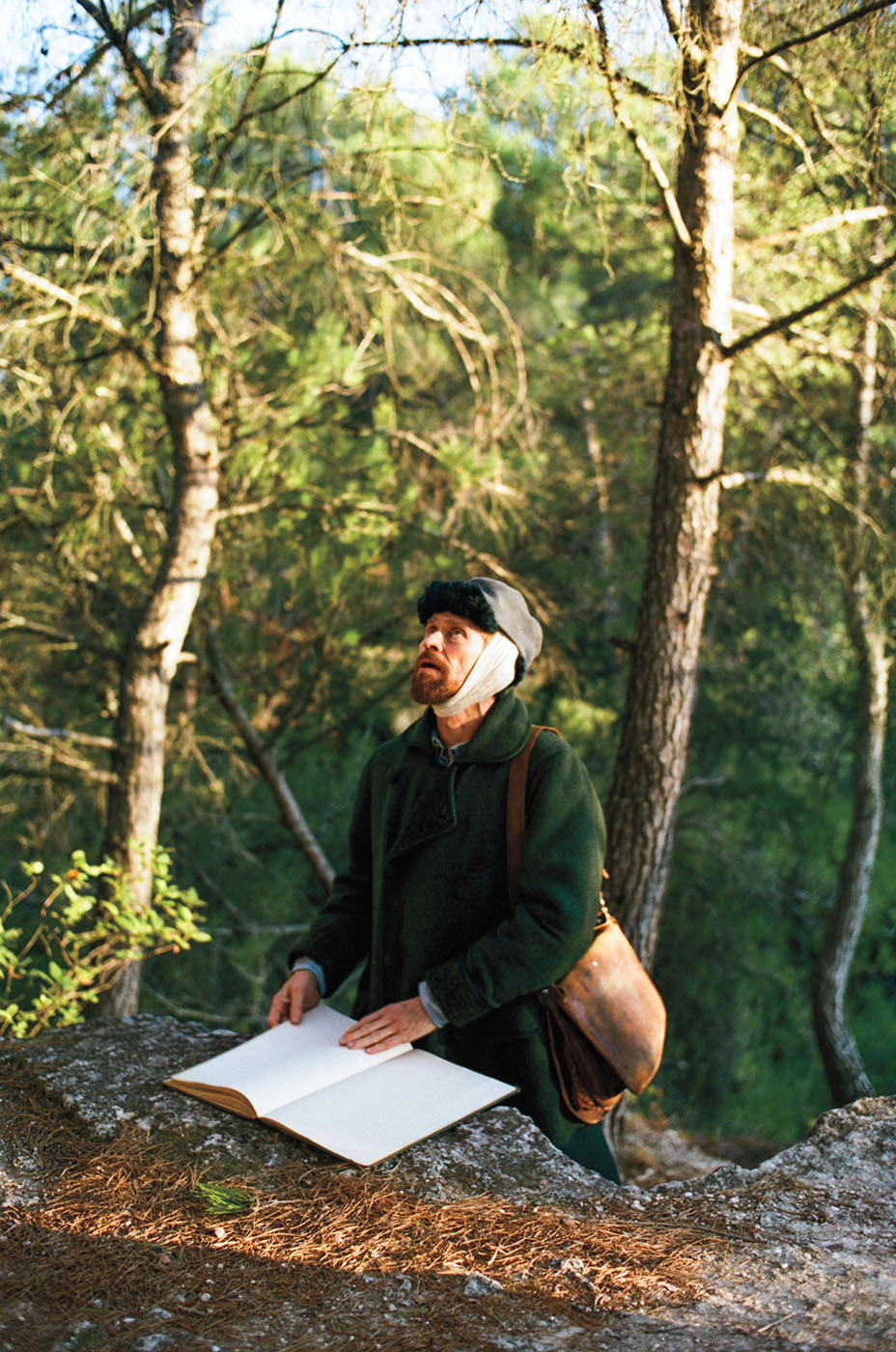 Did you keep any of the paintings?

I kept some, I made some of the paintings in the film. I made Shoes in real time, which was challenging. I don’t know who has that painting; I’d like to have it. There are a couple portraits that Julian made, and I did some work on, that he gave me. He also gave me some of my early landscapes, the first ones that I tried. So I do have some of them. What I’ll do with them I don’t know.

I’d understand why you’d take the portraits of yourself.

Well, he gave them to me. I don’t allow portraits of myself in my house. It’s that thing about being an actor: I don’t approve.

How helpful was it to shoot on-location in France?

Fantastic. You go in some of those landscapes and they’re unchanged. You can actually see what he saw, and that brings you very close in your imagination to who he is because you’re literally taking the same point of view. In real, tangible ways you’re seeing the same light, the same contours, the same colors that he was seeing. It gives you a more personal relationship. This could not be shot anyplace else.

Did anything you learned about him surprise you?

How steeped he was in a spiritual quest, which is usually short-handed as a kind of madness. He tried to be a man of God early in his life, so that was surprising to what extent he was always having a dialogue with his God through nature. For someone that was so socially awkward and had so much trouble communicating with people on a social level and famously had trouble with women, had trouble with physicality, intimacy, he was a very compassionate person. He felt distance from people, but he loved the soul of the worker. He talks much about how you have to live like a peasant to paint peasants.

Right, that’s a lot of his earlier paintings.

He identified with service and he identified with a kind of practical application of evocation toward service. He had a sweetness that isn’t often something that we associate with him. I think one of the pleasures of working on this was, so much of what happens in the movie is there is an excellency there. He is in the groove. He talks about not thinking when he paints, like it’s a meditation. He is in communication with something. He sees something that makes him feel of service and he wants to share that. That kind of generosity, that kind of need for connection is something that I didn’t normally associate with him before we worked on this.

Was there much improvisation during shooting?

We were working with a very strong script. Often, we’d finish working early in the day. We’d still have light, so we’d go out in nature and paint or walk. Going out into nature was pure improvisation. I felt most in contact with him when we got to nature. Sometimes Julian would send Benoît Delhomme, the DP, out with me and we’d just shoot stuff. It was a very good way to work.

What do you hope van Gogh would think of the movie?

I can’t even think about that. Who knows? We would like to think that he’d enjoy it. (Laughs.) That’s something I would have to ruminate on for a long time. But, it’s a movie. We’re making it for now. We’re making it for us. Van Gogh is a very important, influential figure to Julian. The film does a service to him in the respect that it doesn’t try to explain him. It’s our imagining of what it might be like to be him.

You’re no stranger to the awards race. What do you like and dislike about that experience?

What I enjoy is the possibility that a personal, beautiful film like this, that on the surface doesn’t seem like it might have the possibility to reach a wide audience, could. With certain films now, distribution is always the problem. Something tells me that people will be interested in this movie and if it gets critical or awards attention, that helps elevate its profile. I don’t like to think about the hard part because then it will get me down.

You also narrated Vox Lux this year. How did that come about?

To be honest, and this is by no way an apology, it was a very last-minute thing. I think [director] Brady [Corbet] had another voice in there and he wasn’t quite happy with it, and at the last minute he had the idea to use me to be the narrator — which in terms of actual work isn’t a huge time commitment. It’s an important tonal element and framing device in the film. It’s a kind of go-between with the audience.

'At Eternity's Gate': 6 of the Film's Stars and Their Real-Life Inspirations

A version of this story first appeared in the Nov. 19 issue of The Hollywood Reporter magazine. To receive the magazine, click here to subscribe.