[This story contains spoilers for Without Remorse.]

Michael B. Jordan’s John Kelly stands shirtless in his prison cell, listening for the footsteps of approaching guards. He tears off a piece of bedding from the cot in his room and wraps it tightly around his hand, making a tight fist, bracing for the fight he knows is coming. He stuffs his orange prison shirt into the sink, turning the water on and letting it overflow onto the floor. He splashes water onto himself, making him harder to get a hold of when the guards inevitably come. When his door is kicked open moments later, John Kelly is ready. His muscled body tenses, and the guards with their batons, shields, and riot gear are no match for the efficient John Kelly who uses the surroundings of his small space and the water on the floor to gain the edge.

No action is wasted; the man is scientific in his propensity for violence. Every movement is a brutal strike. Yet as good as he is, he’s not enjoying himself. It’s not just John Kelly’s physicality that’s apparent on screen. It’s his soulful hurt and anger, the eyes of man who sees the family he’s lost in one, and targets over those who killed them in the other. John Kelly cannot be contained. The same is true for the talents of Michael B. Jordan, who for two decades has captivated audiences with the kind of charisma that can’t be learned or taught, a diligent work effort that has only added to his star power, and an ability to breathe such life into characters that audiences often clamor for more.

This Friday, Tom Clancy’s second most recognizable character in the Ryanverse, after Jack Ryan, takes to the small screen in Amazon Studios’ Tom Clancy’s Without Remorse, loosely based on the 1993 novel of the same name. Those who have been following the adaptations of Clancy’s work for the past thirty years in film, television, and video games, are likely familiar with the character John Kelly, who takes up the alias John Clark and goes on to lead the international counter-terrorist unit Rainbow. Michael B. Jordan is the third actor to take on the role of John Kelly, later John Clark, on film, following Willem Dafoe in Clear and Present Danger (1994), and Liev Schreiber in The Sum of All Fears (2002). Jordan, very obviously, is quite different from the iterations we’ve seen before. He’s no longer playing second fiddle to Jack Ryan, but he’s also younger, and isn’t nearly as shady as the government that’s using him.

Jordan never plays the character as one note, even while eschewing some of the morally compromised elements of those earlier depictions. Even when certain beats suggest a more straightforward reading, Jordan explores the moment and enhances the character. There is an understanding that while the stories surrounding John Clark have also been mysterious and rife with conspiracy, John Kelly doesn’t have to be. Jordan allows us to know Kelly so that even when everything and everyone else is in doubt he remains the film’s source of brutal truth.

Without Remorse, directed by Stefano Sollima and written by Taylor Sheridan and Will Staples, sets Michael B. Jordan up for what has strong potential to be another franchise starrer for the 34-year old actor. Audiences have seen Jordan in action films before, but not in full action-hero mode, complete with heavy artillery, explosive devices, and the knowledge of how to kill a man at least sixty different ways, as seen in Without Remorse. As great as all of that is for action junkies looking to get their heart rates rising without superpowers, the thing that makes Jordan so compelling in the role is his emotional vulnerability. In the same beat as we see Kelly put two slugs in a man’s head we’ll see his eyes brimming with tears over the recognition that no amount of blood will make up for the loss of his family. The scars of Vietnam etched across Clark’s characterization in Clancy novels have been replaced by scars created by a country that “doesn’t love us,” as he pointedly tells Karen Greer (Jodie Turner-Smith), niece of famed Jack Ryan mentor, James Greer. This acknowledgement doesn’t drive the movie, but it does establish a different viewpoint within the Ryanverse, adds another level to Kelly’s feelings of betrayal, and allows this adaptation to set itself apart from the stories President Reagan was so fond of.

Without Remorse fits around Michael B. Jordan and adapts to his presence. He’s not just an actor plugged into the role, but an actor whose very presence requires the film to adapt to him. As much as he’s playing the role, he’s also defining it, making John Kelly entirely his own in the way only the most compelling movie stars can.

The first time I noticed Jordan’s ability to elevate a role was in Chronicle (2012) in which he played the popular high schooler with superpowers, Steve Montgomery. Steve’s death served as a the catalyst for Andrew’s (Dane DeHaan) villainous turn, and for his cousin Matt (Alex Russell) to take him down. But many audiences wondered why it wasn’t Steve who got the hero’s arc in the end. Steve’s death hurt more, but he also proved to be a more compelling character to follow. Similarly, in Black Panther (2018), Jordan portrayed Erik Killmonger as a villain so magnetic and so defined by a point of view that audiences couldn’t help but want to see him live. Three years later and many fans are still hoping for his resurrection in the sequel. Michael B. Jordan creates characters that feel larger than the stories they’re contained to. 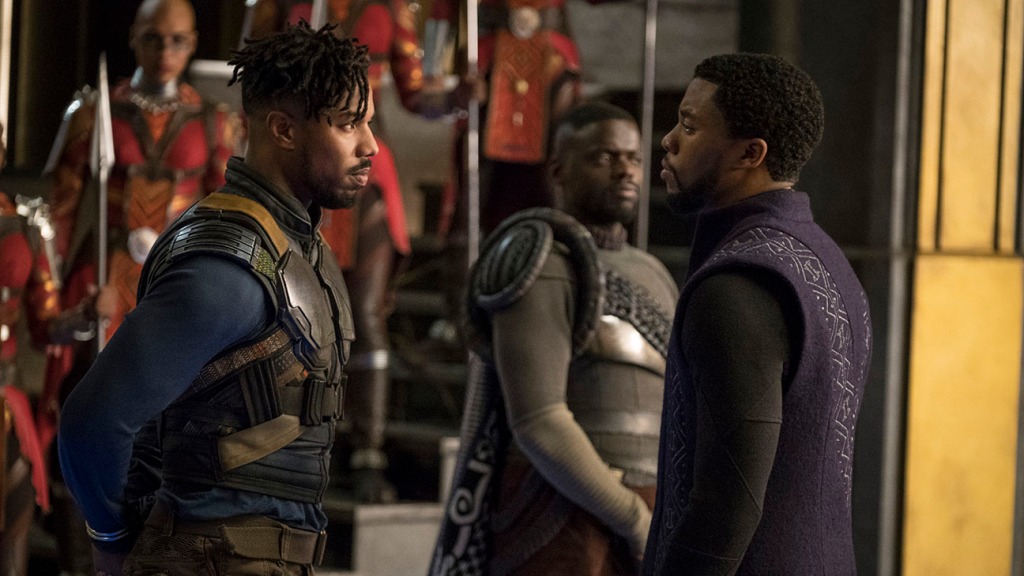 It’s his capacity for emotional honesty that has drawn audiences to Jordan’s roles throughout his career. From a child actor in Hardball (2001) and The Wire (2002), to his more recent roles in Creed (2015) and Black Panther (2018), Jordan has created layered portrayals of Black boyhood and masculinity. There’s a reason why his portrayal of Oscar Grant in Fruitvale Station (2013) is so moving and heartbreaking. It’s not just that he’s playing a real-life tragic figure whose life was stolen from him, but that he offers a glimpse at Grant’s interior life, allowing audiences to latch unto the humanity that headlines can never capture. Michael B. Jordan’s presence demands empathy whether it’s as Adonis Creed shadow boxing his father’s legacy and trying to prove he’s not a mistake, or as Killmonger admitting to the struggles of a little boy from Oakland growing up believing in fairy tales. And with John Kelly, born of the ’80s and its fascination with action heroes as modern cowboys, Michael B. Jordan modernizes the character and gives him a point of view that while refraining from being heavy-handed feels unique even on the well-trod ground of military action heroes.

Michael B. Jordan displays no interest in portraying characters as they would have existed on screen thirty or twenty years ago. He is dismantling stereotypes while keeping his sights set on the future. If we’re lucky, Hollywood will meet him there.