The world ends next month, and only one hero will survive to help humanity navigate what’s left. The four-issue Wonder Woman: Dead Earth is the first DC project by acclaimed writer/artist Daniel Warren Johnson (Extremity, Murder Falcon), and it’s an ambitious arrival that sees Diana wake up in a post-apocalyptic world entirely unfamiliar to her. But there will be a familiar face or two waiting around the corner — with the weight of what remains of the world on her shoulders.

Ahead of the first issue’s release in mid-December, Heat Vision talked to Johnson about the series, his influences and why Wonder Woman is the best choice to lead humanity out of dystopia, with an exclusive preview of the first issue — including Johnson’s variant cover for the first issue.

This is definitely not the traditional take on Wonder Woman or what people will expect from a Wonder Woman story, which makes for an obvious first question: What is it about Wonder Woman that appealed to you for this project?

My relationship with DC started when they offered me a shot at a Black Label title, specifically asking for my take on an A-list DC character. After thinking about it for a few weeks, I knew that I wanted to try something different than I was used to. All-Star Superman is one of my favorite comics of all time, along with The Dark Knight Returns, and I didn’t feel like I had anything else to add to the worlds of Batman and Superman — at least not yet!

That being said, I never really had an interest in reading Wonder Woman. I knew that I liked what she stood for and her unique view of the world, but the visual representation of the character never really connected with me. But the more I thought about it, it became a fun challenge. Could I make a Wonder Woman comic that I would be willing to buy? Then, as I began to do more research on her, I began to see more depth and interesting conflicts that I believed I could explore in a fun and dynamic way, all while doing it in my style of storytelling.

What you see in Dead Earth is me exploring those concepts, and doing my best to make Diana as approachable and relatable as possible. That’s ultimately why I chose to work with her: She has a grace about her that I feel is unique, and has a completely different perspective than that of the other DC heroes. She is ready and willing to be different, and I can’t wait to explore that here.

As the first issue establishes, Diana is, as far as it appears, the only hero to survive the apocalyptic event that created the dead Earth of the series’ title, and one of the few characters in the entire issue to maintain some semblance of… civilization, perhaps, or morality, beyond simple survival. There’s always been an element of her being Other to the world she’s been in, and that’s only amplified here. Was this part of your plan in putting her in this post-apocalyptic world? It really engages both the “Amazon” and “Princess” side of her.

Yes! I’m glad you picked up on that. I feel that with a lot of superhero titles, the core differences of each individual sometimes get lost in the crazy of having multiple god-like beings existing in a 22-page comic.

With Dead Earth, I knew that I had a chance to separate Diana from the DC universe, and especially with the larger page count, could really get into her head and see how she thinks about things. From the beginning, I wanted her to be on her back foot, trying to figure things out while witnessing just how far humanity has fallen. But even so, her first actions are to try and bring some healing to a broken world, but that world isn’t necessarily ready to accept it.

There’s a lovely moment midway through the first issue where Wonder Woman talks about loving those who’ve betrayed her and the importance of love. It’s not only a great character beat, but it feels like something that really defines who Diana is to you, and instantly zeroes in on the character’s appeal. Is Diana the peacemaker as important to you as the more familiar warrior?

To me, her peacemaking is more important than her warrior abilities. She desires justice for every being, and she has the power to enforce it, or at least she used to. Something that interests me about today’s world is a lot of our morality is based on the kind of environment we live in: Would we be as ready to help someone if it truly comes at an expense of our own? I feel that it’s easy to say yes, but in action we as humans have failed in this time and time again — I know I have — and that is on full display in the humans that we meet in this story.

What I love about Diana is she is a god and she doesn’t have to worry about being hurt by a violent human, and because of that, she has more agency to safely make peace on behalf of humanity. But what happens when Diana’s powers are lowered significantly? When she is more vulnerable physically, it affects her spiritual way of thinking as well. Both will be tested in Dead Earth.

Am I entirely misreading, or are there purposeful callbacks to Greek myths in this story? Not just the hydra/Haedra name parallel, but there feels something mythical and literally Herculean about Diana’s trials as we see them.

To be totally honest, the Haedra name was a happy accident in relation to Hydra! I was just trying to find cool names for beasts that haven’t already been used. But I agree with you, looking back on issue one, it feels like a god alone, unsure of her steps, trying to find her way in a new world, which feels like an old myth in some way. I also did my best to research the visuals of Greek art, and use the influence to help tell a backstory with the actual pieces of art the characters look at in the book.

What are the influences on the story? I could see connections to Kirby’s Kamandi, arguably to Mad Max: Fury Road, to earlier Wonder Woman stories as well, but what is actually there in your working for the story?

Quite a few things, I think. I definitely was calling more on the Kamandi influence than that of Mad Max, as the Kirby approach to a post-apocalyptic world feels a little more organic to me, and that’s definitely what I was going for here. I also was calling on small things in the original creation of Wonder Woman, and trying to put a completely different spin on the word “submission.”

Something else that will always influence my work is Miyazaki’s Nausicaa, Valley of the Wind manga. It still amazes me just how much emotion he can fit in just a handful of panels, and that’s something I try to emulate, no matter what project I work on.

There’s a wonderful kinetic feel to the issue, and one that mirrors the readers’ — and Diana’s — experience: Everything is continually happening, the issue really moves and feels off-kilter in a way that keeps everyone on their toes, which gives the quiet moments even more weight when they happen. Your art has always been great at showing momentum and movement; is this something that you find yourself writing towards on a project like this?

Oh definitely. I love telling stories that have dynamic action, partly because it helps sell the world that I’m asking the readers to step into, and partly because it’s fun to draw! That being said, I don’t purposefully write for the action scenes. All my thought goes into the character moments, and how to find the most powerful way to show my readers what a character is feeling, hopefully while using as few words as possible.

After that is done, which usually turns out to be the finished script, I go into thumbnailing and planning out the visual aspect of the story, which is where I can take the time to plan out the action scenes. I can do this with confidence, because I know for a fact the story elements and character beats are there, so I’m free to focus on dynamism and making a scene feel as exciting and fresh as possible.

Along similar lines, what was it like working in the larger-scale page size of DC’s larger Premium Plus format? Your art feels more expansive than I’ve seen it before; it feels like you’re really taking advantage of the format.

It was definitely a challenge at first! I remember needing to adjust my page layouts simply because I was having trouble figuring out just how much I could fit on a page. But as I’ve spent time in the format, I’ve learned to love it.

There’s a freedom to the square-ish way the panels form, and it leaves a lot of room to explore settings and pacing. Now that I’m used to this size, working on the more traditional comic size is a challenge! I’m super excited to see this book in print, I think it’s going to look really good. Also, I have to plug Mike Spicer [colorist on the project] and Rus Wooton [letterer] here. They’re really bringing this book to the next level, just as they did on my previous titles, Extremity and Murder Falcon. I can’t wait for readers to check out their amazing work.

What should readers expect from the series as it moves forward? The first issue, by itself, is surprising and pushes back on expectations the reader might have from the issue’s promotion. Are there more surprises to come — and if so, are there teases you’re comfortable sharing…?

I can’t say much, so let’s just say I’m diving into the deepest part of what drives Wonder Woman, and that takes her to some dark places, places we haven’t necessarily seen from Diana before. I’m doing my very best to do justice to what the character stands for, and I hope readers will join me on the journey. 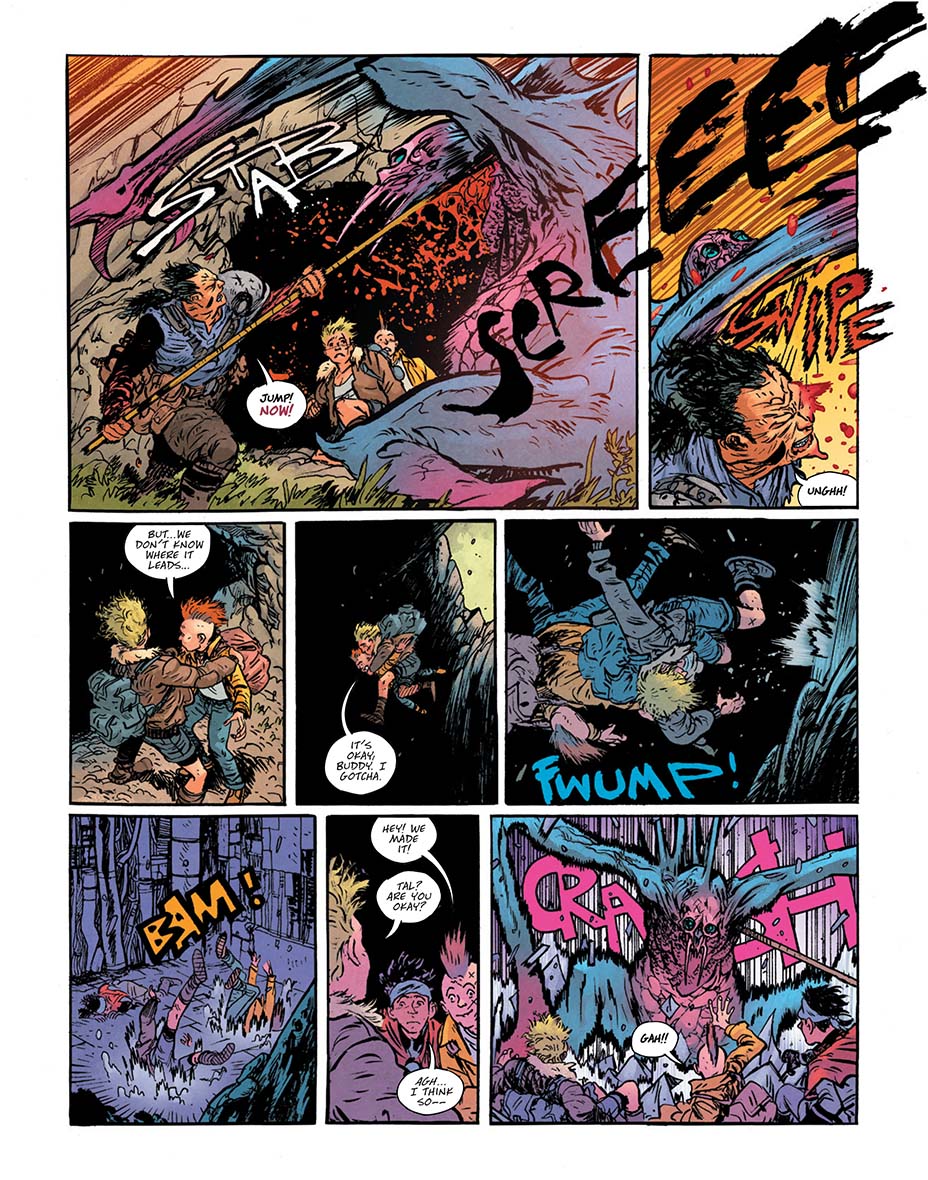 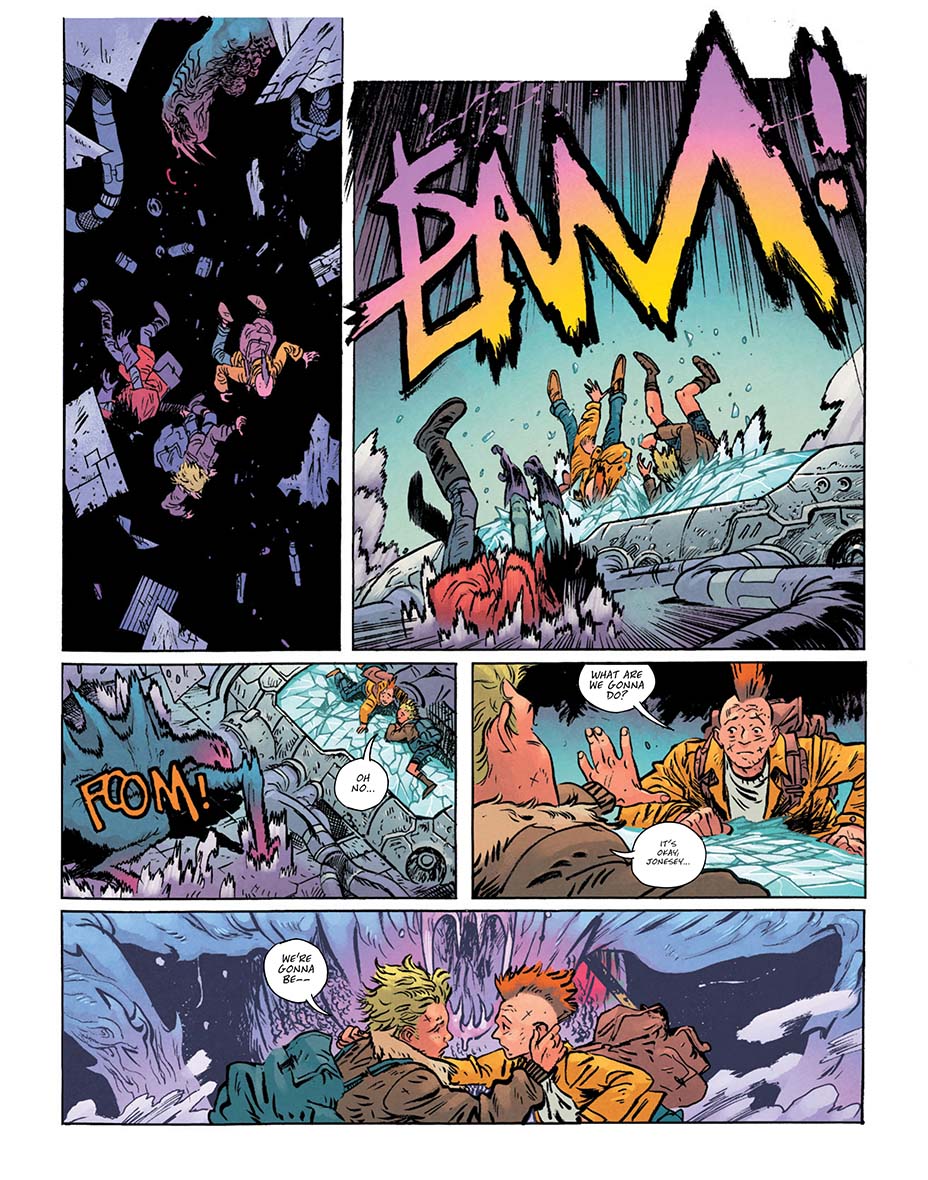 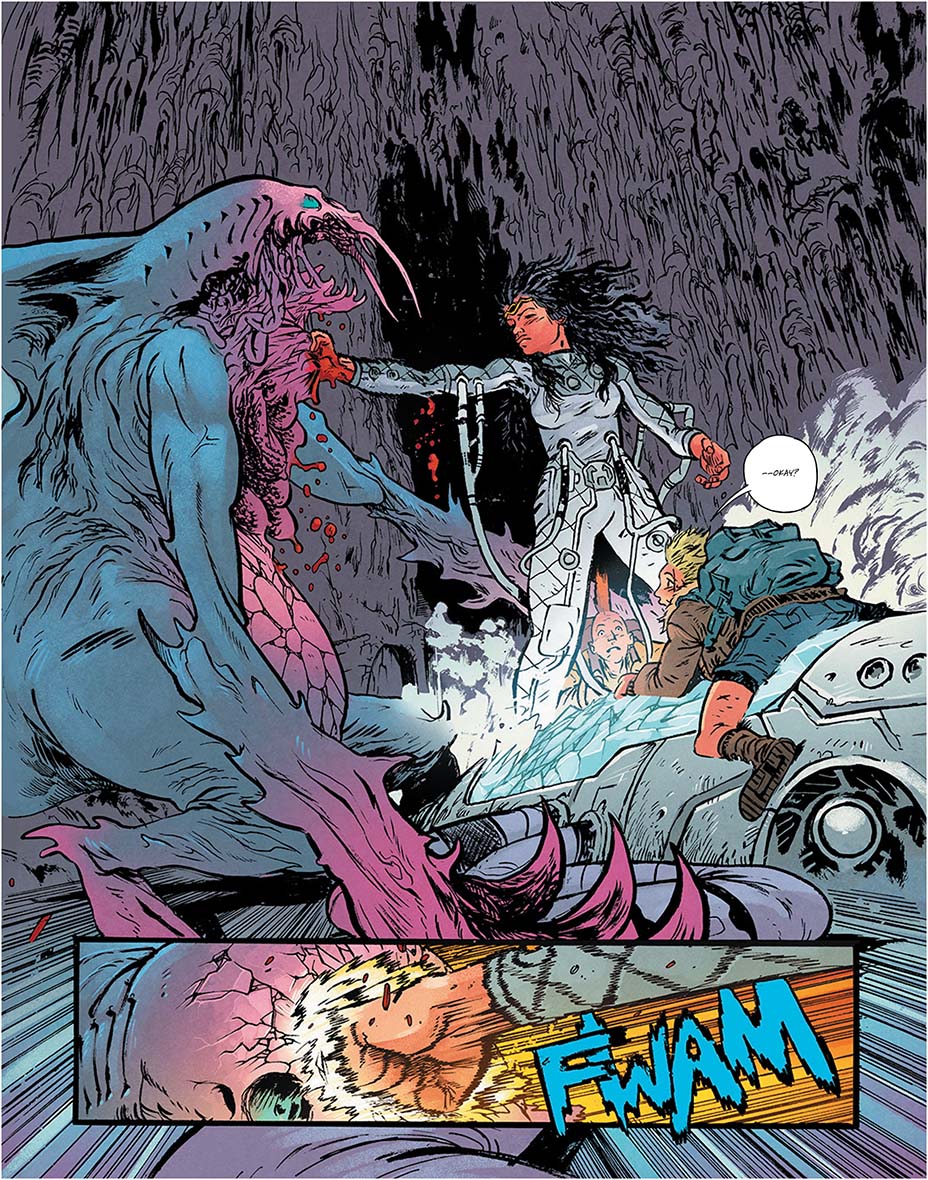 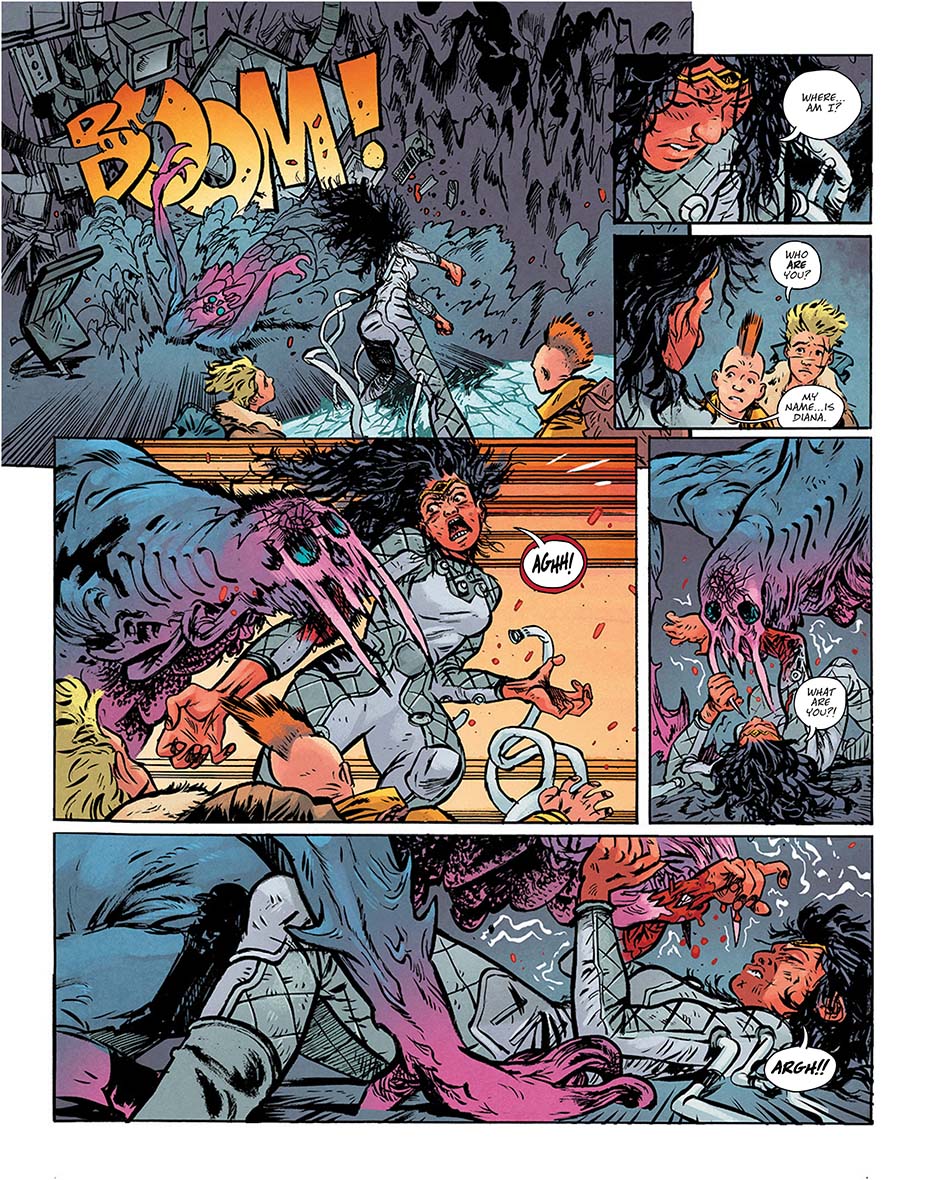 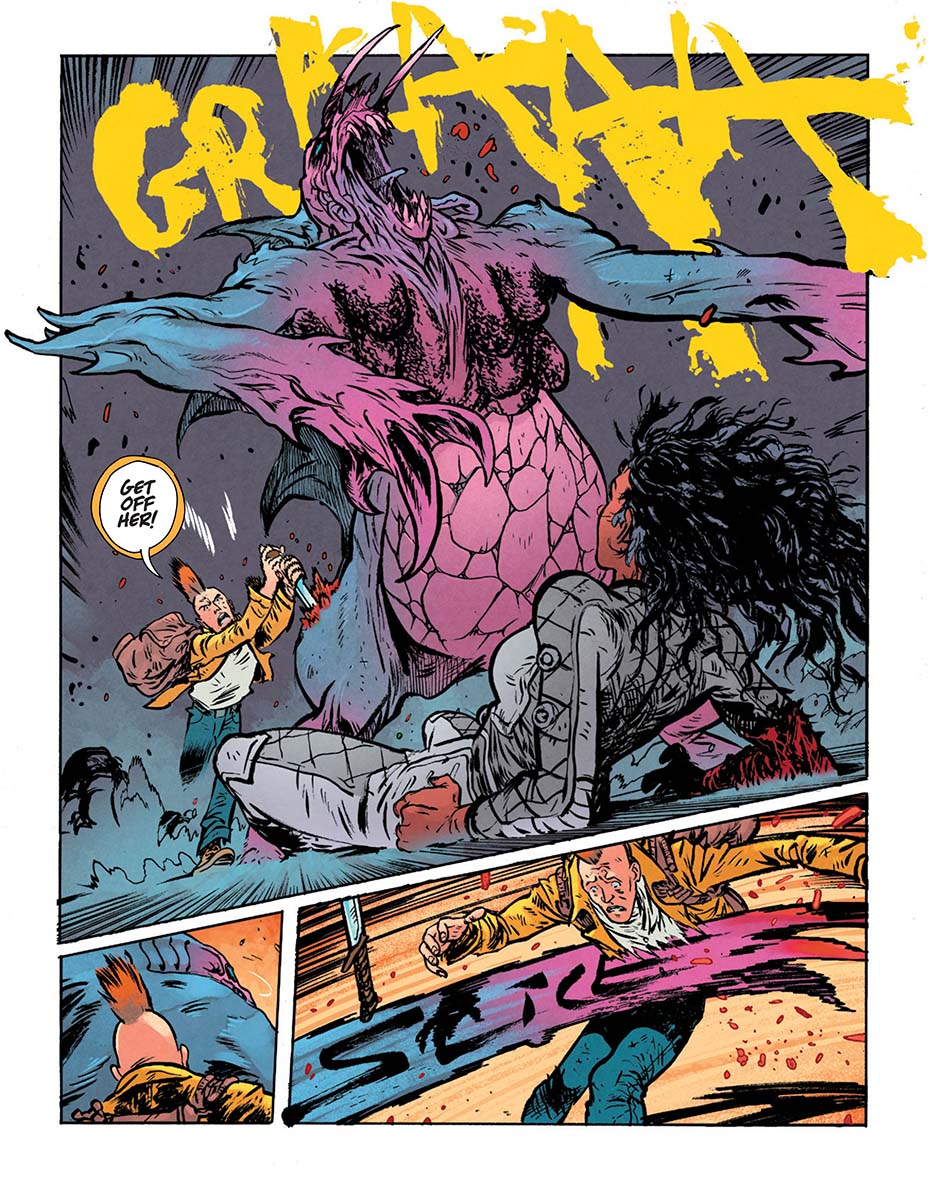 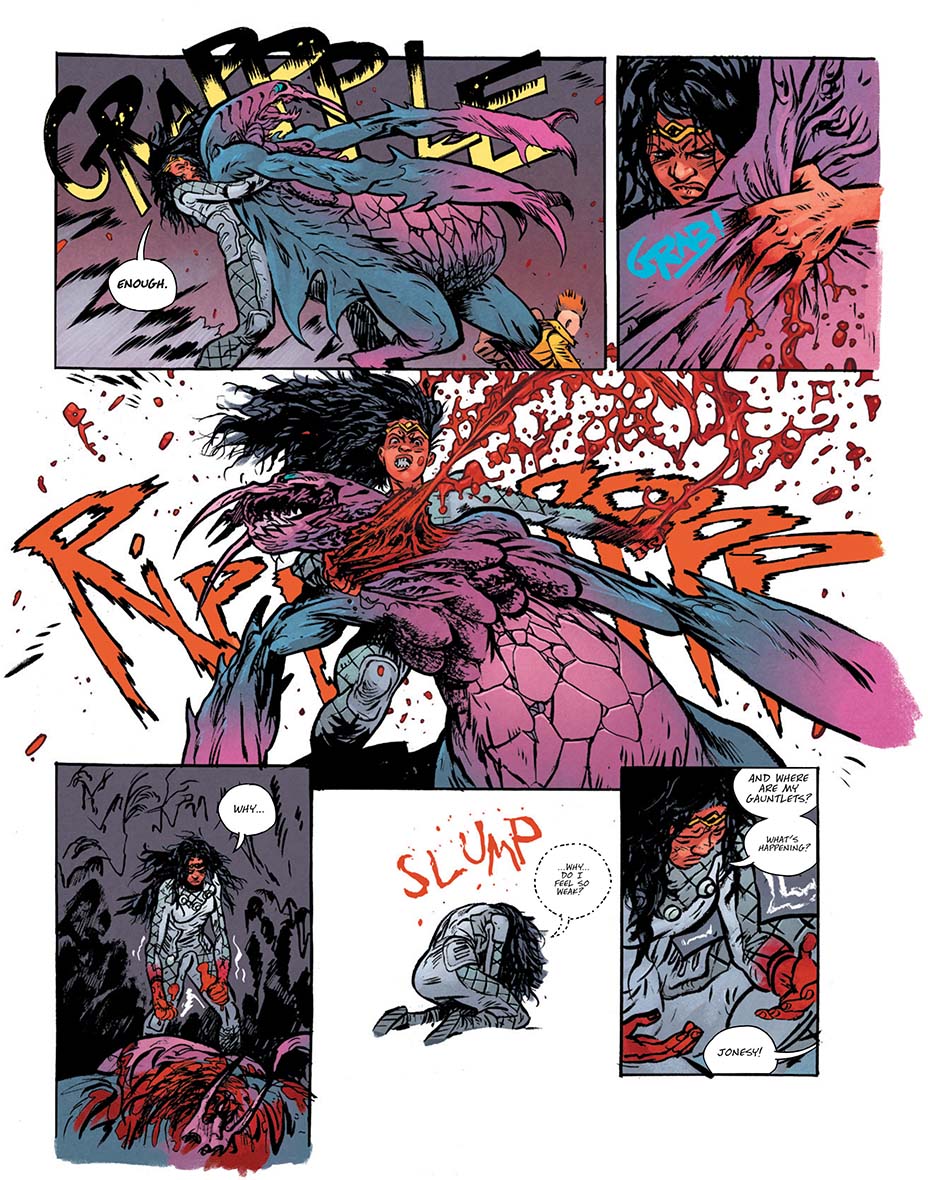 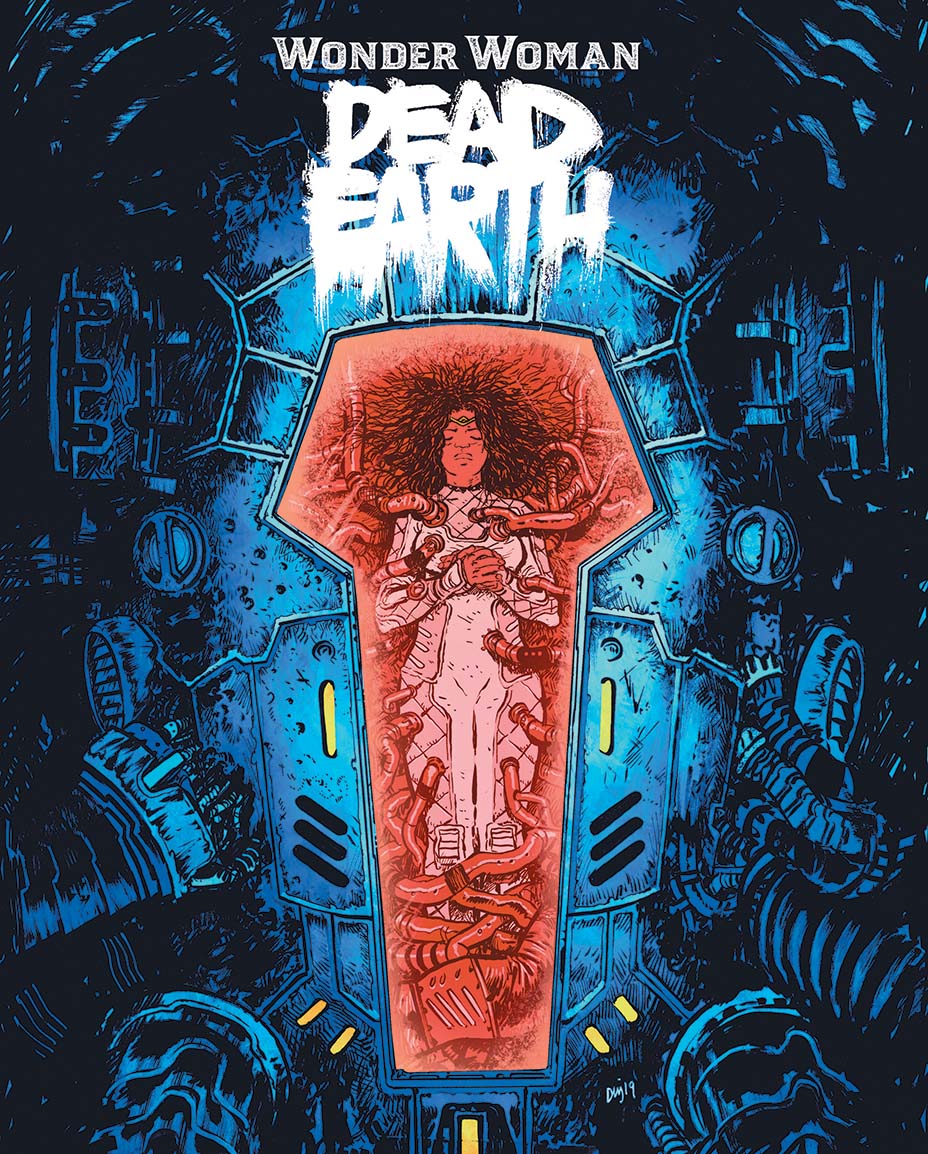