In the late ’90s, he was making ends meet as a struggling actor by answering phones for friend Bryan Singer, who was deep in pre-production on Fox’s X-Men movie. But Hayter was not just any other artist struggling to make it in Hollywood — he also happened to be a die-hard X-Men fan, and as pre-production ramped up, Singer leaned on him more and more for his comic book expertise and story ideas. A few short months later, he found himself on the film’s Toronto set as its sole screenwriter.

The film would go on to become a hit. It’s credited with launching the modern age of superhero movies as well as making Hugh Jackman a star. With Jackman’s 17-year tenure as the character coming to an end with Logan, Hayter spoke with Heat Vision about the actor’s unlikely casting (which involved Tom Cruise and a secret mission to Australia), his lost pitch for 2006’s X-Men: The Last Stand, and all those stars (Michael Jackson! Shaq!) who wanted to join the X-Men universe.

You went from answering phones to writing a big-budget movie. Did you have time to reflect on how much pressure that was?

They gave me plenty of time to consider the pressure, because the fact that I was working on an $80 million movie at Fox as my first writing job caused some consternation among the upper ranks. Everybody made it clear to me what was at stake and the various ways I would be destroyed if we didn’t pull it off.

You were on set for months should rewrites be needed. What were some of the things you had to tweak?

Everything was up for grabs. The way that Bryan works is he is constantly on the lookout for anything that doesn’t work. Any false note. He has an exceptional bullshit detector, and that does not stop even in the middle of a scene. I was asked to look at everything. And specifically asked under Bryan’s direction to change things constantly, which was a little concerning for the studio executives. And sometimes it would come to the point where he’d ask me for a line, I’d whisper it in his ear and he’d call it out to the actors on set. It was really incredible.

Who did you have pictured in your mind when you were writing the script? Was Patrick Stewart or anyone else attached at the time?

I was writing it for the comic book characters. I was brought on as they were casting, so I was lucky enough to be there for some of the people who came in like Terence Stamp for Xavier and Janet Jackson and Mariah Carey for Storm. Michael Jackson came in because he wanted to play Professor X. It was amazing. Shaq came in. Viggo Mortensen came in. I really liked Viggo for Wolverine, but it didn’t come together for whatever reason. Angela Bassett was our first choice for Storm, but her agents wanted more money than we had at the time. Same with Rachael Leigh Cook for Rogue.

He’s got the big M scar over his face [Bishop, later played by Omar Sy in 2014’s Days of Future Past]. Because I didn’t know the character, it didn’t end up in the script. But I did walk past an office one day and there he was and much larger than life. Glenn Danzig came in for Wolverine, because he’s a Wolverine fanatic. And because I was answering phones right at the front, people would come right through where my office was. 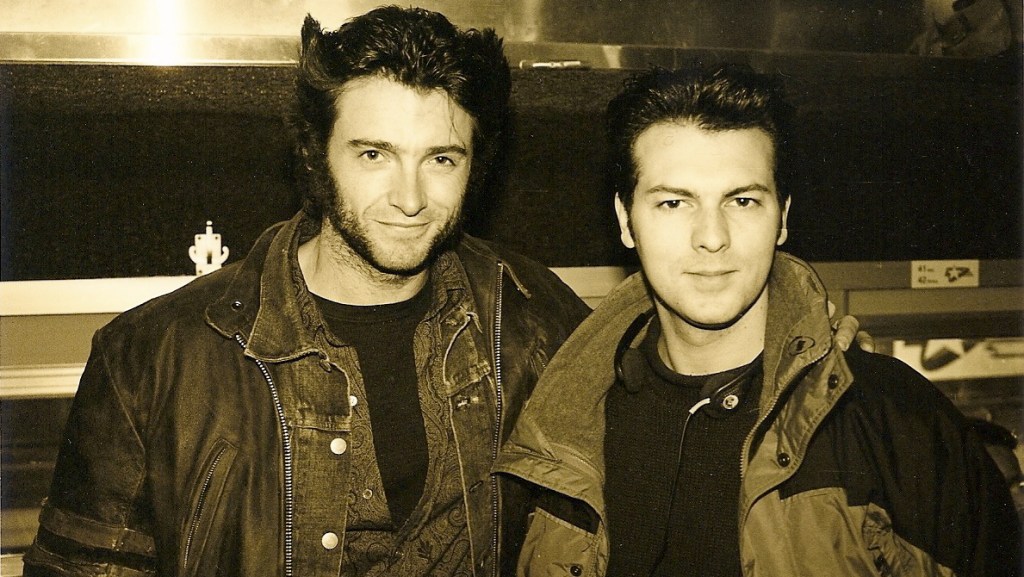 [Then-Fox executive] Tom Rothman really wanted Dougray Scott to play Wolverine and he was shooting Mission: Impossible 2 and Tom Cruise kept calling Byran and saying, “We just need him a little while longer, a little while longer.” We were starting to shoot and Wolverine was the lead and we didn’t have him. Bryan suspected something was hinky, and so he sent the costume designer down to Australia, ostensibly to get wardrobe shots, but really it was to find out what was going on. What we found out was Dougray had been in a motorcycle accident filming the climax of MI2. He was pretty messed up. It was a real shame he couldn’t do it. And Hugh had been somebody who had been in the mix earlier and it was [executive producer] Lauren Shuler Donner who said, “Why don’t we bring him?”

How did you decide Wolverine would be the star of the piece even more so than Xavier or Magneto?

He is the fulcrum of X-Men. The earlier X-Men group was a brilliant creation of Stan Lee’s, but when Len Wein created Wolverine and they brought him into the X-Men, it was the perfect fulcrum between Professor X’s philosophy and Magneto’s philosophy. The fact that the wasn’t bound by either gave him such a wild, attractive freedom that it was obvious that was the character that the series needed to revolve around. It was originally supposed to be Mel Gibson. Back when I got hired all of our concept art was Mel Gibson.

People have noted Hugh’s Wolverine is nicer than in the comics. Is that how you envisioned him?

I wrote him with elements of my personality, which there are certainly elements that are a lot nastier than Hugh’s, and there are elements of Bryan’s personality, which can be rough around the edges as well. And actually I said to Bryan one day, “We’re going to have the nicest Wolverine in film history.” And it was a bit of a concern. Hugh is just a love. He is so sweet. Bryan, he yelled at Hugh one day and was like, “You need to be edgier. You need to be meaner, you need to be tougher. You need to go home and get into a fight with your wife. Have a screaming match with your wife!” And Hugh said, “Bryan, if I went home and got in a fight like that with Deb, I’d come in crying!” We were like, “Oh no, we’re all dead.”

We wrote him very tough. Very edgy, and then Hugh brought his humanity to it. In the end, there’s a core of steel there he brought to it that made it into a full person. Wolverine could be a caricature. He could be a growling asshole, really. I think it was the balance. 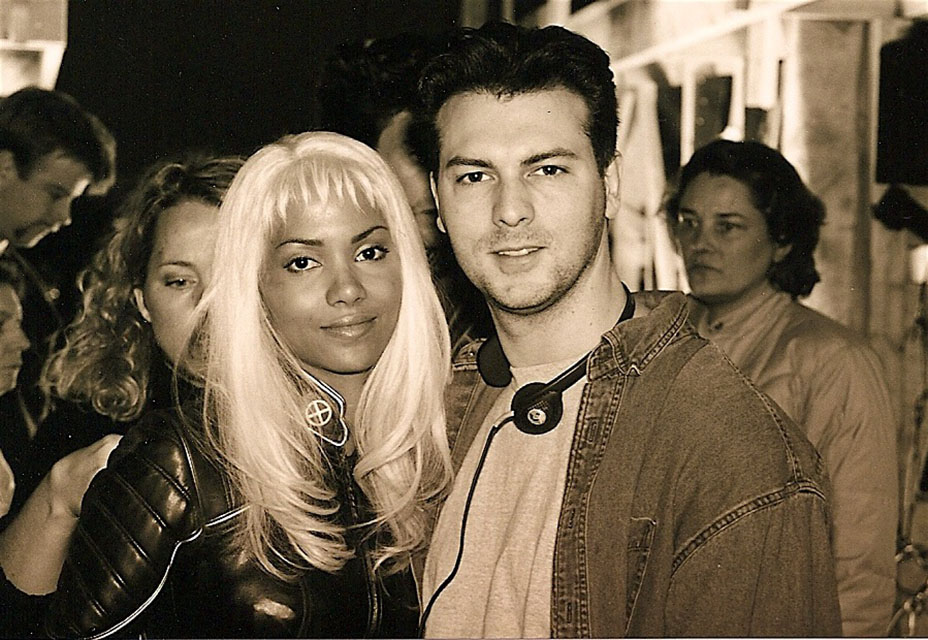 Some fans complained Storm wasn’t given her due in the first X-Men movie, and then became better over time. Did you pay attention to those concerns and how did that happen that she was given more to do in X2?

That was a conversation with the studio, because Halle won her Oscar [for 2001’s Monster’s Ball] between the first and second movies. I’m a huge fan of Storm and I’m a huge fan of Halle Berry as that character. But in that first movie, it’s not Storm’s movie. It’s a double love triangle between Wolverine, Jean and Cyclops; and Wolverine, Rogue and Bobby. Those are the operative relationships and unfortunately because we had 11 main characters, there’s only so much screenplay real estate you can dedicate to each. I think Storm did get short shrift in the first film, but because of her Oscar and because she’s awesome, we all — the studio, Bryan, myself and Marvel — said she has to play a stronger role and because she is a really interesting character philosophically and her powers are great — and she’s Halle Berry. 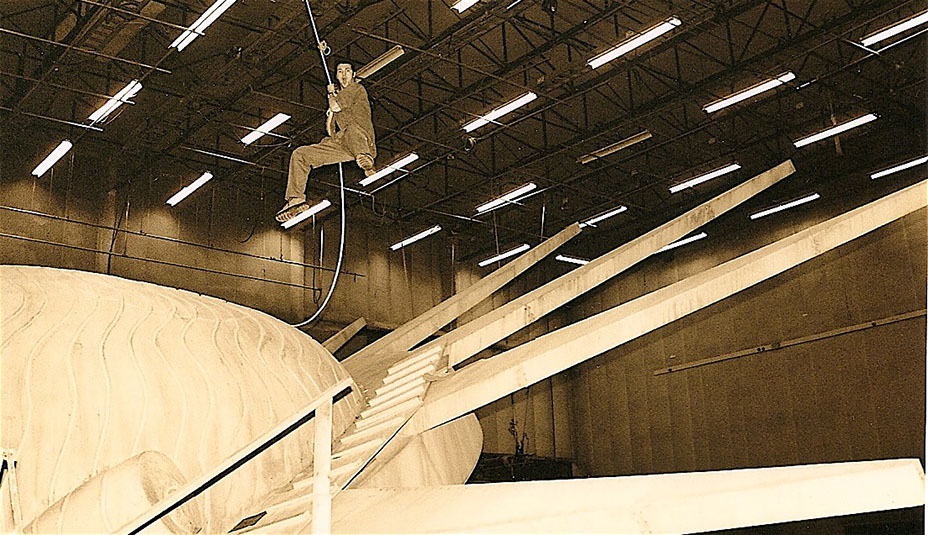 Bryan and I had discussed 3 — and there’s actually a few moments in X-Men 1 that were meant to pay off in X-Men 3. Some Dark Phoenix hints and things like that. We were discussing the third movie as we were putting together the second movie. But Bryan went to direct Superman Returns and then was off the project and nobody asked me to come without Bryan.

Can you share what you would have done with X-Men 3?

The image that I wanted for X-Men 3 trailer was essentially, you see Xavier and Logan facing off against Jean and her eyes are on fire and she’s become the Dark Phoenix and they are talking about the war between humans and mutants and she says something along the lines of, “Don’t worry, I’ll put an end to it.” And then we cut to this statue of Iwo Jima in Washington, as the sun is coming up, but it’s still twilight and purple, and you see a flare of orange and it melts away. She fires through, on fire and blasts right through it. You see the Capitol Building and she flies up to the White House and lands into the middle of the street. We cut opposite and we see the entire army arrayed against her. She’s like “Come on!” and we cut to black.

I went up to set on X-Men 3. I met [director] Brett Ratner there. They said, ‘This is David Hayter,” and he was like, “Oh my God, we need you on this!” I was like, “I bet!” It was the day with the big sentinel head and Hugh in the training room.

Check out more of Hayter’s behind-the-scenes photos (including Marvel Studios chief Kevin Feige back in his assistant days) below: 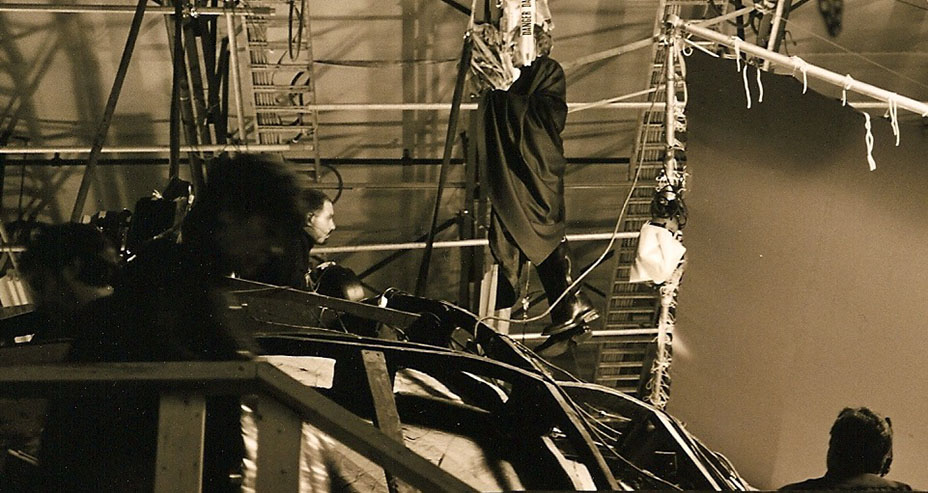 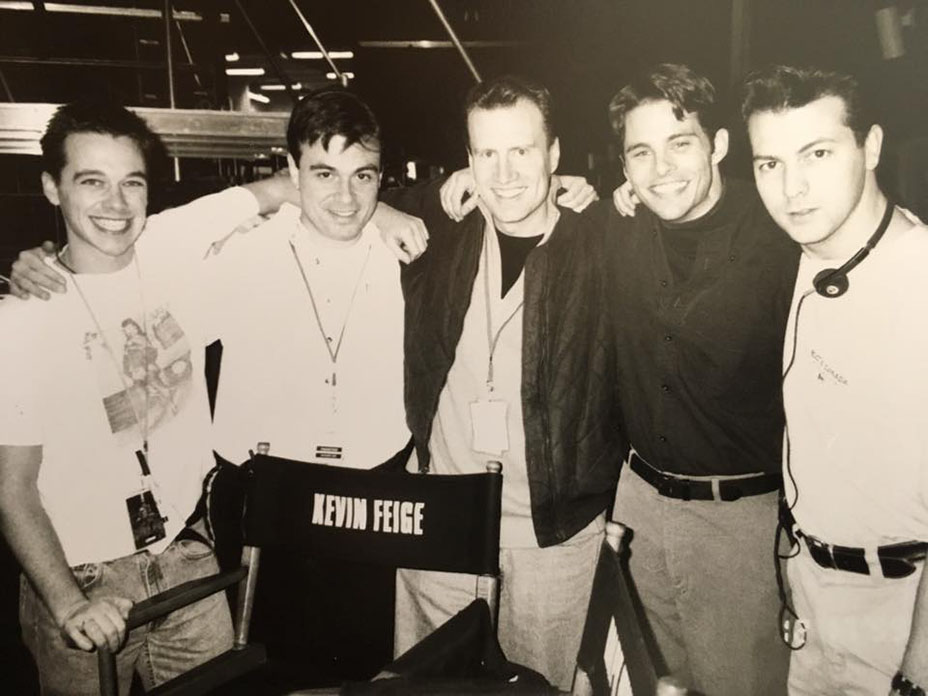 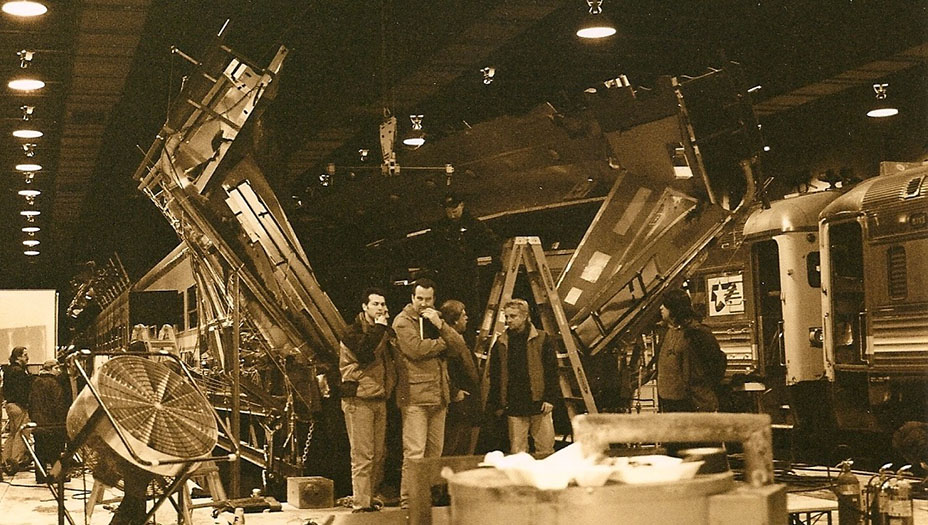 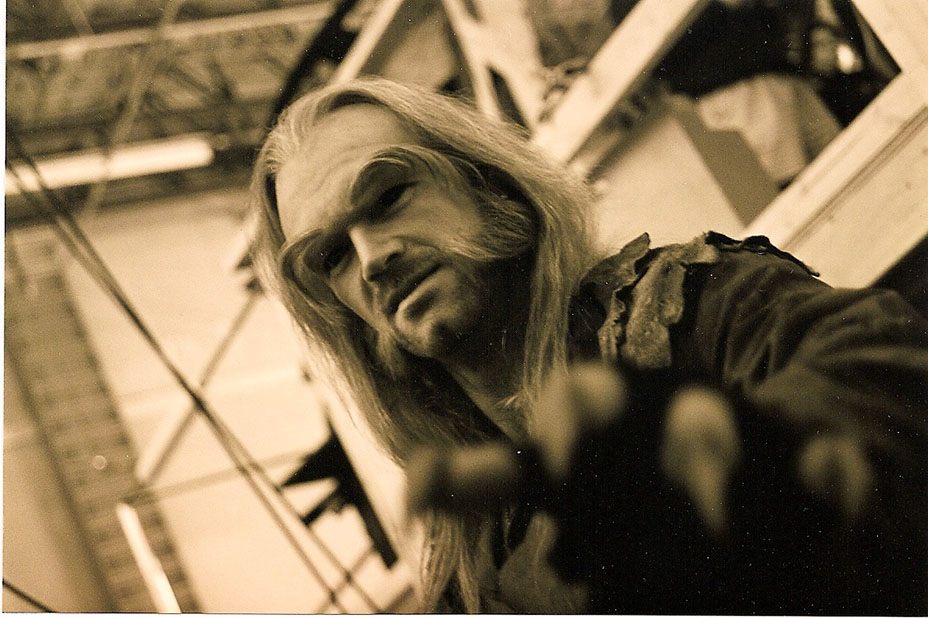 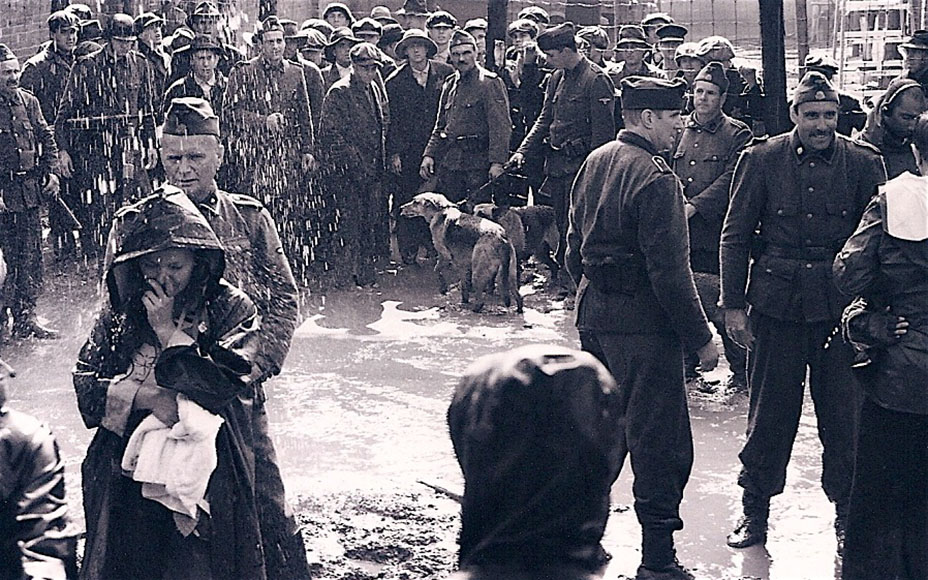 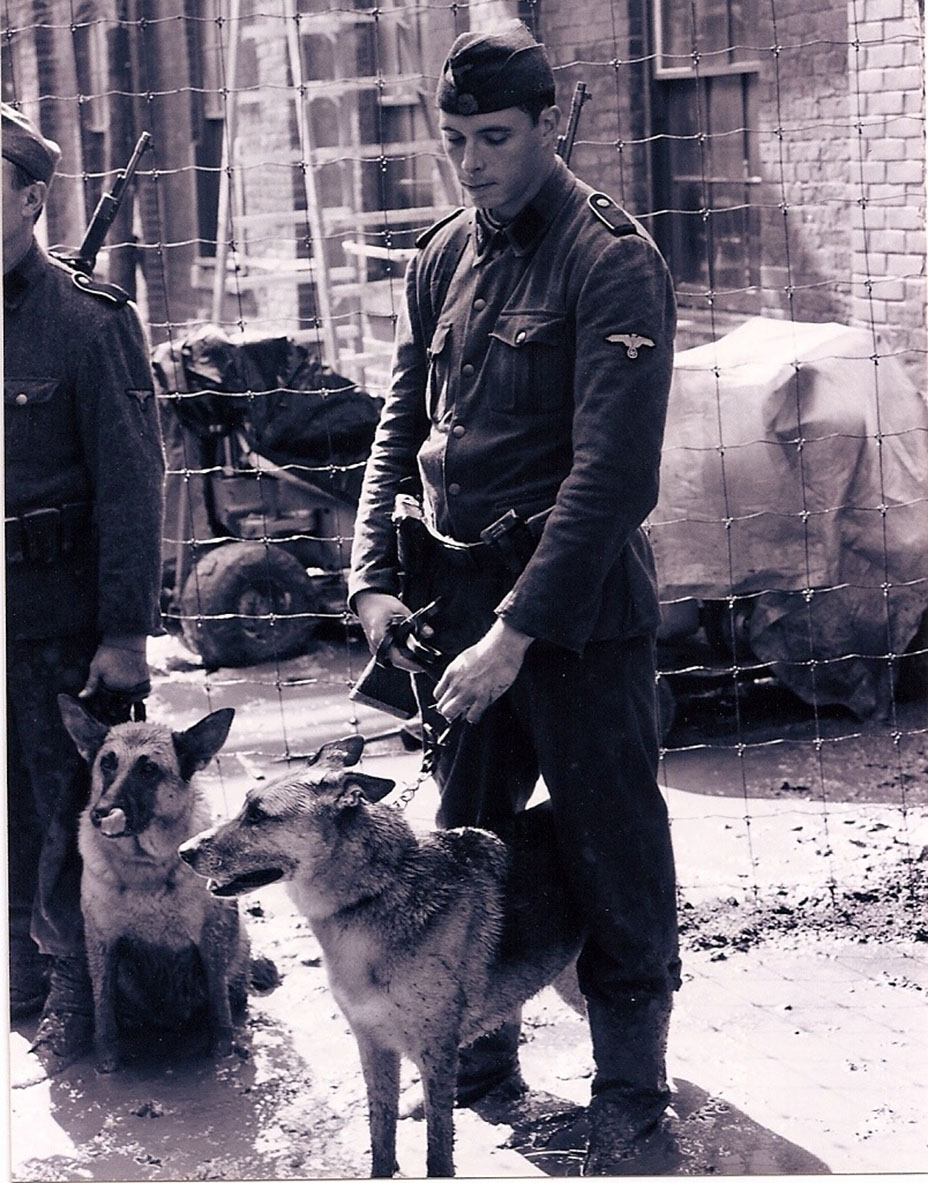 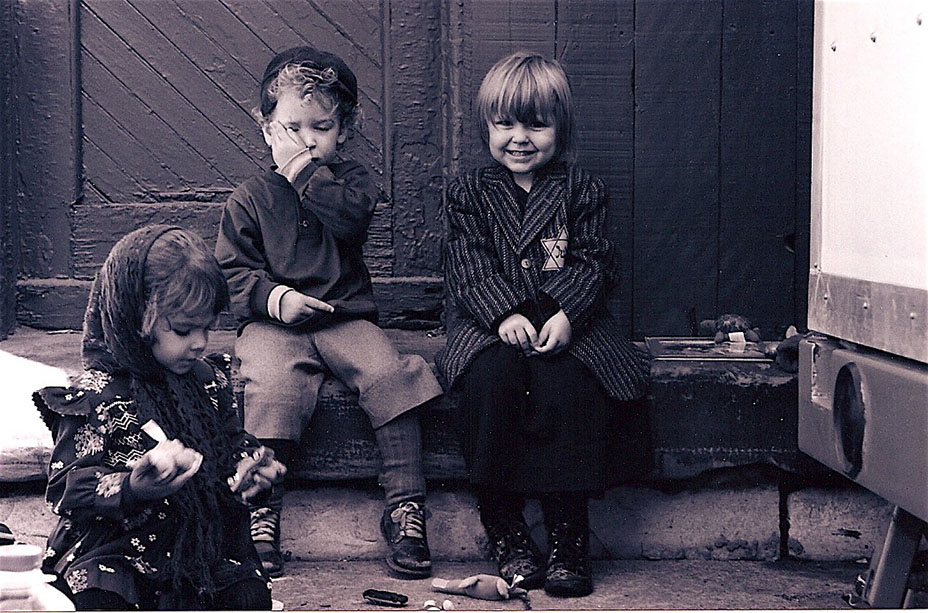 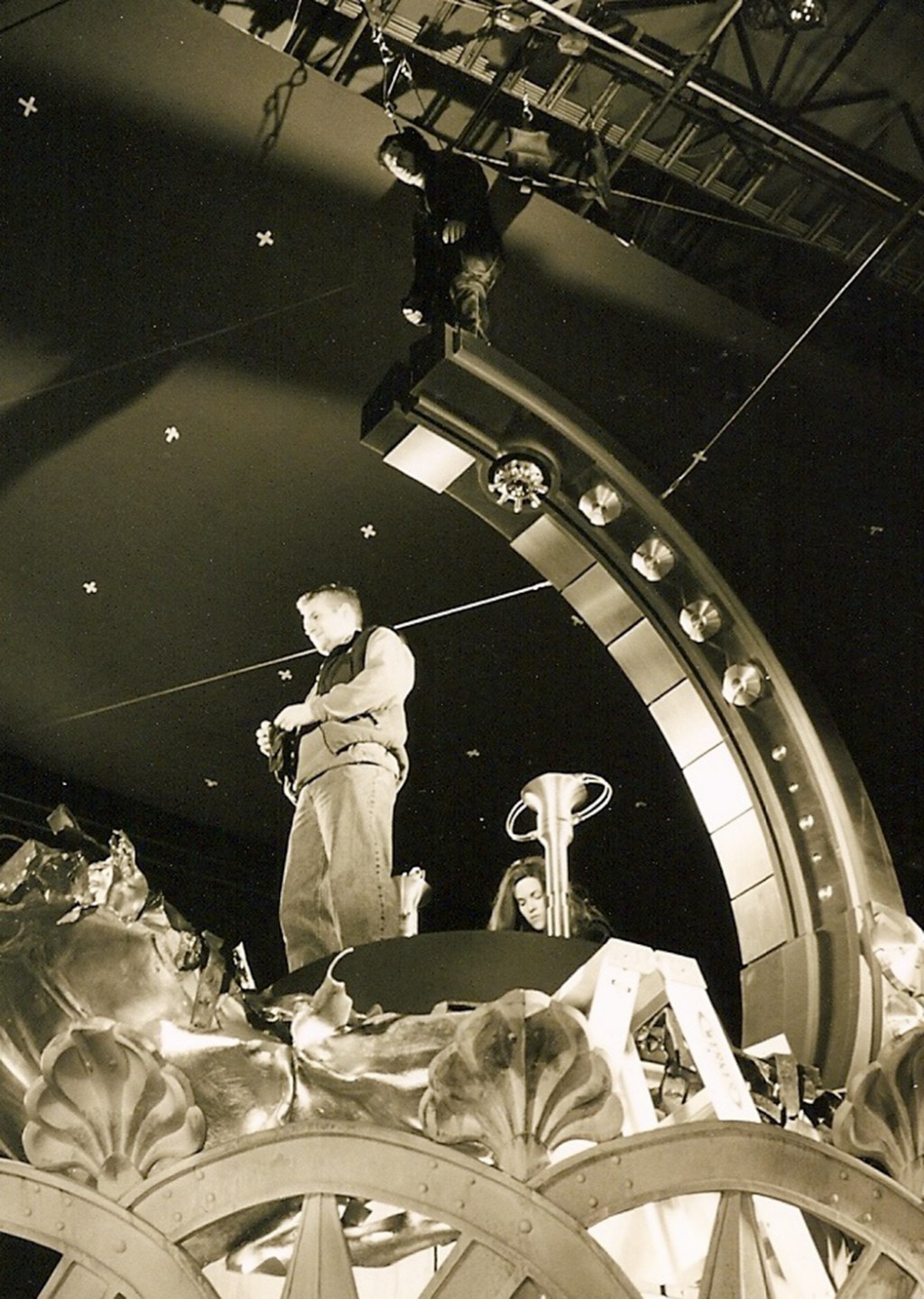 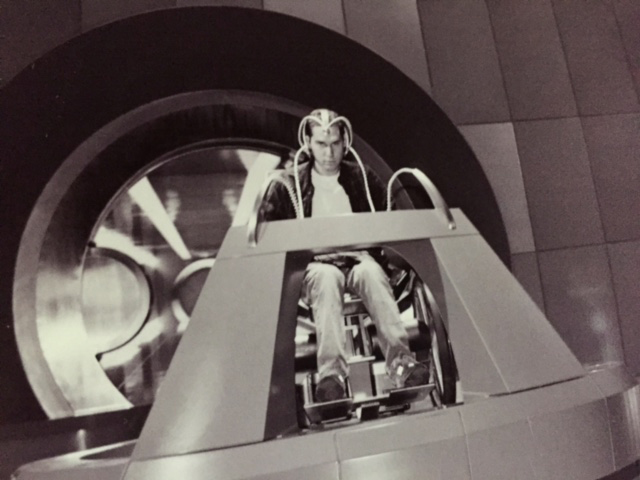 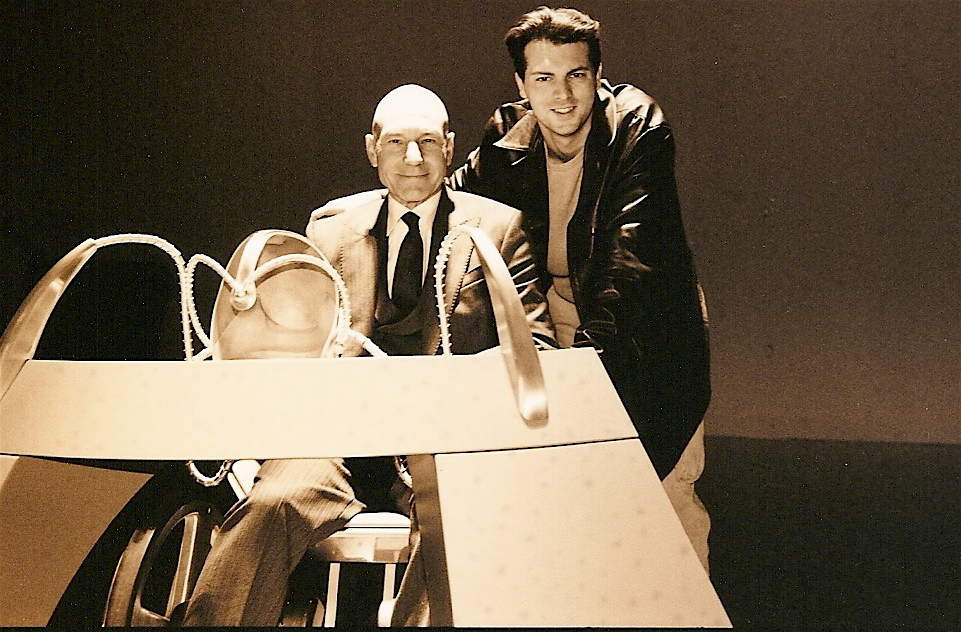