For as long as I can remember, I have been enamored of Morocco: the allure of the desert, the artistry of the region, the colors and textures and scents. But I never found my way there until recently. While filming an episode of my History documentary series In Search Of, I was thrilled to learn that our itinerary would take us to Agadir on Morocco’s central coast, in pursuit of the lost city of Atlantis. Our trip was short, and while Agadir is stunning in its own right, with mountain energy cascading into the sea, I wasn’t coming this far without a night in Marrakech, the one city in the world that has always called to me.

As soon as we were done shooting in Agadir, around 8 p.m., I peeled off from the rest of the crew and hopped in a car for the three-hour drive northeast to Marrakech. I could feel the city before I could see it. Something shifted in the darkness whizzing by outside, and the endless expanse of the desert gave way to a kind of awakening. I emerged from the arid, inky black into a quality of light that even at night had a magic about it.

The first thing I felt was the ancientness of the place. We wound our way through the outskirts and headed through the modern neighborhoods that comprise the areas surrounding the Medina, the ancient fortified city at the heart of Marrakech. Passing through the gates of the walled city was like traveling through a time portal. Modern architecture gave way to ancient buildings and narrow streets that offer a palpable sense of being somewhere otherworldly.

I did a lot of hotel research, and booked a suite in a riad in the Old City called La Sultana. A riad is a traditional Moroccan house, with a floor plan designed around open courtyards that connect different areas through breezeways. It was like walking into a palace: incredible Moroccan tiles lining floors and hallways, flowing curtains separating spaces, and gorgeous chandeliers and fixtures welcoming you into every room. The rich fragrance of incense wafted through the main areas. My room was full of dark wood and colorful lights, detailed carvings in the walls and furniture, and an opulently tiled bathroom with a deep bronze bathtub (lasultanahotels.com). 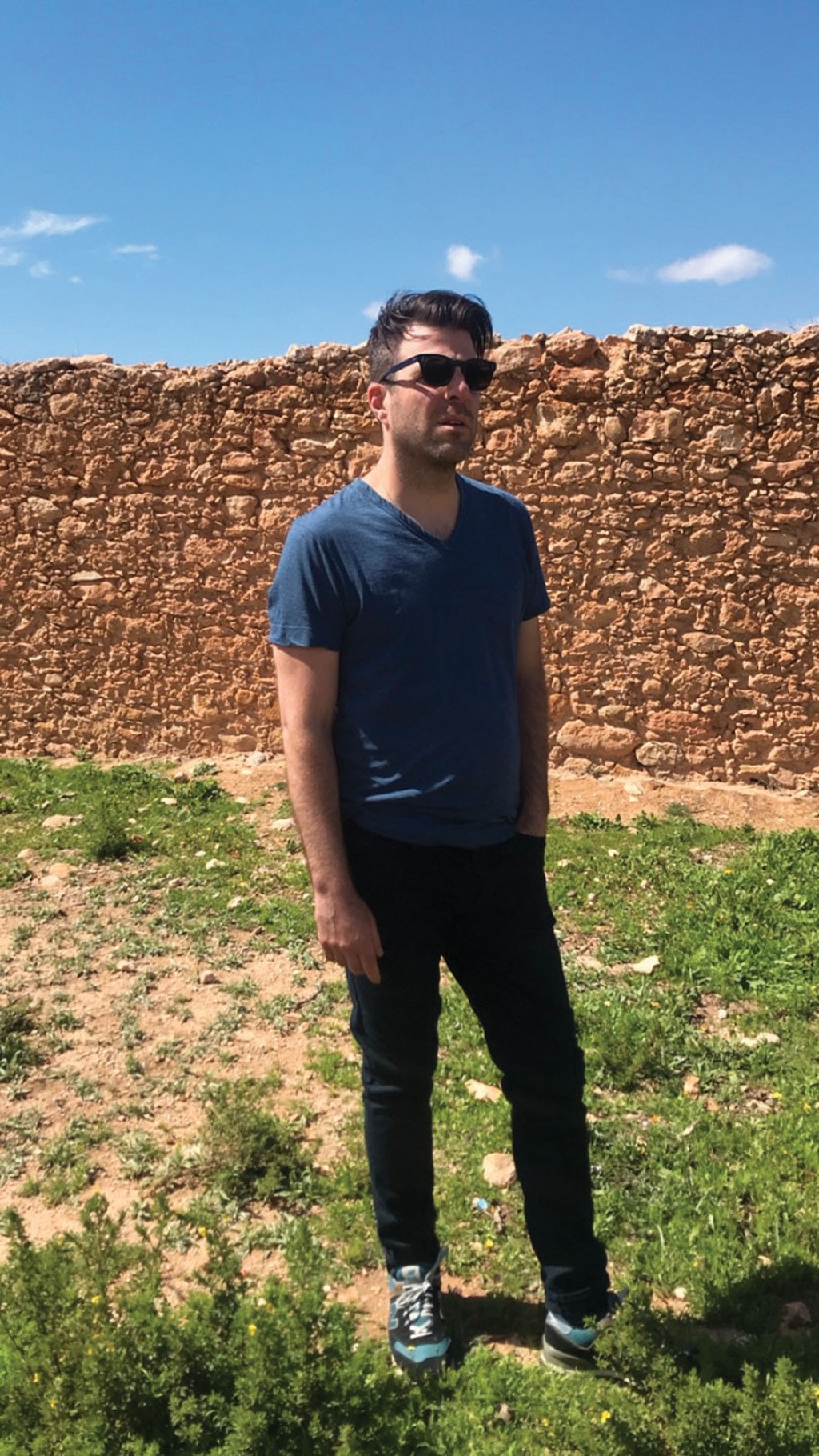 The next morning, with sunlight pouring through the window, I bounded out of bed and down to the courtyard for a quick breakfast of eggs and juice, and then headed out into the chaos of the city. What became evident very quickly is that the surest way to have an authentic experience in Marrakech is to get lost.

My first stop, at the heart of the Old City, was the marketplace and square called Jemaa el-Fnaa. This bustling, cacophonous and truly overwhelming public square is overrun with tourists and local attractions. Traditional Berber flutes and percussive instruments blend and clash with songs and shouts from vendors and local performers — snake charmers and monkey handlers who chase you down if you photograph them without paying for the privilege. There is a sense of transactional expectation that borders on confrontational here. I found it interesting but somehow off-putting to feel hustled by people ultimately exploiting animals for profit. While I did pay for the opportunity to document getting closer than I’ve ever been to a coiled and writhing king cobra, I drew the line at the monkey handlers.

I went deeper into the winding labyrinth of the Medina to explore its massive and mysterious market, the Souk, where the real spirit of Marrakech unfolds. Tiny alleyways and streets are packed to the edges with tourists and locals intermingling and moving like water through pipes. Every turn is marked by a new row of stalls in which trinkets and tchotchkes are sold by local craftspeople: antiques from nearby nomadic desert tribes; leather goods (often camel) like bags, shoes and wallets. There are silver stalls, instrument stalls, woodworking stalls. The value of bargaining in souk culture is immediately clear: Haggling is a form of socializing. 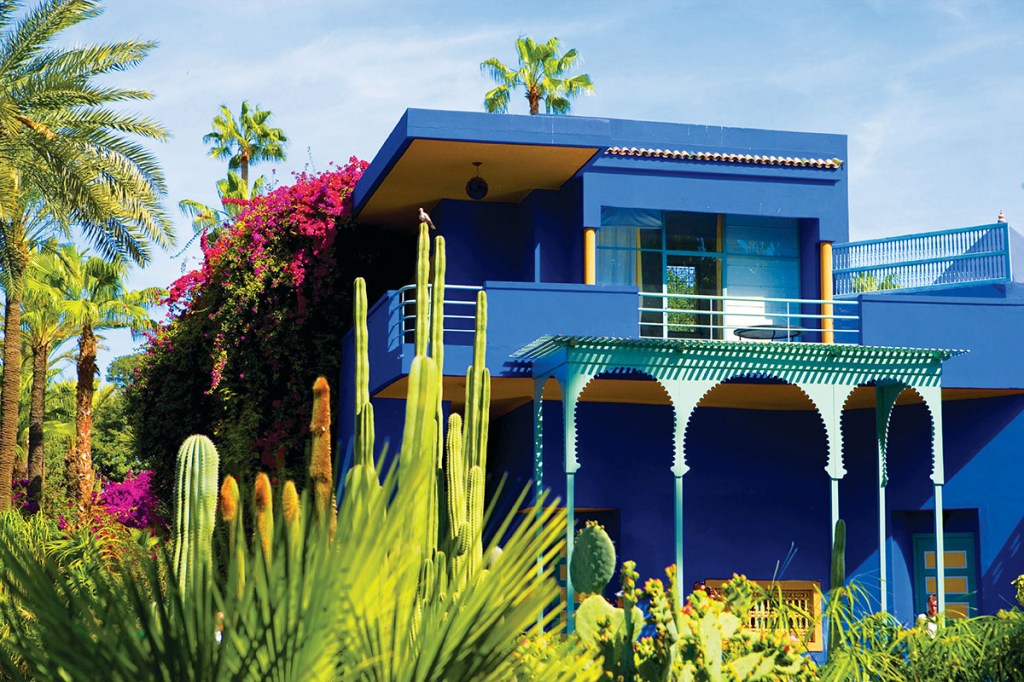 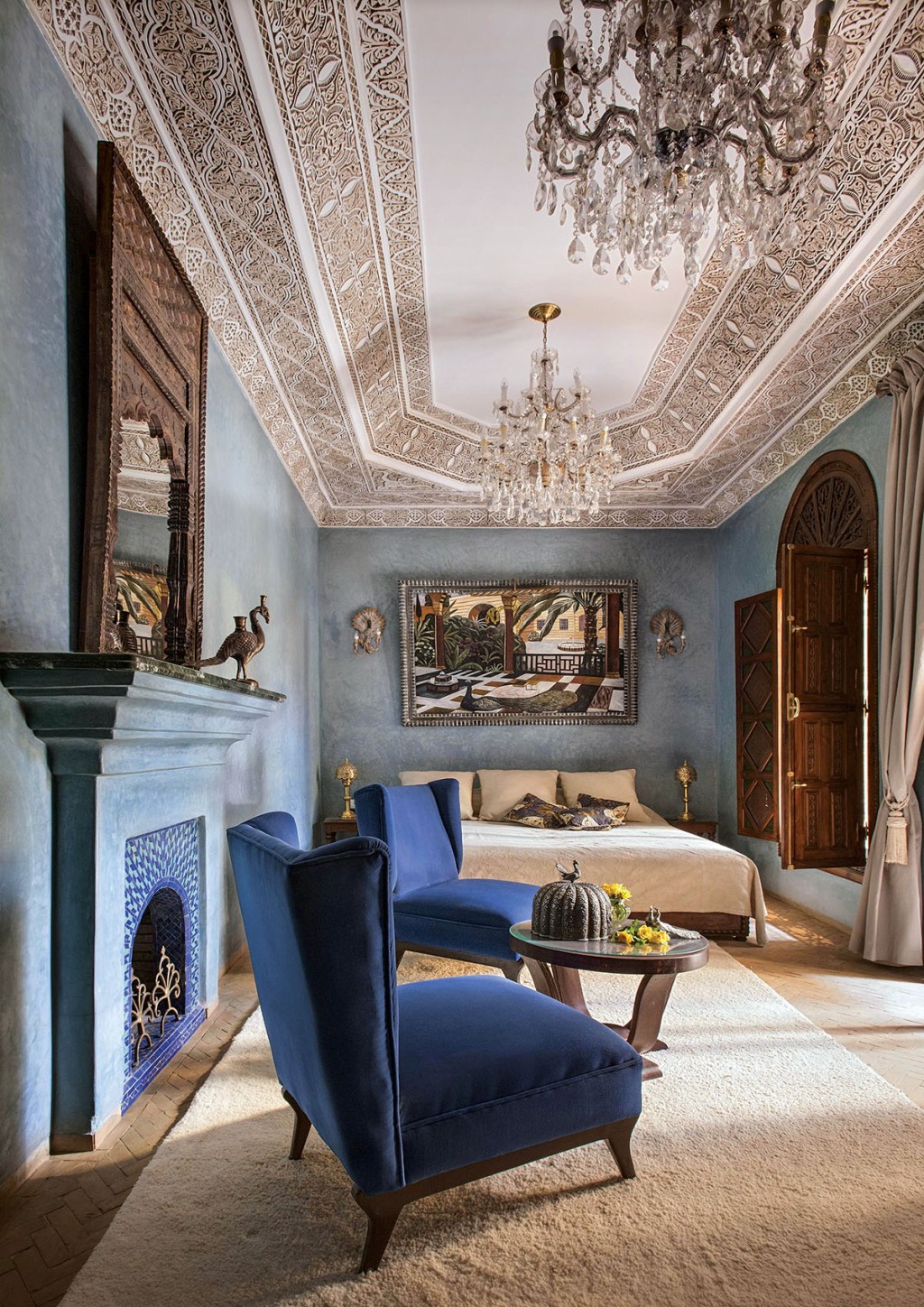 I felt anxious about the language barrier, but any self-respecting, successful vendor in the Souk can speak multiple languages. And “no” is not an answer they readily accept. The sale is king in the Souk of Marrakech; shopkeepers have fun trying to discover the most successful tactic to complete a transaction — and that fun is infectious. What began as anxiety quickly evolved into a thrill at my ability to acquire at a favorable rate a pair of traditional Moroccan slippers, a small silver bowl and a camel leather duffel bag. But when I found myself at a famous Moroccan rug market, all my confidence was swallowed up by the Svengali-like salesman, who clearly marked me as an inexperienced tourist customer eager to bring home with me some piece of this magical land.

Shopping for rugs in Morocco is a ritualistic process involving tea service and the presentation of dozens and dozens of unimaginably beautiful rugs from all over the region. A parade of styles and colors are laid out before you in specially designated showcase rooms, and they’ll just keep laying down beautiful rug after beautiful rug, almost clobbering you with options. Not until you forcefully dictate that you’ve seen enough will they consider stopping. It’s as though by sheer force of will you go home with something. In my case with many things. Once a salesperson has you in his or her grasp, it’s like you’re a rat in the jaws of a snake. They are formidable, powerful, and have honed skills of manipulative negotiation over years of practice and success. They ingratiate themselves, and then confuse you with currency exchanges. They praise your resolve and then systematically dismantle your resistance to their charms. There is an art to the process, and it is enjoyable, even as you may be getting slightly swindled into paying more than you need to. Making the sale, with its Glengarry Glen Ross energy, is the zenith of the souk mentality. 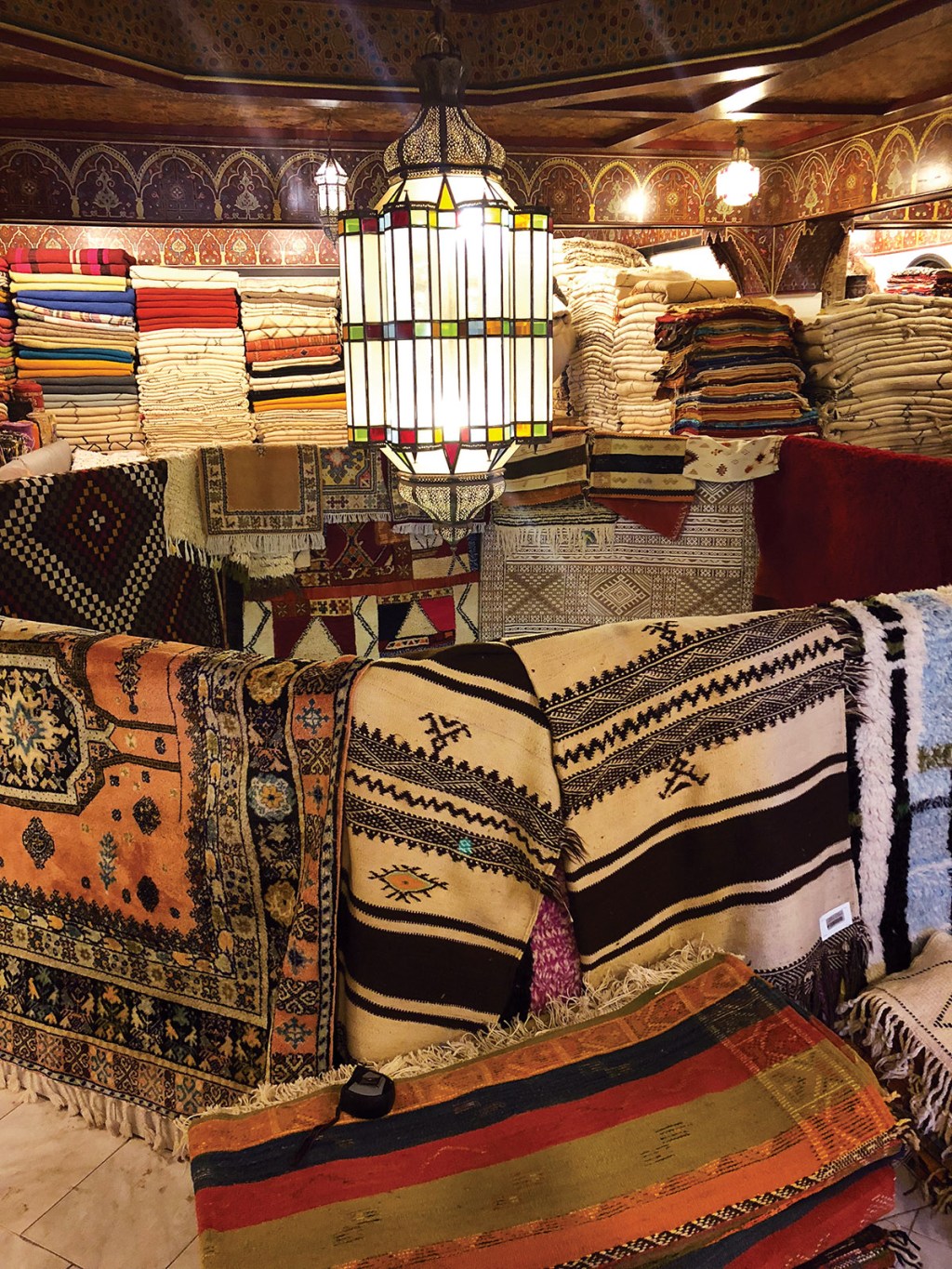 In the end, my rug merchant, who referred to himself as “Hassan Goodprice,” sold me three Moroccan runners and two large pouf pillowcases for hundreds of dollars more than I should have spent. Still, it was an adventure, and I have these beautiful pieces in my home now, priceless for the story of how they got there.

Evening was setting in, and before our exquisite traditional Moroccan dinner of pastilla and tagine at renowned Al Fassia Aguedal (alfassia.com), I wanted to see Majorelle Garden. Commissioned in 1931 by Jacques Majorelle as a villa and studio with surrounding garden, the lush oasis fell into disrepair upon the French painter’s death 30 years later. When it was threatened by developers in 1980, legendary fashion designer Yves Saint Laurent and his partner, Pierre Berge, bought and restored it to beautiful simplicity. They separated the villa from the garden and lived there, while keeping the garden open to the public. At night after the garden closed, they would move freely between the two areas and host dinners and parties in the garden, which became their private nocturnal botanical wonderland.

Saint Laurent often noted that he derived endless inspiration from the garden’s vivid colors and plantscapes. After his death in 2008, the studio was transformed into a small but impressive museum that houses the private Berber collection of Saint Laurent and Berge. Because of my fascination with them, I made a brief but meaningful sunset visit to the garden (jardinmajorelle.com).

It is the sounds and the light of Marrakech that register vividly in my memory, and make me determined to return there and spend more time. Walking through labyrinthine streets and alleys, I was filled with the feeling that I could easily live in Marrakech, a powerful, romantic and incredibly inspiring place. As the sun blazes through the sky, the ancient roofs of the Medina buildings cast the most magnificent shadows on the walls and ground that run through the Souk. It is a quality of light that has its own personality. There is a sense all around that magic and self-discovery can happen at any turn.

The show is on HISTORY on Fridays at 10 p.m. 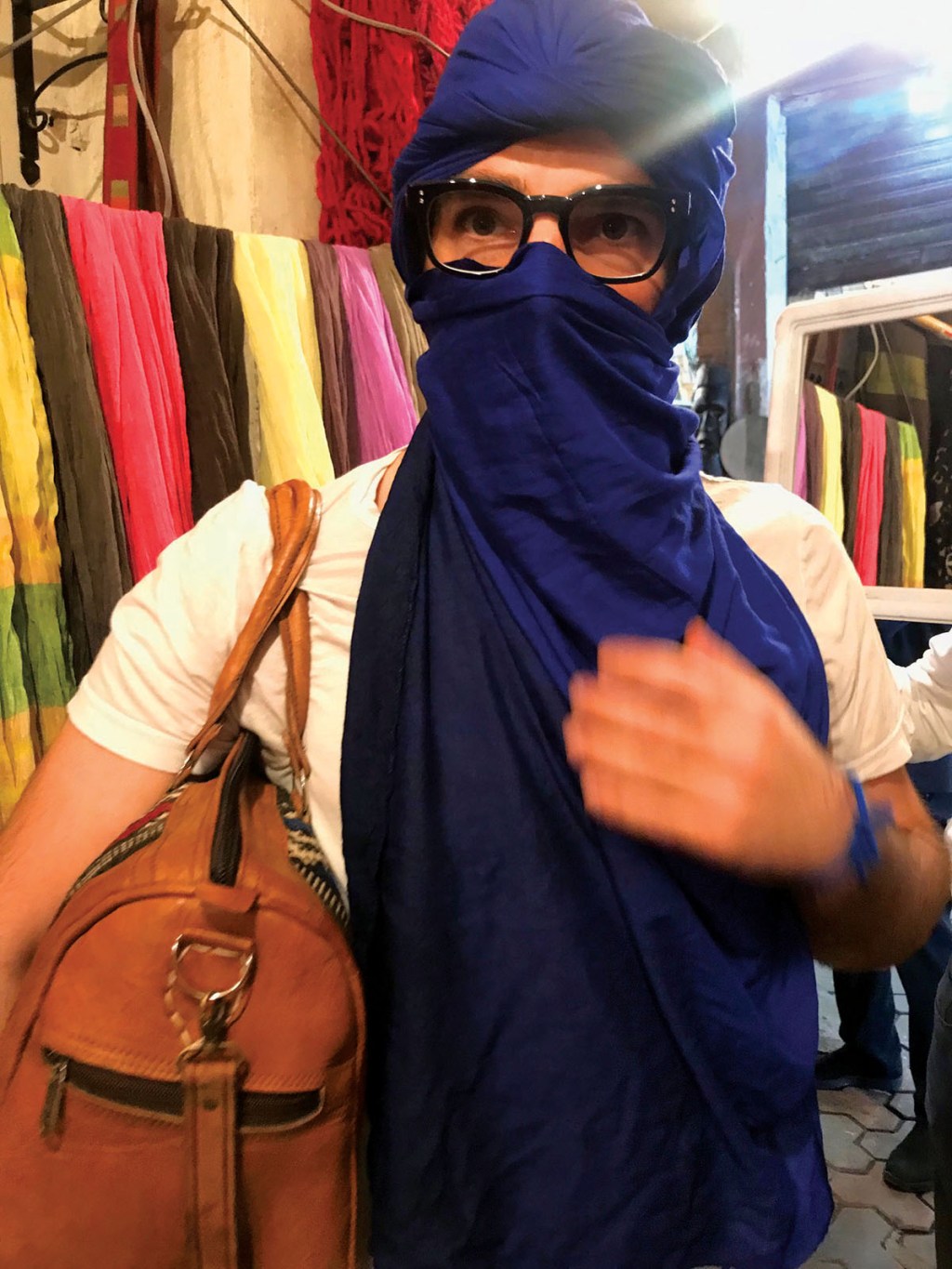 A Hollywood Insider's Guide to Morocco: "The Most Lovely Spot in the Whole World"

A version of this story first appeared in the July 18 issue of The Hollywood Reporter magazine. To receive the magazine, click here to subscribe.