One Second originally was set to premiere at the Berlin International Film Festival in 2019, but it was removed from the lineup at the last minute with producers citing “technical issues,” a common euphemism for censorship objections from the Chinese government. The episode sent shockwaves through the international film community, signaling that recent changes to China’s censorship apparatus would mean a much more repressive stance towards filmmaking.

How much Zhang was forced to change his film to appease the censors is likely to remain unknown, given that the original version was never publicly shown. The new version of One Second runs 104 minutes, just one minute shorter than the runtime of the film that was selected by Berlin. Zhang and some of his actors also returned to the Gobi desert in China’s Gansu Province over the past year to conduct reshoots, suggesting that the changes were more than merely cosmetic.

Starring Zhang Yi and Fan Wei, One Second is said to be Zhang’s most personal project in years, one he had been wanting to make for nearly a decade. Set during China’s 1966-76 Cultural Revolution period — the depravations of which the director experienced firsthand when he was sent away to the countryside for political re-education in his youth — One Second was shot in and around the small Chinese town of Dunhuang, known for its evocative, sand dune-swathed landscape. Many have speculated that the Cultural Revolution era setting is what landed the film in hot water with regulators.

The original film’s story was said to center on an ex-con and young woman bound together by parallel pursuits of an enigmatic film reel — one of the ubiquitous propaganda news reels that were transported across the countryside during the 1960s and 70s for the entertainment and political edification of rural villagers. The man, recently escaped from a Cultural Revolution prison farm, has reason to believe the reel contains a glimpse — lasting just a single second — of his beloved, deceased daughter. The girl played by Fan Wei carries her own desperate motives stemming from a personal loss and a hoped-for shot at redemption.

Early marketing positioned the film as Zhang’s ode to lost time and his personal love letter to cinema. (The director’s most devoted fans were quick to notice biographical echoes in the fact that Zhang is known to have once been painfully estranged from a daughter of his own, from an earlier marriage).

Cannes: What Will Become of Zhang Yimou's Censored Masterpiece 'One Second'?

Any Zhang Yimou film is a major event in China, but One Second appears to be more in the director’s drama and arthouse vein than the period action flicks — Hero (2002), House of Flying Daggers (2004), Shadow (2018) — he is best known for in the West.

The movie nonetheless will be hitting Chinese screens at a moment of abundant market potential. With COVID-19 effectively suppressed in China, the country’s cinemas are operating at 75 percent of usual seating capacity and moviegoers have returned to the multiplex en masse. Chinese theaters brought in a whopping $544 million in ticket sales during the recent weeklong National Day holiday period (Oct. 1-8). Major Hollywood releases, meanwhile, have been postponed throughout the remainder of 2020, as the U.S. studios worry about diminished earnings potential in North America. One Second is expected to face little significant foreign competition during its release in late November.

One Second is produced by rising Chinese studio Huanxi Media, where Zhang is a shareholder. The studio released a new poster and Chinese trailer for the film on Wednesday. 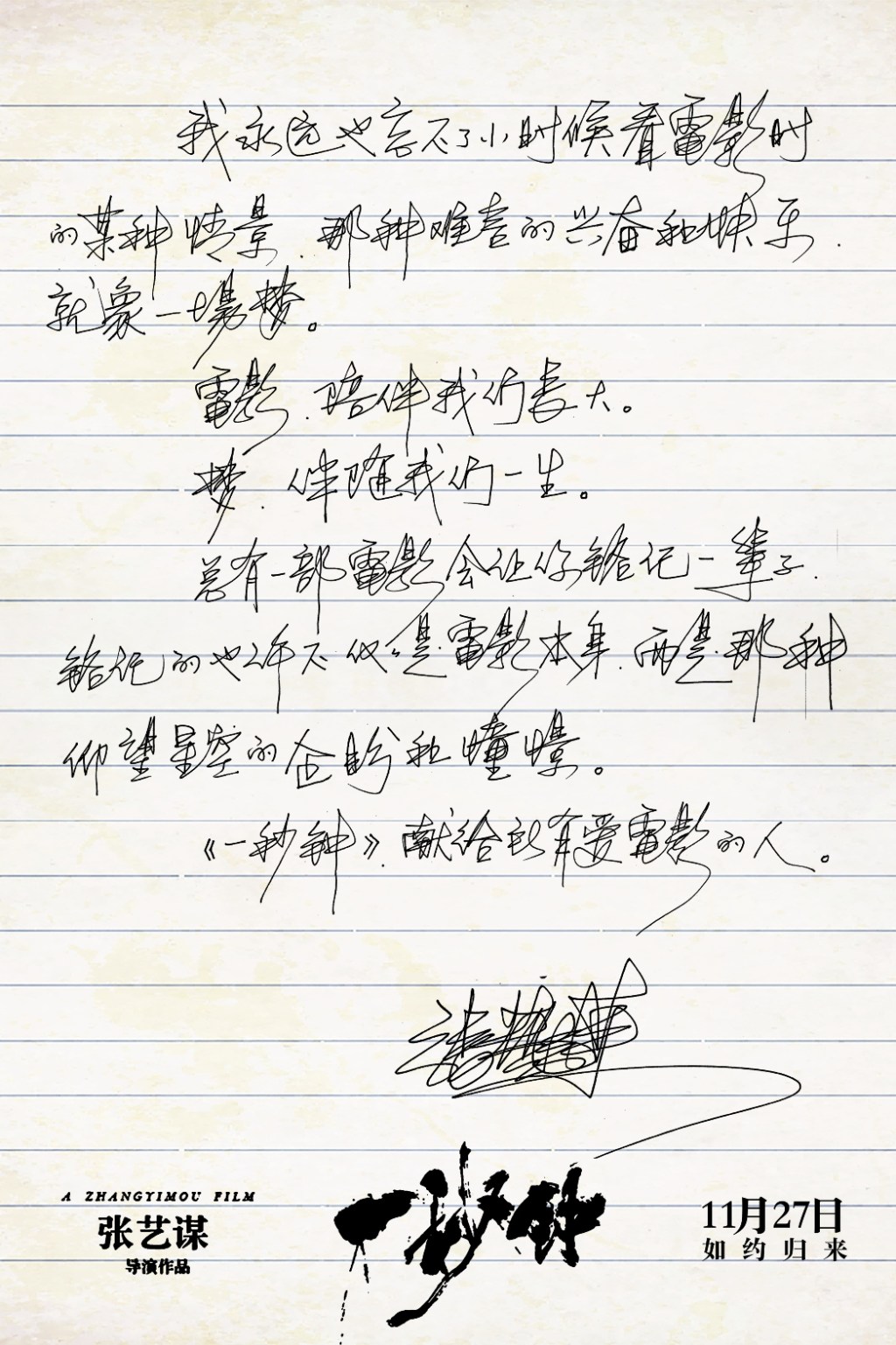