There are plenty of screenwriting teams that have a strong rapport and even the ability to finish each other’s sentences. But get Paul Dano and Zoe Kazan in the same conversation, and the two have the type of banter that can only come from a pair that’s bonded in work as well as in life.

Dano and Kazan, who have been a couple since 2007 and have an infant daughter together, collaborated on the page for the first time for Dano’s directorial debut, the period melodrama Wildlife, based on the 1990 book by Pulitzer Prize-winning novelist Richard Ford.

Dano, 34, had fallen in love with the story — a 1960s-set domestic drama centered on a troubled marriage — when he read it, and since he had been looking for a project to direct, he gave it to Kazan, 35, just to see if there was a movie in its spare, lean writing.

“The two of us know each other’s tastes so well, it’s like encyclopedias in our heads,” Kazan explains. “I immediately saw what Paul wanted to do with it and the film he wanted to make. I suggested we option it, and we did.”

Well, hang on. It didn’t go quite like that, Dano says: “We actually thought about it for a year before we optioned it, exploring why I would do it, and put lots of thought into it all before we wrote to Richard for the rights. Also, there was the fact that we didn’t think the ending of the book would work for the film.”

Kazan jumps in, giving Dano credit for the movie’s powerful final scene, most of which is a wordless moment between Jake Gyllenhaal’s Jerry, Carey Mulligan’s Jeanette and their teen son, Joe, played by Ed Oxenbould. “That last scene of the film is invented,” Kazan says proudly. “It just came to Paul. It’s one line in the book, but Paul had the idea to expand it.” 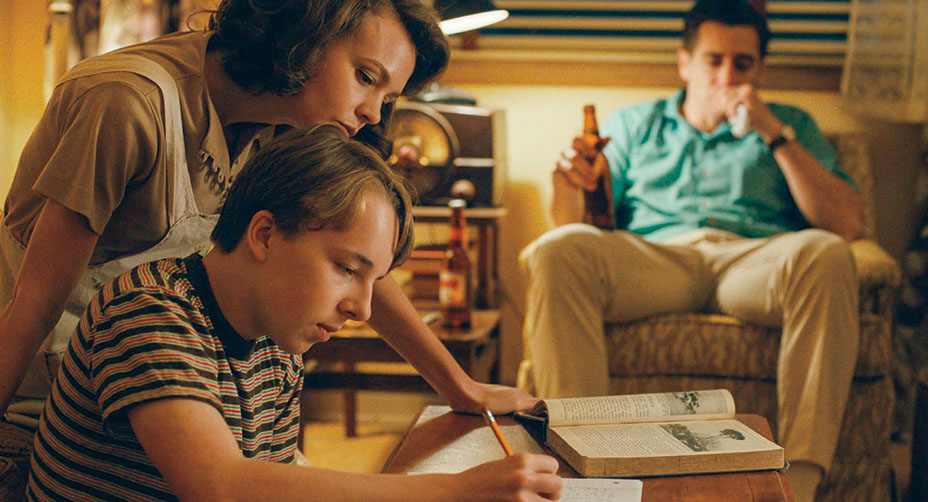 Adds Dano of the insight, “That led to my taking the leap.”

While both of them have been successful actors for years (they met making an off-Broadway play), Kazan — the daughter of screenwriters Nicholas Kazan and Robin Swicord and granddaughter of director Elia Kazan and playwright Molly Kazan — also built a career as a writer, having penned the 2012 movie Ruby Sparks, in which the pair starred, as well as several produced stage plays. Dano, however, had never really written anything. Nevertheless, once they had the option in hand, in early 2013, he decided he wanted to take a crack at adapting it himself.

Spoiler alert: It did not go well.

“It’s an anecdote now,” he says, laughing, “but the first draft was not in a proper screenplay format. It was more written by the image, single-spaced and in Microsoft Word. I gave it to Zoe to read, thinking it’s more of a script, rather than a screenplay. The thing is, with her having grown up with two screenwriter parents, she didn’t accept it as a script. There were so many notes, and as a neophyte writer, I was not in a place to receive so many notes, and we got into it a bit.”

Kazan has her version of events: “I basically said it was easier to show you what I meant than to tell you,” she says. “But I also got hung up on little things, like it not being the right format. And Paul was like, ‘It’s perfectly clear!’ and being really stubborn about it.”

Still, Dano recognized that his screenplay needed more work. When Kazan offered to take a crack at doing a draft, he readily agreed, which surprised her, but he had a method to his madness: He was essentially baiting her into helping him. “She’s a really good writer and we share the same tastes, she’s one of the smartest people I know, there’s no boundary issue, and I was very happy to have her want to help.”

Thus began a three-year, off-and-on project wherein the two would take turns working on the screenplay, passing it back and forth in between acting gigs, never really working on it together because of their different schedules and general logistics.

Without much discussion, that process became the norm, something that they both enjoyed and which allowed them to each, as Paul says, “be our own writers in those moments, which I think is nice.” Gradually, the screenplay started to take shape, but when the financing came together, Kazan was doing a play, After the Blast, in New York, and couldn’t get away for the shoot.

“It was a terrible time for me,” she explains, “but it turned out great for the movie and our relationship, because it gave me a different perspective on the filmmaking.”

She would do rewrites from New York and send them to the set in Oklahoma while Dano was busy “putting out three fires a day.” Likewise, while he initially wanted Kazan there with him, he saw the benefits of her being half a continent away, saying, “Your day goes so fast, and things are so complicated, so to have her not be attached to the ebbs and flows of it, and have some distance to look at things clearly, was very helpful. I think it worked out this way for a reason.”

Wildlife debuted at the Sundance Film Festival in January, then screened at Cannes, Toronto and the New York Film Festival before it was released Oct. 19 by IFC Films. Dano says he loved the experience of directing — and judging by the fact that he was just nominated for a Spirit Award for best first feature, the experience loved him, too — but also of creating something alongside his partner.

“I can’t wait to do it again,” he says, then adds with another laugh, “Hopefully, I can rope her into doing it with me.”

It doesn’t sound like that will be too hard. “It was such a harmonious experience,” Kazan agrees. “I love the way he thinks about a film and how he envisions it. I would write again for Paul in a heartbeat.”

Carey Mulligan Is Protective of Her "Unlikeable" Character in 'Wildlife': "We Can't All Be Perfect"