A dubious quote plastered outside the Walter Kerr Theatre declares, “It’s impossible not to be charmed” by Amelie, A New Musical. While reviewers spend their working lives arguing that all critical opinion is by its very nature subjective, I’d call that fake news. Just as Jean-Pierre Jeunet’s popular 2001 French film presented an elaborate fantasist’s version of modern-day Paris, bursting with quaint eccentrics, this grating stage musical takes the slenderest of romances and drowns it in cartoonish quirks in place of genuine warmth or feeling. And while Phillipa Soo is a creditable stand-in for the movie’s uber-gamine Audrey Tautou, as a musical comedy heroine, Amelie Poulain is a dud, a bundle of cutesy affectations in search of a human core.

This is a show that announces its assaultively enchanting intentions right off the bat, even before the singing goldfish pipes up, and long before the garden gnome starts crowing about his global adventures. I confess I never got the head-over-heels love for the movie, a whirligig of contrived whimsy, set in a suffocatingly over-art-directed Ville Lumiere and built around a twinkling do-gooder too busy making magic in the lives of others to tend to her own happiness.

The Bottom Line An overstuffed trifle laced with a hazardous dose of artificial sweetener.

Maybe that excludes me from the show’s ideal audience. But it seems to me that fans of Jeunet’s film will be getting a diluted version while newcomers will be wondering what the hell is going on in this manic reinvention, which fails to make a convincing case for the material as musical fodder. And that’s after two previous tryout engagements (at Berkeley Rep and Los Angeles’ Ahmanson Theatre) plus almost a month of previews in New York to improve the formula.

For every smart decision made by book writer Craig Lucas, composer Daniel Messe and his co-lyricist Nathan Tysen, there’s a trousseau of head-scratchers. For instance, the creative team has jettisoned the movie subplot in which Amelie teaches a lesson to the spiteful greengrocer who mistreats his slow-witted clerk. And yet they appear long enough onstage for the latter (Heath Calvert) to sing an ode to, yes, figs before the boss tells him, “Get moving, spaz!” Then they pretty much disappear from the story. So we get an odious character, a jarringly insensitive insult and an asinine song performed by someone with zero relevance to the plot.

That kind of thing happens throughout. Don’t get me started on the interlude in which Amelie imagines herself a beloved saint of the people like the freshly deceased Princess Diana, prompting a gushing tribute anthem from a chunky Elton John in garish “Croc Rock” glam mode (Randy Blair). Moments that don’t cry out to be musicalized get slathered in song, while others where the emotional amplification of music might have helped go unsung. If there was a number that satisfyingly expresses Amelie’s longing to escape her chronic shyness and engage with the world as a whole human being, I must have missed it. Instead, we get a string of labored metaphors. The musical, like the movie, has a pathological aversion to simplicity.

To the writers’ credit, the film’s interminable streams of voiceover have been whittled down to their essence, for instance reducing the litany of neuroses and tics belonging to Amelie’s parents, Raphael (Manoel Felciano) and Amandine (Alison Cimmet), to a line or two each in song. Much is made of geometry lessons in which the homeschooled young Amelie (Savvy Crawford, excellent stage name) learns about Zeno’s paradox, positing that no two objects can ever connect because each attempt to reach a point results in the arrival at a halfway point to somewhere else. Or something. Mostly it just seems designed to distend a basic meet-cute scenario into some kind of Rube Goldberg-esque torture. 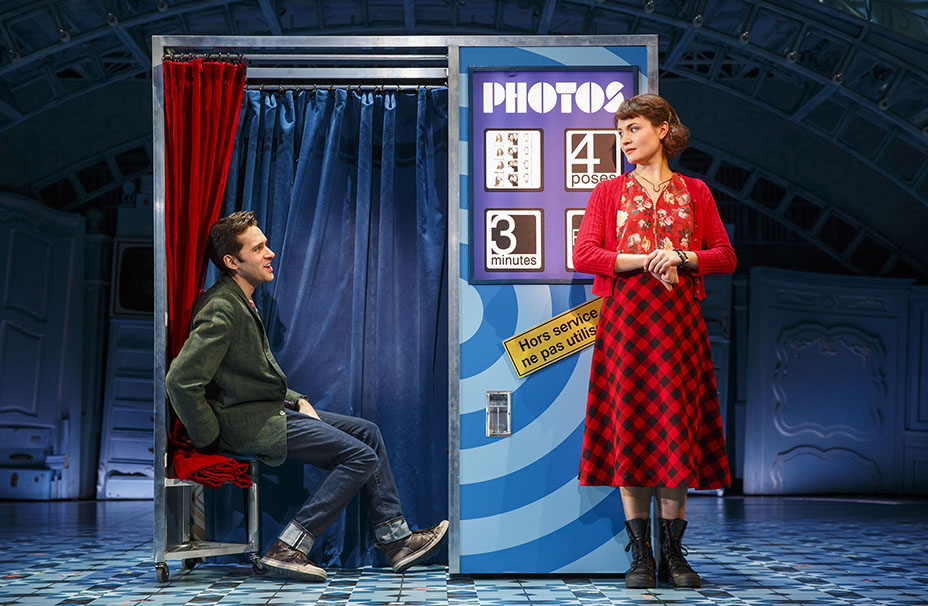 The elfin adult Amelie (Soo) relocates to Montmartre and starts working as a waitress at the Café des 2 Moulins, where “she lives quietly among her co-workers and loudly in her imagination.” Great. We’re alerted that her life is about to change, which it does when she finds a tin box containing a young boy’s treasures hidden in her apartment, and sets out to trace its owner and return his lost childhood. The success of that act of generosity supposedly instills a mission in her, though the storytelling is too incoherent to make this a tangible plot thread.

More substantial are Amelie’s repeat encounters with Nino (Adam Chanler-Berat), a twitchy rabbit of a youth who works in a Pigalle sex shop and collects discarded snaps from Metro station photo booths. When the album containing this random portrait gallery comes into Amelie’s possession, her wildly over-complicated efforts to return it and meet the owner who makes her heart glow (literally, in a visual gag beaten to death) drives whatever erratic forward momentum the one-act musical can muster.

Messe, with his Brooklyn-based band Hem, previously composed lovely Celtic-flavored neo-folk tunes for a 2009 Shakespeare in the Park production of Twelfth Night that starred Anne Hathaway. But that score was designed to enhance the mood rather than tell the story. His songs here are certainly pleasant and melodic, with lots of shimmering piano, and their lyrics occasionally clever — even if nothing lingers for long. But they rarely draw us closer to the key characters or make us root for their inevitable romantic connection.

For example, Nino has a pretty song called “When the Booth Goes Bright,” in which Chanler-Berat’s sweetly soaring vocals ponder the lives of the strangers captured in his photos. The number should convey something of Nino’s longing for a soul mate he can truly know, but instead it remains abstract. In an earlier song, “The Girl in the Glass,” Amelie and her fragile painter neighbor Dufayel (Tony Sheldon) contemplate the elusive figure in a Renoir copy he’s unable to finish. Of course, they’re singing about the incomplete Amelie, but the analogy is too fussy to resonate. And when it seems that the face-to-face meeting of Amelie and Nino can be delayed no longer, the writers stick in a song in which the female café staff rehash their troubled history with men. Many of the numbers work as musical vignettes, but they don’t cohere to tell an engaging story.

Nor do they carry even the faintest whiff of France. It’s all very well to eschew clichéd accordion riffs, but the score has no binding flavor to provide the show with a sense of place. Arguably the element that most evokes Paris is the acidic green that dominates designer David Zinn’s set, which recalls the color of the city’s iconic art nouveau Metro entrances. There are captivating shadow effects in the lighting by Jane Cox and Mark Barton, but the design generally is more busy than appealing, taking its cue from Pam MacKinnon’s direction and Sam Pinkleton’s musical staging. With more swinging doors than most farces, this is a show that manages to be simultaneously frenetic and inert.

The talented cast fights a losing battle to give these annoyingly artificial characters life, with the reliable Sheldon perhaps coming closest to shaping a multidimensional portrait out of Dufayel, while Chanler-Berat breathes the odd moment of poignancy into the fey Nino, despite the obstacles stacked against him by the writers. The gifted Soo, so moving as the original Eliza in Hamilton and spirited as Natasha in the off-Broadway iterations of Natasha, Pierre & the Great Comet of 1812, looks aggressively adorable in Zinn’s perky costumes and sings with clarity and gusto. But she’s not in her element carrying this kind of oddball comedy, flashing an endless succession of winsome smiles to diminishing returns.

It’s not the performers’ fault that nothing in this distancing misfire explains why anyone ever thought to make a musical out of a movie whose hard-sell delights and self-congratulatory tricks already made most musicals seem like models of restraint.