In his stirring, Oscar-nominated 2012 documentary How to Survive a Plague, David France chronicled with incisive detail the mid-1990s breakthrough in HIV treatments that radically altered the trajectory of AIDS. He steps back again into the LGBT past with comparable investigative zeal in The Death and Life of Marsha P. Johnson, digging into questions that remain unsolved 25 years after the pioneering transgender activist and Stonewall riots front-liner was found floating in the Hudson River. While the sense of closure that the film seeks to provide perhaps inevitably remains elusive, it covers another vital chapter in queer history, sadly still relevant in the ongoing frequency of violence against trans women.

Cynthia Erivo on Identifying as Queer Later in Life: "We Assume Every Queer Person Knows It From the Beginning"

The film finds a proxy to do its sleuthing in Victoria Cruz, a transgender activist preparing to retire from the New York City Lesbian and Gay Anti-Violence Project. As a parting mission, she sets out to reopen the cold case of Johnson’s presumed murder in 1992 and bring her justice. Cruz’s own history of being assaulted gives her a personal investment that goes beyond Johnson’s beloved standing in the community.

The Bottom Line An impassioned inquiry, even if it tends to wander.

France also broadens the perspective to trace the rocky life of Sylvia Rivera, a fellow activist who in 1970 with Johnson co-founded STAR (Street Transvestite Action Revolutionaries), a housing and support program for young trans women of color. And the film gains contemporary relevance by tracking the long-delayed sentencing in 2016 of the man who confessed to beating 21-year-old trans woman Islan Nettles to death in Harlem three years earlier. That case is representative of an escalating trend in violence against the transgender community.

Trenchant points are made about the way gay marriage became such a mainstream liberal cause that many in the LGBT community now celebrate living in a post-equality era. But the rights of gender nonconforming people have a history of being sidelined, which dates back to “drag queens,” as they were then known, being hidden in the rear of the early, post-Stonewall Gay Pride parades. The film makes a strong case for more stringent protections for trans people, though the spread of France’s journalistic attention comes at a cost to the central focus. Johnson herself is frequently allowed to drift to the margins.

An often homeless self-described “street queen” who was a regular fixture in Greenwich Village, dispensing cheery greetings with flowers in her hair for more than two decades, Johnson is heard in archival interviews describing her involvement in the violent protest during a 1969 police raid at the Stonewall Inn, at that time owned by the Mafia. That experience galvanized Johnson and Rivera to fight for the inclusion of trans representation in the nascent gay rights movement, often encountering hostile opposition from other factions.

Following only the most cursory investigation, the NYPD ruled Johnson’s death a suicide. Many questioned that conclusion, but protests led by friends and fellow community members calling for greater resources to be funneled into the case were ignored. A quarter-century later, Cruz meets resistance in obtaining access to police files, but she uncovers documented evidence that Johnson was last seen being pursued by two threatening men the night before her body turned up in the water near the Christopher Street Pier. Johnson was outspoken about the risks of tackling the Mob; her roommate at the time had been lobbying to have officials with alleged Mafia ties removed from the running of the Christopher Street fair, enabling profits to remain in the gay community.

There’s no shortage of compelling evidence that a full murder investigation was warranted, and France amplifies that injustice with anecdotal information about the significant number of trans women who continue to disappear off the streets every year — mostly drug overdoses, suicides, or murdered by pimps or johns. What’s perhaps most shocking is the fact that the “panic defense” — in which men charged with assault claim they were motivated by their initial failure to realize the victim was a trans woman — continues to be invoked in bids for lenient sentencing.

Despite many personal remembrances, Johnson remains a largely unknowable figure, as much a legend as a vibrant life force snuffed out in murky circumstances. That makes her more symbol than subject, despite the film’s title.

A more three-dimensional portrait emerges of Rivera, thanks to extensive interviews conducted before she died of liver cancer in 2002. Often seen side by side with Johnson in video and photographs, Rivera was the more politicized of the two. One especially powerful clip has her taking the stage at a 1973 rally, refusing to back down in a fiercely angry speech, while being booed by large numbers of gay men and lesbians in the crowd. There’s pathos in her bitter recollections of feeling betrayed by the movement, attempting suicide and then later sliding into alcoholism, living in a makeshift shelter on the West Village piers, which became a gathering place for homeless LGBT people before the West Side Highway restoration project.

Footage of the area from the 1970s through the ‘90s provides fascinating evidence of the relentless flux of gentrification, and the high-end boutique and restaurant destination of today’s Meatpacking District is barely recognizable in film of the trans prostitution beat once known as “The Stroll.” Those glimpses of old New York are inextricably linked to the history of the LGBT rights movement, of which Johnson and Rivera were early heroes deserving of wider recognition.

As he did in How to Survive a Plague, France uses music (here by Bryce Dessner) with great skill to heighten the emotional impact or underline the lingering mystery of still-unanswered questions. While this film doesn’t match the earlier work’s muscular narrative cohesiveness, it nonetheless honors important lives, shining a light on marginalization and injustice that persist today. 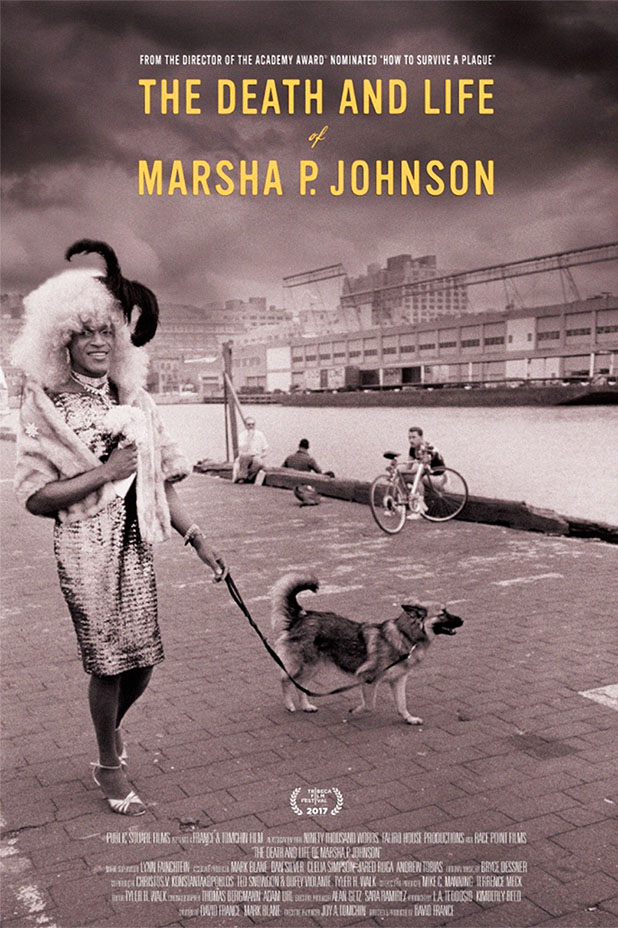