Even the notoriously prickly Larry Kramer gets cozy in Every Act of Life, an account of Terrence McNally’s six decades in the theater that’s less a documentary profile than a smoochfest. Though as far as subjects for hagiographic treatment go, the veteran playwright, musical librettist and pioneering voice of queer lives on the American stage is certainly not undeserving — his endurance alone is inspiring. Packed with fond observations from actors who have played McNally’s characters over the years, among them Christine Baranski, Nathan Lane, Audra McDonald, Chita Rivera and Edie Falco, Jeff Kaufman’s conventional but briskly entertaining film will be met with heartfelt applause from theater-lovers and LGBT audiences.

Kevin Bacon on How He and Kyra Sedgwick Supported Their Children in Figuring Out Their Identities: "There's a Long History of Forcing Children Into Boxes"

The movie opens, fittingly, with a quote from McNally’s 1987 two-hander Frankie and Johnny in the Clair de Lune, a play later excerpted with footage from the punchy 2002 Broadway production that starred Falco and Stanley Tucci. “We gotta connect,” says short-order cook Johnny. “We just have to. Or we die.” That sentiment could in fact be the essence of McNally’s work throughout his long and prolific career, exploring the sustaining force of human contact, be it friendship, love, sex, family or community. It seems to apply equally to McNally’s own life, both in his lasting relationships and the painful losses he has racked up along the way.

The Bottom Line More affectionate than objective, but rewarding all the same.

McNally distills his love of the theater to its capacity to reinvent itself every night. Despite hits and misses, the stage has been good to him, yielding four Tony Awards and numerous successes, including The Lisbon Traviata, Lips Together, Teeth Apart, Love! Valour! Compassion! and the musicals Ragtime, Kiss of the Spider Woman and The Full Monty, for which he wrote the books. As McDonald, who won the second of her six Tonys in 1996 for Master Class and the third for Ragtime two years later, notes, his work “gets to the core of the human condition.”

Kaufman — whose previous films include the 2015 doc The State of Marriage, about the two-decade struggle for same-sex marriage equality — focuses extensively on McNally’s representation of queer characters, starting from a time of near-invisibility in mainstream entertainment. One of his early Broadway hits was The Ritz, a wild farce set in a cruisy gay Manhattan bathhouse. Rita Moreno, who scored the scene-stealing role of volatile Puerto Rican wannabe stage star Googie Gomez in that play, points to the significant fact that McNally from a relatively young age had no qualms about who he was as a gay man, unlike the deep-closet existence of many of his contemporaries.

The film provides a concise recap of his upbringing in working-class South Texas, where his hot-tempered father was a beer distributor for Schlitz. “There wasn’t a day that my father and mother weren’t drunk,” he recalls matter-of-factly, before going on to detail his own years of alcoholism. He got into Columbia University in 1956 and moved to New York at 17, with the initial intention of writing novels. Soon after graduating, he met Edward Albee just as the latter’s influential playwriting career was taking off, and an invitation for a “nightcap” led to a boozy, volatile four-year relationship. That ended when McNally was hired by John Steinbeck and his wife to tutor their son while they toured Europe.

“Don’t write for the theater,” he recalls Steinbeck telling him. “It’ll break your heart.” (In a deluxe bit of voice-casting, Bryan Cranston is heard delivering the great novelist’s words, while Meryl Streep voices a formative influence on McNally’s career path, his high school drama teacher.) McNally’s 1964 Broadway debut, And Things That Go Bump in the Night, was widely panned, but it did break ground by unapologetically putting homosexuality center stage, ruffling the feathers of many conservative critics.

Frank, emotionally complex treatment of gay themes became a recurring element in McNally’s work, notably in 1971’s Where Has Tommy Flowers Gone?, which starred the playwright’s then-partner, Robert Drivas, in the title role. Like Albee, Drivas was a heavy drinker afraid that coming out would damage his professional career; McNally’s determination to live more openly ended the relationship, though the two would remain friends. 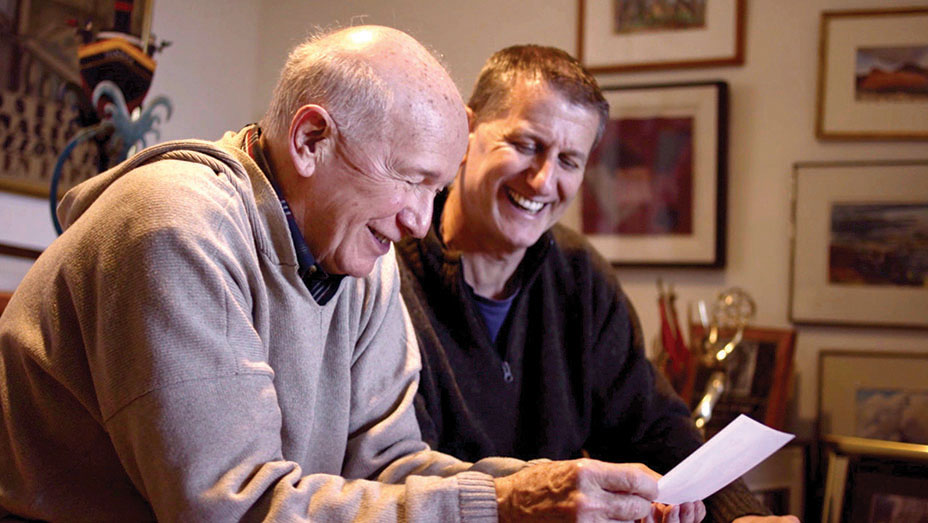 Drivas also was one of the people closest to McNally to contract HIV back in the darkest days of the AIDS crisis, which directly inspired a number of the playwright’s works, including the 1990 PBS TV movie Andre’s Mother (and its 2014 stage sequel, Mothers and Sons); 1991’s Lips Together, Teeth Apart, which unfolds over a July 4 weekend on Fire Island; and perhaps most notably, the bittersweet 1994 comedy, Love! Valour! Compassion!, set at a lakeside summer house where eight gay male friends gather over three holiday weekends. One standout clip features Lane as flamboyant costume designer Buzz Hauser delivering the character’s explosive rant about musical theater, a virtuoso monologue by turns hilarious, enraged, devastated and sometimes all three at once.

In one of the doc’s many emotional moments, Joe Mantello, who directed Love! Valour! Compassion! on stage and screen, recalls being invited to come say goodbye to McNally’s partner through much of the ’90s, playwright and theater company founder Gary Bonasorte, when his illness had progressed beyond hope. In another tender revelation earlier on, Angela Lansbury recounts taking McNally aside when his drinking had gotten out of control, urging him to stop destroying himself in words that hit home.

The loving rapport between McNally and his actors is evident throughout. Lane credits the playwright with being the first to perceive that his range extended beyond comedy; Doris Roberts, in an archival interview, talks about him writing Bad Habits for her, which she took to Broadway; F. Murray Abraham, while amusingly owning his sizeable ego, recounts turning up to audition for Tommy Flowers with no agent or appointment and landing the part that would launch his life on the stage; and McDonald recalls being just a year-and-a-half out of Juilliard when McNally thrust her onto a Broadway stage to “confront the hurricane that is Zoe Caldwell” in Master Class. We also get to hear about John Slattery’s first nude scene in The Lisbon Traviata, but alas, not to see it.

Musical fans will get a huge kick out of listening to Rivera on The Rink and Spider Woman (a Kander and Ebb jewel way overdue for Broadway revival), Marin Mazzie on the powerful historical tapestry Ragtime, or Patrick Wilson on The Full Monty, a show overshadowed at the time by the tidal-wave success of The Producers but hopefully destined sooner or later for reappraisal.

One chapter perhaps dealt with too perfunctorily is the firestorm of controversy that ignited around Corpus Christi, McNally’s 1997 take on the Passion Play, which drew death threats against the playwright with its depiction of Jesus and the Apostles as gay men in contemporary Texas, crediting the betrayal of Judas to sexual jealousy.

It has to be said that the movie is light on critical perspective. But then there’s a lot of ground to cover here, both on the professional and the personal front, not least the surprising interlude of McNally’s friendship that blossomed into a love affair with the playwright Wendy Wasserstein, whose early death at 55 of lymphoma robbed the American theater of a uniquely vibrant voice. The film’s closing section devotes touching attention to the relationship that has revitalized McNally’s later years, with former civil rights attorney Thomas Kirdahy, who became his domestic partner in a 2003 civil union and his husband in 2010, seeing the playwright, now 79, through a battle with lung cancer.

Ironically, it’s filmmaker Don Roos, a longtime friend of McNally’s not from the theater world, who notes, “Being a playwright is not a profession you ever nail.” McNally admits that only now, after decades of highs and lows, does he feel a part of the American theater and not just a visitor. This lively Kickstarter-funded tribute endorses that fellowship with admiration and gratitude.