Unlike far too many musicals regurgitated from hit movies, Groundhog Day is a delirious reinvention with its own defiantly unique personality, a relentless forward-backward spin that leaves you smiling, exhilarated and giddy, much like the Tilt-a-Whirl ride that briefly occupies the stage in the show’s second act. The fiendishly crafty creative team has devised a musical that cracks open the source material to amplify its themes, using the story’s collision of misanthropy and sweetness to explore existential questions about lives stuck in neutral and the liberating power to unlock meaningful change by savoring every moment as a fresh experience.

No discredit to the show’s architects — a crew that includes original screenwriter Danny Rubin, composer-lyricist Tim Minchin, director Matthew Warchus and designer Rob Howell, the latter three reunited from the brilliant Roald Dahl musical, Matilda — but the not-so-secret weapon here is Andy Karl, continuing in a role that won him an Olivier Award in the show’s premiere engagement in 2016 at London’s Old Vic.

The Bottom Line Worth repeating.

It requires resourcefulness to take an iconic character and reshape it from the ground up. But that’s exactly what Karl does as cynical Pittsburgh TV weatherman Phil Connors, whose condescending disdain for the quaint small-town life of Punxsutawney, Pennsylvania, literally bites him in the ass as he wakes up on assignment there each morning to rediscover it’s Feb. 2 all over again.

What’s more, Karl pulls off the tricky feat of keeping us firmly in the corner of an unapologetic louse. He gives a musical-comedy performance of the highest caliber, sliding from self-centered insouciance into surprising open-heartedness, displaying a seemingly inexhaustible range of physical expressiveness along the way.

A Broadway veteran whose shows include Rocky, On the Twentieth Century and Legally Blonde, Karl is more overtly snarky here than his deadpan screen counterpart Bill Murray, and far slicker in his muscular swagger. But that makes Phil’s unraveling all the more riotous, replacing his smugness with dazed confusion and anger, then progressively with amoral self-gratification, bleakest nihilism and finally, hard-won enlightenment through humility. In one quintessentially Minchin-esque song, “Stuck,” Phil seeks answers to his predicament in a series of alternative-therapy quacks, psychopharms and religious charlatans, whose healing methods are held up for gleeful mockery. But the show in essence is an involuntary humanist spiritual quest, advocating the surrender of the ego and the embrace of selfless kindness as a path to fulfillment.

If that makes Groundhog Day sound preachy or sanctimonious, that couldn’t be farther off base. In fact, one aspect that requires some adjustment on the part of the audience (at least it did from me) is the extent to which this gentle, quirky story has been assembled into a massive, complicated package. In the frenetic first act, it almost seems as if the busy bells and whistles of Warchus‘ production, which employs five interlocking turntables, are fighting against the intimate nature of one man’s surreal journey. And the challenges of keeping such a technically complex show in motion have had their drawbacks, causing mechanism breakdowns several times during previews, including at the performance reviewed.

But even if the repetition does become wearing and the show feels overlong, there’s method in its madness. We see through Phil’s rolling eyes the crazy carnival of hyperactivity and demented cheerfulness generated by the townsfolk over a nonsensical annual tradition in which a large rodent is invited to put an expiration date on winter. Each time that marching band reappears and those cymbals start clashing, we are trapped right alongside Xanax-popping Phil in the same diabolical time warp of manic enthusiasm and aw-shucks folksiness.

Minchin’s songs, while not as immediately catchy as his work for Matilda, are rich in the customary caustic wit of his lyric writing. The locals’ eternally hopeful refrain, “There will be sun,” is juxtaposed with Phil’s sourness: “I’ve no qualm at all with your small-town people/I admire their balls, getting out of bed at all/To face another day in a shit-hole this small/All haystacks and horses where there should be golf courses.” To the show’s enormous credit, this is not a musical that sanitizes its source, but rather pushes the Scrooge-like negativity to such wicked extremes that the turnaround is all the more uplifting.

One of the most raucous songs is the twangy, country-flavored “Nobody Cares,” in which Phil meets a pair of career drunks at a local bar, Gus (Andrew Call) and Ralph (Raymond J. Lee), whose waking lives really are a never-changing hamster wheel of morning hangover, all-day boozing and smashed nightly collapse. The notion of a tomorrow without consequences sets the three of them off on a daredevil joyride, courting death on the railroad tracks without fear of repercussions.

Warchus‘ staging and Howell’s designs are at their most ingenious here, with the pieces of Gus’ pickup truck assembled around the three passengers before the scene switches to an overhead view of miniatures, with cop cars in pursuit. Howell’s design touches are delightful throughout, framing the action above and below with the tiny houses of a storybook hamlet, creating a topsy-turvy, higgledy-piggledy vision; and cleverly using the motif of a weather chart as a decor feature in restaurants, bars, inns and various other locations. 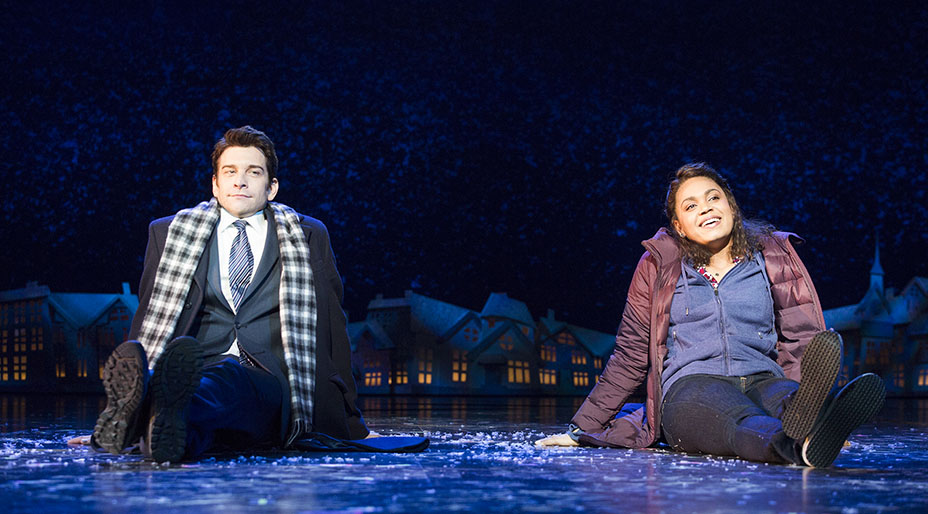 A tad too slowly perhaps, the musical broadens its perspective to reveal the philosophical nature beneath the satirical funhouse nightmare. It was an audacious structural move by Minchin to open the second act with a minor character singing an introspective meta-number. But in “Playing Nancy,” we see poignant evidence that it’s not just Phil who’s walled in and struggling to break free. As the first of Phil’s many sexual conquests, Nancy (Rebecca Faulkenberry) sings: “Here I am again the pretty but naive one/The perky-breasted, giggly one-night-stand/Is it my destiny to be a brief diversion/Just a detour on the journey of some man?”

The sense of people struggling to figure out life and endure its tests resonates even louder in “Night Will Come,” a gorgeous soliloquy sung by Ned Ryerson (John Sanders), the insurance salesman who is an object of Phil’s derision until the weatherman stops to consider the man behind the nerdy school acquaintance.

The inner life most explored is that of Phil’s producer Rita (Barrett Doss), who sings in “One Day” of the protective guard she’s erected around herself to avoid romantic disappointment. That’s the least of the reasons she remains so resistant to Phil’s charms, despite him making a little progress each day, with information he has carefully gleaned during the identical day before. But it’s only when Phil stops treating Rita as a challenge to be won and discovers instead the rewards of compassion, with acts large and small to improve the lives of people all over town, that she realizes she loves him. Right about the time he learns to love himself.

The humanizing of a heel is a story as old as time, but the miracle of what Rubin, Minchin and Warchus have pulled off here is to tell it without resorting to treacle. Things get uncommonly dark as Phil hits rock-bottom with a series of increasingly macabre suicides. These are accompanied — in what sounds like a sly pop-cultural wink to vintage Bon Jovi — by Karl belting out an ironically titled power anthem called “Hope,” built around the sardonic refrain of “Never give up.” When he shakes off that pall and springs into good-deed mode, Phil’s frantic actions unfold while a bebop drummer in a cheesy marmot costume supplies a jazzy backbeat. And the beautiful neo-folk ballad “Seeing You,” in which Phil ponders all he’s learned and all that he wants in Rita, brings a final-scene surge not of sticky sentiment but of earned emotion.

The hardworking ensemble is peppered with bright comic caricatures, along with touching insights into the human condition from Faulkenberry and Sanders. A relative newcomer to Broadway, Doss brings an appealing freshness and crisp, warm vocals to a role that feels more substantial than its movie forebear (played by Andie MacDowell). But Karl is the magic ingredient in this sour-sweet show; every time he wakes up in the chintzy hell of Howell’s B&B prison, he brings something new. That makes this musical about a guy going nowhere for a long time into a madly entertaining journey of constant change.