Given the unprecedented hype, its distinctive form and the fact that the subject is so quintessentially American, the arrival of Hamilton on the U.K.’s theatrical shores had to raise the question: Would the hip-hop history of the Founding Fathers survive its trans-Atlantic crossing?

Before the curtain rises, there are clues to an answer. The Book of Mormon (about which all of the above also once applied) is still a fixture in the West End after five years. Then there’s the common experience — as opposed to the “special relationship” — currently shared by citizens of the U.S. and U.K. regarding the fractures in each country’s racial harmony. With Brexit turning a divisive spotlight on so-called “E.U. migrants,” there’s every reason for this defiant homage to one of America’s hitherto unsung immigrant heroes to resonate in the U.K.

But the experience itself is what counts, of course. And opening at the newly rebuilt and restored, appropriately spectacular Victoria Palace Theatre, Lin-Manuel Miranda’s vibrant, vital, altogether astounding musical unequivocally holds up to the scrutiny of a new perspective. It doesn’t just survive or justify the hype, it soars above expectations.

Suddenly, even Follies — soon to wrap a well-earned five-star revival at the National Theatre — feels almost quaint. Hamilton has a breadth of ambition and a theatrical exuberance that take the breath away. In response, many in the 1,500-strong audience on press night could barely contain themselves.

The London show sees director Thomas Kail and his New York production team intact, but with an all-new, multiracial British cast onstage, resulting in a show that feels comfortably bedded in from the get-go, a confident and well-oiled machine, yet with the unmistakable frisson that comes of fresh blood. 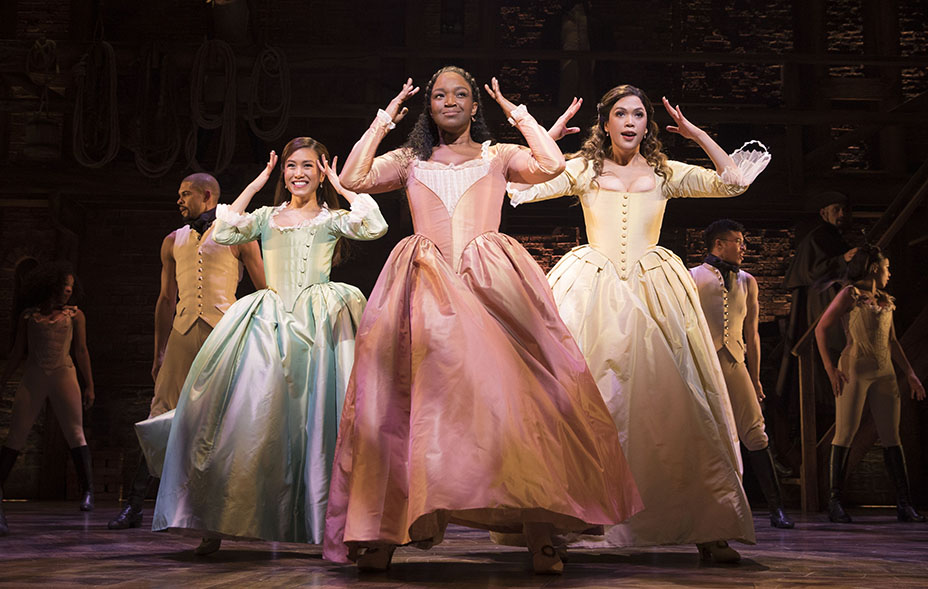 Considering that prior to Hamilton, America’s first treasury secretary was a relatively minor historical figure for most Americans, beyond his appearance on the $10 bill, most Brits could be forgiven for not knowing him at all. That doesn’t matter a jot, as the tall, handsome, charismatic Jamael Westman (recently graduated from RADA) immediately gives the Caribbean orphan, gifted writer and self-made political player a swagger and command that demand attention. The fast-forward potted biography of the opening, “Alexander Hamilton,” offers the audience an immediate and stirring opportunity to acclimatize to the time, place and modus operandi; the even more exhilarating “My Shot,” led by Westman, seals the bond.

That song establishes the “young, scrappy and hungry” hero as symbolic of his country’s desire for independence, and rap as the language of revolutionary fervor; later, one of Miranda’s many inventive touches is to employ the rap battle as the rhetorical weapon of political debate, executed with relish by Westman and Jason Pennycooke’s effete and highly entertaining Thomas Jefferson. None of this feels alienating. Indeed, in a country whose greatest playwright used iambic pentameter for the language of love, war, tragedy and much else, the fact that these characters are expressing their emotions through rap feels like a walk in the park.

The show’s hip-hop component was much-heralded. More surprising is the range of musical options Miranda employs and the dexterous way he switches styles to suit his narrative.

One stunning, bittersweet coup de theatre involves the two women in Hamilton’s life, as first we experience his meeting with future wife Eliza (the Filipino star of the recent Miss Saigon revival, Rachelle Ann Go) through her R&B love song “Helpless,” before Miranda rewinds and replays the same meeting, now through the eyes of Eliza’s sister and Hamilton’s true soulmate Angelica (Rachel John), in her rap-driven, but also heartbreakingly sung “Satisfied.”

The droll “You’ll Be Back” could almost have been plucked from a Beatles or Britpop B-side, which is appropriate given that it voices King George’s reluctant acceptance that his colony has escaped him, for now. It’s another great marriage of dramatic idea and musical style, having the figurehead of colonial oppression appear as comic relief. With Michael Jibson playing the king as a gnomish, creepily malign, barking toff whose servant-playthings aren’t doing as they’re told, the king will register very well to an audience with both a tradition of pantomime and a love-hate relationship with its royals. 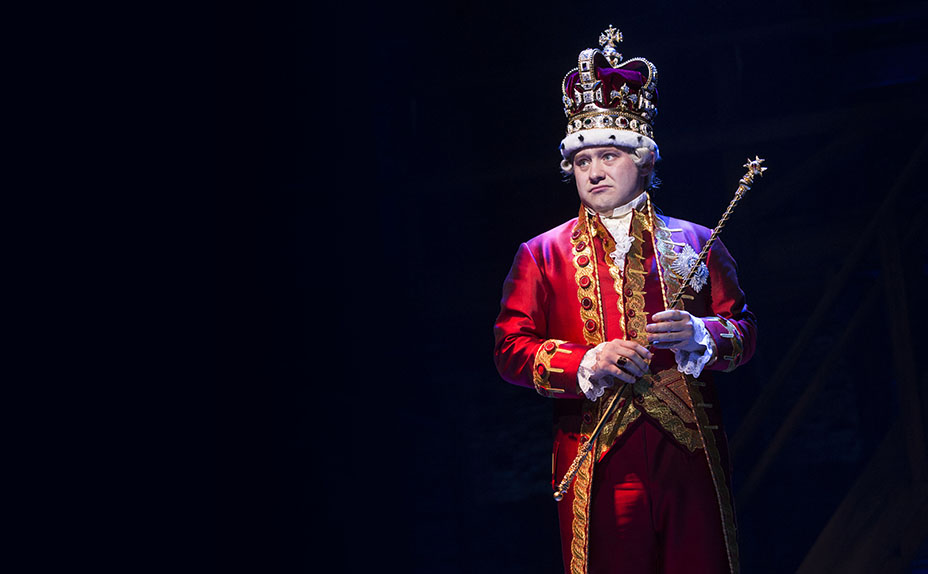 Then there are two numbers, among the show’s best, that demonstrate the complexity of Hamilton’s political rival and nemesis, Aaron Burr (Giles Terera, ably escaping the shadow of Tony winner Leslie Odom Jr). “Wait for It” is a gorgeous ballad that paints the man who kills Hamilton more as tragic villain than mere rascal, while “The Room Where It Happens” is a jazzy, extremely catchy show tune describing his frustration at being shut out of the decision-making that is shaping the country.

Part of the musical’s universality is the way in which Miranda taps into a growing fascination with the mechanics and machinations of politics. Indeed, his hero’s part in the first political sex scandal again demonstrates that this historical tale is never short of contemporary resonance.

David Korins’ original set remains, with its wooden gangways and staircases, ropes and pulleys against a high brick backdrop, and the revolving circle in the stage floor that contributes so much momentum to Andy Blankenbuehler’s choreography, whether it’s fight scenes or the introduction to the art of the duel. History buffs would find extra excitement in the costume design, not least when the red tunics of the British soldiers are bathed — counterintuitively and highly effectively­ — in red light.

The performers, most of them relatively unknown, appear unfazed by the show’s repute or its considerable technical demands. Putting across one astonishing song after another, they present as an engaging and talented unit.

And while Miranda’s reimagining of the formation of his country has reasserted the importance of immigrants to the U.S. national identity, the musical’s U.K. casting carries its own political value. To see such diversity on the West End stage right now is as satisfying as having a working-class British-Pakistani — Donald Trump adversary Sadiq Khan — as London’s mayor. The revolution has landed in London, and is unlikely to be leaving any time soon. 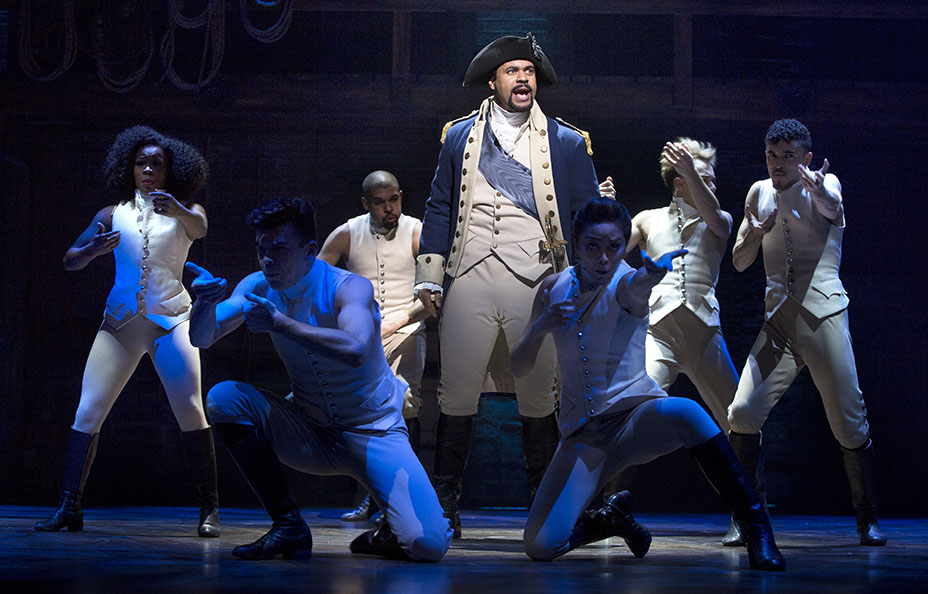