In his boxy three-piece suit, stubby mustache, bowtie and bowler hat, Mark Addy looks more like a portly comedic figure in the Oliver Hardy vein than Britain’s second-most-famous executioner. But his character, Harry Wade, is all business when it comes to pulling the trapdoor lever and sending a condemned man to his death. Although the chip on his shoulder — the gnawing professional jealousy at odds with his windy self-importance — threatens to be Harry’s undoing, playwright Martin McDonagh has far more sinister challenges in store for him in Hangmen, a delectably dark comedy about injustice, revenge and man’s instinct for violence, state-sanctioned or otherwise.

While the mood here is generally more playful, shadowed by an unnerving streak of menace right out of Harold Pinter, those bristling themes make this expertly crafted play a lively companion piece to McDonagh’s Three Billboards Outside Ebbing, Missouri. The awards-season attention around that film makes it good timing for the New York premiere of Hangmen, in a production first seen at London’s Royal Court in 2015; it returns the Anglo-Irish playwright to the Atlantic Theater Company, which has had notable successes with his work in killer stagings of The Beauty Queen of Leenane, The Lieutenant of Inishmore and The Cripple of Inishmaan.

The Bottom Line The very definition of gallows humor.

Those earlier plays all took a scabrously funny view of regional Ireland, and McDonagh’s humor has lost none of its uniquely vinegary tang with the shift to England. That’s apparent from the punchy opening scene, a 1963 prologue in a prison cell where Harry and his stammering assistant Syd (Reece Shearsmith) have been summoned to end the life of one James Hennessy (Gilles Geary), convicted of murdering a girl on a beach in Norfolk. In a state of high agitation, Hennessy protests his innocence until the bitter end, though it’s his digs at Northerners and his complaint that the court could have sent Britain’s more revered executioner, Albert Pierrepoint, that test Harry’s patience. “If you’d’ve just tried to relax you could’ve been dead by now,” Syd cluelessly advises the condemned man.

Establishing the macabre tone that runs through Matthew Dunster’s taut production, that scene deftly balances farce and horror up to and beyond the sickening thud of Hennessy’s body dropping on a rope to his death. The gruesome spectacle is made all the more startling by Anna Fleischle’s grimy set, Joshua Carr’s merciless lighting and Ian Dickinson’s unnerving sound design, which echoes with banging prison doors and buzzing lights as the scene moves ahead two years to the old-fashioned Lancashire pub run by Harry and his missus, Alice (Sally Rogers). 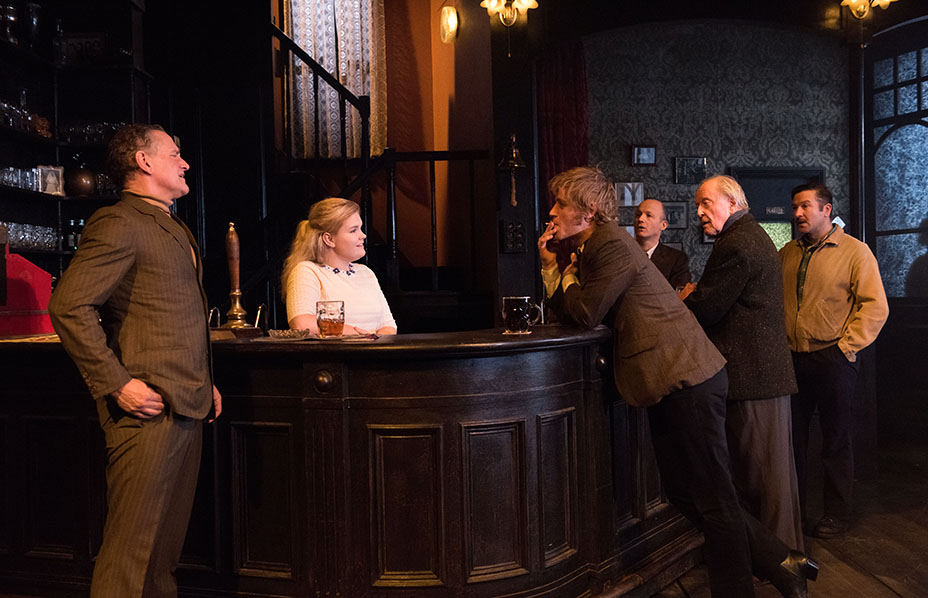 That setting — superbly detailed down to the smoke-stained wallpaper, dingy lighting, shabby furniture and the hulking wooden bar that dominates the room — recalls Conor McPherson’s 1997 drama, The Weir. The rural pub in that play served as the scene of everyday banter and swapped stories that mushroomed into haunting supernatural yarns. Death crops up often in McDonagh’s barroom chatter, too, though the ghosts of Hennessy and other unfortunates convicted on sketchy evidence are present chiefly in the refusal of Harry and his fawning cronies even to consider that their executions were unjustified.

“Hanging’s too good for ’em. Cos it is. Int it?” offers Bill (Richard Hollis), one of a trio of half-sozzled regulars that pontificate over a pint, or several, along with idle police inspector Fry (David Lansbury). On one hand, McDonagh is having fun with the freedom of pre-PC England to air his characters’ unapologetic prejudices without inhibition — Northern Brits take the most flak, but black immigrants, Americans, the French, the Scots and particularly the Germans all are targets of droll swipes. On the other hand, the mid-’60s time frame allows the playwright to depict a climate of rigid moral superiority, where people are unaccustomed to having their conservative values questioned. “Sacrosanct” is a word that pops up repeatedly, and McDonagh takes devious pleasure in piercing the inviolate bubble of his characters.

Harry is especially resistant to self-reflection, glaring down at his beer taps whenever anybody hits a nerve. An opinionated man, he takes great pride in having always remained silent on the subject of hanging, which makes him a reluctant interviewee when young reporter Clegg (Owen Campbell) comes sniffing for a quote the day Britain abolishes the death penalty. But Harry’s vanity gets the better of him when Clegg mentions his famed rival Pierrepoint (a real-life British hangman responsible for at least 400 executions), prompting him to expound at length and with minimal humility on his years as a servant of the Crown.

The resulting two-page newspaper spread inevitably attracts attention, but it’s the arrival of a shady outsider from London that first ruffles Harry’s composure. From the moment Peter Mooney (Johnny Flynn) walks into the pub, ordering a pint of lager and a bag of peanuts, his understated mod wardrobe and dirty-blond mop top set him apart from the locals. But it’s his supercilious manner that makes Harry take an instant dislike to him. 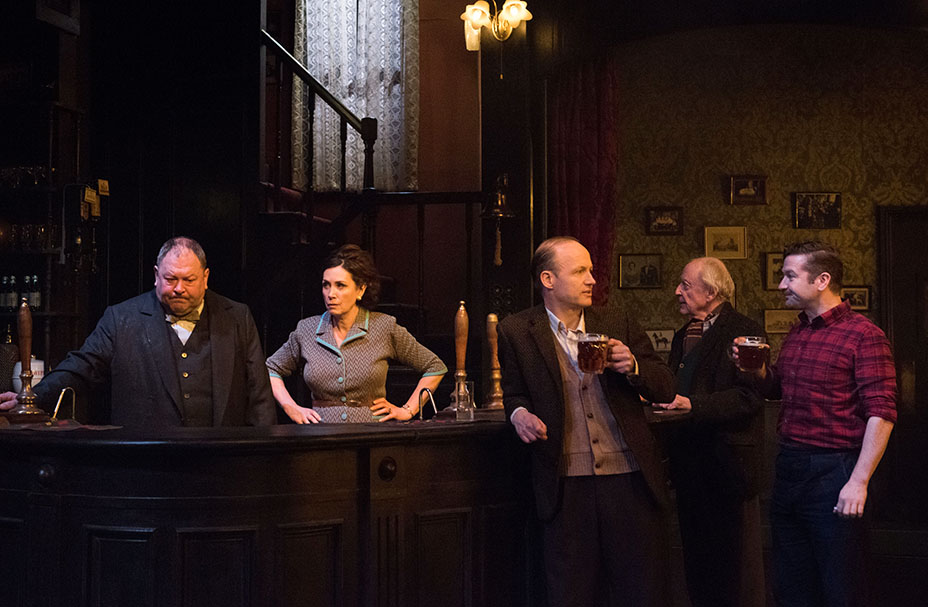 Just as McDonagh toys with the word “sacrosanct,” another key word is “menacing,” a label Mooney says is often attached to him, but one quite distinct from “creepy,” he’s quick to point out. Alice initially misses that undertone as he inquires about renting a room. Even more oblivious is the Wades’ dumpy 15-year-old daughter Shirley (Gaby French). Mooney’s insinuating charms prove a tonic for the girl compared to her parents’ criticism of her mopey shyness. But when Shirley goes missing, panic ensues, escalating once Syd comes out of the woodwork, again raising doubts about Hennessy’s innocence while casting Mooney in a suspicious light.

After veering toward insubstantial self-parody with his last new play, 2010’s A Behanding in Spokane, McDonagh is back in top form here. The first act’s teasing set-up deftly suggests all sorts of nasty outcomes and then the second act cleverly dismantles most of those expectations in a multi-character confrontation that gets messy in unpredictable ways, abetted by Dunster’s crafty blocking. If the later plotting becomes less precise, the dialogue — the majority of it in flavorful Northern English vernacular — crackles, the running jokes are devilishly good and the characters are incisively drawn, providing choice fodder for an electric ensemble.

Three of the actors are holdovers from the London run. Shearsmith’s Syd is a hilarious fool with a festering grudge; the rehash of his dismissal from the hangman’s employ, and his subsequent shaming, generate some of the play’s biggest laughs. With her sinking bouffant and regulation-’60s makeup, Rogers is the essence of the spouse weary from too many years propped against a bar, every eye-roll at her blowhard husband accompanied by a sip of gin. (Designer Fleischle, who did the costumes as well as sets, amusingly suggests Alice’s starved sensuality by having her emerge from upstairs for an interview with Mooney, packed into a classic twin-torpedo period bra that enters the room ahead of her.) And Flynn is a breakout discovery as Mooney — coolly insouciant, with a fiendish touch of Joe Orton rudeness. In fact, if there’s a structural weakness it’s just that Flynn’s bad-boy charisma leaves such an impression we feel the loss of that dangerous energy in Mooney’s absences from the action.

Other standouts in the uniformly strong cast include French, who makes Shirley’s loneliness sweet and touching; John Horton as an old barfly who invigorates a string of potentially hoary deaf jokes; and Maxwell Caulfield, who drops by late as a surprise visitor to put Harry in his place with a stinging monologue. The beauty of Addy’s robust characterization is that even when the air is let out of Harry’s belligerent self-inflation, uncomfortable truths are beyond him — though McDonagh does allow him a brief moment of tenderness with Alice. He’s an irresistible antihero in an acerbic portrait of England, untroubled by conscience.