Actor Andrew Scott and director Matthew Warchus have collaborated once before, on film, for the gay-themed ensemble comedy Pride. The movie was nicely made and touching, but no preparation for the pair’s first play together, Present Laughter, which is nothing short of sensational.

Some strategic tweaks to gender and denouement offer a version of Noel Coward’s famous comedy that the playwright himself might have produced, were his own time more tolerant. This feels like an honest, even profound reflection on the price of fame, with some genuine sexual frisson and an undercurrent of pathos that serves the play’s original title, Sweet Sorrow.

After 'House of the Dragon,' Will Warner Bros.' World of Westeros Fly or Fail?

The Bottom Line Sparkling and profound.

Yet at the same time, Warchus loses none of the sparkle and wit that makes the play such a perennial favorite (last revived on Broadway in 2017, it won a Tony Award for Kevin Kline). His production at The Old Vic carries the audience along in a reverie of non-stop, full-throttle hilarity. The result is at once frothy and deep, rip-roaring and sad. And quite a triumph.

Scott plays Garry Essendine, a famous matinee idol who, when not onstage, appears to be trapped in his London apartment, half-dressed, as one would-be lover after another comes to call — some succeeding in getting into his bed, though quickly cast aside the next morning. Garry’s close-knit confidantes watch in dismay, namely ex-wife Liz (Indira Varma), manager Morris (Abdul Sarris), producer Helen (Suzie Toase) and long-suffering secretary Monica (Sophie Thompson). On the eve of a long tour to Africa, they decide to read Garry the riot act.

Garry, a drama queen whose motto, “I belong to the public,” only applies to those he wants to sleep with, feels that he’s doing nothing wrong at all. To be fair, he’s quite justified in gauging the hypocrisy of his friends, whose own sexual misconduct threatens to disrupt the collective theatrical gravy train far more than his. 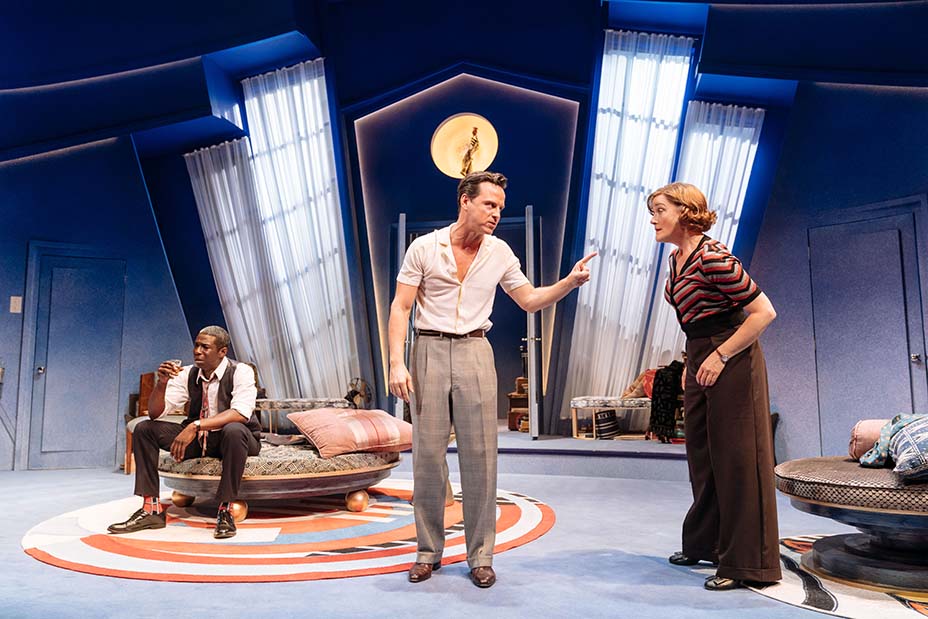 The setting throughout is Garry’s studio, a tasteful art deco affair, with strategic doors on all sides and moldings that seem to form a pair of axes — no doubt ones that Garry, in despair at turning 40, feels are hanging over his head.

It’s a perfect setting for what plays, fundamentally, as a farce, with a revolving door of old flames and stalkers, characters frequently despatched to the trusty “spare room,” and a chain of fainting, swooning romantic clinches and exaggerated protestations.

But beneath the frantic surface is a subtle depiction of a man trapped by fame and his own image. In a way, Garry has created his predicament. He eagerly milks melodrama, hammily proclaiming his misfortunes, namely of being in perpetual service to his entourage. And having “acted” for so long offstage, he’s reached the point where no one is willing to believe him when trying to be himself.

A suggestion of what that other self might be is offered by Warchus’ gender switch of two key characters. Garry’s producer Henry Lyppiatt and his cheating wife Joanna now become Helen and her husband Joe (Enzo Cilenti). And it’s now Joe who creates havoc by having affairs with both Morris and, more importantly, Garry.

Could it be that not just young flings like Daphne (Kitty Archer) but also Garry’s more serious love, Liz, are merely diversions, a necessary maintenance of the matinee image? And could this be why Scott eschews Garry’s (and Coward’s) trademark dressing gown — casting away a piece of the playwright’s own constructed image for this new view? 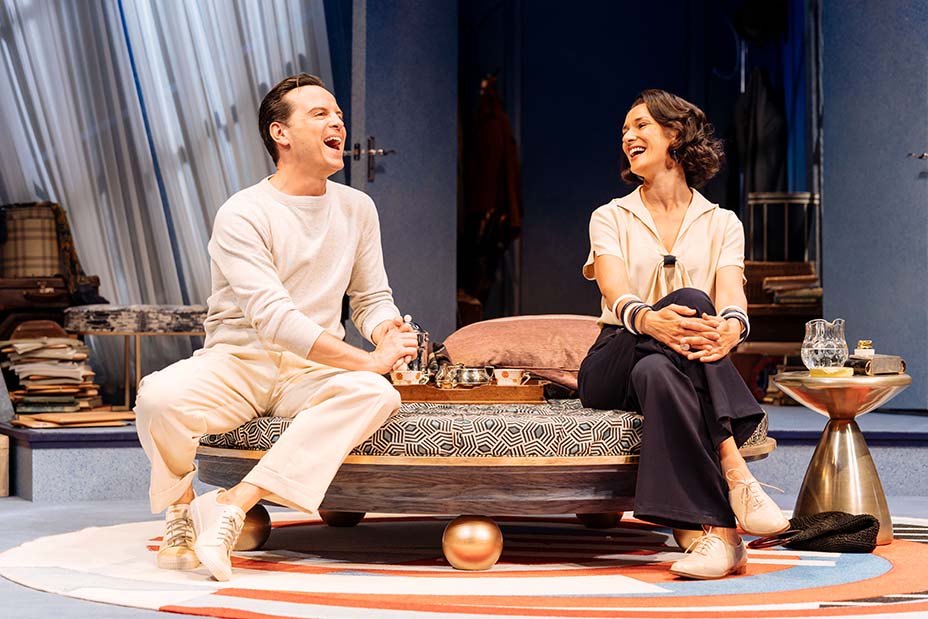 Meanwhile,  the production is as hilarious as one could wish it to be, if not more so. And much of the credit for that goes to the phenomenal whirlwind of a performance from its star.

Scott brings a great deal of his acting arsenal to the table: the cute vulnerability of Fleabag‘s Sexy Priest, the dark-browed malevolence of his Moriarty on Sherlock, the dangerous charisma of his rock star — a man also wrestling with fame — from the play Birdland. And there’s even something of the hammy splendor from Hamlet — not of his title performance, but of the traveling players the prince so admires.

But most of all, Scott simply gives Coward’s language the most fulsome, zesty, haughty champagne fizz. There isn’t a single line left flat. And the delivery is matched by physicality; this Garry simply can’t keep still, whether constantly rustling his hair, waving his hands through the air to accentuate his thespian angst or, in one blissful moment, pirouetting as he struggles to keep up with the chaos around him.

The other actors ensure they’re not sidelined, each at one time or other bringing down the house. Special praise to Thompson, whose Monica is a slightly matronly Scot with glorious put-downs and a genuine love for her employer; Luke Thallon as the impossibly cheery stalker Roland Maule; and Liza Sadovy, gloriously scene-stealing both as the Swedish spiritualist maid Miss Eriksson and Lady Saltburn, normally a walk-on extra who now has the crazed impact of Peter Sellers’ Dr. Strangelove.

Varma, who may be one of London’s most underrated stage actresses, is typically classy and authoritative as Liz, more than able to sustain the time she spends sitting quietly on the sidelines observing, not being drawn into the hysteria around her.

When it comes to Warchus’ second major intervention — a really quite daring change to the expected tempo of the denouement — Varma and Scott suggest the world of sadness and loneliness that comes from being too long centerstage, leaving this most effervescent of experiences on a tender, poignant, truthful low.