What better way to clear both the physical debris and the festering rancor of a messy birthday party than with a detonator and a stash of Semtex to cap off the more traditional fireworks? Yet despite the many explosive crescendos, gunshots, volatile meltdowns and farcical entanglements that punctuate The Present, it’s the melancholy aroma of regret — over bad choices, blind complacency and irreversible consequences — that perfumes the air in Andrew Upton’s vigorous reworking of Chekhov’s baggy first play, Platonov.

The headline draw is the incandescent chemistry between Cate Blanchett and Richard Roxburgh, both superb, playing characters whose dissatisfaction spreads like contagion among the guests. But this Sydney Theatre Company import is also a compelling ensemble portrait of people “trapped in loveless lives,” suspended between a past of illusory splendor and a compromised future in which the new order will leave many of them in the dust.

The Bottom Line A tart tragedy, infused with corrosive humor.

What’s most surprising about John Crowley’s expertly calibrated production is how funny it is, while remaining true to themes of disillusionment, class breakdown and unfulfilled love that would find more articulate expression in Chekhov’s later, better plays. It also exemplifies the “Chekhov’s gun” principle to the letter, starting with a sly wink in the play’s opening moments.

Upton has traded pre-revolutionary Russia for the post-perestroika nation of the mid-1990s, with the rise of the oligarchs finding effective echoes in the shift to the right and the concentration of wealth and power in our contemporary world. The play is written and performed in a relaxed Australian vernacular that adds immeasurably to its ease and immediacy, even if the first of the three-hour production’s four acts is tough sledding, requiring close attention to keep straight the identities and connections of everyone onstage. But the unhurried approach pays off as wine and vodka are consumed, truths aired and polite formalities dropped.

The occasion is the 40th birthday of Anna Petrovna, played by the extraordinary Blanchett as a coltish beauty whose effortless command doesn’t exclude the odd invigorating note of blasé vulgarity. The once-wealthy widow of a formidable man referred to only as the General, she is now forced to contemplate an opportunistic match with one of her late husband’s crusty contemporaries — either the benign retired lawyer Alexei (Martin Jacobs) or the more chilly businessman Yegor (David Downer), the latter flanked by his circumspect son (Brandon McClelland) and his thuggish muscle (Andrew Buchanan).

The suitors’ government connections will enable Anna to reap income from natural gas mines on her property. Except that while playing the two men off against one another, Anna grows distracted, extending her manipulative games to her guests. That group includes the General’s son from his first marriage, the desperately ingratiating Sergei (Chris Ryan), justifiably concerned about the affections of his wife Sophia (Jacqueline McKenzie); and Nikolai (Toby Schmitz), a cocky young doctor ambivalent about marrying his student girlfriend Maria (Anna Bamford), a lightweight who goes to great lengths to point out her extreme seriousness. (Watching Anna wrap Maria around her finger is a delicious high point.) Sergei and Nikolai are close in age to Anna, who both encourages and disdains their quasi-filial regard for her. 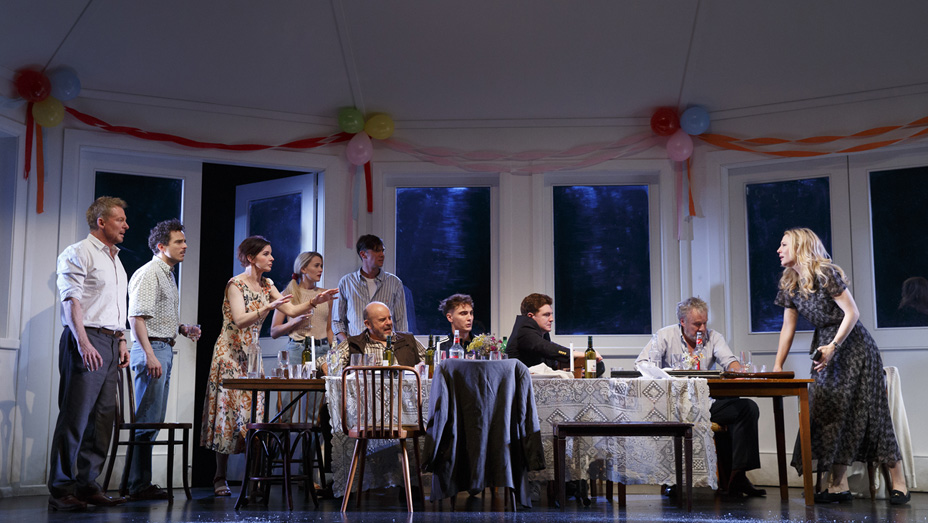 Upton (Blanchett’s husband, and until recently, artistic director of STC) shifts the play’s center of gravity to favor Anna, but the traditional lead character, Mikhail Platonov (Roxburgh), firmly occupies that space alongside her. The former tutor of Sergei and Nikolai, back when he was an impassioned aspiring writer, he’s now a disappointed idealist, tempering his sourness by juggling four women. In addition to his wife Sasha (Susan Prior), an endearing lump whose silly, flouncy frock does nothing to hide her post-pregnancy weight, Mikhail also has a history with the still-smitten Sophia and a strong mutual attraction to Maria. He claims, with the world-weary self-delusion of an unapologetic womanizer, to love them all, but Anna is clearly the torch that burns brightest, a feeling that cuts both ways.

The production’s thrilling centerpiece is the tail end of the birthday meal in a summer pavilion on the estate, which is winding down as the second act begins. As Mikhail blathers on, indirectly venting his disgust at the world and himself, Anna becomes dangerously bored. Blanchett channels that impatience into a marvelous physical display of fidgety energy, her restlessness primed to erupt, which it does, in a debauched bacchanal set to the cheesy ‘90s dance hit “What Is Love.” Anna’s abandon gets misread as nihilism by Alexei’s son Kirill (Eamon Farren), a DJ just back from Paris who’s the epitome of Euro-trash entitlement. But her disillusionment runs deeper and darker, fueled by the retreat of her youth.

“It’s so hard to do what you really, really desperately want in life,” muses Anna. “It’s so much easier to do shit you don’t care either way about.” Upton laces the play with similarly flip-sounding reflections that go beyond merely putting a modern gloss on Chekhov, honoring the playwright’s intentions with more bite than this unwieldy work might otherwise provide.

While Anna veers wildly between recklessness and careful control, Mikhail sinks further into inescapable emptiness in an otherworldly third act, staged by designer Alice Babidge as if in a smoke-drenched purgatory where he marinates in vodka and self-loathing. A fiercely charismatic stage actor who offsets Mikhail’s bitterness with a louche air of mischief, Roxburgh is riveting in this long series of exchanges with the other characters, still toying with them even as he embraces his own sense of hopeless defeat.

His performance is a scintillating match for Blanchett’s, with her willowy grace, her playfulness and bursts of febrile intensity, not to mention the supple modulations of that seductive voice. The two actors have worked together frequently over the years, dating back to a celebrated 1994 Hamlet, and watching them together is mesmeric, whether they’re skirting around unspoken sorrows or plastering a sardonic veneer over their unhappiness.

The entire company of 13 has been with the production since it debuted in Sydney in 2015, and that commitment shows both in the depth of the individual characterizations and the sparks of their interactions. While there’s not a weak link in the ensemble, I particularly enjoyed McKenzie’s increasingly single-minded Sophia; Prior, bringing puppy-dog devotion to Sasha; Jacobs’ wistful Alexei; Marshall Napier, amusing as the boozehound father of Sasha and Nikolai; and Ryan as Sergei, a meek, uninteresting man painfully aware of his own dullness. Weaving together these characters and their hollow lives in a context that connects them both to Chekhov’s Russia and to our own uncertain world, Upton, Crowley and this accomplished company have elevated a problematic play into something unexpectedly satisfying.