With the unequivocally titled Revenge, newcomer Coralie Fargeat gains instant entrée into the halls of Gallic extreme horror in the vein of Haute Tension and Inside. Genuflecting to the giddy exploitation delirium of I Spit on Your Grave — right down to calling the protagonist Jen — this is a rape retaliation thriller both tautly controlled and wildly over-the-top, executed with flashy style, sly visual humor and a subversive feminist sensibility. Acquired by AMC’s Shudder streaming service ahead of its Toronto bow in the Midnight Madness section, this mostly English-language pop-art carnage opera will make genre fans squeal and squirm.

Fargeat from the outset signals her darkly playful take on the “video nasty” rape-thriller subgenre. An early shot from ace cinematographer Robrecht Heyvaert starts with an epic desert landscape then cuts back to reveal that widescreen vista in the lens of aviator sunglasses worn by Richard (Kevin Janssens), a handsome dude exuding smugness from every pore. Over his shoulder, about to alight from the chopper that brought them there, sits Jen (Matilda Lutz), a sex kitten with a uniform of crop tops, short shorts and plastic star earrings, sucking on a Lolita lollipop.

The Bottom Line A hunting party from hell.

Their destination in an unnamed country (Moroccan locations were used) is an isolated luxury pad, full of aggressively modern statement art like a pair of all-seeing optical eyes and a doleful green Madonna, her hands raised in supplication. Production designer Pierre Queffelean has a field day with the house, its neon-colored glass terrace doors providing woozy filters and its white sectional sofas and shag rugs practically begging for a bloodbath.

Following a tumble in the sheets, Richard reveals how casually he deceives women by taking a call from his wife back home, presumably in France, praising her finesse at choosing the right canapés for a gathering of society heavy-hitters while claiming he’s enjoying some alone time before his buddies show for their annual hunting trip. Jen pouts for a minute, but is soon back to flouncing around the house in a teeny, hot-pink I Love L.A. T-shirt and a thong with all the coverage of dental floss. She’s a magnet for ass-grabbing. 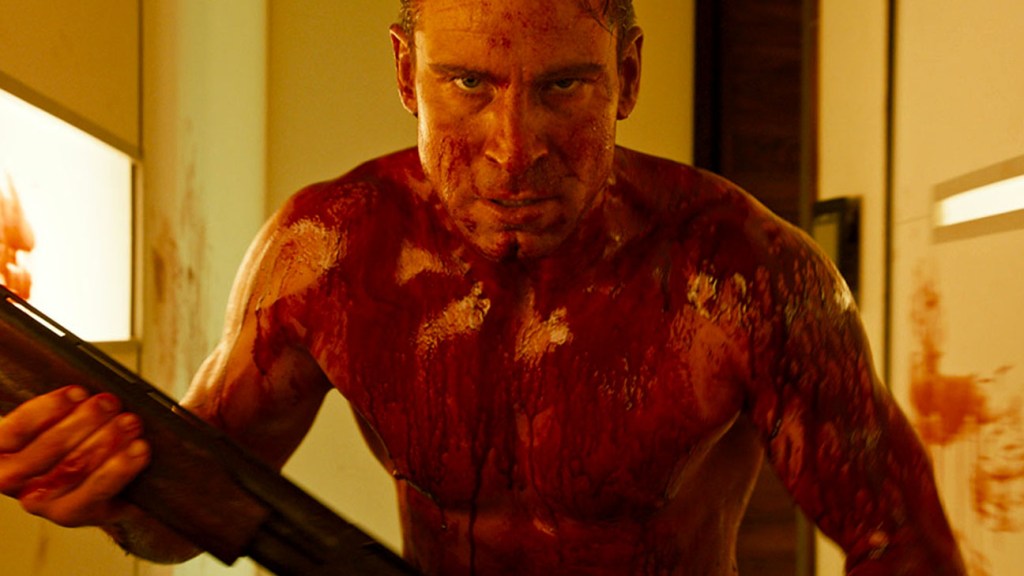 The early arrival of Richard’s skeevy friends, Stan (Vincent Colombe) and Dimitri (Guillaume Bouchede), puts a crimp in the romantic mood, but Jen shrugs off their thirsty leering and gets into the party spirit with some provocative dancing out by the pool that night. The next morning, with Richard off seeing to their hunting licenses, rodent-like Stan wants the party to continue. He won’t take Jen’s “No” for an answer, especially after she makes the mistake of belittling his height.

Fargeat establishes early on that she has no use for subtlety, with shots of fire ants crawling over a rotting apple, or a pool-cleaning device that’s like a lurking reptile. The most obscene image is the chocolate marshmallow treat being obliterated in lard-ass Dimitri’s mouth as he takes in Stan’s violation of Jen and then walks away, turning up the TV to drown her screams. When Richard returns in the wake of all this, he offers Jen not comfort but compensation, and her threat to spill the beans to his wife and ruin him makes him turn ugly.

The less revealed about what follows the better, but the extent to which Jen is considered a disposable chattel is quite breathtaking — literally so when her near-death involves another kind of violent penetration. However, the three men don’t count on her phoenix-like rebirth, which Fargeat orchestrates not as a supernatural feat of zombification but the result of a fierce human survival instinct, with reserves of strength and mental focus that no amount of blood loss can extinguish. Some resourceful self-surgery involving a beer can, cigarette lighter and a peyote painkiller also helps.

About that blood: The sheer volume of red goop escaping each body as Jen turns the tables on her attackers while they separate to hunt her down goes outrageously beyond the boundaries of reality. Fargeat acknowledges that with a brazen wink, thumbing her nose at credulity as her naive Barbie-doll heroine becomes a vengeful, quick-thinking terminator, like a desert snake shedding its skin for greater speed. If Jen’s presentation of herself as a sensual plaything means the men feel entitled to objectify and dehumanize her, their macho posturing as hunters in a rugged land makes them fitting prey once she finds her wounded-warrior mojo.

The gripping cat-and-mouse game builds to an inevitable final showdown between Jen and Richard back in the house, its maze of white halls awash in blood. In a droll touch, Richard is fresh out of the shower and naked throughout the ordeal, making for equal-opportunity ass exposure.

Shot with muscular agility, sizzling colors and lots of virtuoso tracking sequences, and fueled by a ballsy techno score in the John Carpenter/Dario Argento tradition, Revenge is nothing if not relentless. Those who go with its splashy, Grand Guignol theater of death will have a vicious good time. Will it stoke the usual arguments about graphic violence in response to rape being just another form of exploitation? Sure. But having a woman at the helm for once also gives a certain license for excess, and Fargeat and her game actors run with it.