Reese Witherspoon shows off her Southern sweetness and sass in her new book Whiskey in a Teacup. Part cookbook, part memoir, the tome reflects on “what growing up in the South taught me about life, love and baking biscuits.”

Witherspoon paints a picture of quaint Southern life before the Hollywood lights, porch swings, sweet tea and Dolly Parton included (and she admits okra is still her favorite vegetable). The book, packed with nostalgia, is a love letter to her childhood and the state of Tennessee. She sprinkles in family recipes, road trip games, lists of Southern books and movies, and Southern pronunciations.

Though Whiskey in a Teacup does divulge some about her working life as Draper James lifestyle guru and the female empowerment message behind her company Hello Sunshine, it’s mostly a reflection on how women, as her grandmother says, are like whiskey in a teacup — ornamental on the outside and fiery on the inside. The pages reflect that spirit, blending homemaking tips with personal stories of hard work and life lessons, leaving the reader daydreaming of an invite to Witherspoon’s Christmas caroling party or wishing she’d help plan their bridal shower. Here are 14 takeaways from the actress and producer’s memoir. 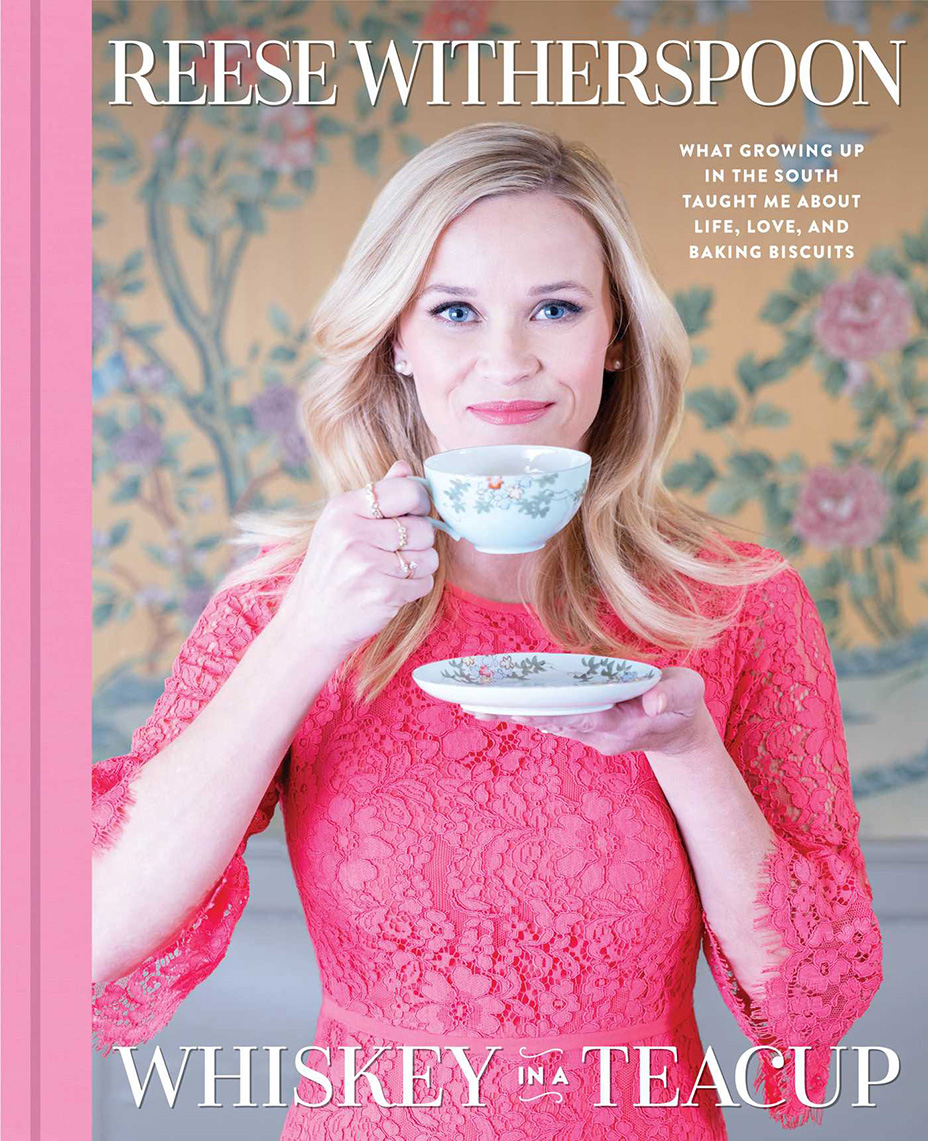 1. Her best acting advice is to watch Steel Magnolias.

“I’m all for acting classes and camps, coaches and mentors. But if you don’t have access to any of those things and want to study acting, there is good news: You can learn all you really need to know about acting from repeated viewing of the beauty salon scene in Steel Magnolias,” Witherspoon writes of the 1989 film with Sally Field and Julia Roberts alongside Parton. “Study it well and I guarantee you will improve your craft.”

She says the women are all fully drawn out characters. The dialogue is fast and complex, while the scene includes distinct motivations, complex relationships and emotions ranging from hatred to love.

“So much happens in that 11-minute scene (yes, I’ve timed it) that I am always in awe. You realize that scene must have taken three days to shoot — and was worth every second. Those few minutes manage to showcase the beauty of Southern female friendships and how important beauty shop politics are — and the scene even advances the plot,” Witherspoon says.

She declares, “If each of those women is an instrument, that scene is a symphony!”

2. Parton helped Witherspoon with her award-winning performance in Walk the Line.

Parton, to Witherspoon, is “the ultimate Southern icon.” She grew up telling teachers she wanted to be Parton when she grew up. Her father was a surgeon in Nashville, and when some of his patients heard Witherspoon was playing Johnny Cash’s wife, they sent videos and pictures to help her be authentic.

“One of those generous people was Dolly,” Witherspoon says. Parton reached out and offered to meet and help Witherspoon prepare for the role: “I was over the moon.”

“She picked me up in her car. One of her cousins was driving us. And we went to a three-hour dinner. She told me stories from her life in country music and so many things she knew about the Carter family and especially Johnny Cash. She was incredibly generous with her time and her experiences, which really helped inform my performance. More even than the great insights she had, she gave me courage.”

Witherspoon says they have kept in touch “and she’s remained a very caring and supportive figure in my life.” She even asked permission to use the insignia “What would Dolly do?” for her lifestyle brand Draper James, named after her nieces.

“She continues to inspire me to no end,” Witherspoon gushes. “Beyond being a fabulous entertainer, she’s a wonderful person.” 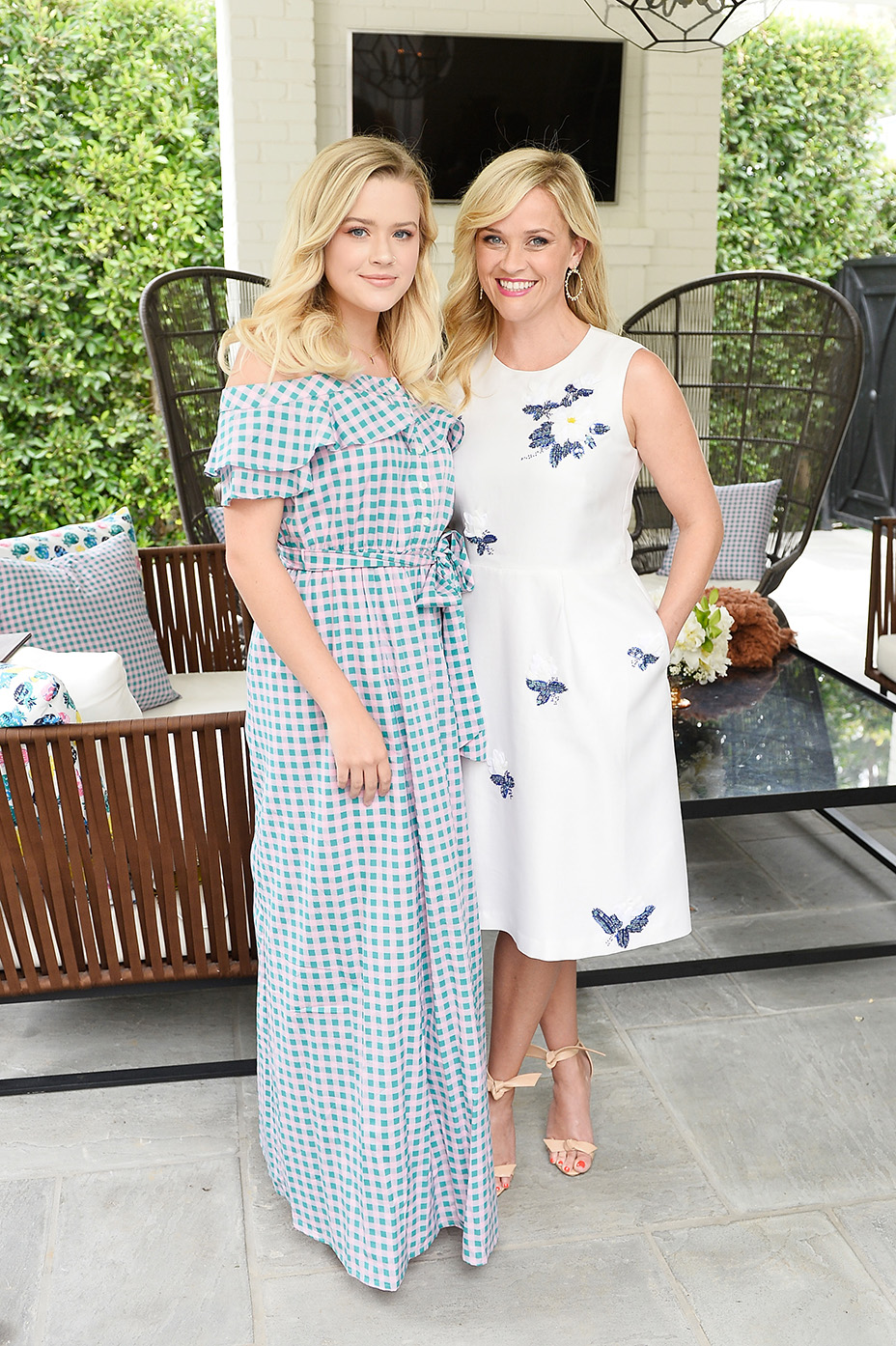 The annual holiday bash includes biscuits and ham, natch. Musicians (it’s left up to the imagination who exactly) play her piano and everyone sings the classic songs. Neil Patrick Harris once got the honor of singing the “five golden rings” solo in “The 12 Days of Christmas,” and he was “the best” soloist she’s had. Kate Hudson is a close second, Witherspoon says: “She sings like the best bluesy lounge singer in the land.”

Her husband remarked, “I’ve never seen you this excited” on the day Witherspoon met Kate Middleton. That day, she woke up at 4 a.m. to prepare. “I love Kate Middleton that much.”

Middleton was in town for an L.A. fundraiser: “The scream that issued from the lips upon receiving [the invitation] — you would have thought I was going to die.” Witherspoon calls her warm, elegant and composed as she told a joke, and “I immediately fell under her spell.”

Why the fangirling? “Southern women like how the royals value family and how they’re always doing good for others,” Witherspoon writes. “I felt relatively immune from the obsession with the royals until a few years ago when I was invited to meet Kate Middleton.”

5. She went to the Catskills and learned she wasn’t a singer.

At age 13, Witherspoon began entering Nashville acting and singing competitions; though she won for acting, she could not sing (bless her heart). She continued to sing despite the feedback. Then she went to the Catskills for a camp for Broadway wannabes. “I was soon told the following: ‘You … in the front … Yes, you … please stop singing. Acting is your thing; focus on that.’ I finally accepted reality.” She would go on to win an Oscar for Walk the Line and be nominated for another in Wild.

6. She opens up about her wedding.

The star reveals details about her second wedding to Jim Toth, saying they married at her house, a “beautiful” working farm with chickens, dogs and goats. She was getting ready in the farmhouse with her friend Heather, cracking jokes, when they later realized children were sitting on her veil, eating crackers and getting crumbs everywhere. “Heather and I cracked up. Let’s face it, folks — life is not a perfect tableau. So just brush off the crumbs.” 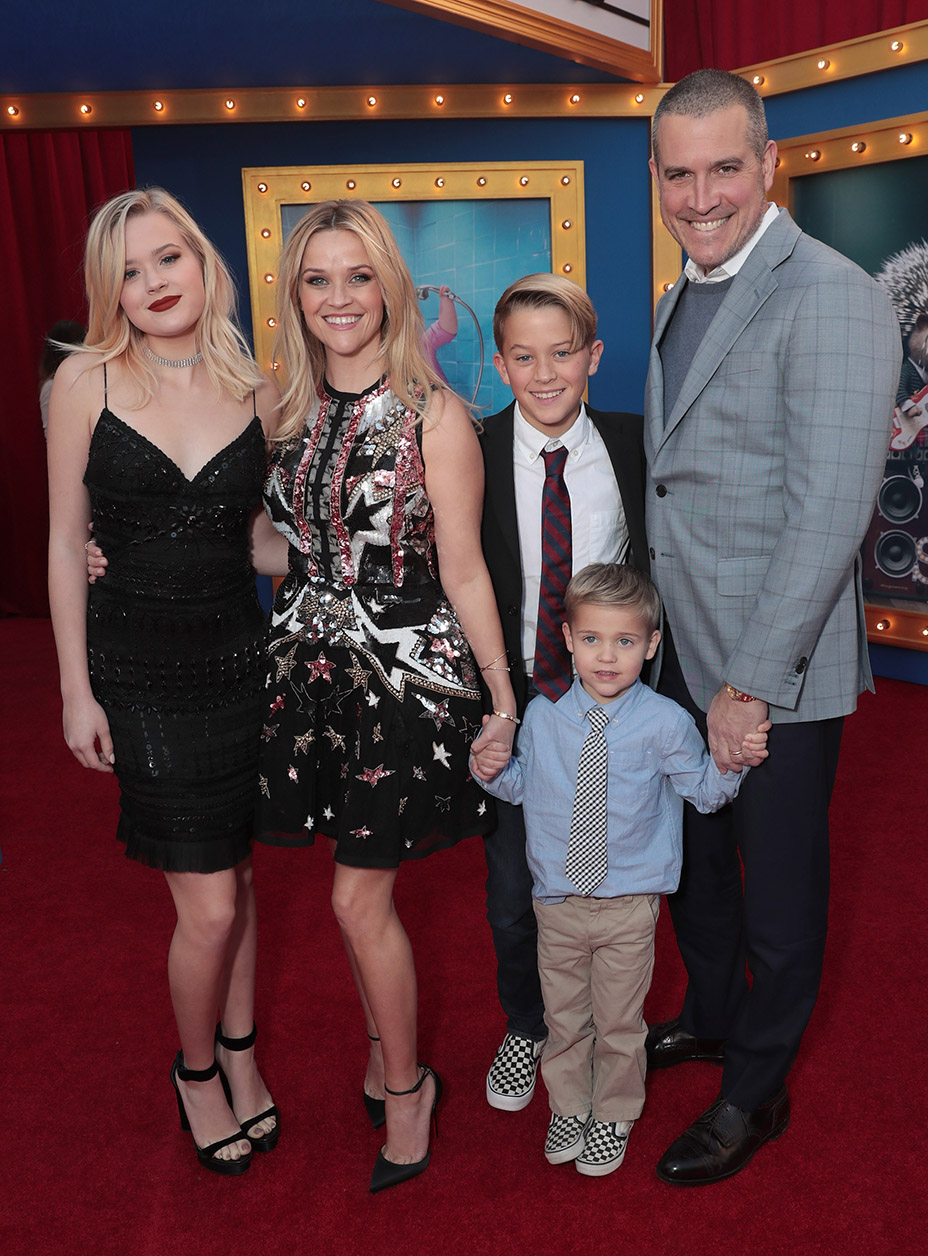 7. If you invite Witherspoon to your wedding, she will give you a cake plate.

“When I need to give a wedding present, I’m not usually that creative,” she says. “In fact, I always give the same thing: a cake plate. Always, always. Because you know what? Cake plates remind you of fun times and good things. No one is depressed when they see a cake plate.”

8. She only knows how to style her hair with hot rollers.

She then passes on the wisdom, explaining you apply mousse, roll hair into heated curlers, clip them down, get in the car and drive where you want to go (“pro-tip: roll down the window to let the outside air cool the rollers”). When you arrive, take out the rollers, flip your hair down, brush upside down and spray with hairspray.

9. She had a real Elle Woods moment, showing up in costume to an adult party.

Yes, the iconic scene really happened. In Legally Blonde, her character Elle attends a party that she’s told is a costume party, only to find she’s the only one wearing an outfit (a sexy bunny getup, no less).

In reality, Witherspoon went to a neighborhood Halloween party when her daughter Ava was 5 years old. The mom donned a costume as Sally from The Nightmare Before Christmas. “Well, we arrived at the party and … I was the only grown-up in a costume! That’s right, I had to sip cocktails at this party of 50 adults while I was in a full face of rag-doll makeup and a yarn wig. Embarrassing, yes but I believe it speaks volumes about my commitment to holidays.” 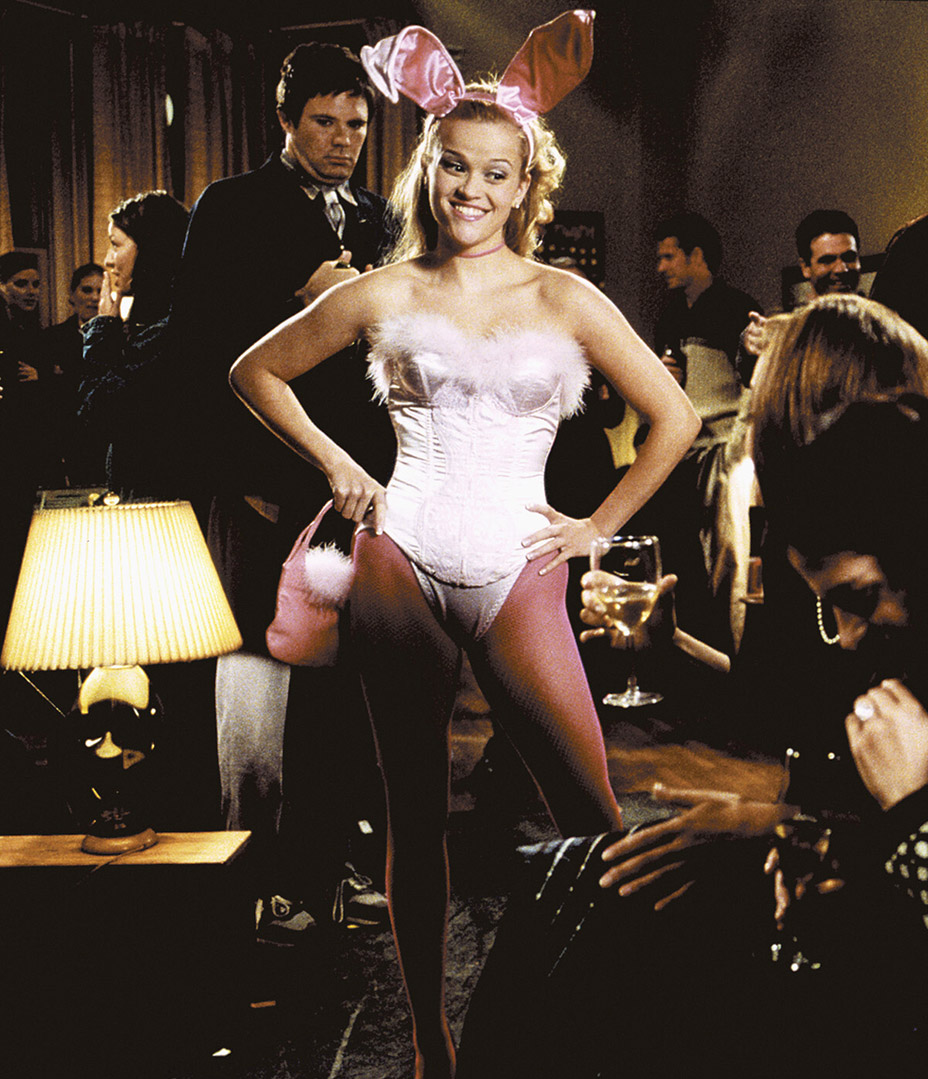 Her family saying is, “If it’s not moving, monogram it.” She became obsessed as a young girl after visiting her friend Ashley, who had white towels with pink embroidery that matched her wallpaper and pillows. Witherspoon thought it was “the chicest thing ever” and ran home to tell her mother. “Then every year she gave me a monogrammed towel or monogrammed beach bag.”

Additionally, she recommends the songs “Jolene” by Parton, “Georgia on my Mind” by Ray Charles, “Blue Eyes Crying in the Rain” by Willie Nelson, “White Liar” by Miranda Lambert and “Chicken Fried” by Zac Brown Band for her Southern party playlist. Witherspoon also talks about her love for bluegrass music from a young age.

12. She used to take makeup lessons.

Though Witherspoon has a stylist now, the budding actress went to a local beauty school taught by former Miss USA contestant Sharon Steakley. She says it’s “just a Southern thing” to take classes on lip liner and eyebrows. Witherspoon learned how to blend to make sure “your face and neck aren’t radically different shades.”

13. She never wears sweatpants on the airplane.

Thanks to her grandmother Dorothea, who said, “You don’t wear sweatpants on an airplane. It’s a privilege to fly. Make sure you wear a nice outfit.”

14. And in case you forgot, she’s from the South and really loves it.

“If you think I sound proud of where I’m from, you’re right,” Witherspoon concludes.