WWI drama, 1917, was named best picture as well as best action/war film by the Hollywood Critics Association, formerly known as the L.A. Online Film Critics Society, on Thursday night in Los Angeles. The film also recognized editor Lee Smith and director of photography Roger Deakins for their individual achievements in putting together the one-take film that is rapidly becoming the frontrunner for this year’s Oscars.

But the evening belonged to South Korean director Bong Joon Ho, who received three awards for his film Parasite and career to date. Parasite won for best original screenplay, with Bong joking that each coffee shop he picks to write his screenplays closes permanently once his work is completed because he chooses ones that don’t get a lot of traffic. Parasite also won best foreign language film honors, and the director won an honorary filmmaker achievement award. “I will continue to create films until Parasite is considered one of my early works,” vowed the director, who turned 50 in September. 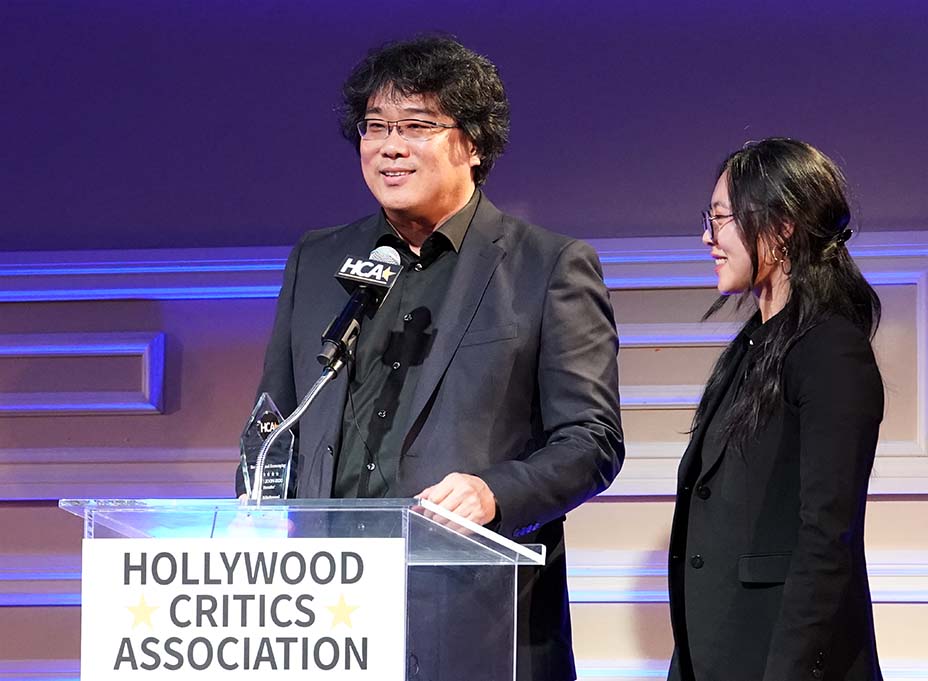 The other big winner of the night was Olivia Wilde, receiving the award for best female director for Booksmart, which also tied for best comedy with Rocketman. “For the longest time people said women weren’t funny. They were always wrong, but it’s great to be part of the proof,” said Wilde.

Kaitlyn Dever received an award for best actress 23 and under, for her performance in the film, and Wilde was declared a Trailblazer, in part for taking on Delta airlines for censoring LGBTQ content for the in-flight version of Booksmart. “It’s the best day of my life. I love it here. This is the only awards show that counts,” an elated Wilde said as she took the stage for the third time. But to Wilde, and best first feature winner Alma Har’el, the evening was equally a reminder of how female filmmakers are still being shut out of the bigger awards shows.

“This year has been an incredible year for women directors. Some of the best movies this year were directed by women. I think it was important to see that this is a systemic problem,” Har’el told THR before the ceremony. “What we’re seeing tonight is one of the first reactions to this, which is to have award shows that are more inclusive, that have more categories, that really help celebrate films that are being left out from the main award shows.”

“I believe it’s the deeply embedded misogyny of this industry that is still taking us a while to unwind. I have no better explanation for it than that,” added Wilde about the lack of female nominees at some of the more traditional awards shows. “It’s interesting because, what do accolades mean? How do you compare art? But it’s that ability to continue working that these awards often determine. That’s what we’re all trying to do. We just want to work.”

The association also handed out Next Generation awards to actors and actresses emerging in the past decade. Waves’ Kelvin Harrison Jr., Blockers’ Geraldine Viswanathan, The Florida Project’s Brooklynn Prince, A Quiet Place’s Millicent Simmonds, Captain Marvel’s Mckenna Grace, Beautiful Boy’s Jack Dylan Grazer, Zombieland’s Zoey Deutch, Honey Boy’s Noah Jupe, Booksmart’s Kaitlyn Dever, To All the Boys I’ve Loved Before’s Lana Condor, and Us’ Shahadi Wright Joseph. “Kindness and love, the things we need most,” reflected Jojo Rabbit’s Thomasin McKenzie as she received her award, the New Zealand native choking up as she mentioned the Australian wildfires in her speech. “We need kindness and love to survive in a world that sometimes feels like it’s crumbling at our feet.”

Another focus of the evening was diversity, with more than half of the first feature nominees and the independent film nominees directed by women. “Diversity, helping others, opening doors and allowing other people to walk through, is what your job is as humans,” said Black and Blue director Deon Taylor, who received the Inspire award. “Sometimes we get caught up in Hollywood with boxes. That is not what Hollywood is about, it’s about welcoming people that have creativity.”

While the intimate awards ceremony had plenty of hard-hitting messages about inclusivity in the industry, and often the lack of it, the evening was not without its share of laughter. As Taika Waititi accepted his award for adapted screenplay for Jojo Rabbit, the actor-director had the audience in stitches from the moment he started trying to take apart the microphone stand for a mic drop: “If you ask any young Maori kid growing up in New Zealand, the big dream is to slowly take away roles from white people,” he joked. “We’ve had an ongoing campaign in indigenous communities for many, many years, around the world. So, watch out, we’re taking them all from you!” 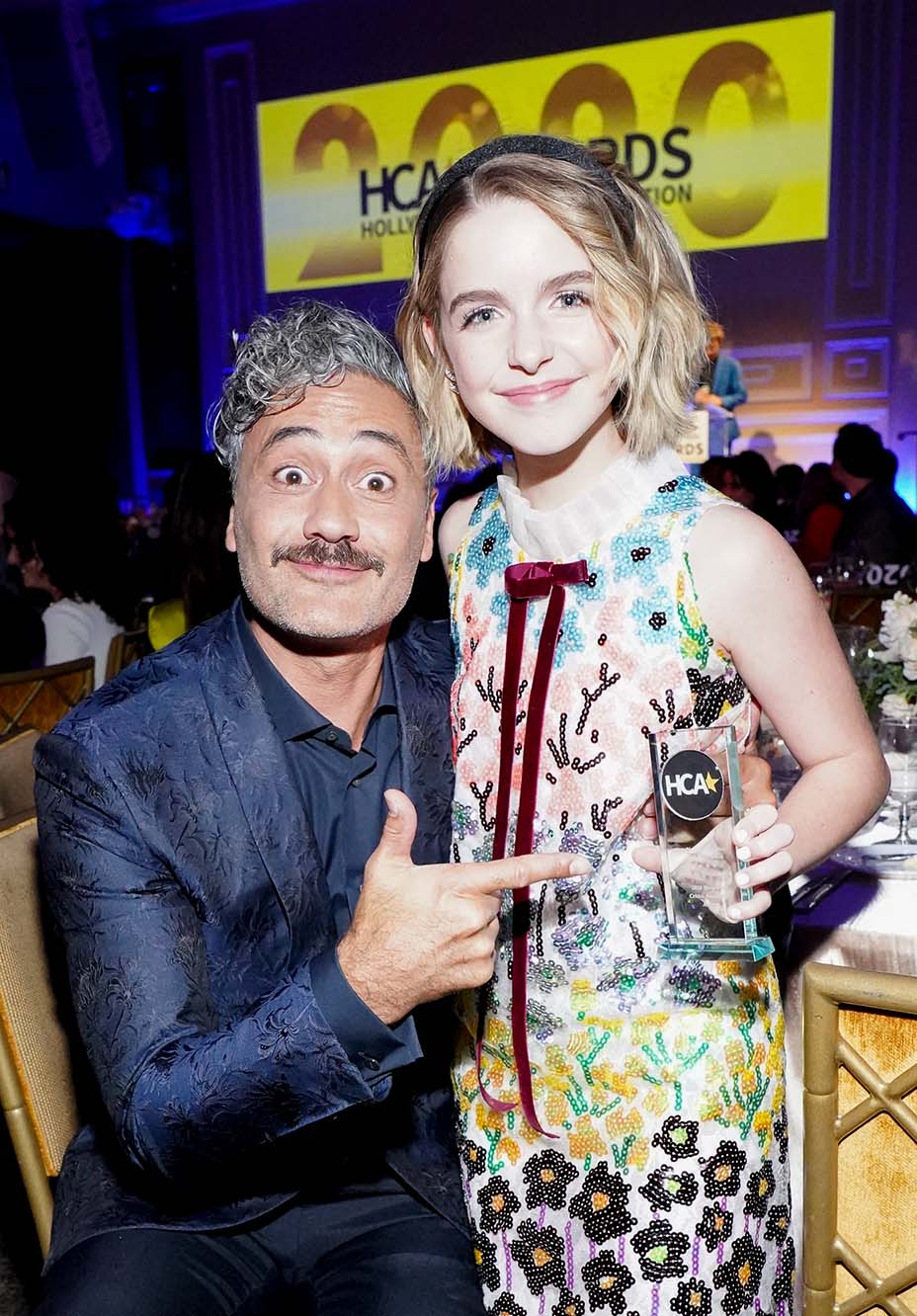 Best Performance by an Actor 23 and Under – Noah Jupe, Honey Boy

Best Performance by an Actress 23 and Under – Kaitlyn Dever, Booksmart

Star on the Rise – Taylor Russell

End of a Decade Awards Recipients

Actor of the Decade – Adam Driver

Actress of the Decade – Kristen Stewart

Director of the Decade – Denis Villeneuve