The low ambient rumble heard before the performance begins signals that 1984 is going to be a grim, sphincter-clenching sit. But this emphatic adaptation of the seminal George Orwell novel, written and directed by rising British stage talents Robert Icke and Duncan Macmillan, reaches heights of punishing intensity that will rattle even the most jaded audiences. The enduring relevance of Orwell’s dystopian classic stems from its extraordinary prescience as much as its literary merits, becoming a book in which almost every age sees dark reflections of itself. That has seldom been truer than in Trump’s America, where alternative facts are the new Newspeak.

Unlike the recent Shakespeare in the Park staging of Julius Caesar that caused a retreat of corporate sponsors intimidated by the outcry from Fox News and its ilk, there are no textual tweaks or visual clues here to connect the play to the present-day political climate. Nor are they needed. There are obvious reasons why the 68-year-old novel went racing back up the best-seller charts soon after Donald Trump’s inauguration.

When doomed rebel hero Winston Smith (Tom Sturridge) has his stubborn insistence on objective truth brutalized out of him, the contemporary parallels couldn’t be clearer. His refusal to accept the Party’s manipulated reality is shot down as mere solipsism, summoning eerie echoes of today’s legions of trolls, ready to denounce the “liberal elite bubble” at the slightest difference of opinion.

Why Broadway's '1984' Audiences Are Fainting, Vomiting and Getting Arrested

Perhaps the bleakest statement regarding the normalization of a vindictive, self-serving government comes late in the play, when Winston’s interrogator, O’Brien, informs him: “The people are not going to revolt. They will not look up from their screens long enough to notice what’s really happening.” Those lines, delivered with understated menace and icy authority by the excellent Reed Birney, send a shiver through the audience.

But how does that connection to our contemporary political arena jibe with the expectations of summer Broadway entertainment, even with theatergoers hungry for thought-provoking material? The answer will depend very much on personal taste. While I can imagine this visceral production (which has played multiple U.K. and international tour dates prior to Broadway) being chillingly effective in an intimate venue like, say, New York Theater Workshop, I found it distancing and unsatisfying in a Broadway house. It’s also, it has to be said, a massive, bludgeoning downer. The impressive stagecraft constantly overpowers the human element of the drama — the cast’s committed performances notwithstanding. And even before the scenes of graphic torture in Room 101, there’s a heavy-handedness to the storytelling that makes it just as often numbing as unsettling.

Which is not to say the adaptation lacks skill or inventiveness. Icke and Macmillan access the story via a group of readers gathered around a table in some kind of book club. Although designer Chloe Lamford’s primary set evokes Cold War-era shabbiness — opaque windows, aged wood paneling, utilitarian furniture — it serves past, present and future. The discussion group is meeting long after the year that gives the novel its title, their comments pointing back to 2050 as the time when history shows that the Party fell. This framing device takes its cue from Orwell’s often-overlooked appendix: The Principles of Newspeak, a work of fiction disguised as fact, outlining the structure and etymology of the official language used by Oceania to reshape reality.

Given the novel’s blurring of the lines separating documented history from truth, and memory from actual experience, these future scenes serve as a clever entry point for the play. They also allow Icke and Macmillan to continue the Orwellian undertaking of questioning everything we see and hear, making Winston an unreliable narrator, plagued by a memory he can no longer trust. Did Winston ever exist, and if not, who wrote the book? Did the regime really topple? Are we all still under surveillance from Big Brother? 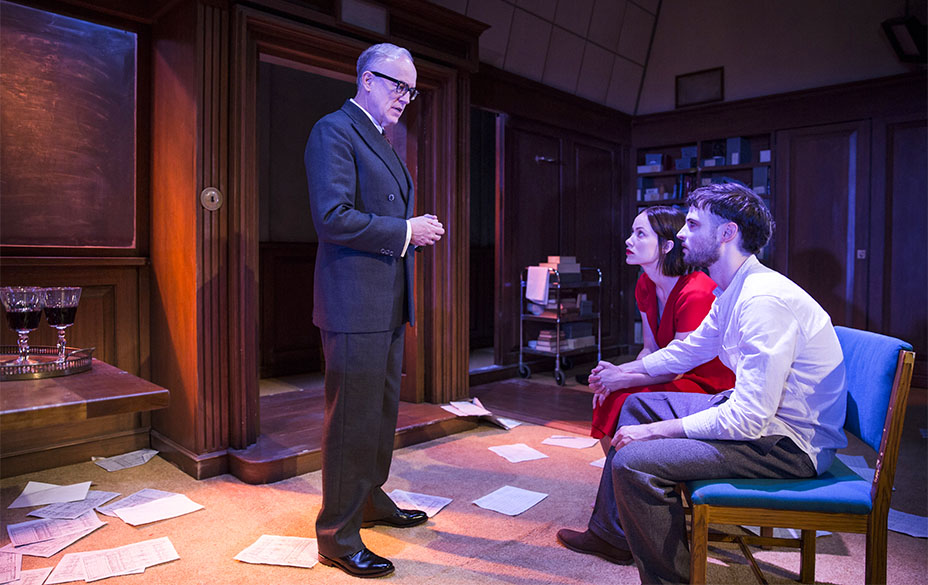 The nonlinear overlay will likely be confusing for anyone unfamiliar with the novel, and all the time-looping and repetition often make the drama play like one of those tedious mind-warp movies that proliferated in the wake of Christopher Nolan’s Inception. But the core elements of the story are all depicted in a fairly straightforward structure over an intermissionless 100 minutes.

Early scenes detail Winston’s role at the Ministry of Truth, where he rewrites inconvenient episodes in official records and erases entire identities of individuals that have committed “thoughtcrimes” or challenged the authority of the Party, rendering them “Unpersons.” This is a regime that actually orchestrates, rather than rails against, fake news. Winston’s radicalization is quiet and tentative at first, only fully expressed once he finds a fellow rebel in co-worker Julia (Olivia Wilde), both of them constantly looking over their shoulders in a climate of extreme paranoia, suspicion and spying. Even children are encouraged to report their parents’ transgressions.

A seemingly benign old antiques dealer, Charrington (Michael Potts), offers Winston a room in the back of his shop: “The one place in the world the past still exists.” Charrington also claims the room is free from microphones and telescreens, the ubiquitous monitors that scrutinize the daily life of the citizenry, calling them to order for such rituals as “The Two Minutes of Hate.”

Winston and Julia find comfort in one another and the freedom to vent their loathing of the Party. Their scenes in the room are performed offstage, captured by closed-circuit cameras and viewed by the audience on a widescreen video wall above the playing space. This serves the dual purpose of exposing Charrington to us as an incognito member of the Thought Police, while making us complicit with Big Brother as we invade the couple’s private sanctuary. However, it also adds another layer of separation from the central love story, contributing to a production that favors intellectual and sensorial engagement over any personal investment in the characters’ fates.

Those fates are sewn up when Winston falls into the trap of O’Brien, who claims to be a recruiter for the resistance movement known as the Brotherhood. Throughout the action, Winston mutters feverishly about “the place where there is no darkness.” That turns out to be the austere hell of Room 101, an environment conjured onstage in the show’s most transfixing coup de theatre, as the main set is destroyed and transforms into a sterile white box, blasted with searing light.

The scenes that follow, in which O’Brien remains coolly detached while systematically breaking down Winston’s freedom of thought, get increasingly queasy. Keeping his own gray suit immaculate and his tone emotionless, O’Brien calls intermittently on a team of hazmat-suited torturers, issuing such concise instructions as “Fingertips” or “Teeth.” Bursts of strobing light and jackhammer sound effects follow those orders, but even though we see the bloody aftermath and not the acts, the carnage is not for the faint of heart. Even worse is the ghastly anticipation fed by O’Brien’s one vivid description of the ultimate torture, which plays on Winston’s pathological fear of rats to make him surrender all sense of self.

Sturridge holds nothing back in a febrile, half-dazed performance that suggests he can see the horror that awaits him even before the threat materializes, and Wilde makes an assured Broadway debut, balancing a public veneer of steeliness with a contrasting softness in private moments. But scenes that should be heartrending play out somewhat remotely; more often, it’s the bold use of lighting, video and deafening sound that monopolize the attention, not the central characters and their inhuman persecution.

There’s no doubt that this imaginative production conveys the claustrophobic terror of a totalitarian state. But, especially right now, when many of us read the news each morning with a sick feeling of dread, who wants to go there?