Continue to The Hollywood Reporter SKIP AD
You will be redirected back to your article in seconds
Skip to main content
March 21, 2018 9:00am
Logo text

This week’s issue of the long-running weekly science-fiction anthology comic is one of the title’s irregular relaunch editions, in which each of the strips inside is either brand new or starting a new storyline so as to allow those not already following the series to jump on board. The issue is Prog 2073, as each issue is called a “Prog,” short for “Programme,” in the comic’s terminology, which also sees the anthology defined as “the Galaxy’s Greatest Comic.”

As such, it’s the perfect sampler for what 2000 AD has to offer, with new stories for classic strips like Judge Dredd and Strontium Dog alongside more recent creations like future war series Jaegir and bounty-hunter buddy story Sinister Dexter, with creators including some names familiar to U.S. readers, including Suicide Squad writer Rob Williams and Aquaman’s Dan Abnett.

The Hollywood Reporter spoke to 2000 AD editor Matt Smith about what goes into relaunching the series on an ongoing basis, and how to keep things fresh for a comic that’s more than four decades old.

Prog 2073 is the latest in the semi-regular “jumping-on” issues to lure in new and lapsed readers. What’s the thinking as you plan these out? How do you arrive at the lineup of material that appears in these issues?

Firstly, a jumping-on prog’s placement depends a previous run of stories all finishing at roughly the same time. There’s no mandated length for a 2000 AD series, but if you find everything’s wrapping up round about the same time, then it makes sense to have a clean slate of stories starting straight after, as it’s a good sell for people to jump on board — plus making them bumper issues seems to increase their popularity. As for the contents, I would’ve been looking at what would be going in it since last year, based on the speed of the respective artists and how much would be ready and, even then, planned series had to be moved back in the schedule and others brought forward.

There’s a really strong balance of 2000 AD’s legacy with a contemporary appeal in 2073, whether it’s classic strips like Dredd and Anderson featuring newer creators, or something like Judge Fear and Jaegir, both of which mine the mythology of the comic for new strips altogether. With 2000 AD more than four decades old now, is it a challenge to maintain fan-favorite strips while also offering something new for those who haven’t been following the series for years?

It’s not always easy. New characters are always important, but the fanbase want to see the classics too — especially when you’re doing a heavily promoted issue on social media, [because] the lapsed readers are always drawn by the inclusion of their favorites. I try not to have a single issue entirely filled with new series; it’s good to have a bedrock of classics in there in some form or other. Then there’s the risk 2000 AD will just become a nostalgia title, so I try to be conscious of freshening things up. 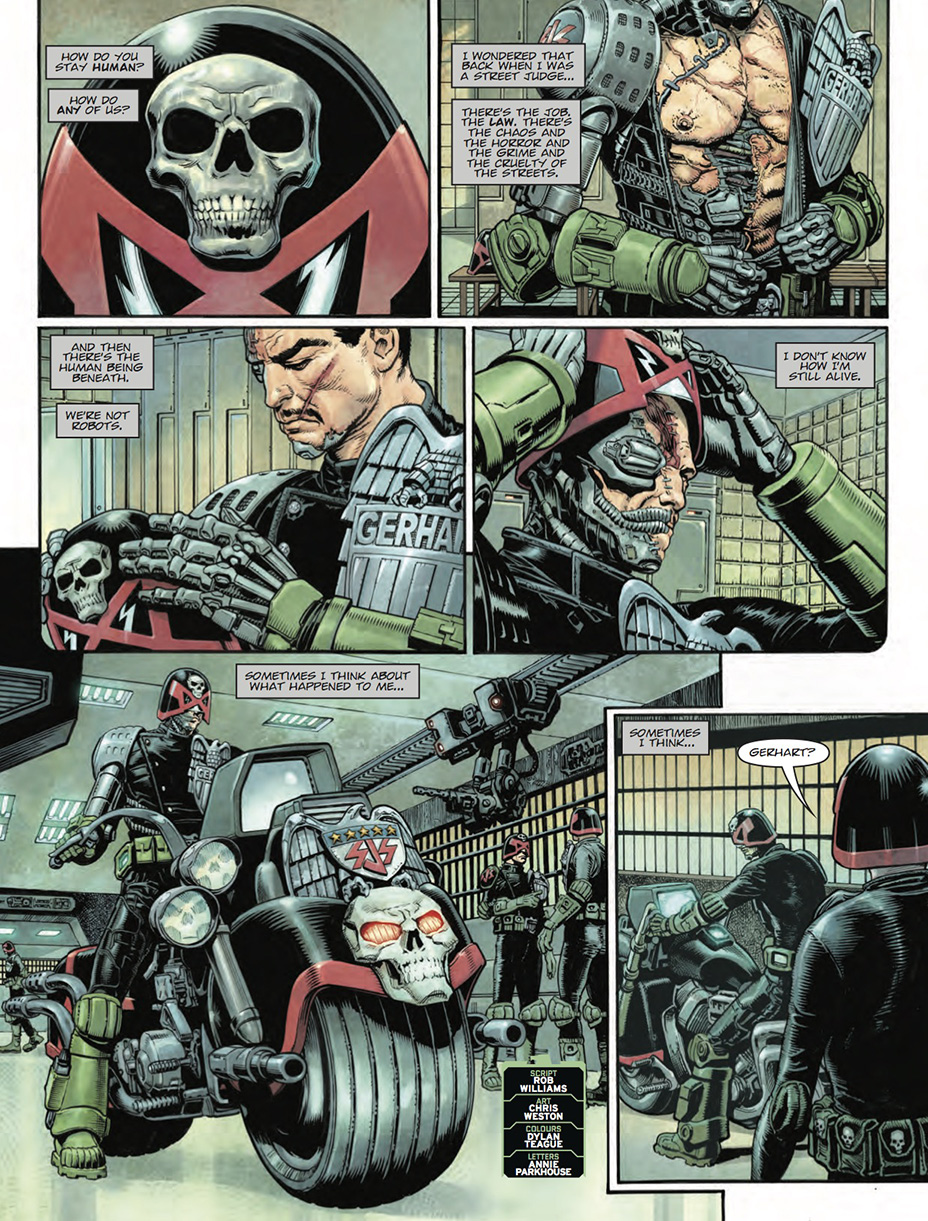 With Dredd, Anderson and Judge Fear, there’s a heavy focus on the Judge Dredd mythology in the issue. Is this coincidence, or is Dredd still the biggest draw of 2000 AD to outsiders?

As far as this issue goes, it’s just coincidence — but there’s no question that Dredd is our biggest-hitter, and will always garner the most interest. Judge Death [Dredd’s arch-nemesis] might be second to the lawman in terms of being a interest-raising draw. With the Fear story, I wanted a self-contained story that added something extra to the start of the other series, and featured a major character. It also tidies up a hanging plot thread — Fear was captured in the [2015 Judge Dredd] “Dark Justice” storyline, while Death, Fire and Mortis were left floating in space. We caught up with what happened with them in the “Dominion” story that ran in [monthly spinoff title] Judge Dredd Megazine last year — and the sequel, “The Torture Garden,” starts this autumn — but the fate of Fear hadn’t been covered up until now.

I wanted to ask about Strontium Dog’s inclusion in this issue. This year marks the 40th anniversary of the character, and he’s returning in a new series written and drawn by the men responsible for creating him in the first place [John Wagner and Carlos Ezquerra, also the creators of Judge Dredd]. Johnny Alpha, the lead character in Strontium Dog, feels like 2000 AD’s potential second breakout character to me — maybe I’m biased, as a longtime fan of the strip — but editorially, was there a feeling of, “This year of all years, we have to have new Strontium Dog?”

Strontium Dog stories tend to materialize when John can think of a new story –- I’m not sure if he and Carlos were aware that 2018 is Johnny’s 40th anniversary, but it’s certainly a neat symmetry to have this story, which features the son of Alpha’s old partner Wulf Sternhammer, appearing this year. The inclusion of Stront always adds a touch of class to the prog –- he’s one of 2000 AD’s most popular characters without question –- so I particularly enjoy having Johnny, Middenface and company appearing in a new story.

The appearance of Future Shocks was welcome, too. Across the years, the short-story format of the series has introduced all manner of creators to 2000 AD, and comics in general, with creators like Alan Moore, Grant Morrison and Neil Gaiman having some of their earliest work appear in the series. How important is keeping Future Shocks in the mix to keeping 2000 AD up-to-date?

Chiefly, they’re the training ground for new creators, so they freshen up the talent pool. But they’re useful to have in the lineup as a done-in-one tale that readers can enjoy on its own terms without needing to be aware of the backstory of some of the longer-running series. I had the room in Prog 2073 –- being 48 pages instead of the usual 32 –- to add extra stories like this to the regular roster.

Beyond the stories that begin in this week’s issue, what’s upcoming in 2000 AD over the next few months?

We’ve got more from the Strontium Dog universe with a new Durham Red series, Born Bad, by Alec Worley and Ben Willsher, coming in May; in the same month there’s the return to The Fall of Deadworld in “Damned,” by Kek-W and Dave Kendall, and the debut of a new character, Skip Tracer, by James Peaty and Paul Marshall; plus there’s some synergy between the comics and the prose departments: Michael Carroll has written a novel set in the early days of the Judges called The Avalanche — published by Abbadon in May — and he and Jake Lynch have done a Dredd strip that ties in with it called “The Paradigm Shift.”

In the Judge Dredd Megazine, there’s a Dredd vs Razorjack crossover by Mike Carroll and John Higgins, the return of skysurfer Chopper by David Baillie and Brendan McCarthy, and in September we have the 400th issue of the Meg, which will be a bumper bonanza of Dreddness. 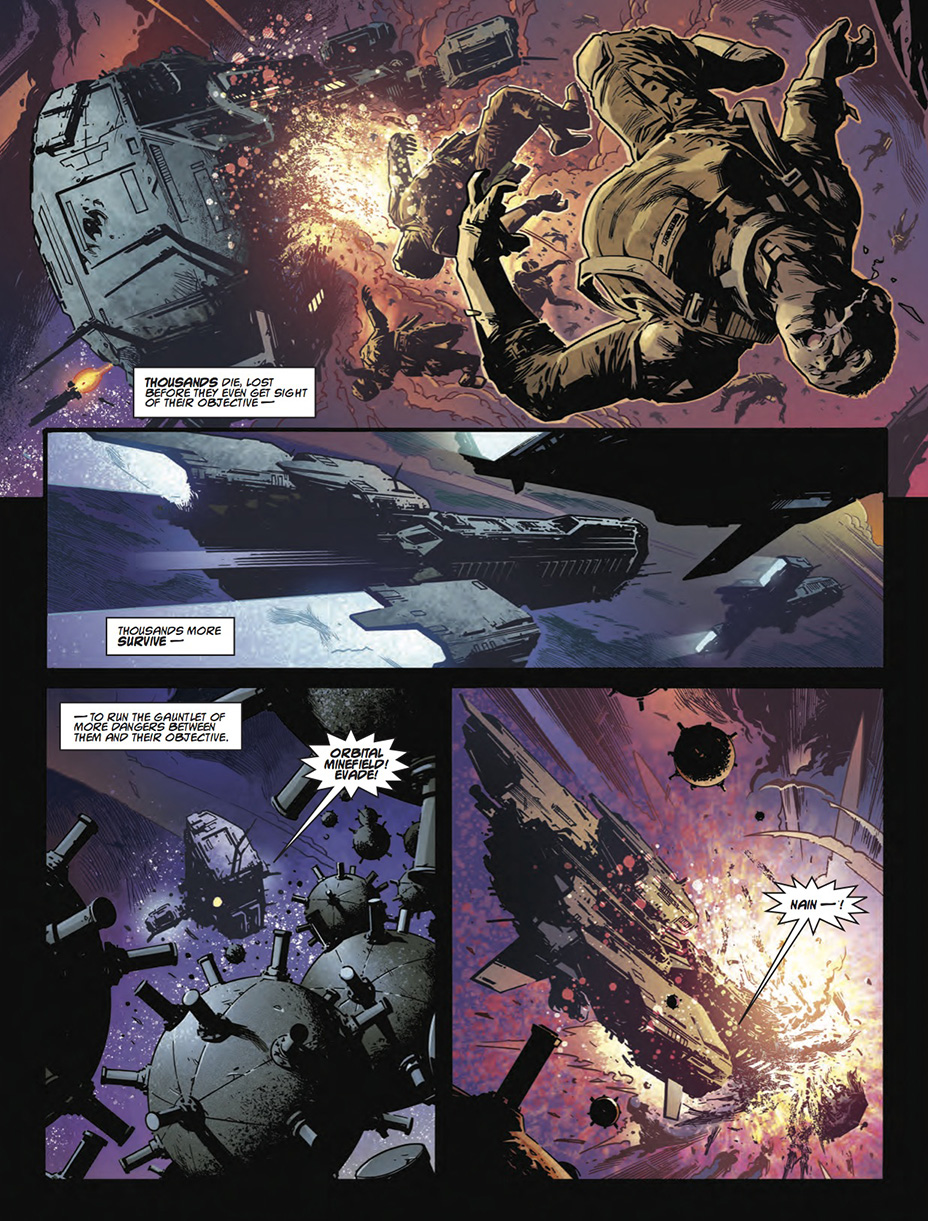