Thirty-eight productions — 19 plays and 19 musicals — opened on Broadway this year. There won’t be room for all of them to be recognized at the 71st Tony Awards, since the field will narrow when nominations are announced Tuesday. But we don’t have to wait until then to learn which shows have the inside track, if we use a little math.

For the past six years, I have employed statistics to predict the Oscars, and last year, I adapted my method for the Tonys. The inaugural experiment was a show-stopping success, as my data-driven model correctly picked 18 of 24 winners. This year, for the first time, I’ll be attempting to predict the Tony nominees in the top four categories — best musical, best play, best musical revival and best play revival. My model uses only numeric inputs — the Drama Desk Awards the Outer Critics Circle Awards, the Drama League Awards, and aggregated critic predictions. The weights are chosen not by my instincts but instead by my computer, based on how closely each predictor has aligned with Tony nominees in the past.

In addition to foreshadowing the most likely nominees, the charts below also serve as preliminary standings for the Tonys themselves. The show listed first in each category is currently the most likely production to win at the Tony Awards on June 11, but plenty could change between now and then as the races heat up faster than a Manhattan summer. 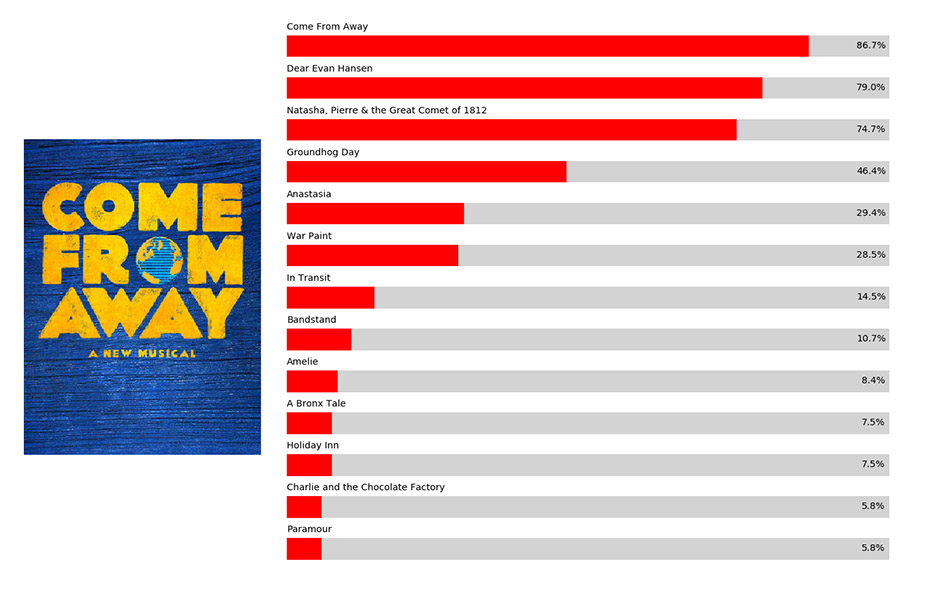 The most prominent category of the night may be one the closest races this year. At the top of the list are Come From Away, set in Gander, Newfoundland, when airline passengers were grounded in the wake of 9/11; Dear Evan Hansen, which revolves around teen suicide and contains music and lyrics by La La Land Oscar winners Benj Pasek and Justin Paul; and Natasha, Pierre & the Great Comet of 1812, based on a section of Leo Tolstoy’s War and Peace. They all have a legitimate chance of not only a nomination but a victory. They won’t go head-to-head that many times in the precursor contests, either, because two of these three competed for other awards in prior years, due to earlier off-Broadway premieres: Natasha began off-Broadway in 2012, while Hansen kicked off in 2015. This should make the Tonys that much more exciting, since none of these shows will have much of a history of beating the other two.

Joining them for the fourth spot could be any number of musicals, with Drama League nominees Groundhog Day, Anastasia and War Paint being the most likely. Last year, the Tonys actually nominated five shows in this category, but that’s far from a guarantee: the previous time they did that was 1960, the year Sound of Music and Fiorello! became the only two musicals to ever tie for the top honor. 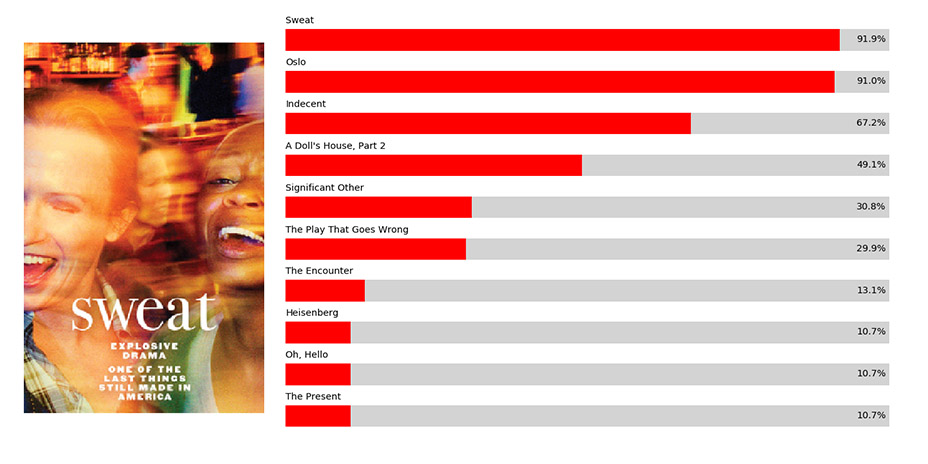 Sweat, which is set in a working-class bar in Reading, Pa., Oslo, which focuses on Norwegian diplomats arranging a meeting between Israel’s Yitzak Rabin and Palestine’s Yasser Arafat, and Indecent, about a controversial 1923 play, are the only three plays to earn Drama Desk nominations, while those three plus A Doll’s House, Part 2 are the only four with Outer Critics Circle nods. Sweat and Oslo earned the strongest critical praise, and the former is surely helped by winning this year’s Pulitzer Prize for Drama. Last year’s Pulitzer winner in that category? You may remember it, seeing as it also went on to win a couple of Tony Awards: The musical Hamilton.

Since the producers of Sunday in the Park With George withdrew from this year’s competition, we’re left with just five eligible shows. But don’t count on the Tonys to take pity and just let them all in: there has never been a year with more than four nominees in this category. As a result, the math suggests that the odd show out will be Cats, along with Miss Saigon should the voters only pick three to advance.

On the other end of the spectrum, Hello, Dolly! has jumped into first place. The role of matchmaker-extraordinaire Dolly Levi is played by Bette Midler, exactly 50 years after she refused the help of another matchmaker when she played Tzeitel in the original Broadway run of Fiddler on the Roof. This should be the second chance for Jerry Herman’s musical to take the revival crown, after a Carol Channing-led version lost to The King and I in 1996.

Just a few months after August Wilson’s Fences earned an Oscar nomination for best picture, another of his Pittsburgh Cycle plays appears set to enter the inner circle, should Jitney receive its expected nomination.

After that, the race gets tighter. Many critics prefer the revival of Six Degrees of Separation, starring Allison Janney (the original Broadway production starred Stockard Channing, another West Wing regular, so those two only have one degree of separation between them). But the Drama Desk instead handed out its nominations to The Front Page and The Little Foxes. The Outer Critics Circle gave a vote to The Price. The Drama League threw in a nomination for Present Laughter. Add it all up, and five contenders sit above 50 percent, but there might not be five slots available.

Something’s got to give, because there aren’t going to be enough nominations to go around for every hopeful show Tuesday morning. And so the curtain’s about to close on some competitors, and for the rest, the lights come up for the six-week run-up to the Tonys.

Ben Zauzmer (@BensOscarMath) uses math to predict and write about entertainment awards for The Hollywood Reporter. He recently graduated from Harvard with a degree in applied math, and he now works as a baseball analyst for the Los Angeles Dodgers.