Backstage at the Academy Awards press room in early 2010, there was an audible gasp when The Hurt Locker won best picture instead of Avatar. An indie film, which earned a mere $17 million in the U.S. and $49 million worldwide, had toppled the top-grossing movie of all time at $2.8 billion, not adjusted for inflation.

It wasn’t the first time a specialty title had beaten a studio juggernaut. Since an indie film wave began almost two decades ago, specialty titles like Birdman and The Artist have often relegated major studio movies to the awards sidelines. Along the way, Oscar telecast ratings have plummeted, with viewership hitting an all-time low in February when Guillermo del Toro’s art house fantasy The Shape of Water won the top prize.

But this year is looking very different. A pack of commercial hits from the Hollywood majors is holding its own in the awards conversation, and it’s happening as the overall 2018 box office heads for record levels. To date, this year has seen a 10.2 percent increase in revenue from $9.7 billion to $10.7 billion and a 7.3 percent increase in attendance since 2017.

In early August, the Academy of Motion Pictures Arts & Sciences went so far as to announce plans for a “popular” best picture category. While the Academy quickly shelved the idea and retreated after backlash, the idea of a popular Oscar may be taking hold organically. (That is, unless Netflix makes history and Alfonso Cuaron’s Roma becomes the first best picture in history to have zero reported grosses.)

“Many have blamed the [Oscar telecast’s recent] low ratings on the fact that the lion’s share of the best picture nominees — even in the wake of the shift to 10 possible contenders — have been either too esoteric or less accessible to mainstream audiences,” says box office analyst Paul Dergarabedian of comScore. “This year has seen a preponderance of films that have [both] critical acclaim and crowd-pleasing popularity at the box office.”

The last billion-dollar grosser to win the top Academy Award was The Lord of the Rings: The Return of the King in 2004. The only major Hollywood studio to have won the Oscar for best picture in the last decade was Warner Bros., for Ben Affleck’s Argo in 2013.

And for a time, studios seemed content to let the indies and their specialty divisions pursue Oscars while they chased tentpoles. But now the studios increasingly covet awards as they try to justify greenlighting midrange movies, make top filmmakers happy and keep them from bolting to Netflix or other streamers. Studio executives and veteran insiders say that newer, younger Academy members are more open to commercial fare. And most are invested in saving the Oscars from oblivion.

The list of Hollywood studio titles popping up on potential best-picture lists include Disney’s Black Panther, Ryan Coogler’s superhero film that has earned $1.34 billion since its release in early February, including becoming only the third film in history to cross $700 million domestically.

And Warner Bros.’ Bradley Cooper-Lady Gaga crooner A Star Is Born has earned a rousing $353.3 million worldwide to date after debuting at the Toronto Film Festival, an incubation lab for best picture contenders. That’s already 81 percent ahead of the $195.2 million grossed globally by Fox Searchlight’s Shape of Water during its entire run.

Disney’s Mary Poppins Returns, opening in theaters Dec. 19, is also being touted by awards pundits who have seen the Emily Blunt-Lin-Manuel Miranda musical directed by Rob Marshall. So too is Paramount’s John Krasinski-helmed A Quiet Place, which grossed $340.7 million worldwide this year.

At Warners, president of worldwide marketing Blair Rich says films shouldn’t be counted out solely because of their popularity, even if the proposed idea of a “popular Oscar” category was widely derided this year. “A Star Is Born has been seen by a lot of people and deservedly so, because they connect on an emotional level,” says Rich. “Surely that merits being part of the awards conversation.”

But if major studio films such as A Star Is Born keep garnering the majority of the Oscar buzz, films like Fox Searchlight’s period dramedy The Favourite or Annapurna’s If Beale Street Could Talk (opening Dec. 14) and Vice (Dec. 25) could find it tough to partake in the bounty that goes along with a robust awards run.

Numerous insiders say voters could still favor a specialty title such as Beale Street, Barry Jenkins’ follow-up to his Oscar-winning Moonlight. And several studio movies have lagged at the box office so far but are still vying for Oscar glory, including First Man and Green Book, both from Universal, and Fox’s Widows. But a shift is being felt.

“At this time last year several awards contenders, like Lady Bird, Call Me by Your Name and Three Billboards Outside Ebbing, Missouri, were already in release and the indie buzz was deafening. That’s not the case this year, with only The Favourite seemingly living up to awards hype,” says Jeff Bock of Exhibitor Relations.

Over Thanksgiving weekend, The Favourite landed in four theaters, posting the best location average ($105,633) since La La Land nearly two years ago. Searchlight co-chairman Steve Gilula, who intends to roll out the film slowly, says this season is playing out differently in terms of the impact of the majors.

“At this stage of the awards conversation, it feels like the major studios are much more significant in the mix,” Gilula says. “It’s a pendulum that swings. Critically and commercially, they’ve had a very good year. This isn’t necessarily a trend; it’s a cycle.” 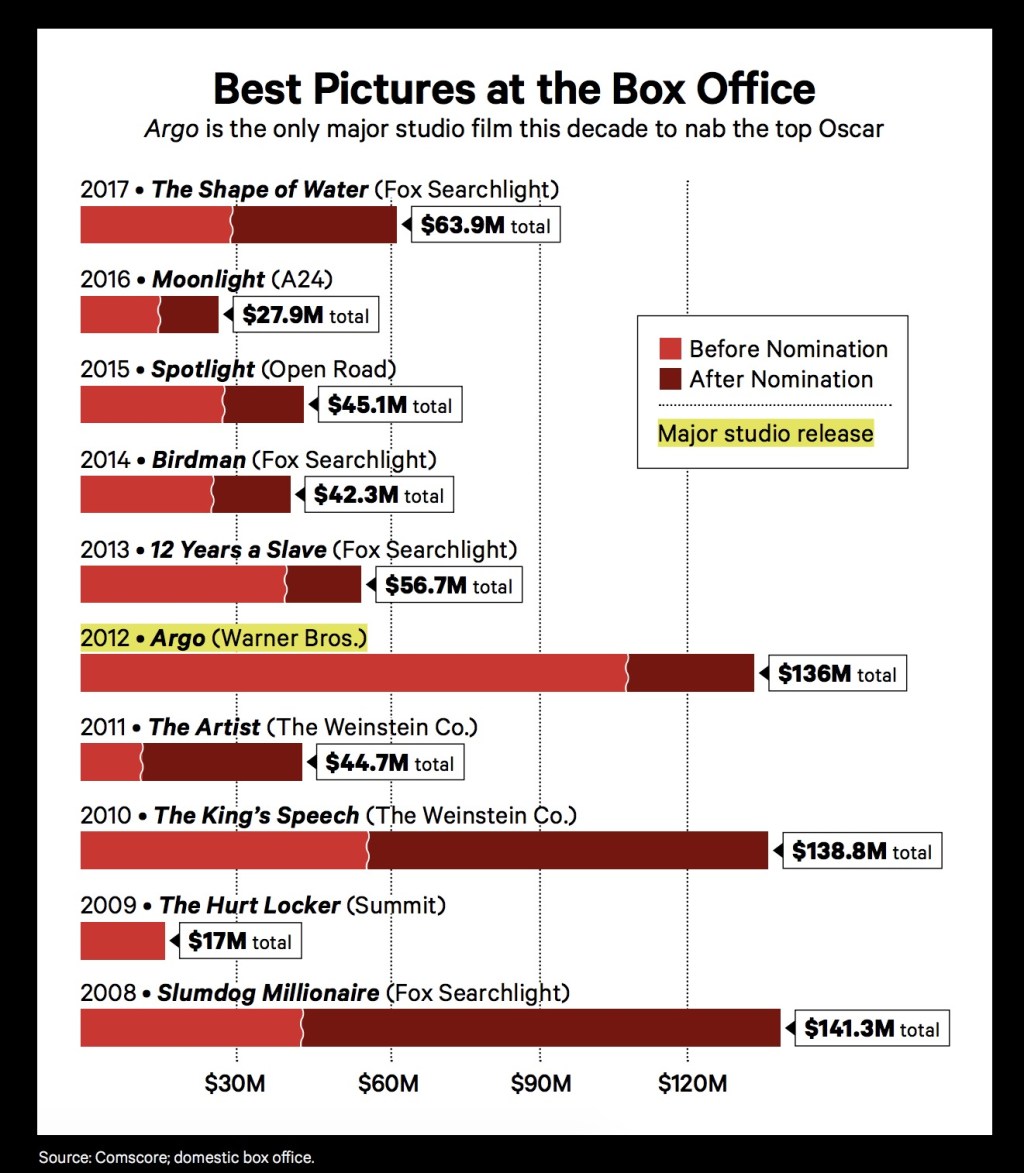 Why Is Netflix Waging a Pointless War on the Box Office?