The inaugural edition of the Felix L.A. art fair, founded by former UPN CEO and onetime Walt Disney TV president Dean Valentine, will open with a poolside bash on Valentine’s Day and include a number of special presentations that nod to Hollywood architecture and landmarks, as well as entertainment’s tradition of the revelatory celebrity interview, its role in the making and faking of nostalgia and its predilection for the preternatural.

The fair’s special projects, all presented by local galleries or curators and featuring many local artists, will be installed in suites, public spaces and poolside bungalows of the Hollywood Roosevelt Hotel alongside art for sale from about 40 galleries, many from Los Angeles and New York, others from San Francisco, France, Germany, Australia, South Africa and China. (A full list of exhibitors is below.)

Inside the Museum of Broadway's "Making of a Broadway Show" Exhibit

Felix joins two established L.A. fairs, Art Los Angeles Contemporary (now in its 10th year) and stARTup (hosting its fourth L.A. fair), as well as heavy-hitting newcomer Frieze, the influential London-based fair that is seen as the linchpin of what is sure to be the city’s most robust arts week ever (all four fairs wrap on Feb. 17).

Valentine, a board member of the Hammer Museum, says the choice of the hotel format is meant to evoke the storied but short-lived Gramercy International Los Angeles at the Chateau Marmont in the mid-1990s, considered by some gallerists and collectors to be a key inflection point in L.A.’s emergence as an art city. The Roosevelt also has its own associations: It was the site of the first Academy Awards in 1929. And many rooms, including those being put to use by Felix, overlook the Hollywood Walk of Fame and the Chinese Theater. Valentine hopes the varied spaces and presentations at the hotel will give visitors “the surprise of turning a corner” and finding an unexpected object, moment or connection with another art lover.

The name “Felix” came in part from one of Valentine’s favorite cartoon characters, Felix the Cat; it’s also a nod to a favorite painting, Paul Signac’s seminal portrait of the 19th-century art critic and anarchist Felix Feneon. The allusion to anarchy may be apt because Felix is being produced somewhat on the fly, especially compared to Frieze, which has spent years laying a foundation for its expansion to Southern California and has a well-oiled, well-heeled and market-savvy operation (as well as majority owner Endeavor) behind its presentation of 60 galleries.

Valentine brought on as co-founders his longtime friends, brothers Al Moran and Mills Moran of the West Hollywood gallery Moran Moran (founded in 2008 as OHWOW). Valentine “sort of tossed the idea around with us,” Mills Moran recalls, “and we immediately thought of the Roosevelt.” Last week, as Valentine led The Hollywood Reporter on a tour of the Roosevelt, he laid out his vision for the artist projects. 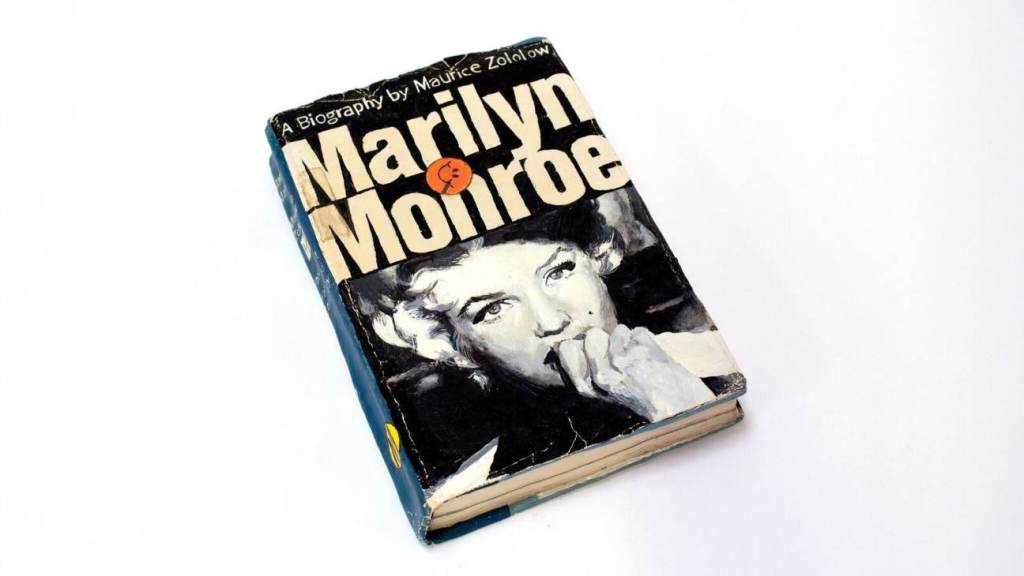 In the hotel’s lobby, artist Kristen Morgin, known for her unconventional use of unfired clay, cement and glue, will exhibit what she calls a “portrait” of Jennifer Aniston. Presented by Marc Selwyn, the tongue-in-chief depiction takes the form of  “Jennifer Aniston’s Used Book Sale,” a series of tabletop ceramic sculptures of the nonfiction and self-help books that Morgin — drawing on interviews the actress has given — envisions Aniston may have once owned. Highlights include a hardcover biography of Marilyn Monroe; psychoanalyst Erich Fromm’s popular 1956 book The Art of Loving; I Ain’t Much, Baby – But I’m All I’ve Got, published in 1972 with the era’s must-have rainbow on the cover; a paperback of Tennessee Williams’ Cat on a Hot Tin Roof (complete with a Garfield sticker on the cover); and a well-worn 1970s-era edition of E.B. White’s Charlotte’s Web.

Also in the lobby, artist Parker Ito will install two 11-foot tall paintings — one in black and white and one in an almost lurid Technicolor — that take the Durer engraving “St. Eustace” as their departure point. He has populated each painting with imagery from his own life in L.A., as well as Hollywood landmarks including the Capitol Records building and Chateau Marmont. Ito’s work is presented by the gallery Chateau Shatto (co-founded by his wife, Liv Barrett). 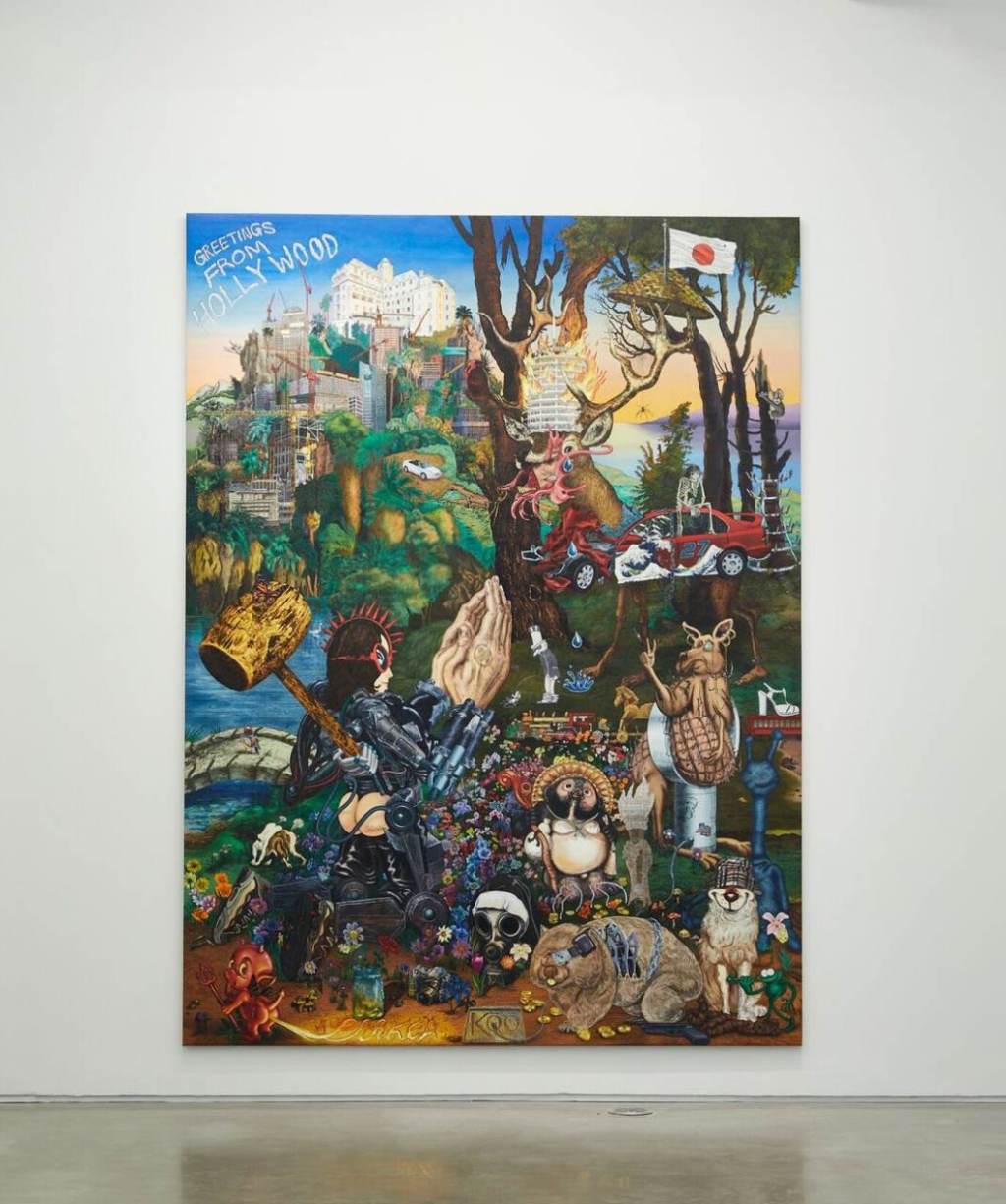 The interactive installation “Record Store From Outer Space” by artists Esther Pearl Watson and Mark Todd (who show with Susanne Vielmetter) will proffer handmade zines, a reading room and a listening station. Todd’s paintings of record covers for imaginary musical acts draw heavily on puns, googly eyes and the now-epidemic levels of nostalgia for vinyl. Watson’s work on view is connected to the nomadic aspects of her Texas childhood in Texas with a flying-saucer-building father.

Astral Oracles — described as “an open-source spiritual community of psychics, witches, oracles and magicians” — will set up shop in the lobby (presented by Emma Gray’s Santa Monica space Five Car Garage) to offer astrological readings and reiki healing, along with an array of “bottled spells,” potions and other like paranormal paraphernalia.

In the realm of some darker spirits will be L.A. curator Andrew Berardini’s group show, in the Johnny Grant Suite, where the legendary radio personality and TV producer — known as the honorary mayor of Hollywood — died more than 10 years ago. “Los Angeles has long been cast as ‘sunshine noir,'” Berardini says, adding that his aim is to “import a little authentic French noir and Parisian spleen to deepen the burn of California shadows.” He has cherry-picked artworks that convey a “sinister mystery” and dark spiritualism, as he puts it, from 15 galleries that belong to an association known as the French Professional Committee of Art Galleries.