From the teeming masses on the sidewalk to the ever-changing skyline, everything in Hong Kong moves fast, and the city’s food scene is no different — if anything it moves faster. Hongkongers love a new restaurant, especially food concepts from foreign shores. Visitors and the newly arrived will find the number of new openings that occur every month bewildering, and will be equally shocked at how quickly locals lose interest in these places when the novelty wears off.

This then is The Hollywood Reporter‘s guide to the most-talked-about new restaurant openings in Hong Kong over the last year, including those eateries that have thrived and kept the public’s interest and some that should have no problem making an impact, as well as one hidden gem that feels like a new discovery.

It’s an obvious point, but Hong Kong is well stocked for Cantonese restaurants, so the newly opened Madame Ching had to be extra-special, and not just because it is named after the world’s most notorious female pirate. A modern twist on the traditional roast house, the restaurant certainly looks the part and the elbow-to-elbow atmosphere will to appeal to visitors looking for that “Hong Kong experience” without having to venture north to Kowloon (although you very much should). It’s the food, though, that’s been packing them in night after night, and the menu is full of tasty barbeque options and small snacks that have their basis in Chinese classics but with an added something extra and unexpected.

Another new opening from the Pirata restaurant group, Chifa opened in Soho and its offer of Chinese-Peruvian is certainly usual — the naysayers might even suggest is a tad gimmicky — but there’s a genuine tradition of Chinese food in Peru that came from immigrants settling in the South American country. The basic gist at Chifa is classic Chinese dishes made with Peruvian ingredients, so, for example, there are dumplings with a Latin twist, duck rolls with Peruvian corn puree and so on. It may be a touch too outre for purists, but Chifa has been popular since opening so they must be doing something right.

Dish to sample: The dumplings are the signature dish, but to get the full Chinese-Peruvian experience try the stir fried prawns (HK$260/US$33). 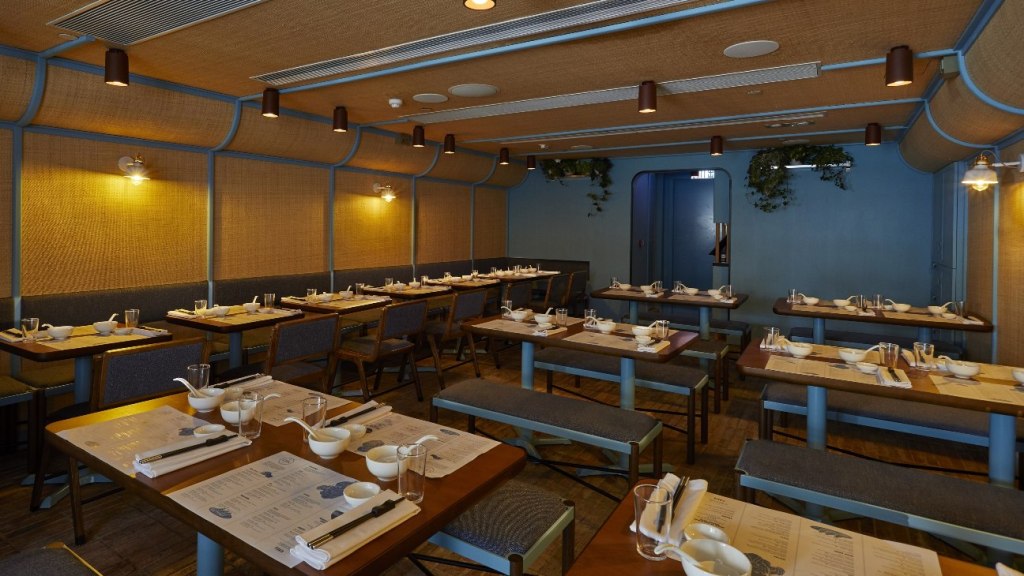 A small but luminescent new entrant into Hong Kong’s dining scene is chef Gizzy Alesbrook’s Hotal Colombo, an easygoing Sri Lankan-style canteen in Soho. The restaurant’s hard-to-miss exterior is an inviting explosion of color and the theme continues inside with comfort dishes that have that home-cooked feel served inside a cosy atmosphere. Sri Lankan food isn’t as well known as other cuisines from the Indian subcontinent, but counterintuitively, Hotal Colombo’s menu is deliberately free of information and explanation — the onus here is on discovery, and the friendly staff are on hand and happy to guide visitors.

Dish to sample: There is a lot to savor, but the fish kari eaten together with hoppers (rice and coconut crepes) is a must (HK$108/US$14). 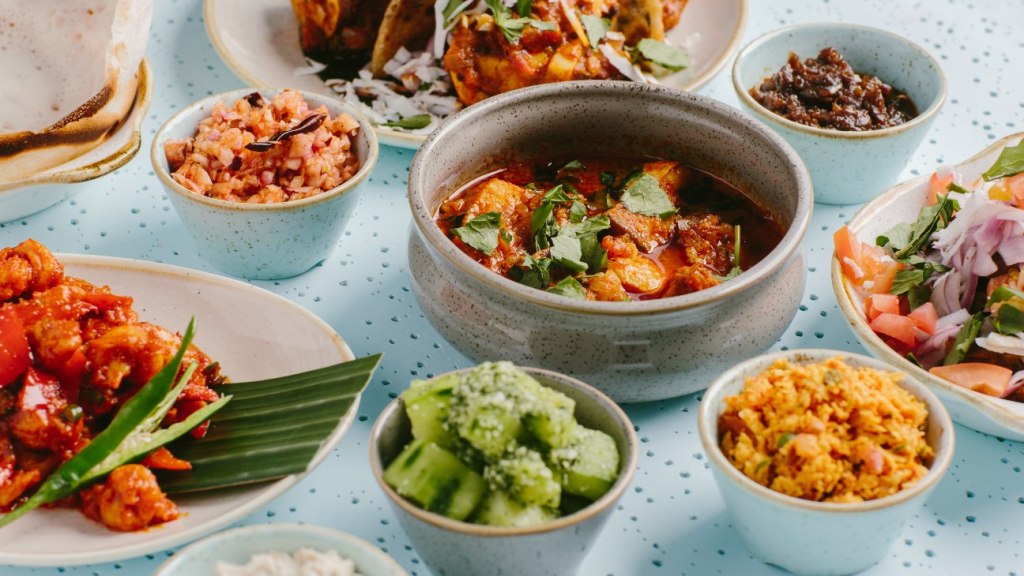 Gordon Ramsay may have conquered Europe and North America, but he’s had a tougher time cracking Hong Kong. The recently opened Bread Street Kitchen & Bar on The Peak is the ubiquitous celebrity chef’s second attempt at establishing his brand in the city. The previous Bread Street, based on the London original, was located in the boozy nightlife district of Lan Kwai Fong and didn’t exactly rip up any trees before it closed in 2018. But Ramsay and his local partners have moved to more premium surroundings with stunning views of Hong Kong, much more in keeping with the high-quality food and equally high prices.

Dish to sample: With its focus on British classics, it only stands to reason that first-time visitors should try the fish and chips (HK$198/US$25) or the beef wellington (HK$888/US$113). 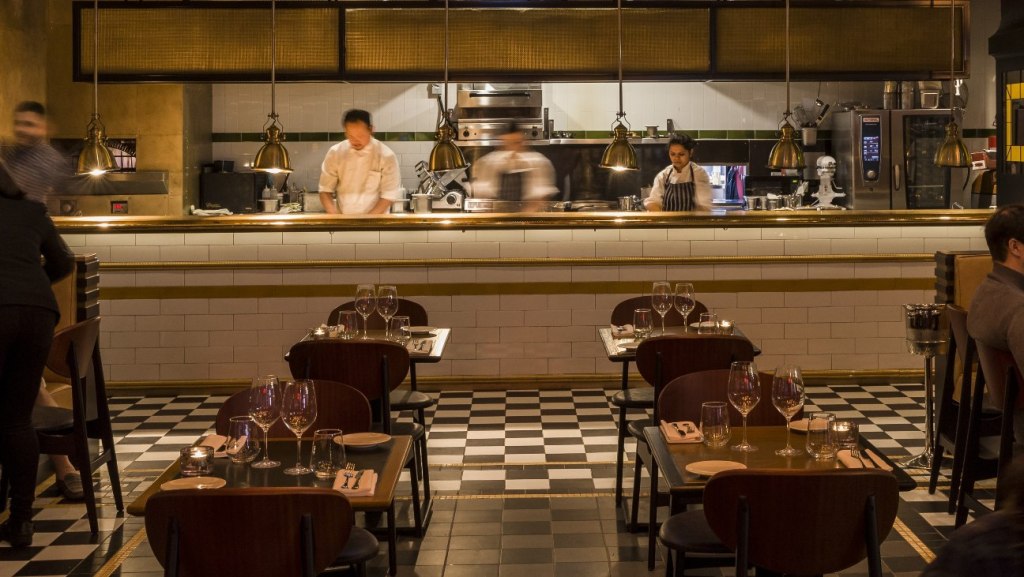 Located in Wan Chai’s fine dining cluster around Star Street, Black Sheep Restaurants recently opened this Greek taverna-style restaurant. A thoroughly post-modern, and perhaps even post-ironic, eaterie, Artermis & Apollo plays on conventional stereotypes of Greek food, design and even fonts and delivers a restaurant experience that doesn’t take itself too seriously but delivers on high-quality food. The menu is simple, with a focus on fresh ingredients and expertly grilled meats, and the friendly staff are more than happy to pour you an ouzo or two.

Dish to sample: It has to be the pork souvlaki (HK$88/US$11), of course, but the sauces are just as memorable. 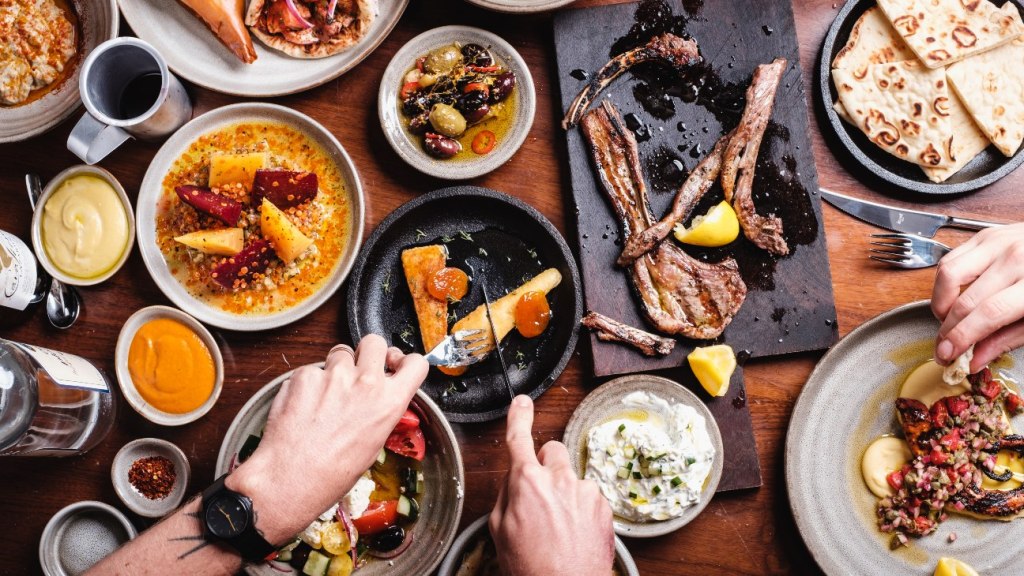 OK, OK, Okra is not new. It’s been around quite a while. But this little gem of a restaurant, hidden away in deepest Sheung Wan, will seem new to a whole host of people, and certainly people visiting Hong Kong. Everything about Okra is deliberately low-key, and that in itself makes it stand out in a city where those that shout loudest often get heard. Owned and operated by chef Max Levy, Okra is essentially two restaurants all inside a heritage building. Downstairs is the boozy and fun izakaya that serves an array of snack and dishes that range from simple to complex, and all paired with sake and beer. Upstairs is the real reason to visit, the hardly advertised omakase with limited spaces where lucky guests can spend several hours being served by a sushi master.

Dish to sample: If you can secure an omakase reservation, then an evening in the company of Max Levy is one of Hong Kong’s great culinary experiences; failing that, downstairs try the fried chicken hamachi (HK$258/US$33). 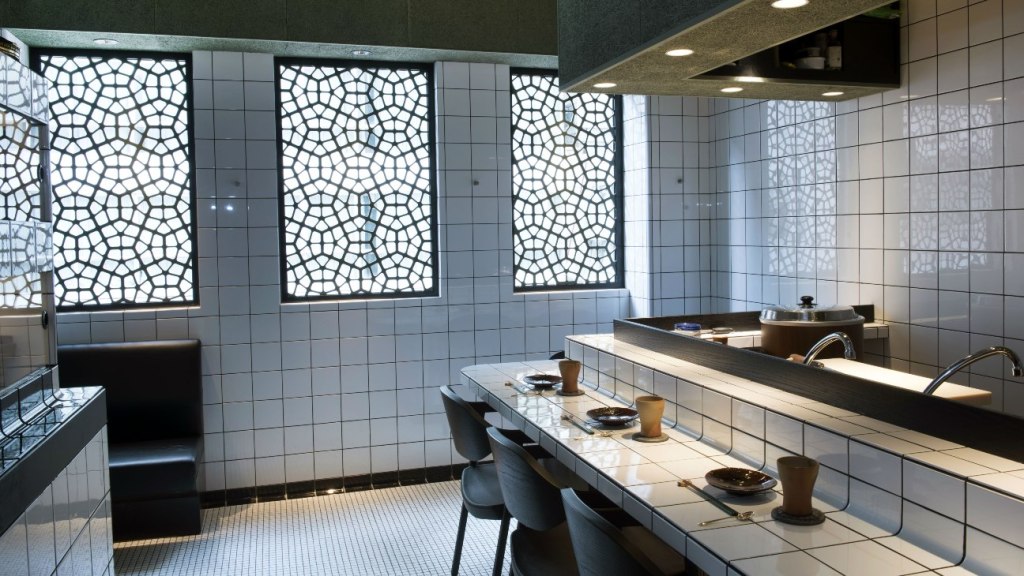 Another neighborhood izakaya, this time back in the ever-popular Soho district, is Fukuro, which made many critics’ best new restaurant lists in 2018. The focus here is fun, the staff greet guests warmly upon entering (they actually yell “Fukuro!” enthusiastically) and from there you experience Hong Kong’s take on a Japanese drinking den. Expect a raucous atmosphere, plenty of beer and sake and some very tasty Japanese casual dishes to soak up all that alcohol. There is no reservation policy at Fukuro and the place opens later than most in Soho, so if you’re looking for somewhere to eat and especially drink late, then this is the spot.

Dish to sample: The crispy caramel butter corn (HK$78/US$10) has become a staple dish, not least because it looks great on Instagram, but the yaki udon (HK$198/US$25) is worth the time, too. 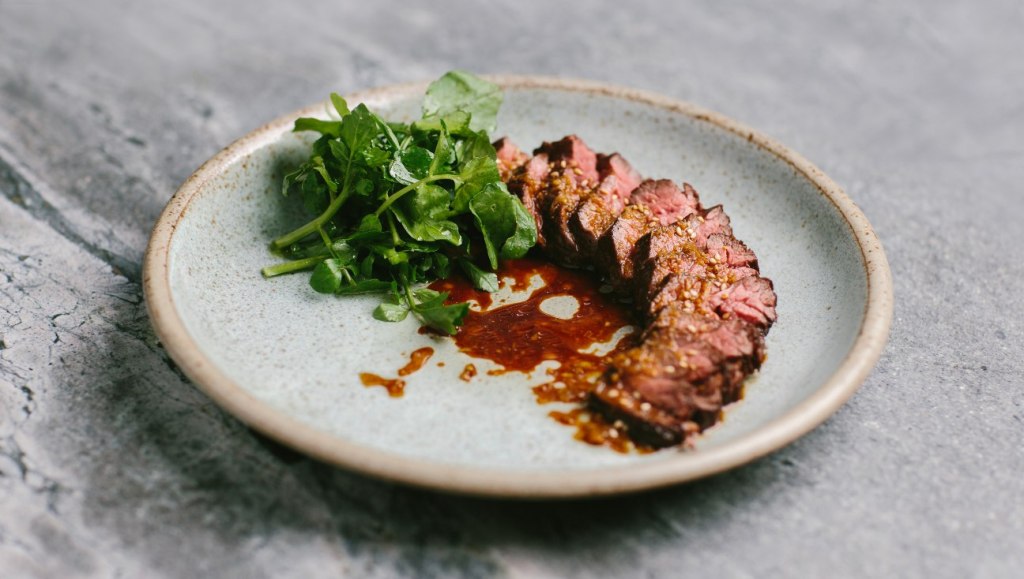 A short walk from the Hong Kong Convention Centre and not far from world famous Blue House, Fini’s is a new joint from the city’s best purveyors of Italian-American cuisine. Formerly branded as Stone Nullah Tavern, a bar-restaurant that led the revival of this part of Wan Chai, the switch to Fini’s means a fresh coat of paint and more importantly New York-style pizzas baked in a custom-made open-flame copper dome oven. Fini’s is uncomplicated but hearty fare and is sure to become a fixture in this part of Hong Kong.

Dish to sample: The Pappardelle Nose to Tail Bolognese (HK$188/US$24) is a holdover classic from when the restaurant was called Stone Nullah Tavern, but the new Bronx and Brooklyn pizzas won’t disappoint. 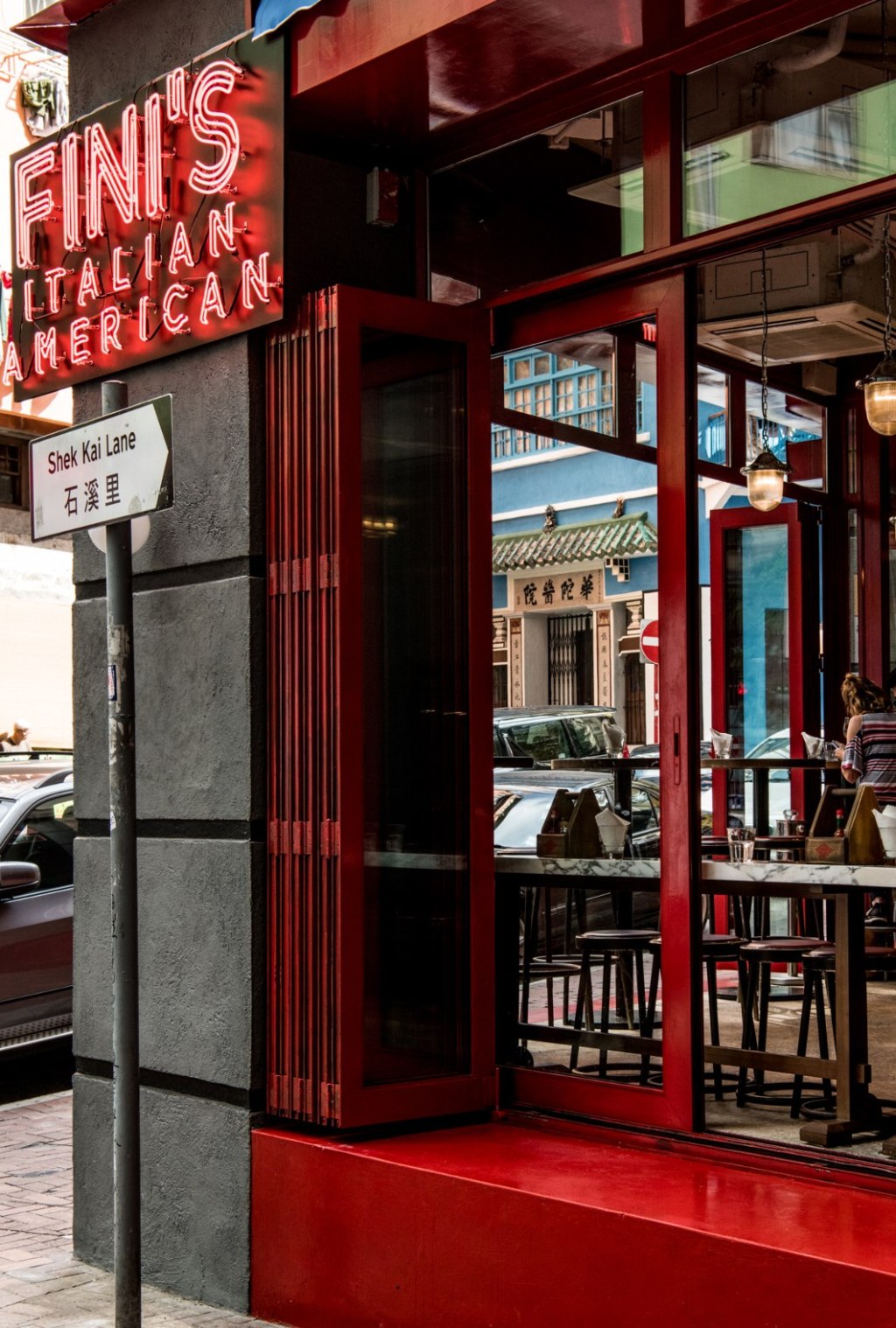