The Morning Show‘s Jennifer Aniston took home the statuette for best female actor in a drama series at the 2020 Screen Actors Guild Awards on Sunday night — her first overall win in more than 20 years and first-ever individual win from SAG.

While accepting the honor, Aniston reflected on the years she spent trying to break into the business and credited a restaurant commercial for her big break. “They were humble beginnings, but you have to start somewhere!” she said.

Aniston went on to thank her Morning Show co-star and executive producer Reese Witherspoon, along with head writer Kerry Ehrin, who she said created characters that are “layered and complicated and messy and ugly and just beautifully human.”

While wrapping up, Aniston gave one more shout-out — this time to her longtime friend Adam Sandler for his role in Uncut Gems. “Adam Sandler, your performance is extraordinary and your magic is real, buddy,” the actress said. “I love you.”

Prior to winning her award, cameras caught Aniston laughing at a joke from Brad Pitt about his Once Upon a Time in Hollywood role. “Let’s be honest, it was a difficult part,” Pitt said while accepting the prize for best supporting actor in a film. “The guy who gets high, takes his shirt off and doesn’t get on with his wife. It was a big stretch.”

Pitt was later seen backstage watching Aniston accept her own award. The two eventually connected and congratulated one another on their wins.

Another look at Brad Pitt watching Jennifer Aniston winning her statue for #TheMorningShow at the #SAGAwards pic.twitter.com/Wg6vQm8Q1z 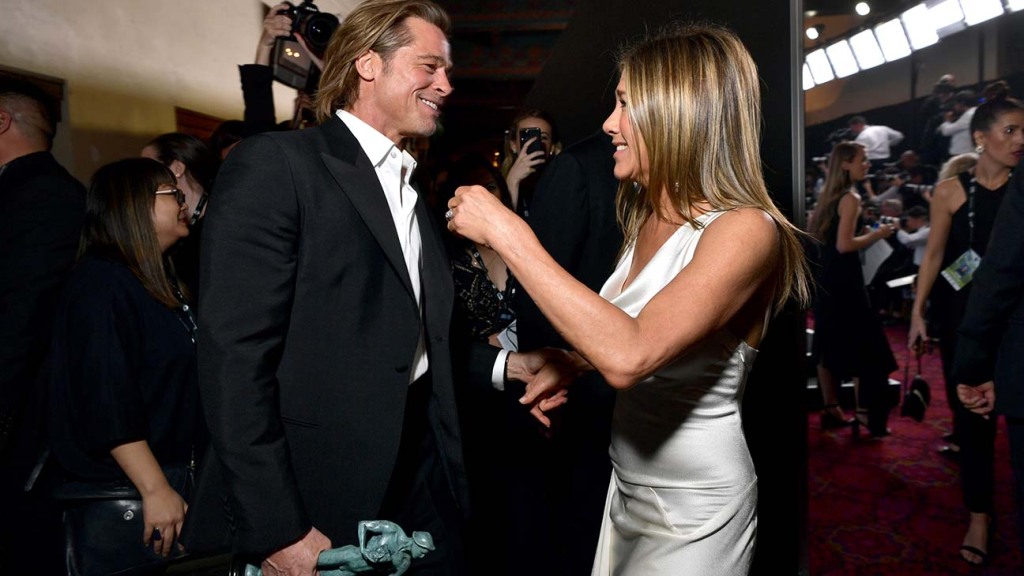 Aniston also spoke to reporters backstage, revealing that she was in shock from the win (“I did not see that coming at all!”), but felt “honored to be a part of a show that is beginning a dialogue — a conversation about an issue that affects each and every one of us in all parts of the world.”

The Morning Show‘s premiere marked Aniston’s return to television after Friends ended in 2004. As for the future, the actress said she’s “just kicking into a creative stride.”

Aniston’s win is one of the first major awards for an Apple TV+ program after the eagerly awaited streaming service launched in November with The Morning Show among its star-studded initial slate. Co-star Billy Crudup, also nominated for a SAG Award but failing to win, won a Critics’ Choice Award last week. The show previously earned three Golden Globe nominations.

The 26th annual SAG Awards aired on TBS and TNT from the Shrine Auditorium in Los Angeles.