It was all about celebrating the best in television’s daytime lineup at the 44th annual Daytime Emmys, held Sunday night at the Pasadena Civic Auditorium.

Hosted by Extra’s Mario Lopez and The Talk’s Sheryl Underwood, this year’s ceremony honored soap stars, talk show hosts, game show hosts and more. Although the gathering was not broadcast on television, nominees, presenters and guests were ready to celebrate their love of daytime programs on the red carpet.

E!’s Ross Matthews, a presenter at the show, says he feels a personal connection to the Daytime Emmys, telling The Hollywood Reporter: “Daytime is so intimate to me. It has just always been where my heart and mind live. I remember watching as a kid, knowing I would be there one day, and it’s happening right now. I would come home at 3, Rosie [O’Donnell] was on, Oprah [Winfrey] was on, and I’ll never forget watching Rosie winning, crying for the first time. I cried with her.”

Comedian and presenter Margaret Cho viewed the ceremony as a way to celebrate the hard work that people may not recognize. She told THR, “This is kind of the meat and potatoes of television. This is, like, the real business, not just the glitz and glamour that we see on the red carpet all the time. It’s actually people that do the work.”

Known for her role as Diane Miller on General Hospital, which won best daytime drama, Carolyn Hennesy said she believes people find solace in daytime television, which is why soap operas, in particular, have left a mark on viewers.

“We are in their homes five days a week. We are, the families on soaps, sometimes more family and more familiar and more loving than sometimes people’s biological families,” the actress told THR. “We are the comfort blanket. We’re nestled in people’s hearts and that’s why hopefully these four [current broadcast soaps] will never go away. People need their stories.”

Sharing the same sentiments, Days of Our Lives actor Stephen Nichols said: “Soaps are really the only place where families gather, whole families and generations, because they’ve been on for fifty-something years. I don’t think there’s any type of show in the medium that does that.”

With soaps being a part of daytime television for decades, Bold and the Beautiful actress Courtney Hope said she sees the programs as an opportunity to dive into, at times, uncharted territory for fans. “Yes, they’re real stories, but they [soaps] also have the drama of the reality aspect of the heartache, the loss, the death… the stuff that are sort of taboo in real life that people don’t really want to talk about,” she said.

For her part, outstanding supporting actress winner Kate Mansi (Days of Our Lives) told THR that it’s the hardworking teams behind the shows that make the programs a force to be reckoned with. “It’s not just about what you see is being produced and seen on TV,” she said. “It’s the training. It’s the work. We have a community of the most passionate and dedicated hardworking people that I have ever worked with, and that stays with you.”

Talk show hosts also opened up about working to establish a camaraderie with their audience. It is that connection with viewers that The Chew co-host Daphne Oz believes is what makes their programs so special. “Daytime TV is so much fun. You’re in people’s lives every single day. You’re talking to them like they’re your friends,” she said.

Jeannie Mai and Loni Love, nominated co-hosts of The Real, view the Daytime Emmys as an opportunity to celebrate legacy and diversity.

Sharing the same sentiments as her co-host, Love said: “It’s important for us to come together, at least once a year, and understand what’s happening in this industry and then be able to, you know, give kudos to the people that are doing well. So, I think award shows matter, that having diversity matters, and I think that’s what you see.”

Big winners on the night included General Hospital, who took home the Emmy for outstanding drama series, and wins for departing actors Mansi, Bryan Craig and Steve Burton. Bold and the Beautiful actor Scott Clifton was also the first male to have won an award in each of the male acting categories (young actor, supporting actor and now lead actor).

Highlights from backstage in the press room:

— After receiving the lifetime achievement award, Hart spoke about how the honor made her reflect on her career as a whole and the surreal experiences she’s had. She described how during her interview with Elizabeth Taylor, she was sitting in Taylor’s living room, surrounded by framed pictures of the star’s infamous lineup of former husbands.

— Bold and the Beautiful winner Clifton was so shocked over his win that he exclaimed, “I feel like somebody made a mistake!” He also comically shared that he considered placing his award on his toilet, saying. “Every time I pee, I can be, like, ‘Aww, that was such a special night.’”

— Winner for best young actress, GH’s Lexi Ainsworth got emotional backstage as she shared how thankful she was for the sacrifices her parents made to allow her to pursue her acting career. She said she refused to cry onstage, because she didn’t want to ruin her makeup.

— Revealing that they have an ongoing family rivalry each year over their competing nominations for their respected shows, Daphne Oz and Dr. Mehmet Oz revealed what Daphne would have to do now that her father took home the coveted award. “Daphne is coming over to make ribs!” said Dr. Oz. Daphne’s response to her loss: “I’m just gonna put it out there that I demand a recount!”

— After winning for best young actor, GH star Craig said that a return to the show is not impossible and he is willing to revisit the daytime drama.

— When asked where she would store her award, winner Mansi said, “Probably somewhere [low]. I’m short and I can wake up in the middle of the night and be able to check that it’s still there.”

— Entertainment Tonight winner Nancy O’Dell revealed that as Hart left the show, the legendary host told her, “You’re the one that I would want if anyone were to fill my shoes.” 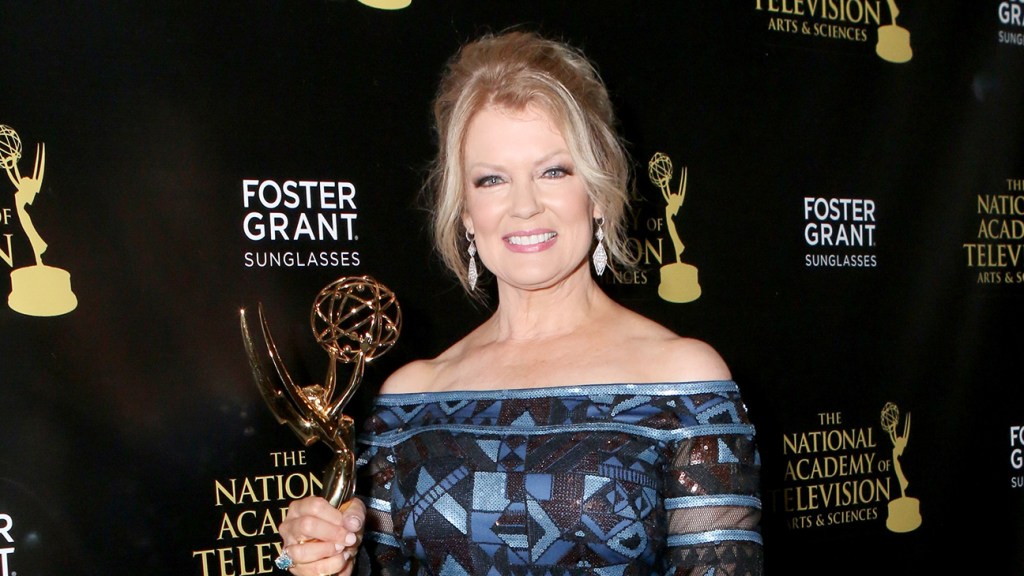