Every year around the holidays, adaptations of Charles Dickens’ A Christmas Carol surface like regurgitated eggnog at regional theaters across the country. But Jack Thorne’s retelling breathes new life into the old chestnut, creating an enchanting spectacle that really is something special. Staged with an ideal balance of sentiment and showmanship by Matthew Warchus and first seen in 2017 at London’s Old Vic, where he is artistic director, the immersive production is infused with period atmosphere and heart-stirring music, fostering an infectious spirit of good cheer that reaches giddy heights with the movable feast of the play’s climax.

Led by Campbell Scott in excellent form as the miserly Scrooge, this Broadway transfer raises the bar for seasonal stage comfort food. The collective embrace of the experience is extended even before the show gets under way, with ensemble members in topcoats and tall hats chatting with the audience while handing out cookies and clementines (“Like oranges, but British,” one of them quipped) as a musical quartet of strings and accordion plays on the stage.

Warchus, whose extensive Broadway credits include God of Carnage, The Norman Conquests, Matilda and Groundhog Day, reteams with his frequent design collaborators Rob Howell (set and costumes), Hugh Vanstone (lighting) and Simon Baker (sound), as well as composer, orchestrator and arranger Christopher Nightingale. They establish from the outset that traditional seasonal songs and cinematic underscoring will breathe emotional texture into the material, while the lantern motif — dozens of them are strung all over the theater while others are piled high like wreckage on either side of the playing space — lays the thematic foundation for a story about the illumination of a selfish, closed-off man, transformed after discovering the rewards of altruism, compassion and community. He quite literally sees the light.

Without departing too significantly from the plot of Dickens’ 1843 novella, Thorne, a Tony winner for Harry Potter and the Cursed Child, makes subtle adjustments to render the mid-Victorian morality tale more relatable to contemporary audiences, children in particular. The Ghosts of Christmas Past, Present and Future are all female here, dressed in patchwork gowns and bonnets, the first two pushing empty prams. Their manner with Scrooge is that of a mother, an aunt or a sister, their disapproval tempered by strained affection or darkened by flashes of anger, as if dealing with a troublesome child, not a stingy old man. 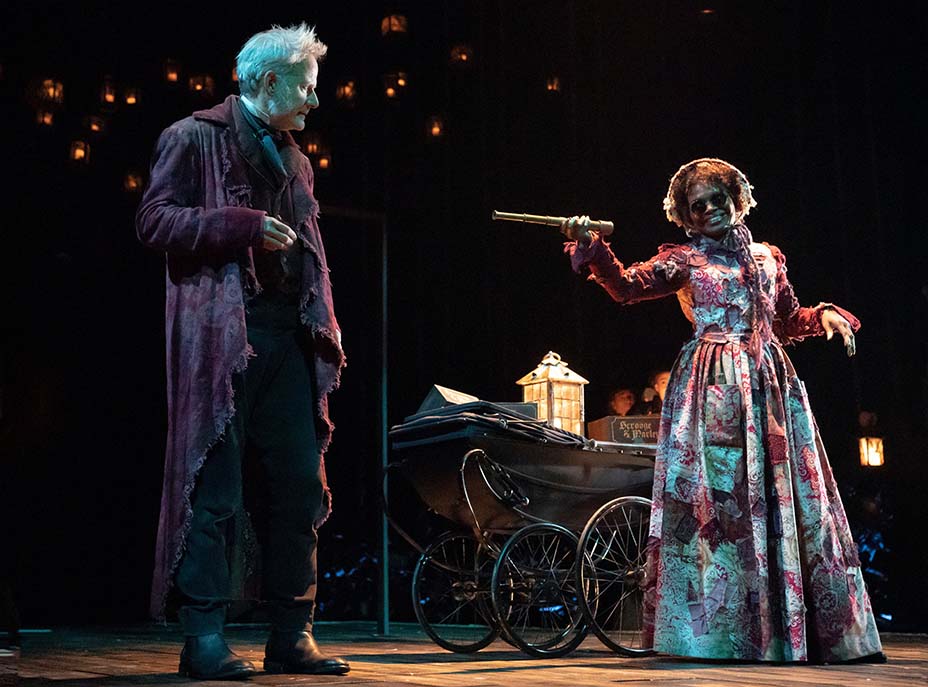 Scrooge’s own unhappy boyhood also acquires bleaker shadings, with his father (Chris Hoch) depicted as a bullying, drunken tyrant, never satisfied with the money Ebenezer sends home from his apprenticeship with the kindly undertaker Fezziwig (Evan Harrington) and even preventing the boy from showing his love for his adored sister Fan (Rachel Prather) at Christmastime.

Having the ghost of Scrooge’s late business partner Marley also played by Hoch adds dire undertones to his warning, when he returns dragging chains from the spirit world seven years after his death to alert Scrooge to the three phantom visitations coming his way to show him a path toward change. That chilling scene, accompanied by flickering lanterns, is one of many feats of theatrical magic by Warchus and his team.

Howell’s clever set features wooden strongboxes stamped with the company name Scrooge & Marley, which can be stacked to form a desk or a chair, and then stored by the greedy moneylender in trapdoor compartments in the stage floor as he resets the scene. The doors that keep the outside world at a distance from the terminally sour Scrooge are mere frames, which rise and fall with the arrival of each ghost.

Scott, dressed in a red coat reduced to dusty tatters, with a shock of white hair and mutton chops, plays effectively against his natural charm by snarling with equal scorn at carolers collecting for charity, at his overworked, under-appreciated clerk Bob Cratchit (Dashiel Eaves) and his chipper nephew Fred (Brandon Gill), the sole child of Scrooge’s deceased sister. But Scott never allows the “Bah, humbug!” misanthropy to veer into pantomime villainy, somehow always hinting at the bitter loneliness underneath. 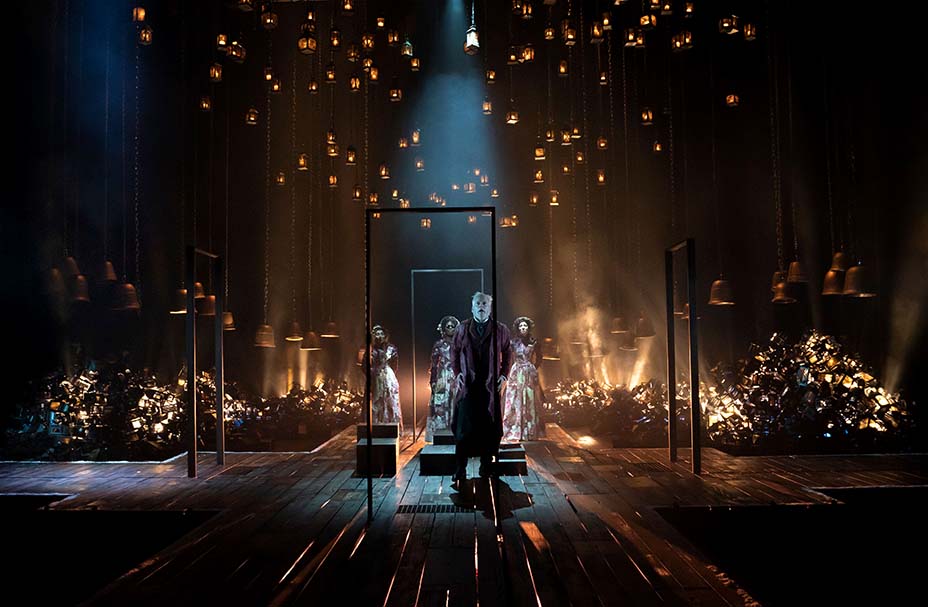 That makes his unsettled reactions to the ghosts’ lessons oddly affecting, as he angrily rejects the reminders conjured by Christmas Past (Andrea Martin) of his solitary boarding school days, with only his toys for company. His mood lightens as he relives the reprieve he found from his father in Fezziwig’s happy house, but the poignant recollections of his feelings for the undertaker’s daughter, Belle (Sarah Hunt), curdle when he is confronted with his failure to make good on his promise to her.

If Martin’s otherworldly presence is part knowing old woman, part mischievous child, LaChanze as the Ghost of Christmas Present is far more merciless about getting under Scrooge’s skin. A haughty, disdainful specter with a teasing West Indies accent, she bluntly points out the proliferation of closed shopfronts, sick beds, alms houses and crowded prisons to which his ruthless debt-collecting has significantly contributed. Scrooge self-righteously defends his strictly business attitude, but she pierces his shackled heart by showing him the death of Bob’s crippled son, Tiny Tim (Jai Ram Srinivasan, alternating with Sebastian Ortiz).

That distressing scene will bring tears to the eyes even of folks who know what’s to come in the story’s subsequent chapters. Still, Scrooge shakes off the experience with his customary bluster, proclaiming, “I will not feel guilty. I will not question myself. I am a great man,” as if determined to convince himself.

Revealing the identity of the Ghost of Christmas Future would spoil one of Thorne’s most humanizing interventions. Warchus precedes her entry with a deathly procession of veiled figures in black, with only their outstretched hands visible in the darkness. Accompanied by the sounds of howling wind and cawing crows, Scrooge listens in disbelief as people to whom he has shown no kindness speak honorably of him at his funeral. This involvement of all the key figures from his past is where the rewrite really pays off, with a steady swell of emotion that carries through the final scenes. 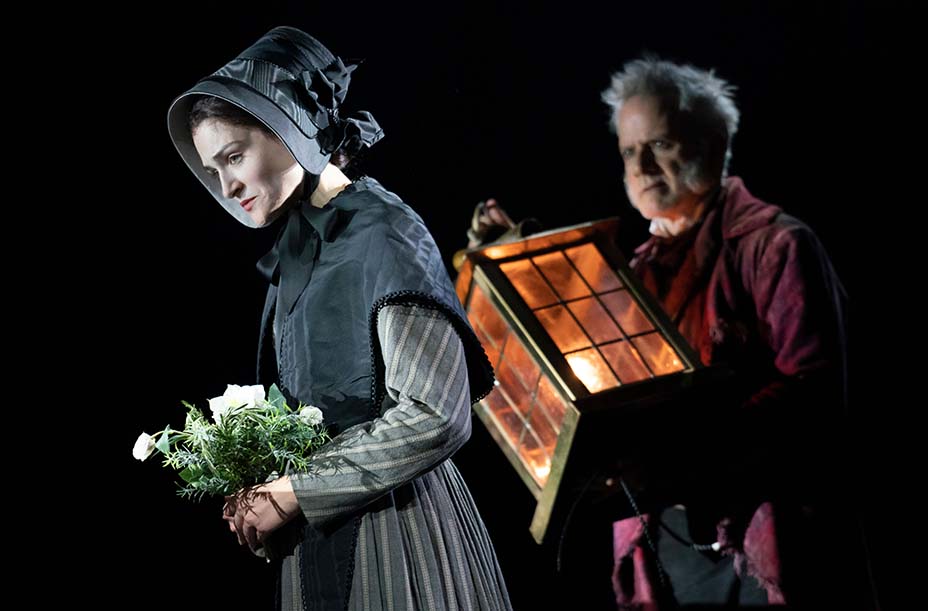 Scott deftly makes us feel for the lost soul as Scrooge regards his childhood self and blurts out in a frightened panic: “I don’t want him to be me!” His spiritual rehabilitation is complete when he calls on Belle in an encounter that is one of the production’s loveliest scenes, sorrowful and touching.

Warchus and Thorne use quintessentially English story-theater traditions to tremendous effect, frequently employing the strong ensemble to narrate plot developments in sing-song choral harmonies, and punctuating the proceedings with interludes of music and dance. The orchestra at times overpowers the dialogue, but the sounds are so gloriously soothing it would be churlish to complain. While the production never shies away from the Dickensian taste for grim misery, its theatrical coups are designed to enrapture all ages with a sense of childlike wonder and delight, not least as a very wet snowfall rains down over the audience.

Scott’s transformation becomes wildly contagious as breathless Scrooge all but explodes with excitement and the unfamiliar sensation of happiness. Enlisting the incredulous Fred in his plan, he shares the bounty of Christmas with those less fortunate, which allows Warchus and Howell to engineer a crowd-pleasing delivery system that gets the entire audience in on the fun. The production is built as much around the communal joy of the theater as the season.

In keeping with a show about the rewards of generosity, the final bow goes not to the star, Scott, but to the irresistible young actor making his scene-stealing Broadway debut as Tiny Tim. Having two boys with cerebral palsy in the role both adheres to the narrative and fits with the current industry push for inclusive casting. Tim even gets to chime the final note on a caroling bell in the exquisite instrumental version of “Silent Night” that serves as an encore. If your tear ducts don’t moisten multiple times during this captivating show, you must be missing the empathy gene.