One of the most famous exits in modern drama prompts an entrance that bristles with tension, provocation and unexpected subversive humor in Lucas Hnath’s terrific new play, A Doll’s House, Part 2. After acquiring a rising-star reputation with spiky works like The Christians, about evangelical megachurches, and Red Speedo, about doping in professional sports, Hnath makes an audacious Broadway debut with this pithy sequel. It delivers explosive laughs while also posing thoughtful questions about marriage, gender inequality and human rights that reverberate across the almost 140 years since Henrik Ibsen’s original was first produced in 1879.

Directed with stylish austerity and not an ounce of flab by Sam Gold, the play provides a corker of a role for the indomitable Laurie Metcalf as Nora Helmer, whose continued use of her husband’s name 15 years after slamming the door on her suffocating marriage is significant. Metcalf is flanked by equally rich characterizations from three actors at the top of their game, including Chris Cooper, on Broadway for the first time since 1980, playing Torvald, the man Nora left.

So why has a dynamic, highly original work that should be a hot ticket been struggling in previews to find an audience? The production is not alone, given that pretty much all the new plays and nonmusical revivals to open this spring have been under-performing. But the suspicion arises that in this case perhaps the title is a turnoff. Maybe the finite Broadway playgoing crowd feels the Ibsen drama (which won a Tony for Janet McTeer as Nora in 1997) has few surprises left to yield? Maybe people unfamiliar with the original play fear that puts this response off-limits? Or maybe the notion of a still-emerging young playwright using that classic open ending as a jumping-off point sounds gimmicky? Well, forget all those unfounded concerns right now and just go.

This taut, 90-minute single act is as much an ingenious elaboration and deconstruction of A Doll’s House as a sequel, and it stands perfectly well on its own. It’s broken down into scenes whose focus is blasted across the walls, with the name of each of the four characters appearing in giant, bright yellow, upper-case letters to indicate the various shifts in perspective. The constant throughout, however, is Metcalf’s flinty Nora, who opens the play knocking on the same door she closed behind her all those years ago when she went off to find herself. 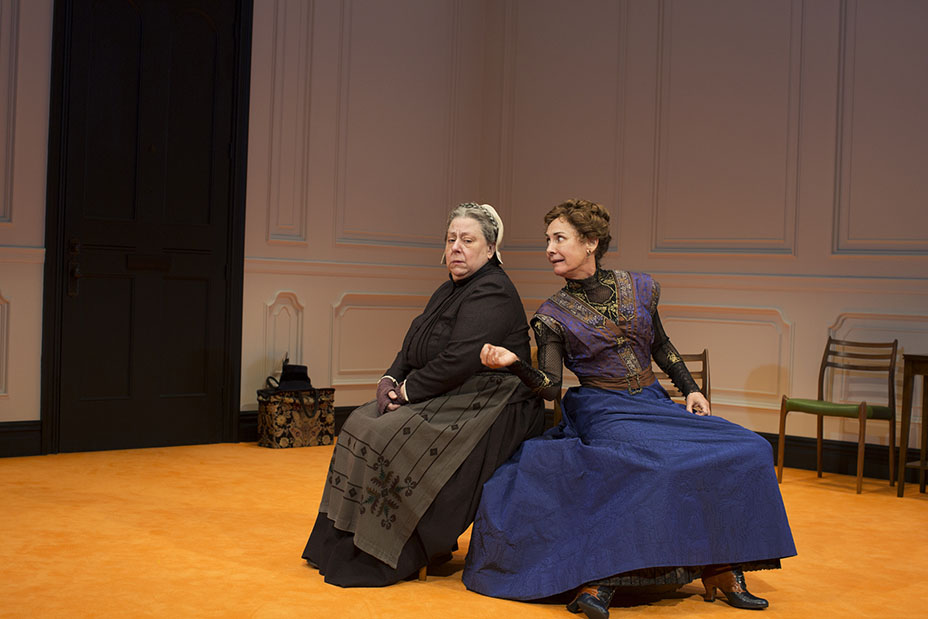 Anyone who has seen Ibsen’s masterwork has probably wondered what the future held for Nora, a woman infantilized her whole life, who bucked against a society built around the constricting laws and judgments of men. In Hnath’s conception of her, she’s done very well, thank you. Metcalf makes her tickled pride clear when her former nanny, Anne Marie (Jayne Houdyshell), takes in her smart suit and accessories with an admiring eye. “It looks like you’re definitely not destitute,” she says. Echoing the audience’s curiosity, Nora presses the older woman on what she thought happened to her after she left. She practically beams with satisfaction when Anne Marie admits she imagined her struggling, while the rest of the town apparently assumed she was dead.

It quickly emerges that Nora has had considerable success as a writer, working under a pseudonym penning popular fiction about women just like her, who desire to be more than some man’s dutiful plaything. One of her books has sparked controversy by prompting wives to abandon unfulfilling marriages, including the spouse of a judge now threatening to sue her. To Nora’s surprise, the judge has informed her, Torvald never filed for divorce. And given that it’s illegal for married women to conduct business in 19th-century Norway without their husband’s consent, the judge now has the means to ruin her.

So the thrust of Hnath’s play is quite simple: Nora has returned to ask Torvald to honor his agreement to divorce her. She seeks a strategic ally first in Anne Marie, who chafes at being put in an awkward position, then directly makes her case to the intractable Torvald, who has more reasons than just churlishness to refuse, before following Anne Marie’s suggestion and attempting to enlist her persuasive daughter Emmy (Condola Rashad) to bolster her argument.

Structurally, the play is predominantly a series of two-character exchanges, and although that might have become monotonous in less assured hands, here they have the energy of a vigorous squash tournament. That sport could almost be played in designer Miriam Buether’s boxy front room, a cube constructed at an angle so that one corner juts out into the audience. That provides a platform for each of the characters to step forward and directly engage us as they debate various points, beginning with Nora’s impassioned lecture on the invalidity of marriage as an institution, which she confidently predicts will be obsolete within 20 or 30 years.

While that bold pronouncement gets a laugh and might be interpreted as Hnath mocking Nora’s arrogant certainty, the playwright also has her score plenty of points about the obstacles women are up against in terms of social conditioning and traditional couple dynamics. The play displays real intellectual curiosity, asking challenging questions about the purpose of marriage and the perception that a woman who puts her own needs above her children’s is violating a sacred pact — whereas a man who does that barely raises an eyebrow. Metcalf contributes with her fearlessly abrasive style, almost encouraging us to view Nora as selfish while the play simultaneously needles us as to why we consider her to be so. 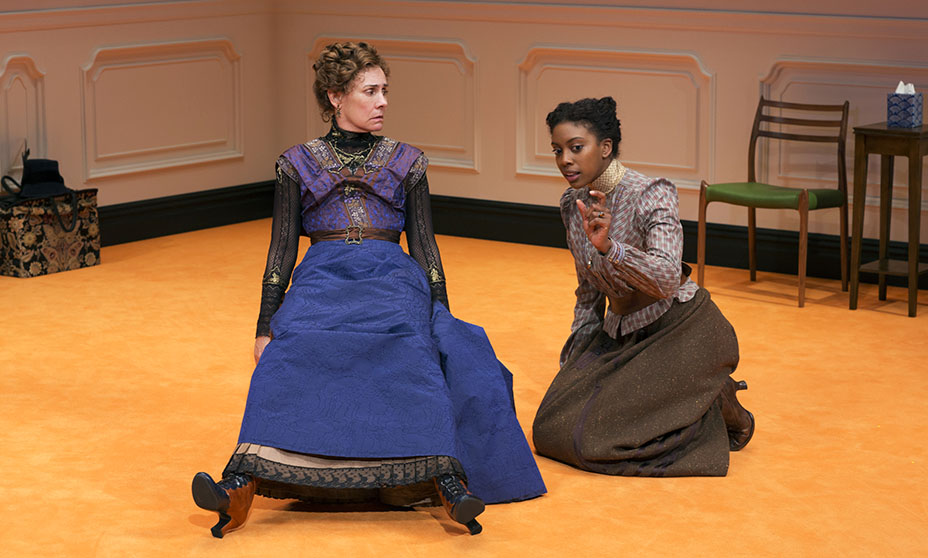 All this takes place in a single, sparsely furnished room in which all traces of Nora have long been removed, like cancer. It’s more or less period-appropriate, and the characters are handsomely costumed by David Zinn in the corresponding manner. But visual clues link the past to the present — the chairs look more mid-20th-century Scandinavian modern; Nora drinks bottled water; Anne Marie reaches for a box of Kleenex to dab her sniffles — and the characters’ dialogue and physical attitudes are completely contemporary. The sparing use of profanity is especially delicious. Hnath shows a superb knack for balancing humor — from the droll to the uproarious — with serious issues, and what makes the play so satisfying is that all four characters are given a distinctive point of view.

That goes for Anne Marie, who gets quite salty about being taken for granted or manipulated, and justifiably defensive about the sacrifices she had to make concerning her own children. This plum character role seems tailor-made for the priceless Houdyshell (a Tony winner last season for The Humans), who lands many of the play’s biggest laughs. No less rounded is the preternaturally mature Emmy, played with poise and quicksilver intelligence by Rashad as a blissfully uncomplicated young woman utterly sure of herself, revealing firm views about marriage that startle her mother.

Even Torvald is portrayed as a reasonable man, once he gets past his shock, his bitterness, his wounded vanity and the 15 years’ worth of repressed anger he’s reluctant to own. “I think you’re just outside of it, looking at it like it’s some interesting thing,” says Nora of his anger in a snippy, prodding exchange worthy of Martha and George. Cooper quietly fumes before letting loose in a rip-roaring fight toward the end that provides tremendous catharsis. Only then do Torvald and his estranged wife reassess one another in light of their respective experiences, finding traces of their long-ago affection.

All four roles are a gift for resourceful actors, suggesting that however the play ends up doing on Broadway, it’s going to be widely produced. (South Coast Repertory, which commissioned the work, is presenting a simultaneous premiere run.) In Gold’s zesty staging, the lightness of touch in the writing carries through to the direction and performances, nowhere more so than with Metcalf, whose live-wire presence makes Nora wily, sharp, proud and staunchly unapologetic. She’s also hilarious, her face a rubbery mask with an inexhaustible range of reactions. But while gender politics has seldom been this amusing, there’s also genuine poignancy behind her words as Nora describes how hard she had to struggle to be able to hear her own voice.

With unfussy eloquence, A Doll’s House, Part 2 asks how much, in a century-plus, life has changed for Nora and women like her in a world that often still has firm ideas about where they belong.