To make Disney’s reimagining of Pete’s Dragon, David Lowery and his wife relocated from Texas to Los Angeles — reluctantly. “I did not want to leave and was very, very conflicted about just getting in the car,” he recalled to The Hollywood Reporter. “I’m someone who is very sentimental and nostalgic and attached to the homes I lived in, and I think moving is a traumatic experience.”

Lowery then combined his location-based love with a long-gestating idea and wrote the first draft of A Ghost Story in a single day. Though the A24 drama — which stars Casey Affleck as a bed sheet-covered ghost who haunts the home he once shared with his wife (Rooney Mara), and first premiered at Sundance — was shot in Texas, where Lowery now resides permanently, the intimate indie also helped him embrace the transience that filmmaking often requires. “It’s tough for me to move on from places, even though I realize that it’s not only necessary but very important to be able to do so. Making this movie was a great way to work through that — to do a little therapy, figure out why physical spaces matter so much to me and learn that I need to lessen my grasp on them from time to time.”

Ahead of A Ghost Story’s release Friday, Lowery spoke with THR about directing a completely covered actor, adding that Kesha cameo and grappling with his own thoughts on death. Below are excerpts from the conversation.

Why did you opt to cover Affleck in a bed sheet?

That image has been something I wanted to employ for quite a few years, and I just didn’t have a movie to put it in. It’s a strong image because it’s something we associate with childhood and Halloween. There’s a naivete to the image, and a charming, handmade quality to it. At the same time, it represents a ghost — someone who has died and cannot leave Earth for whatever reason. There’s so much meaning behind this very simple childhood image, and I loved the idea of taking that image and restoring some gravitas into it.… It’s a goofy image, it’s funny and it’s OK to laugh at it, but our goal was, if we play it just right, audiences will know it’s OK to laugh but then, after a certain point, recognize it’s a character in the movie. The sheer minimalism of this image starts to have an eerie effect that belies the goofy origins of it. 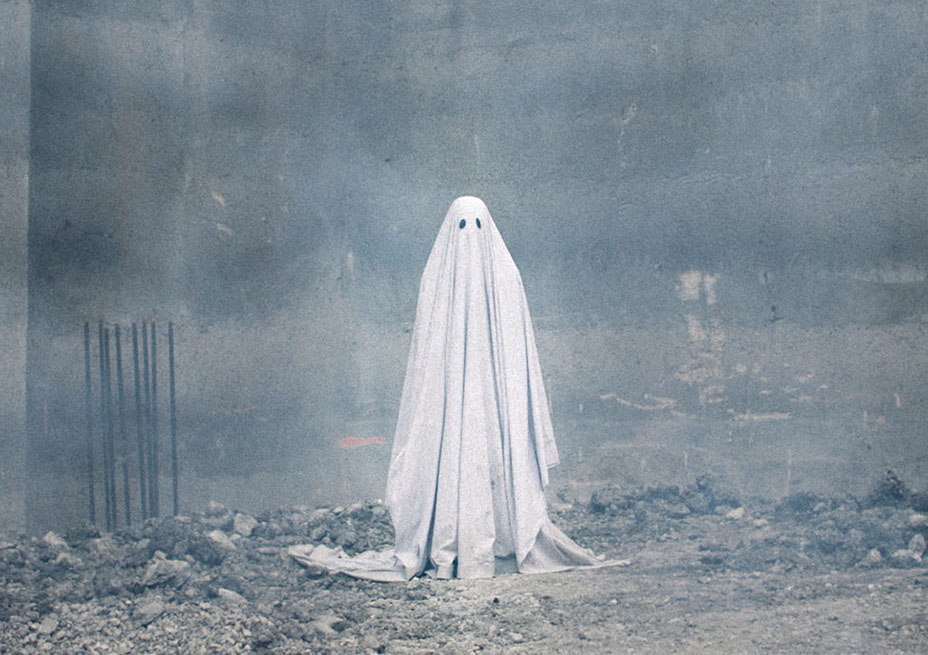 How do you direct someone who is under a sheet?

It’s funny, we thought initially that Casey would get to use a lot of body language and really sell himself underneath the costume, but in the first couple days of shooting, it just wasn’t working. It felt too much like somebody wearing a sheet, and every unique physical trait as a human being was pronounced and exaggerated by this sheet over his head.… It didn’t have an ethereal quality, and we still wanted it to feel like a ghost. Gradually, we ironed out all of that performance, and all the “actorly” traits had to be removed, and it became a matter of patience and posture and moving very specifically, slowly and rigidly. It was more a case of me saying, “Turn your head to the left,” “Hold still” and “Walk forward.” Because the costume is so simple, once we stopped trying to have him move too much and “act,” all of a sudden it takes on this emotional quality because it’s so still and nothing is happening, and you start projecting the context onto that very blank face. That was a profound moment on set, when we realized we don’t have to have him do that much for the ghost to actually work.

What went into the design of the sheet?

The initial concept was, “We’re just gonna get a bed sheet, cut two holes in it, and throw it over Casey’s head.” We tried that — not with Casey, thankfully he wasn’t there yet, he would’ve probably quit if he realized how dumb that looked — and we realized that what works for a seven-year-old on Halloween will not work for a feature-length film about a ghost. We were trying to make a 3D version of a drawing of a sheet over someone’s head, which is a defined arc with two very symmetrical holes for the eyes. It was way trickier than we thought.

'A Ghost Story' Trailer: Casey Affleck Is Stuck Under a White Sheet With Eyeholes

My costume designer Annell Brodeur experimented with fabric for the sheet, which wasn’t even a sheet — a king-size bed sheet will not cover a human being — and had to have a certain weight to that the folds would hang in just the right way. [Affleck] had to wear a lot of petticoats underneath the outfit and a head mask, otherwise the face just falls apart.… Beyond that, it required some puppeteering so that when he’d turn his head or sit down or look up, the eyes would stay in the same place and not get too droopy. Sometimes it’d bunch up all of a sudden on his face and he’d look like an elephant with a trunk! A lot of the time, our costume team hid just below frame to keep things in place, so the face would maintain that very simple quality that nonetheless is very emotional.

What about death and grief did you find yourself exploring in this movie?

I think all people are familiar with thinking about their death, and trying to come to terms with the fact that we will, at some point, no longer exist. The loss of one’s ego is very tough to reconcile with; you really have to do a lot of mental gymnastics to wrap your head around the idea of just not existing anymore. If you believe in an afterlife, that’s a way to get beyond that, and that’s beautiful and wonderful. But if you don’t, just the idea that you’re not gonna exist anymore is troubling. This movie was a way for me to say that, if I’m going to be open to the idea of there not being an afterlife — and just being open to the idea is important to me — I need to be OK with that.

In terms of the grieving process, as I get older, and my parents and the people I grew up with get older, it’s something I think about a lot. But what I project onto my ideas of grief is my idea of them being gone from my life. Again, that’s just my own ego getting in the way of something that’s very natural and gonna happen to everybody. I spent a lot of time trying to think about what it’s like for somebody else, rather than what’s left behind, which is me and all the people who will be grieving. What about them and the individuals that are moving on? That experience is so personal and private. I’ve read a great deal and tried to get myself in the mindset of understanding what people go through on both sides of that equation, but I was really interested in the idea of removing my ego from that equation. Especially in the Western world, so much of our cultural ideas about grieving is about us, and I think it’s important to get beyond that sometimes. I’m still figuring out what all of this means to me. 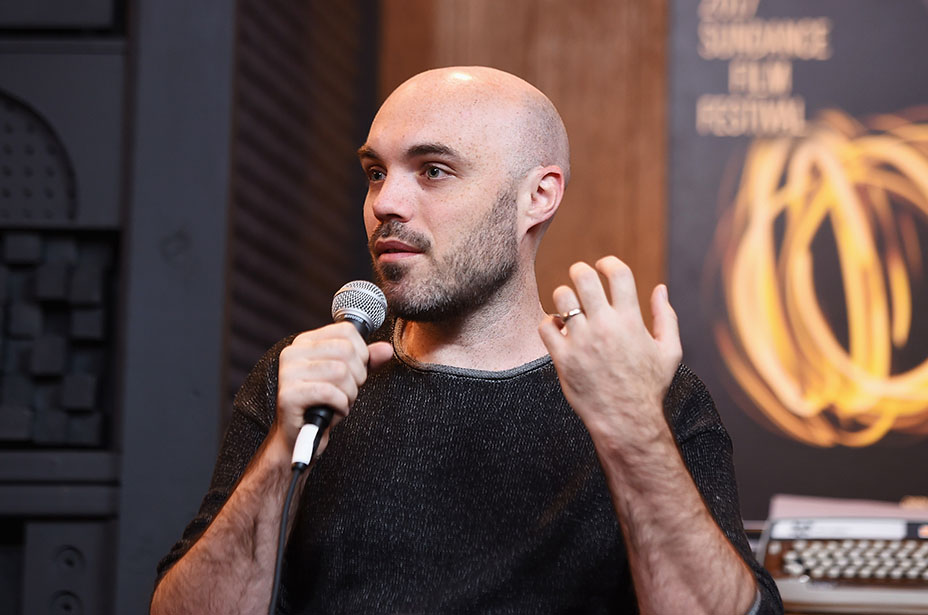 It’s a pleasing image to me. I particularly love it in modern films because all our means of viewing films these days are rectangular. When you watch a 1:33:1 movie on your TV at home, it’s gonna have black bars on the side and I like that — it provides a proscenium that you view the movie through. This film felt particularly well-suited for that because it’s about someone basically trapped in a box for eternity, and I felt the claustrophobia of that situation could be amplified by the boxiness of the aspect ratio. Then we curved the edges a little to make it feel like an old slideshow or family photograph and add a touch of nostalgia.

Kesha makes a cameo as a character credited as Spirit Girl. How did that happen?

I just love Kesha! That’s really where it came from. I wanted to have one of her songs in the party. That turned into, I wonder if she’d write an original song for the party, which then turned into her just coming to Texas and hanging out on set for a day and showing up in the movie. She did in fact collaborate on the song that plays in that sequence, which is a dream come true. Her music makes me feel alive in a way that other music doesn’t, and I love her spirit and what she represents. Even though it’s a small part and some folks don’t even realize it’s her, I love knowing that she’s there. It adds something very meaningful to me.