Veteran publicist Jeff Abraham spends his days pitching stories, coordinating interviews and developing strategies for a roster of clients at Santa Monica-based Jonas Public Relations. As a senior account executive, his specialty has long been comedy. Abraham represented George Carlin for the last 11 years of his life, and more recently helped boost the launch of the National Comedy Center in Jamestown, New York.

There’s nothing funny, however, about his surprising new side project. Abraham has teamed with longtime pal Burt Kearns to write a book for which they investigated a rather macabre show-business phenomenon — the onstage demise. Their collaboration, The Show Won’t Go On: The Most Shocking, Bizarre, and Historic Deaths of Performers Onstage, hit shelves Sept. 3 courtesy of Chicago Review Press.

The Hollywood Reporter caught up with Abraham and Kearns (ahead of a scheduled presentation at the Dearly Departed Museum in Hollywood on Oct. 19) to get the backstory on how the book came together, how the duo helped set the record straight on the infamous death on Dick Cavett’s talk show and why one of their friends called the tome “truly, a celebration of life.”

Whose idea was it to write a book about death? Particularly death onstage?

Abraham: The idea came to me 15 years ago this month after I’d attended an Elvis Presley tribute show at a Trump Casino outside Palm Springs. One of the special guests was Al Dvorin. Al was the man who popularized the phrase, “Elvis has left the building.” He’d worked for Col. Tom Parker for years and got the job of announcing that at the end of every concert to clear the room. After his spiel was included on Elvis’ Madison Square Garden album in 1972, Al developed a fan base of his own. After the show, he was signing autographs and I heard someone say, “Al, you should write a book!” Al replied, “I know. I have time!” The next morning, on the drive home to Las Vegas, he was killed in a car crash. I woke up to that news and seriously, it affected me. At the same time, I thought it would make a great book. Stories of performers who died on the way to a show, or on the way home, or onstage, I came up with a title: The Show Won’t Go On. I carried that around in my head for 12 years. Then I mentioned it to Burt.

Kearns: Jeff and I have been friends for 20 years. We met when he was publicist for my book, Tabloid Baby. We bonded over a love of show business and Jerry Lewis. Jeff mentioned the idea in early 2016. I said, “That’s great. I have an opening in my schedule. Let’s write it. Let’s not talk about it. Let’s do it.”

What was the first death you investigated?

Abraham: Well, first we started collecting the stories. From newspapers, libraries, journals, books, films. We compiled the news stories of performers who died on the way to a show, on the way home from a show.

Abraham: … Edgar Bergen and Pat Henry, who died in their hotel suites during engagements at Caesars Palace. And, of course, the ones who died onstage. There are the legendary deaths like Tommy Cooper, Dick Shawn, “Dimebag” Darrell Abbott, but for every well-known death onstage, we found five similar or connected deaths. We wound up assembling an archive of hundreds. Literally hundreds of performers who died onstage — I think the earliest was in 1600.

Kearns: 1597. The magician Coulen. He was attempting a “Bullet Catch,” when his assistant got angry and bashed him over the head with his pistol.

Abraham: Anyway, Burt realized we had to narrow it down. We have more than enough to focus simply on people who died onstage. And even that was too many.

How did you focus on what tragedies to cover?

Kearns: We had to narrow the field, and then offer variety. We knew we wouldn’t include athletes or bullfighters, people who enter an arena knowing that death is always a possibility. But we included circus acts and some daredevils because they consider themselves to be performers, show people. When the original draft of the book became too unwieldy, we decided to concentrate only on performers who died in front of a live audience — in a theater, an arena, a festival, on the radio, live television and, of course, social media.

Death on film has long been a macabre fascination for some audiences. As you investigated this world, how did it affect your mental health — or did it?

Abraham: Some of these stories can give you nightmares. But we had a different attitude toward the subject. We considered dying onstage to be a glorious, wonderful way for a performer to go. We focused on the lives and careers. And when we spoke to friends and family members, we set out to answer the question, “Do you find comfort knowing they died doing what they loved?” We got some very interesting responses.

Kearns: Our friend Kliph Nesteroff nailed it. He said our book is “truly a celebration of life.” We’re telling stories of performers’ careers leading to the ultimate prize. But instead of an Emmy, Grammy, Oscar or Tony award, each journey it leads to their final moment. Onstage.

How hard was it to find witnesses or family members and get them to cooperate?

Abraham: It wasn’t that difficult at all, really, once we located them. We found that children, siblings and other survivors want these stories told. They want their loved ones to be remembered for their accomplishments, more than for the way they left the world.

Kearns: We tried to honor that. And it gave us — it gave me — a sense of responsibility. We spoke to people who witnessed the loss of loved ones onstage only months earlier. And more than once, I interviewed the relative or friend of a performer who died more than 35 years ago, and that person would begin to weep. There was a lot of laughter and fond memories, but there were tears. It made us remember these are not fictional characters. These are real people. And their deaths had profound impacts.

Abraham: The death of J.I. Rodale, the natural foods advocate and longevity expert back in 1971, is the most legendary death on a live television talk show. Dick Cavett once said that someone comes up to him at least once a month to say they’ll never forget watching it. He’ll ask, “Were you in the studio audience? Because the episode never aired.” They ran a repeat that night. The video has been locked away for almost 50 years. Cavett has a copy which he can only bring himself to view on very few occasions. Burt and I were the first authors, the first civilians to view the entire 90-minute episode. And Dick Cavett commented for us exclusively. For that, we thank my dear friend Robert Bader, who works very closely with Cavett. He’s vice president of Dick Cavett’s production company. He promised that if we got a publishing deal, he’d let us view the episode.

Kearns: And not only view it but record the audio. So, we have the first detailed transcript of what transpired. And we found that there have been many misconceptions about what was said and Cavett’s immediate reaction to the tragedy. We’ve cleared that up and set the historical record straight.

Borrowing from your title, what death covered in the book did you find to be the most shocking?

Kearns: We interviewed Penn Jillette about that. He and Teller are the definitive masters of the “Bullet Catch” and he offered some very important advice to future would-be bullet catchers. Should I give it away?

Abraham: Go for it.

What about the most bizarre?

Abraham: I’d say that’s a tossup between the pop star who was bitten onstage by a king cobra and continued dancing until the venom reached her heart, and the kid who performed an original song at an open mic night and capped it off by a plunging a knife into his own chest.

Kearns: I might file that one under “most shocking.”

You added a section about social media. How has tragedy played itself out on social media?

Kearns: There have been many deaths captured live on social media platforms — suicides, murders, police shootings and stupid stunts performed by attention-seeking amateurs. Again, we had to separate those deaths from actual performers who have thousands or millions of subscribers. It ranges from the wing suit jumper who plunged to his death on Facebook Live to Christina Grimmie, the YouTube singing star who went on to The Voice on NBC and was shot to death by a lunatic at a meet-and-greet to news reporter Alison Parker, who was shot to death on live television by a former co-worker. He uploaded everything to his social media accounts. They called that the first “social media murder.”

Abraham: The thing is, people keep dying onstage or in front of audiences. On our website, we’ve got more than a dozen this year alone. So far.

Kearns: Most bizarre is this morning. We woke up to find two deaths onstage over the weekend … both connected! A drummer named Tim Currie, leader of a Motown tribute band, died performing onstage on the green in Norwalk, Connecticut. Hours earlier, they’d cancelled a concert by a Chicago tribute band at a nearby beach because the bassist and leader died onstage in Long Island the night before! His name was Mason Swearingen, and he also put on a show called Chicago Meets Motown!

Abraham: You can’t make this stuff up.

And lastly, how did writing a book about death affect your feelings about your own mortality?

Abraham: It makes us remember that life is precious. While we were in the final stages of the publishing process, I lost my father. Burt lost one of his best friends. We’re both very aware that life is short.

Kearns: And we both agree that we wouldn’t mind dying doing what we loved. As long as it’s not too soon. 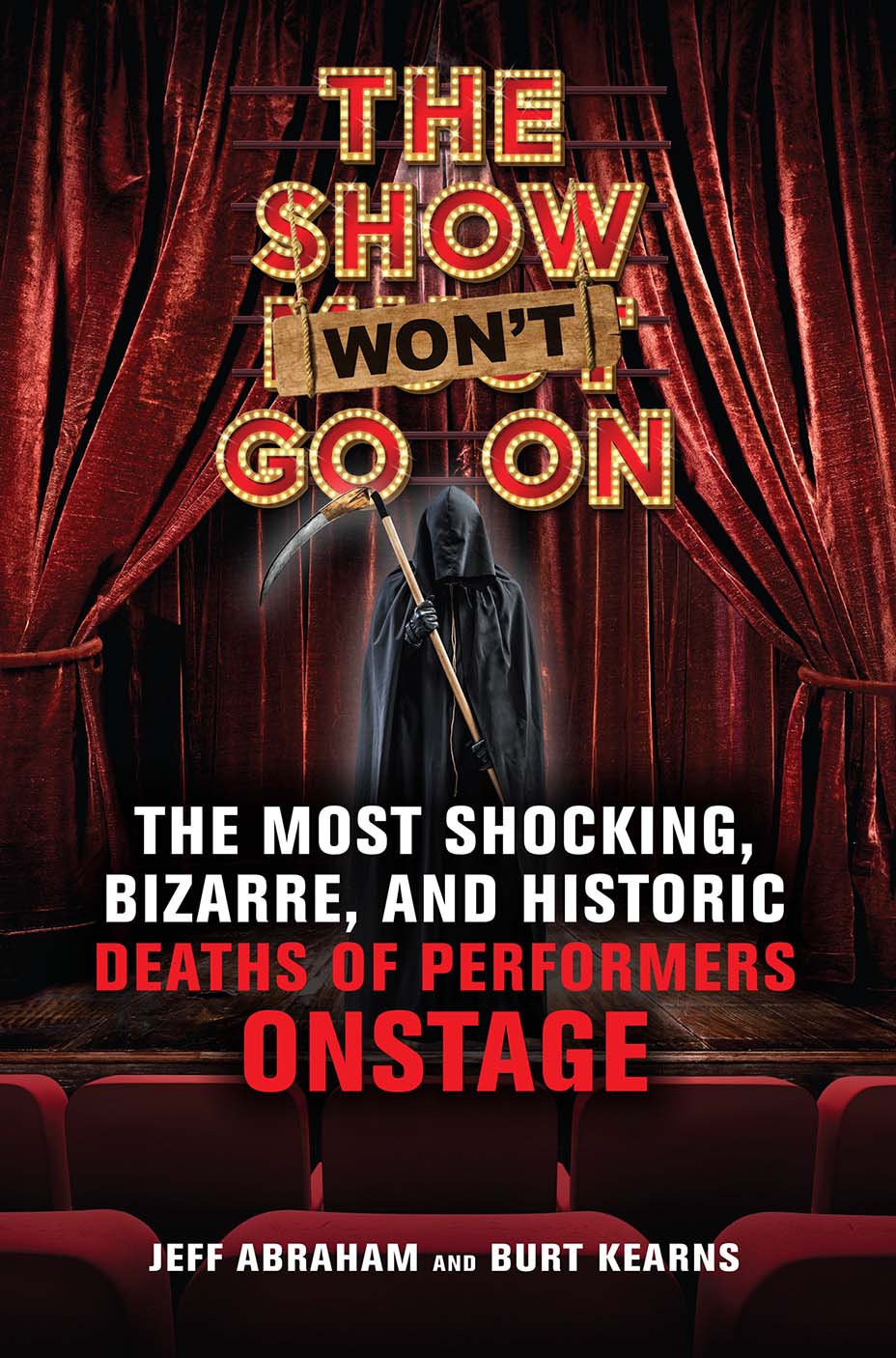