When Twin Peaks fans come to North Bend and Snoqualmie — the two real-life Pacific Northwest towns that serve as stand-ins for both the original and rebooted series premiering May 21 — they’re searching for Lynchian quirkiness: a place as quaint as cherry pie but with a sinister underbelly. In truth, the Snoqualmie Valley is more like small-town America for the REI set, who take to the mountain trails and rivers in droves. We do, however, have some pretty good pie, if I say so myself, as an L.A. food writer who started splitting my time up north in 2013.

When David Lynch and Mark Frost set out to find the location for the show that first aired on ABC in 1990, they landed 30 miles east of Seattle — not “5 miles south of the Canadian border, 12 miles west of the state line” as Special FBI Agent Dale Cooper, played by Kyle MacLachlan, tells his tape recorder in the original pilot. The Cascade Mountain foothills had everything Lynch and Frost were looking for in their fictional town: a sawmill, a diner near train tracks, giant trees, a grand hotel perched on a hill overlooking a waterfall. “It was a really weird moment of synchronicity,” Frost has said of the discovery. 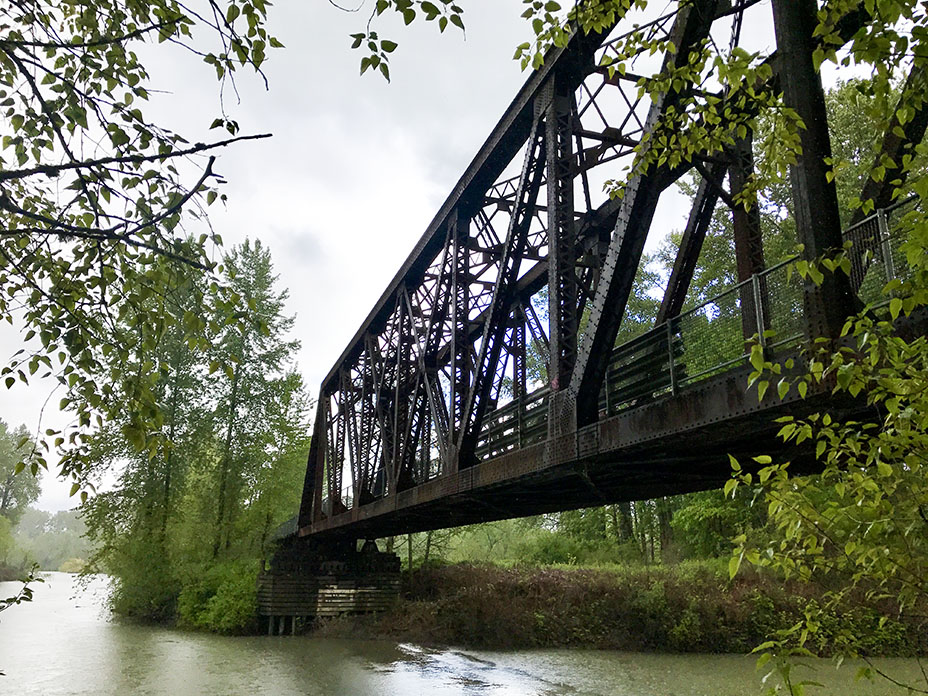 A lot has changed since homecoming queen Laura Palmer’s demise: During the last 25 years, both Snoqualmie and North Bend have grown as bedroom communities for Bellevue and Seattle, complete with gorgeous million-dollar mountain mansions owned, say locals, by Amazon and Microsoft commuters. According to the North Bend Visitors Information Center, about a third of walk-in tourists inquire about the series’ locations, lore and celebrity sightings annually; the numbers are expected to double during the 18-episode run this summer, especially during the Twin Peaks festival that takes place from July 28 to 30, through Twin Peaks Day every Feb. 24.

Today, North Bend and Snoqualmie completely capitalize on the stardom. From the cafes to the gift shops, references to cherry pie, Agent Cooper, owls and the Great Northern Hotel are everywhere. Shelly Woodward, owner of Selah Gifts in downtown North Bend, started carrying Twin Peaks mugs, magnets and cards around 2008 because so many visitors were requesting it, and no one else in town had any. “The stuffed logs are the most popular,” she says, referencing the beloved Log Lady played by Catherine E. Coulson in the first and second seasons.

A few doors down is Twede’s Cafe, the stand-in for the Double R Diner, where Agent Cooper eats cherry pie and drinks coffee “as black as midnight on a moonless night.” Lynch and Frost filmed on location for the original pilot, but moved to a replica built on a Los Angeles set for the rest of production. I can honestly say that Twede’s, the only place to find a “Welcome to Twin Peaks” sign, a mural in the back parking lot, is great for big breakfasts, but it isn’t pie heaven. The filling is canned, the crust is more like shortbread than buttery and flaky. But pie is pie; they sell a lot of them. I do wish they’d serve David Lynch’s own organic, full-bodied coffee instead of the watery stuff poured into those black Twin Peaks’ mugs, though. 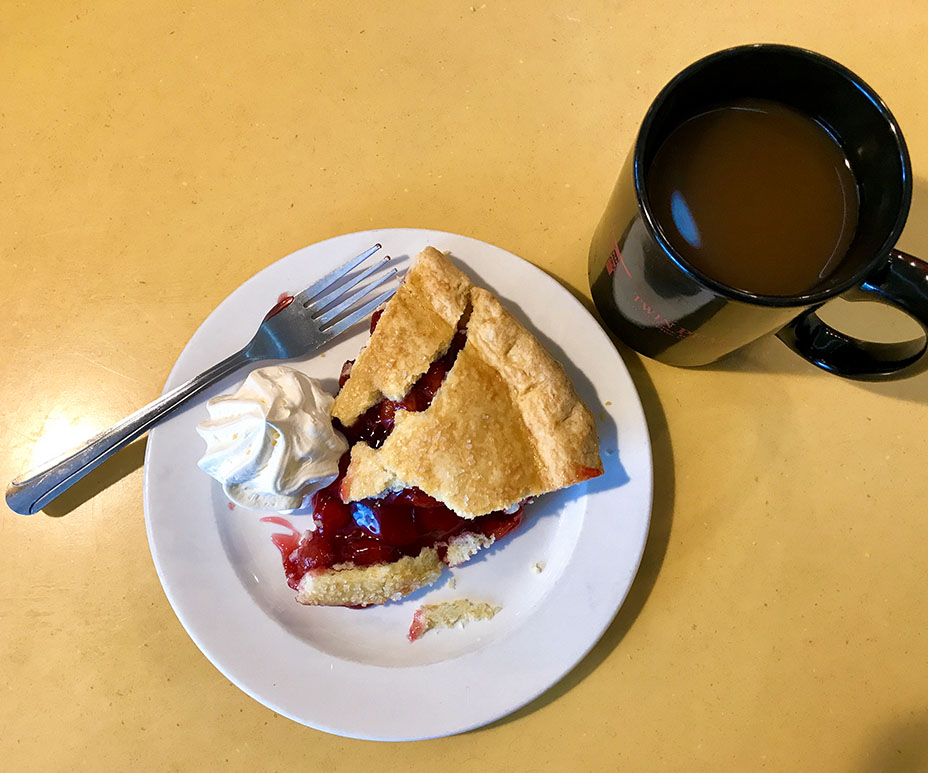 A better cherry pie is found at Georgia’s Bakery next door. Locals say that these are the pies that were used as stand-ins for the ones Agent Cooper eats at the Double R in the new season. Georgia’s is also where you can get soft, pillowy glazed doughnuts, like the kind Lucy stacked on the table for Sheriff Harry S. Truman, including one signature version that’s the size of your head ($6).

For Peaks devotees, Snoqualmie is the epicenter, with such must-stops as the Salish Lodge (6501 Railroad Ave.,425-888-2556), aka The Great Northern, with the magnificent 270-foot Snoqualmie Falls beneath it. With its 100-year-old Country Breakfast — a four-course feast that includes juice, coffee, steel-cut oats, pancakes, eggs and various meats, biscuits and pastries for $36 per person — it’s one of the most popular destinations in Washington. True fans grab one of the Lodge’s printed maps that include the former Weyerhaeuser mill office building, which stood in for the Twin Peaks Sheriff’s Department, and still stands today, accessorized with a prop sheriff’s truck parked outside for the ultimate Instagrammable moment. More social-media fodder: the “giant log,” a hunk of a 400-year-old Douglas Fir that appeared in the original opening sequence, which sits under an open shed in old town Snoqualmie, just a short drive from “Ronette’s Bridge,” where Ronette Pulaski wandered after escaping the killer. 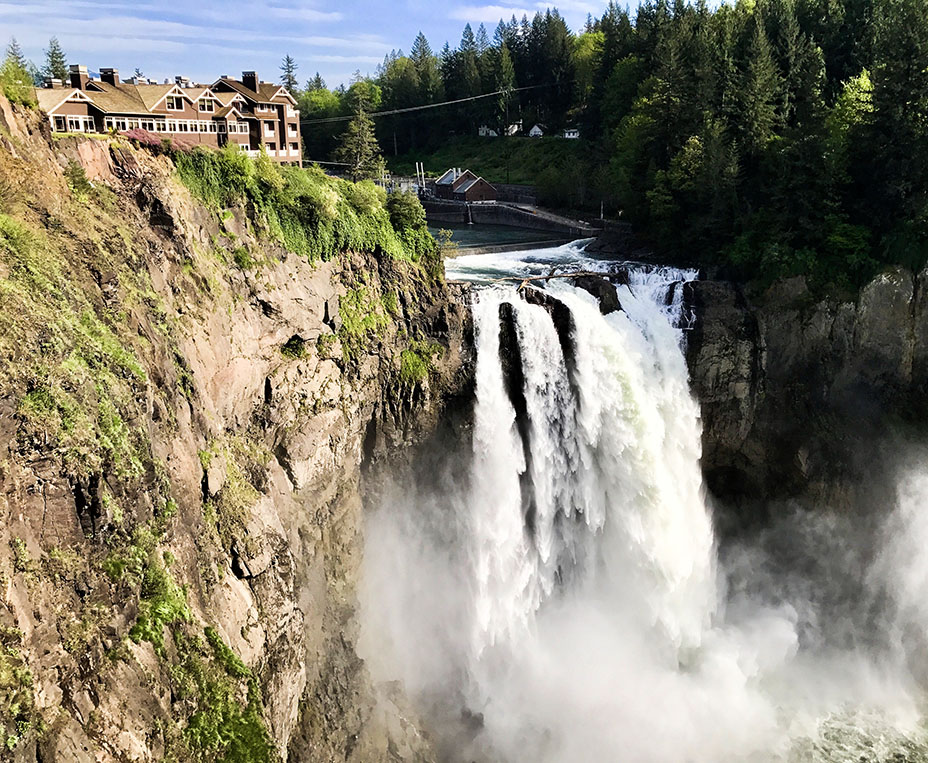 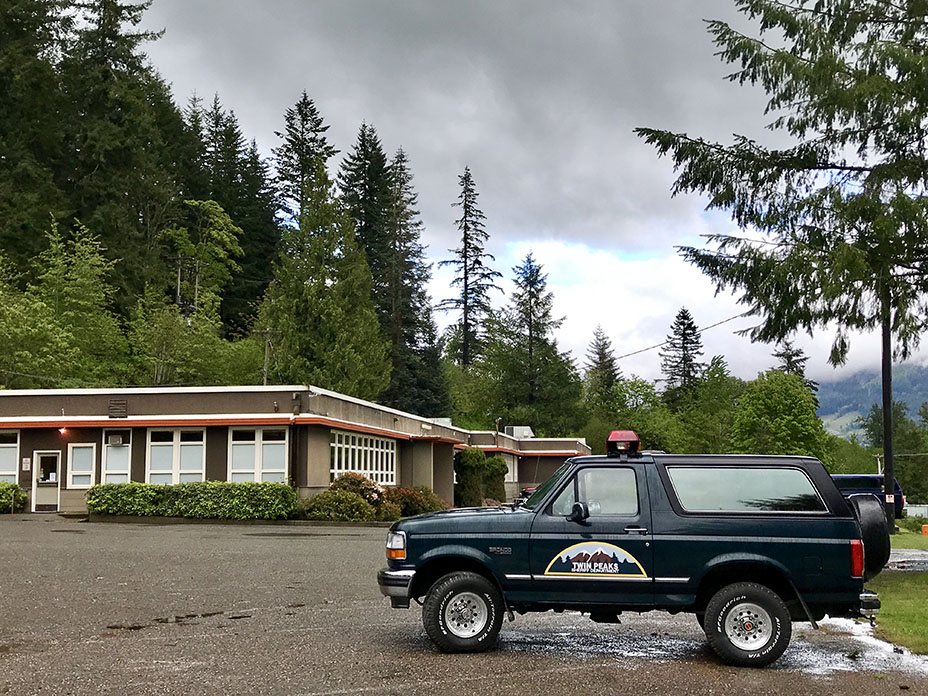 Locals, especially those too young to have seen the original series air, are anticipating the new installment’s premiere with sold-out watching parties planned in both North Bend and in Snoqualmie. I’ve been driving the backroads with the haunting soundtrack on my car radio in preparation. I can’t wait to be reacquainted with the cast of characters and spirits that lurk in the among the Twin Peaks trees.